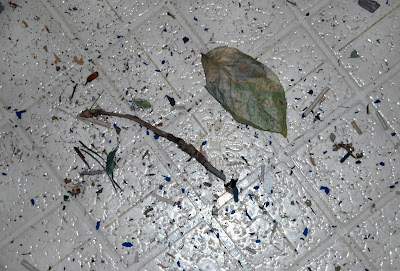 In my last post I mentioned there was a bounty on caterpillars. I said that because there are just SO many out right now. So I took the 12 gauge and 22 to see what I could get. After shooting a bunch, I brought them home and spilled my "catch" out on the floor. This was all that was left. I decided it might be better to hunt them with a camera instead! 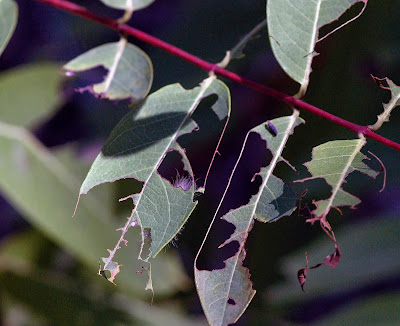 I went to an Oak dominated woods and found a dozen species along a single path. Besides oak and hickory, one should check the leaves on every type of plant. The clue is to find leaves that have been chewed on like this. The plant is Dogbane or Indian Hemp, Apocynum, a Milkweed relative. Right in the center I could see the possible suspect peeking through. 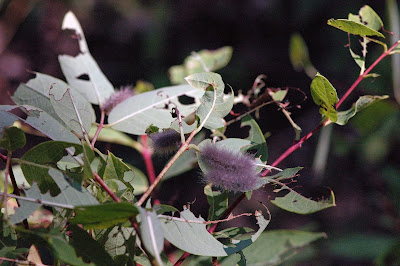 Upon lifting the leaves, I could see at least four fuzzy caterpillars. 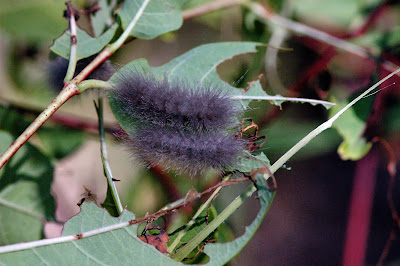 This is Cycnia tenera, the Dogbane Tiger Moth. Sometimes it's referred to as the Delicate Cycnia. Most of the larvae I find are this dark gray, but this species may also be much lighter in color. A couple years ago I posted on Tiger Moths and other caterpillars. These are all recent shots, and include a number of new and different families. 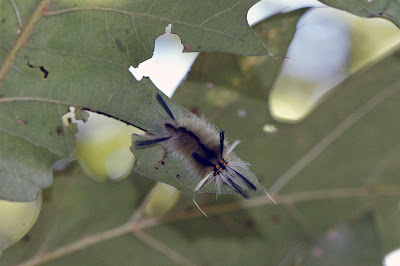 The Pale or Banded Tiger Moth, Halysidota tessellaris. This is another species that is currently very abundant. You'll often see them on the ground, as they frequently fall from the trees above. This caterpillar ranges from white to yellow to brown. Two features I use to make sure what species it is, regardless of color. The orange marks in the head region are on most but not all forms. 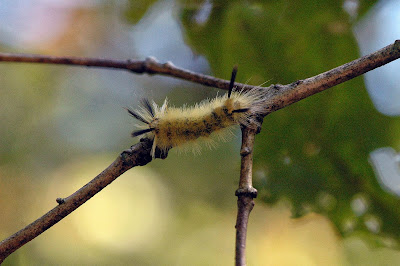 More reliable are the mixture of black and white hair tufts. This yellow form I commonly see on twigs in the winter, stiff as a board. They are not frozen, but parasitized. I hope to do a post in the future on insect mummification. 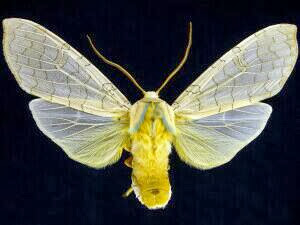 This photo from Jim Vargo illustrates the adult. A pale yellow moth with two blue stripes on the thorax.  The adults look identical to the Sycamore Tiger Moth. Genitalia dissections are required to separate them. 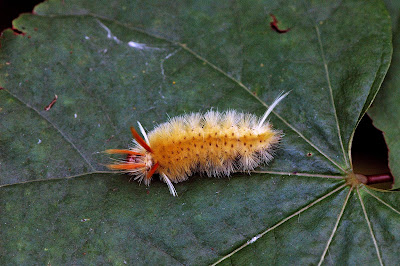 This is the larva of the Sycamore Tiger Moth, Halysidota harrisii. They have the same fuzzy hairs throughout, but the main tufts are orange instead of black.

While I've mentioned this before, redundancy is good. The previous Tiger moths are often referred to as Tussock Moths. I don't do that because THIS is a true tussock. Orgyia leucostigma is the White-marked Tussock Moth. Lymantriidae is the family. Tiger moths are Artiidae. The common names are interchanged because both have hairy tufts in the back and front. Tussocks differ in having a short batch of white stiff hairs midway down the body. 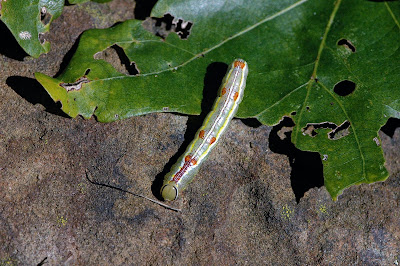 The Variable Oakleaf Caterpillar, Lochmaeus manteo. This is a type of Prominent Moth. Size wise, it's probably one instar away from being mature. In older forms, the four pairs of orange spots unite into one long brown/orange patch along the back. 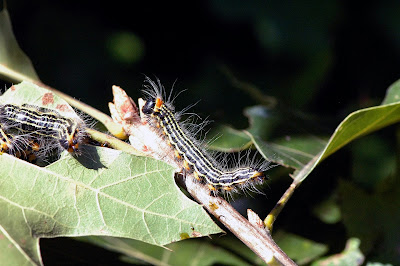 Another member of the Prominent family is the Yellow-necked Caterpillar, Dantana ministra. The genus Datana is difficult to identify to species when looking at the moths, but the caterpillars are pretty distinct. They are all striped like this, but the number of stripes and their color distinguishes which species you have. This one is called Yellow-necked because of the orange-yellow spot behind the head. 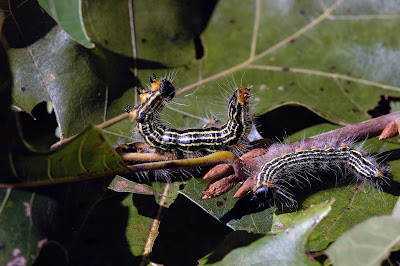 Most caterpillars feed as individuals, but in the genus Datana, caterpillars stay together in groups. When disturbed by a predator, they all rear back like this into a defensive posture. They then spit up a ball of green liquid goo that predators choose to avoid.

Looking similar to the tiger moths, this is a Noctuid moth member. Acronicta americana, or the American Dagger Moth, is larger than the tigers. It's white to yellowish, and differs in appearance by having the long tufts of hairs in pairs along the body. 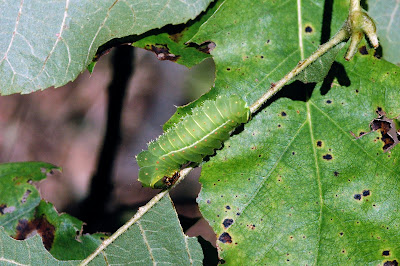 Always a favorite are the Giant Silkmoths. This is the Luna Moth, Actias luna. We've probably all seen the showy green moth with the long tails on the wings, but the caterpillar often goes unnoticed. 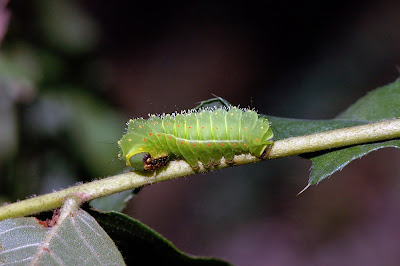 Luna Moth cats look similar to the Polyphemus. Notice the horizontal white line between the two rows of orange spots. On Polyphemus there are green/yellow lines running vertically connecting those rows of dots.

Another sub-group of Silkmoths are known as the Oakworms, many of which are black. This orange one is the Spiny Oakworm, Anisota stigma. The fuzzy tufts near the head on other caterpillars are replaced by ones that more closely resemble antennae. Those are not hairs along the body, but black spines. 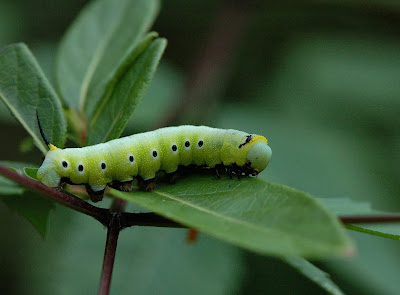 A moth family with a single spine or "horn" are the Sphinx Moths or Hawk Moths. This one belongs to the group called Hummingbird or Clearwing Moths. There are several common names for this species, but because the adult is primarily yellow and black, I call it the Bumble Bee Clearwing, Hemaris diffinis. The breathing pores or spiracles form a row of shiny black spots. The underside is completely black. The horn is solid black except for the yellow base. This species also wears a yellow pearl tiara above the head. It's a very common species. 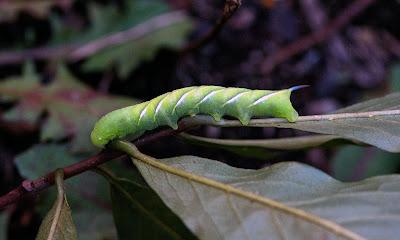 Not as common, but by no means rare, is this hornworm found feeding on Pawpaw trees. Yes, it's called the Pawpaw Sphinx, Dolba hyloeus. There are several similar looking species that may also have a blue horn. The white streaks are bordered by a thin black line. Most importantly is the green head that contains no other facial markings. 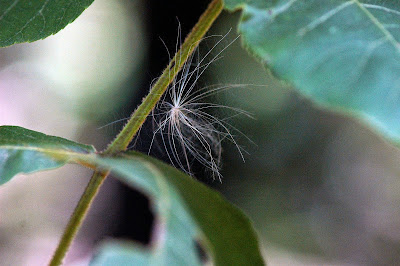 Now what the heck? No it's not a caterpillar. It's a pair of albino Daddy-longlegs mating. That would be affirmative on the negative again. It is just a Thistle seed. 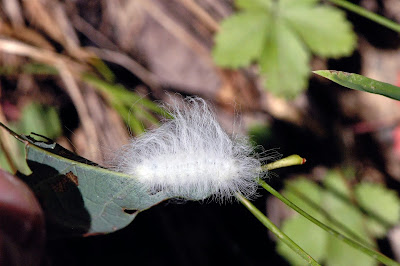 Oh, a whole bunch of thistle seeds? Not this time. Just showing you have to keep your eyes peeled at all times. Looks can deceive. This white caterpillar with the Martin Short hair is an early instar of the Puss caterpillar. 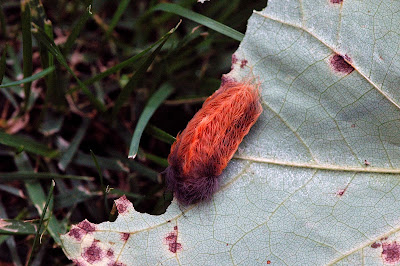 The mature caterpillar takes on a totally different look. This will hatch into an adult known as the Black-waved Flannel Moth, Lagoa crispata. Be careful, there are stinging spines under those soft hairs. 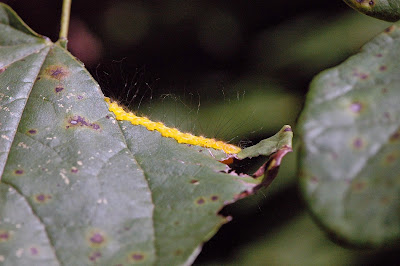 Here is another example of looking at everything very closely. Just a thin strip of yellow on these green leaves was enough to catch my attention. 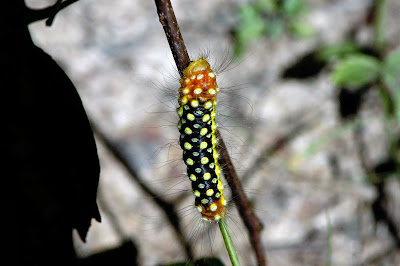 Had I not been meticulous, I would have missed this ornate species wearing polka-dotted pajamas. This is our second representative of this family in Ohio. Norape ovina, is known as the White Flannel Moth. The adult is plain white, and can't hold a candle to the colorful larva. 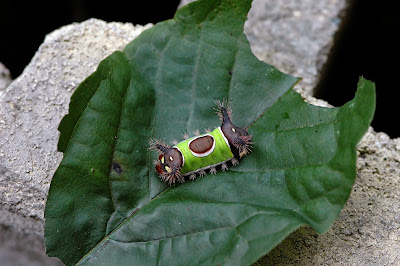 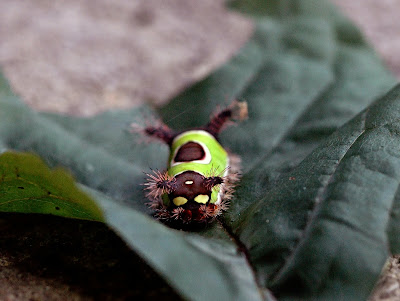 I wonder if those ghostly fake eyes serve to deter predators. Closely related to the Flannels are the Slug Moth caterpillars, the Limacodids. Now anybody that follows my blog knows this is my favorite family of caterpillars. They have so many weird looks and shapes. They have no prolegs underneath, so they move at a snails pace. Those spines serve as protection. The Saddleback, Acharia stimulea, is the one most familiar to people. stimulea is right, those spines hurt! 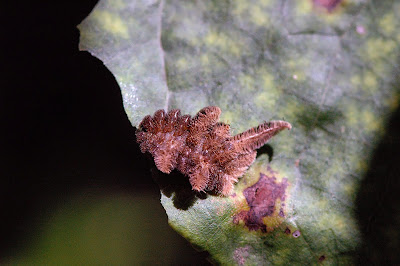 No that's not a gall, or brown fungus on the leaf, but another slug caterpillar. Phobetron pithecium, the Hag Moth. Those appendages will vary in size and number. 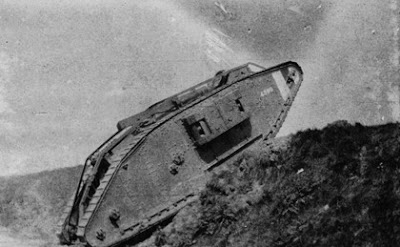 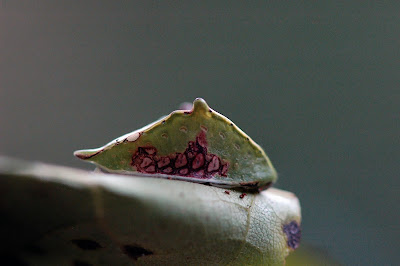 I saw a miniature World War 1 tank actually moving on a leaf.  No really! 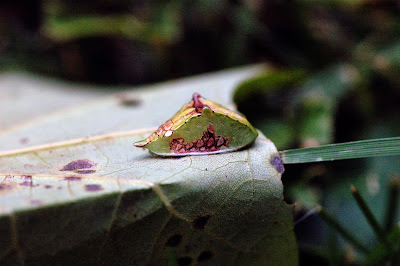 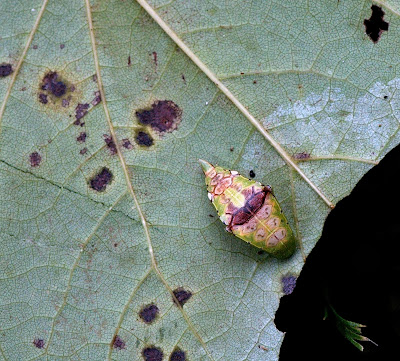 Talk about strange shapes, this one may take the cake. The Skiff Moth, Prolimacodes badia. It's bad alright. The moth is very common, I see it everywhere, but I've been waiting a long time to photograph the caterpillar. The top and sides of this hump-backed species looks like a leaf beginning to decompose. 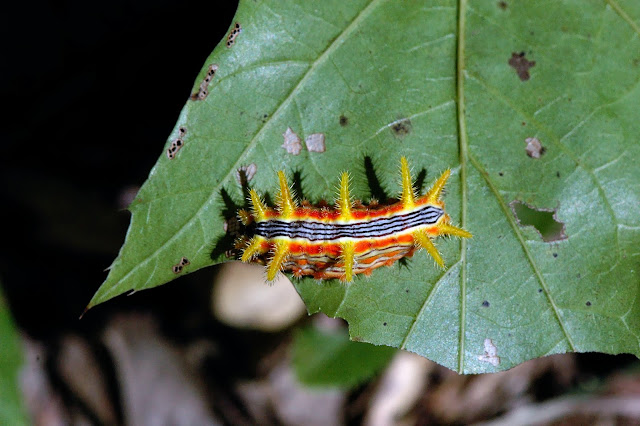 Creme de la creme. By far the showiest of all the slug caterpillars is Parasa indetermina. Like the above, I've waited forever to find this guy. The common name is the Stinging Rose Caterpillar. Named because it was found eating Rose, the food plant list for this species is quite long. 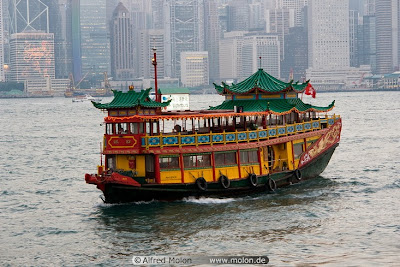 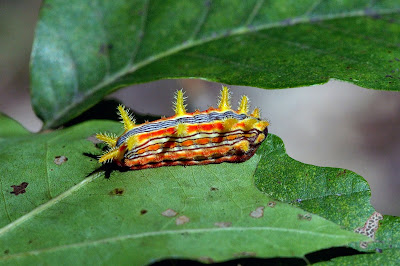 "Slug caterpillars look like Chinese Junks". I've heard that before, but I'll leave that up to you.
Posted by DenPro at 1:45 PM