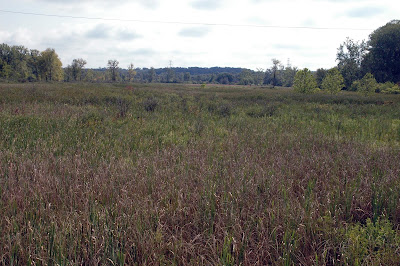 After visiting Cedar Bog, I wanted to get exposed to more fen environments. Lynn Holtzman and I decided to make a list of places to visit. Lynn spent a couple decades working in this part of the state, so he knew all the good places to hit. We started at Beaver Creek Wildlife Area. This fen is not as pristine as others in the area. Water levels have been manipulated and Turtlehead, the food plant of the Baltimore Checkerspot Butterfly has virtually disappeared, and Cattail has invaded heavily. Still, there were plenty of interesting things.

One of the first things I saw along the boardwalk was new to me. It reminded me of a Harebell. I knew it couldn't be that, but I was in the right group. This is Marsh Bellflower, Campanula aparinoides. It's a five petaled flower with very thin leaves. 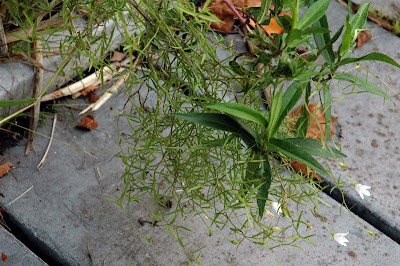 The stems and leaves tend to grow in a ball, and remind me of Spanish Moss. 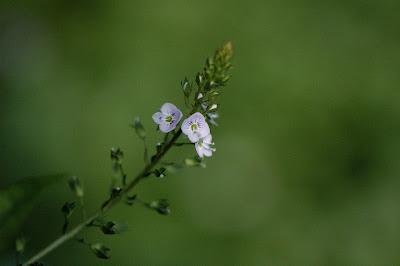 Growing among the Water Cress along the streams was American Brooklime, Veronica americana. If it looks like a Speedwell, well, it is.

Also common in wetlands are Bur-reeds. These with the large golf ball fruit are Giant Bur-reed, Sparganium eurycarpum, the most widespread species in Ohio.

Great Water Dock, Rumex orbiculatus. Nobody pays much attention to Docks. They are usually considered weedy plants. Remember, this is a wildlife area. These wetlands are important for waterfowl during nesting and migration time.

Ducks go crazy in consuming Dock seeds like this. 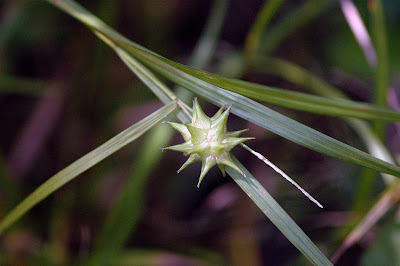 Another important food for waterfowl are the seeds of sedges. This is Gray's Sedge, Carex grayi. These 'spiked' sedges remind me of Sweetgum, ball and chain weapons like the mace, or the old WWII underwater mines. Carex intumescens looks similar to this, but is not as widespread in Ohio. Plus the base of each spike or perigynia is not as swollen as these.

Another new one for me was the Sweet-scented Indian Plantain, Hasteola suaveolens. This plant is restricted to aquatic environments, or what is classified as a FAC wetland species. Though similar, it is not the same as the Fen Indian Plantain I posted from Cedar Bog.

The main identification feature on this species are the arrow-head shaped leaves. 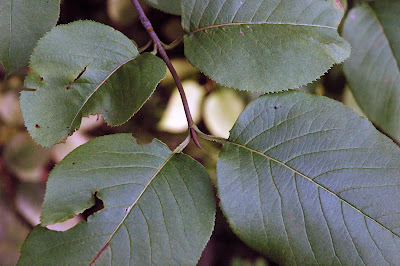 A plant I mentioned in the Cedar Bog post, but didn't illustrate is Nannyberry. Viburnum lentago. It prefers moist to wet soil. Viburnums are opposite branched shrubs that provide fruit for birds and other wildlife. 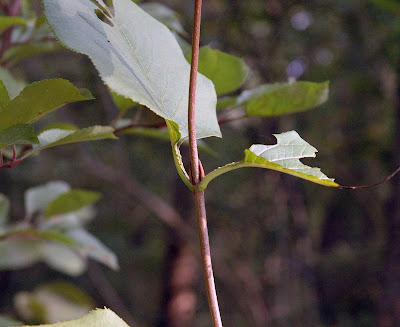 Besides their leaves, Viburnums can be recognized by the buds. The terminals look like spears, and the lateral buds don't protrude outward, but tend to hug the twig. Nannyberry buds range from gray to rusty orange. The leaf petioles are flattened and wing like, with the edges being bumpy or rough to the touch. 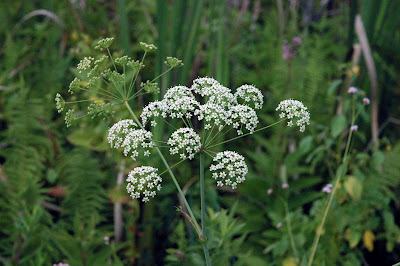 This delicate looking plant is common in shallow wetlands. Water Parsnip, Sium suave, looks a lot like other members of the Apiaceae. This one happens to be edible. 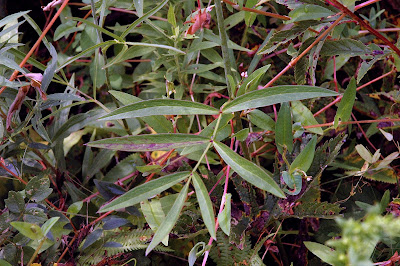 The leaflets are once divided and in pairs. Again I refer back to Cedar Bog, and the similar looking Water Hemlock I posted. That has leaves in threes. This one also lacks the purple spotted stem of Poison Hemlock. 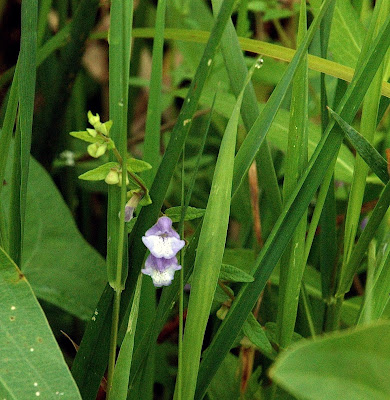 I have a bad habit of walking past these and saying "Skullcap", and that's it. I should know better. There are 10 species in Ohio, so let's try and figure this one out. Flowers are solitary or in pairs, medium sized as skullcaps go. Leaves are short and sessile, slightly serrate. That makes it Marsh Skullcap, Scutellaria epilobifolia. (S. galericulata)

As always, not everything that catches my eye are plants. At first I passed this off as the common Pearly Eye. Closer examination finds it to be a much more uncommon species known as the Northern Eyed Brown, Satyrodes eurydice. 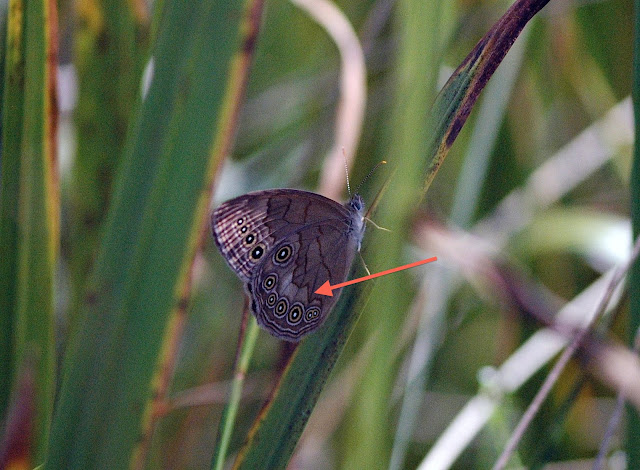 What separates this from the similar Pearly Eye and Appalachian Eyed Brown, is the dark line on the hindwing. The brown line is sharply angled near the bottom. It's much more rounded or wavy on the other species. To a lesser extent, the four circular spots in the upper wing are often more distinct as well. 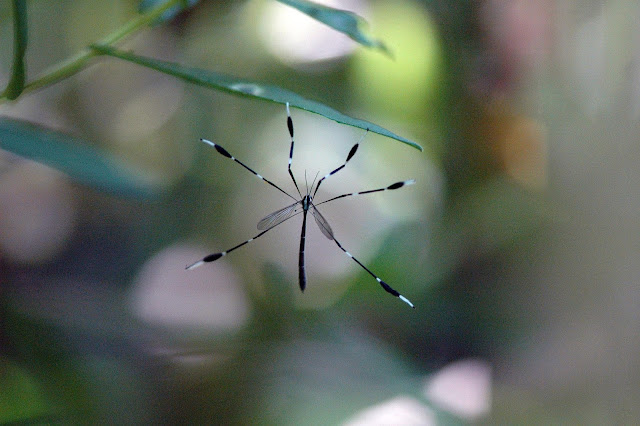 Flying in profusion was one of my favorite Dipterans. The Phantom Crane Fly, Bittacomorpha clavipes. The larvae are orange, and look like a giant rusty maggot with a long breathing snorkel. The adults aren't called the Phantom for nothing. They fly just like this, with their legs spread out. The black and white pattern may be spotted by you easy enough, but within a second they disappear right in front of your face. Oh, they're still there, just very hard to follow.

They are slow fliers that never seem to want to land. I had to crawl through thickets of Rice Cutgrass to find one resting. That plant will tear you up. Five days later the cuts are still covering my arms. Hey, when in the field, you gotta do what you gotta do!
Posted by DenPro at 6:35 PM No comments: 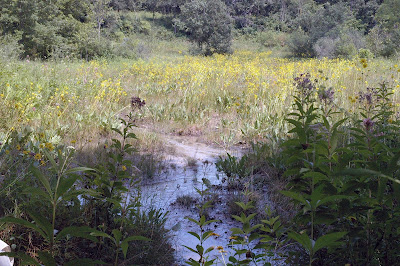 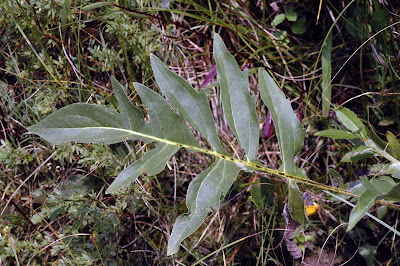 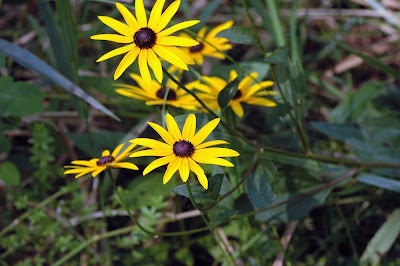 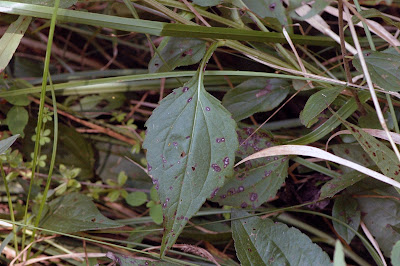 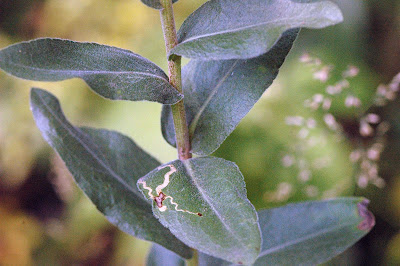 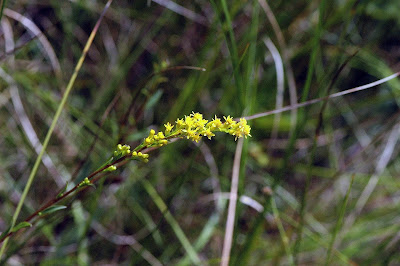 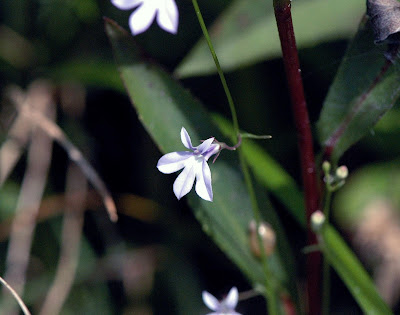 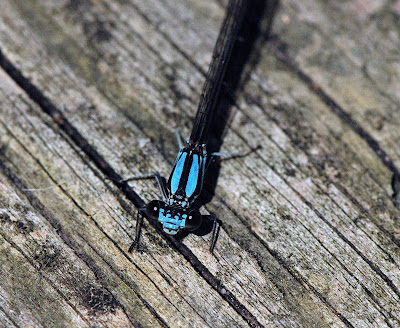 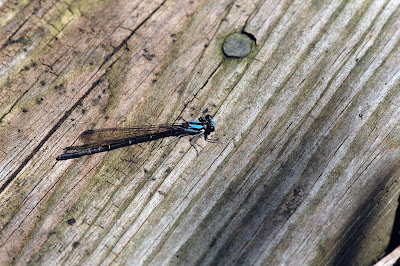 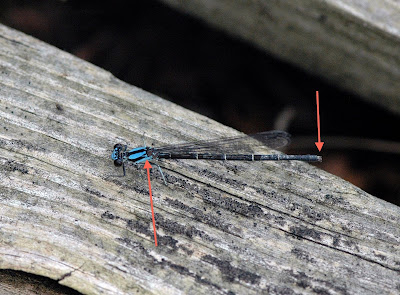 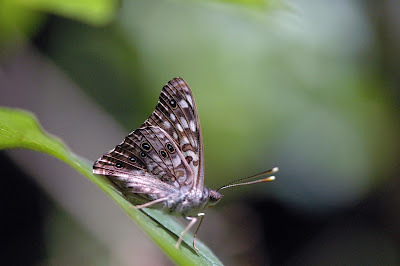 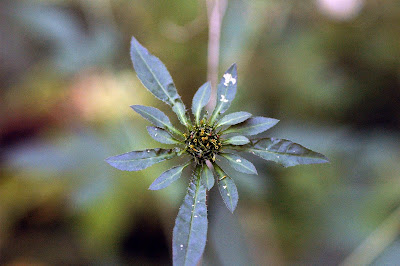 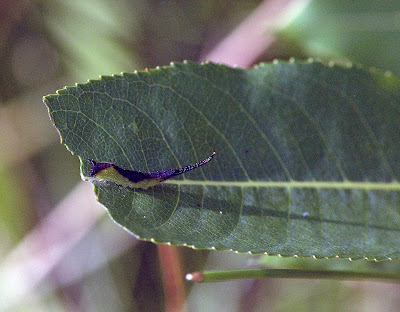 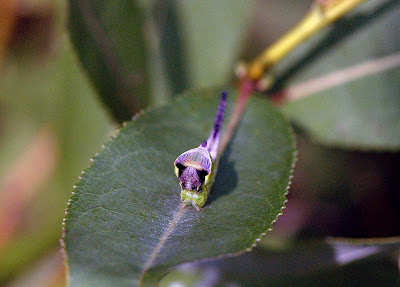 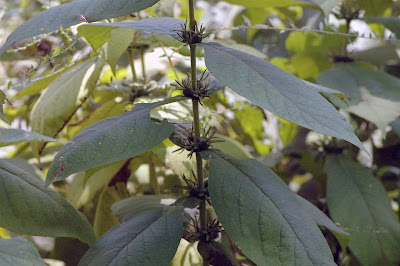 This is sort of a P.S. I threw in. Growing among the thoroughwort was a plant I took for a Gentian, but the fruit is all wrong. That led me to the Horse-gentian group Triosteum. Question, does this fruit turn orange? If so, does one consider these leaves truly perfoliate? That would make it Tinker's-weed. If those leaves do not qualify as perfoliate, then it's T. aurantiacum, Wild Coffee. The leaves are at least clasping. Somebody make up my mind.
Posted by DenPro at 6:34 PM 3 comments: