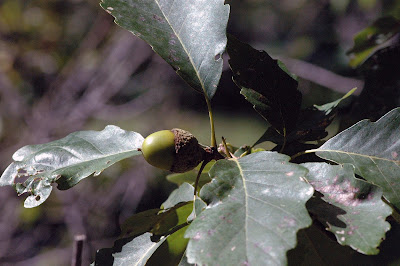 The sun sets earlier every day. That means school has started, and my posts will probably dwindle. These are just a batch of photos I've had sitting around for six weeks. Spiders, ferns, aphids, etc. will be placed in their respective older posts on those subjects. I pulled some pics out that were originally here and put them elsewhere, and added others to update my hiking around. 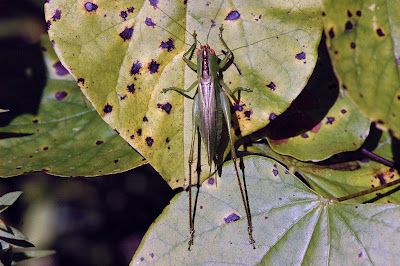 This critter decided to hang around and let me photograph him. Most of these tend to fly or jump away. It's a Meadow Katydid. They are divided into greater and lesser katydids. I think this is a Greater in the genus Orchelimum. Common Greater Katydid, O. vulgare seems most likely.

You'd think with those eyes and brown marks on the head and thorax, it would be easy to narrow down. Not really, many of the species are similarly marked. You need to see the sub-genital plates at the back of the abdomen.


Same goes for this relative I found nearby. This is a Bush Katydid of the genus Scudderia. You have to look at the genitalia. No dissection needed mind you, but you have to have the specimen in hand.

As soon as I tried to get a closeup of the abdomen rear, he turned around, and those eyes were giving me a very nasty dirty look. I decided to pass. 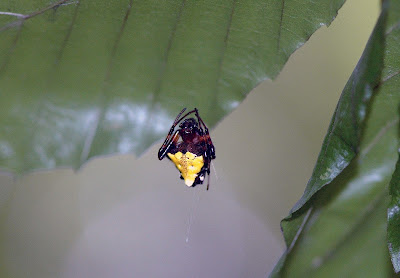 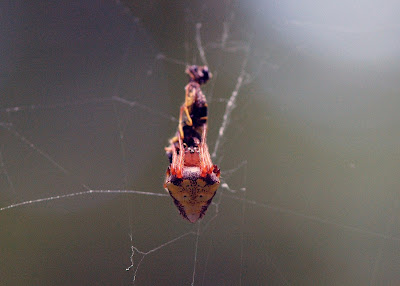 The Orb spider that sits facing up instead of down. Arrowhead Weaver, Verrucosa arenata, and an unlucky wasp.

Rough Bedstraw, Galium asprellum. Really, how can you tell? Well you can't by this photo.

Touch the stems and you'll see where the name comes from. They have little prickles that stick to your clothes like the larger Clinging Cleavers bedstraw. Once I have around 10 species photographed, I promise I'll do a key on separating them all. 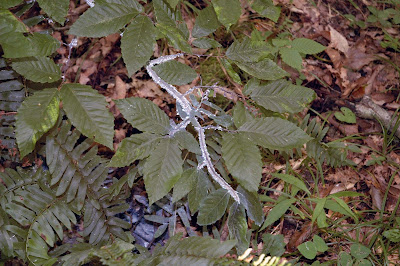 Every late summer and fall certain numbers of American Beech trees will show white lines on the edge of the twigs. 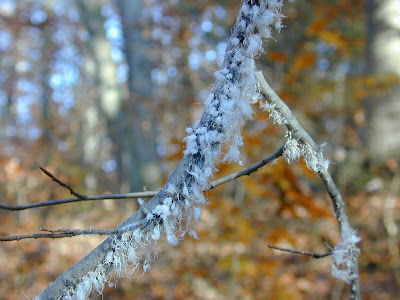 These are Wooly Beech Aphids, Grylloprociphilis imbricator. At this time of year Aphid colonies will consist of winged males for mating. Throughout the summer many species of aphids have populations made up entirely of females only. 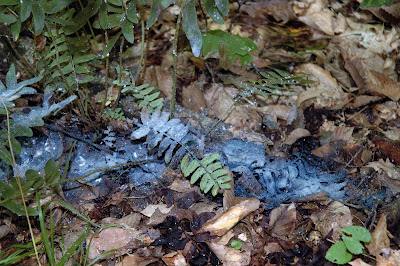 Beneath the Beech trees you may often notice what looks like piles of old charcoal briskets dumped on the ground. This is developing Sooty Mold Fungus feeding off the sugar water or honeydew excreted by the aphids.

Many Aphids, including the wooly ones, can be rather species specific to certain plants. This is the Apple Wooly Aphid, Eriosoma lanigerum on Wild Crabapple. 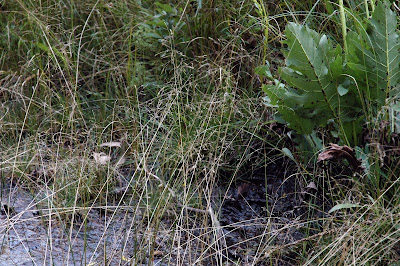 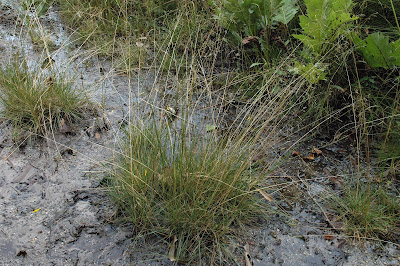 Calamagrotis canadensis, known as Bluejoint Grass. This is a clump forming species. Although this was seen in a fen, it is a widespread species found in any wetland. Ducks and Muskrats feed on the seeds, and the clumps make excellent nesting material. No surprise that it's an important species in waterfowl management, especially in the upper half of Ohio and along Lake Erie. 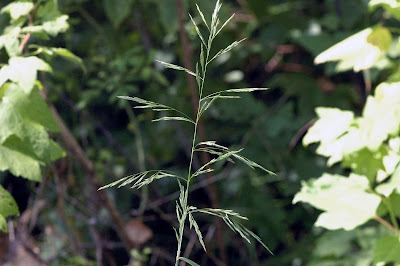 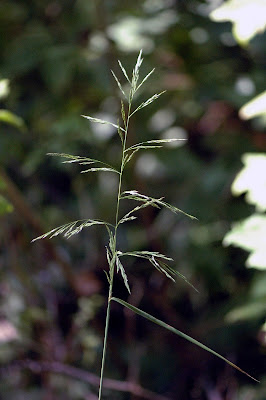 Wood Reed Grass, Cinna arundinacea. Maybe not as important in wildlife management as the Bluejoint, it's still common everywhere. In sunny openings, the seed heads are much more dense. In heavy shade they appear a bit sparse. This form looks similar to Slender Wood Reed, C. latifolia, but that is an endangered species in the state, found only in two counties of NE Ohio. 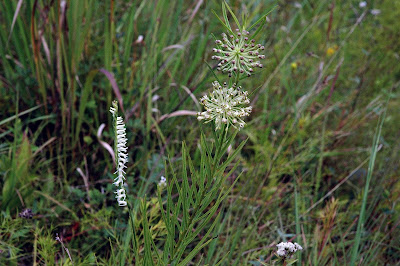 The best time to wander into prairies is mid to late July. But even a month later you'll still find plants in bloom. Two favorites of mine include the Spring Ladies Tress Orchid, Spiranthes vernalis on the left, and the Tall Green Milkweed, Asclepias hirtella. 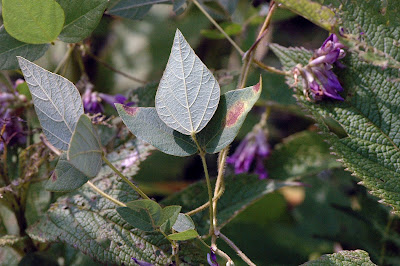 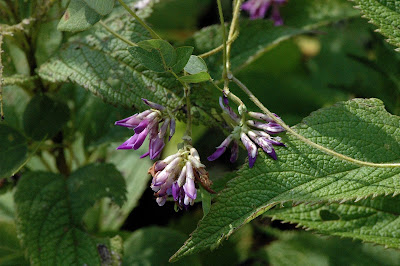 A common hairy vine with three leaflets and purple flowers. This is Hog Peanut, Amphicarpaea bracteata. I have found this in just about any open area habitat. A showy member of the Legume family. 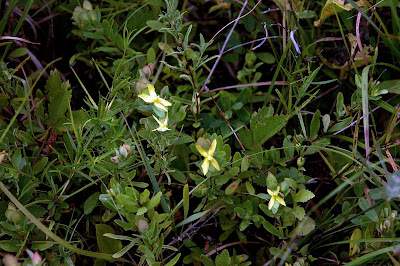 Also common in open sites is Hypericum hypericoides. Most St. Johnswort Hypericums have 5 petaled flowers. These with four yellow petals are known as St. Andrew's Cross. 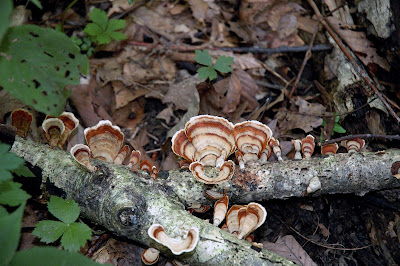 Turkey Tail Fungus, or at least that's what I think. Fungi and Mushrooms is a subject I know very little about. I have enough photos to do several posts on this group, if I can ever find an expert to sit down with. I know several people who are familiar with the edible species, but I don't take a lot of pictures of toadstools and puffballs, I look for the weird instead. Things like Jelly Fungus, Coral Fungi, Dead Man's Fingers, and things like that. 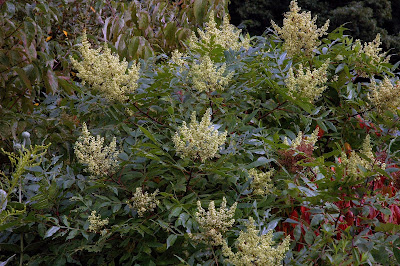 In late summer, the Winged or Shiny Sumac, Rhus copallina, is an excellent source for insect photography. Most of these plants have now gone to fruit. 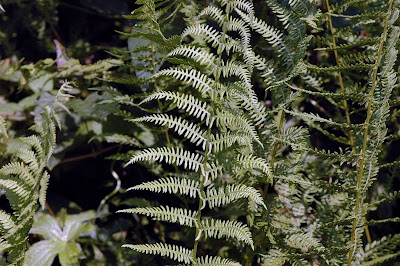 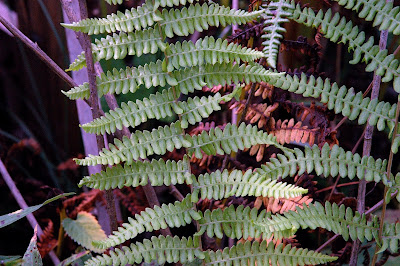 While working on my second post about ferns, this species eluded me throughout Athens and Hocking Counties. I had to go to western Ohio to get it, and found it in abundance in wetland habitats. Thelypteris palustris, the Marsh Fern, (palustris means swamp). The pinna, or leaflets, occur in both this skinny and broad form. 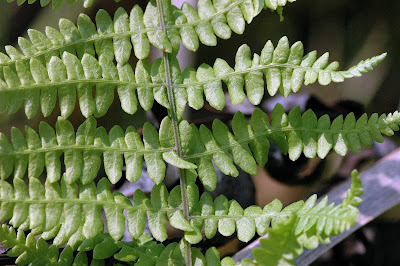 Most of the plant is smooth to the touch, but the central rachis or stem is quite hairy. One identification character I noticed that was consistent on all the plants was the basal leaflets next to the rachis are bent inward. 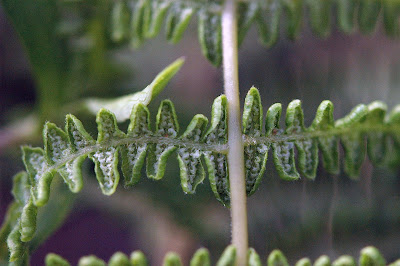 The sporangia are not produced on a separate stalk, but on the undersides of the pinnae. Most ferns prefer a woodland setting. Look for this in open areas. 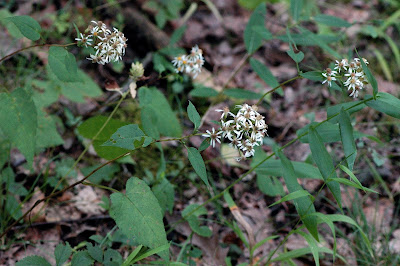 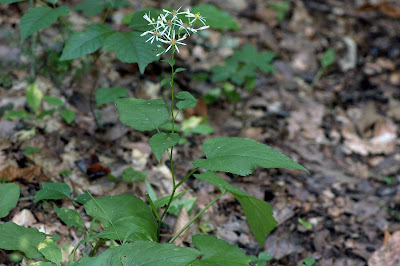 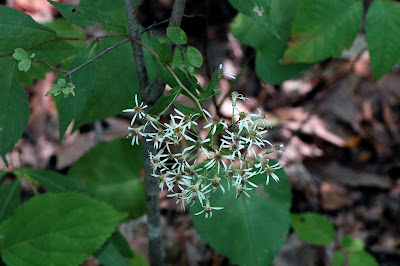 Most of the time they have a rather flat-topped bloom, but on vigorous plants, the flower head may be more umbel shaped. 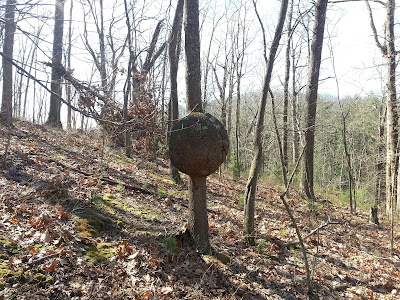 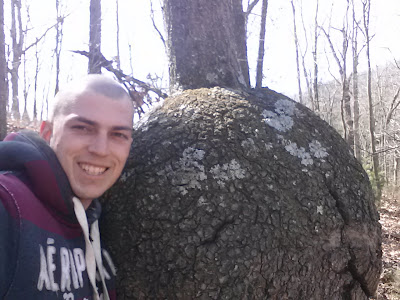 A student sent me this picture of a Tree Burl on Oak. Burls are found on many tree species. They can be caused by several factors. Fungi, a virus, insects, or some damage to the cambium layer. Sometimes stunted twigs and buds that can't break through the bark may cause it. Many trees actually have burls on their roots. Burls don't kill the tree, but a bunch of them on the same tree may be so heavy, the tree can't hold up the weight. Burls are often cut off the tree and milled into very decorative pieces highly sought by wood workers and artists. 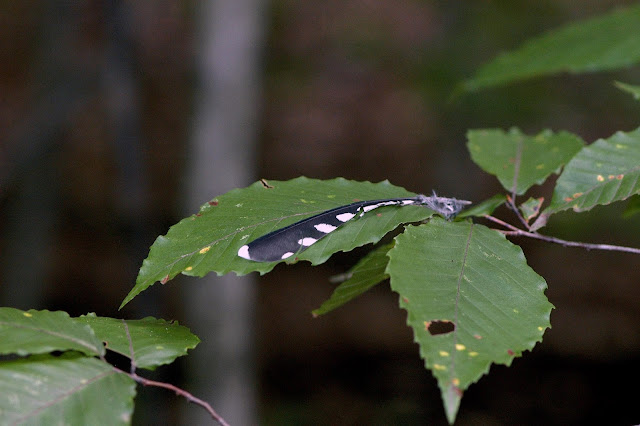 There's a bounty in the county on caterpillars right now. So I'll try to get out and about with the camera some how. But with the semester starting, I've got other things to do, like sit a bit in the office too. I have to feed the need of students greed to learn about Dendrology. Hey, it's okay. Let's just hope I'm not stuck with bad luck, cause it's Friday the 13th.
Posted by DenPro at 1:27 PM