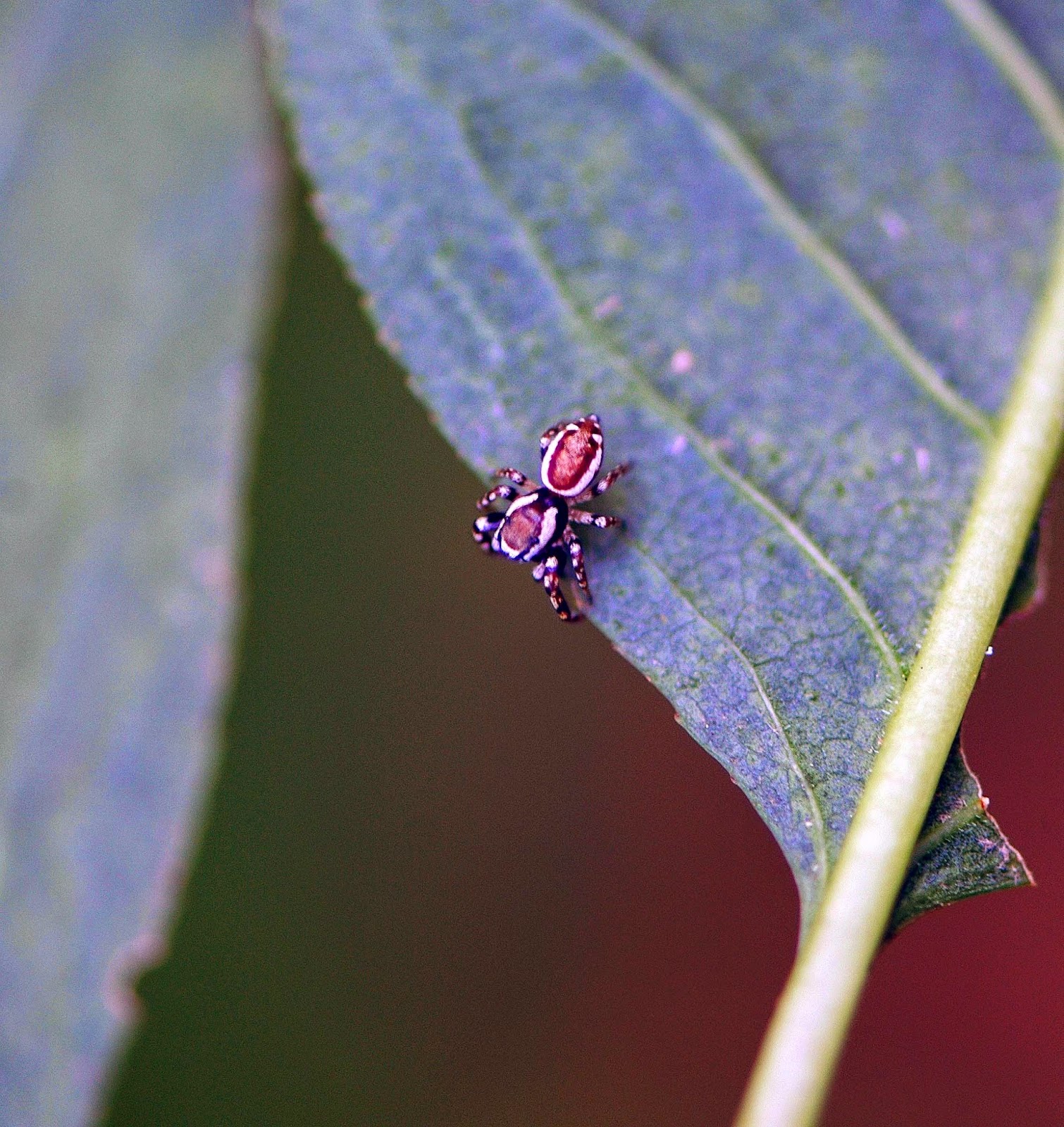 It's that time of year again where my posts become few and far between. Recent cold blasts have made it even more undesirable to be outside unless one has to. To keep the blog going, I was able to gather about 10 more spider species from the past season. None of these photos are great, but a post is a post.

This is Pelegrina proterva, or what I call the White-lined Jumping Spider. Most spiders don't have common names, so I just make one up. Notice the U shaped white band around the abdomen. It breaks up into smaller spots near the rear. Other jumpers may have a similar pattern, so what do I use to separate it? There is a solid white band on the front of the head. 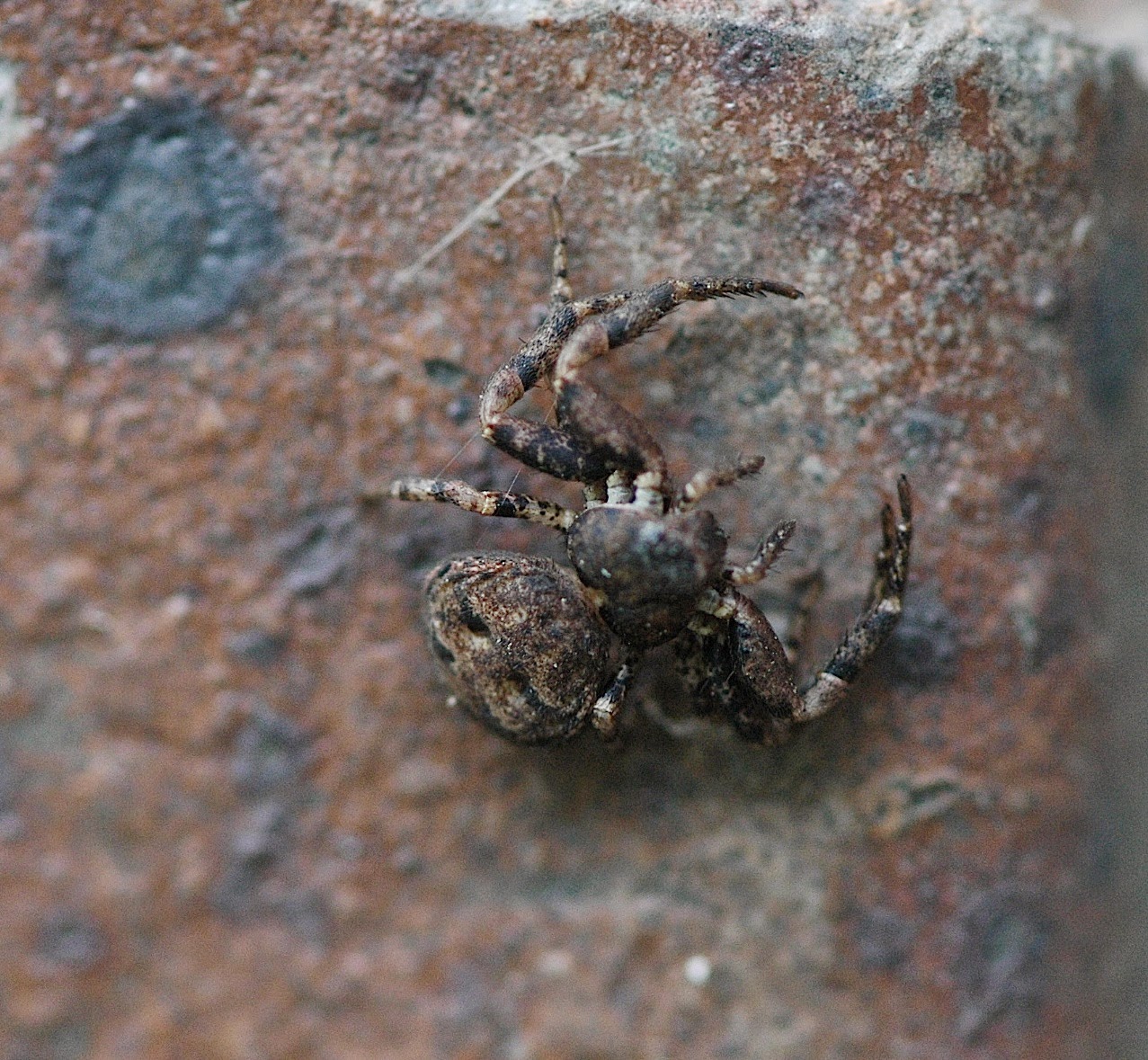 After looking at the abdomen on this spider, my first thought was a type of Orb Weaver. Wrong, I should have paid more attention to those front legs, and how they are curved. This is a Crab Spider, possibly in the genus Bassaniana, but more likely a type of Xysticus. There are 14 of them that all look alike in photographs, and need to be under a scope to determine species. 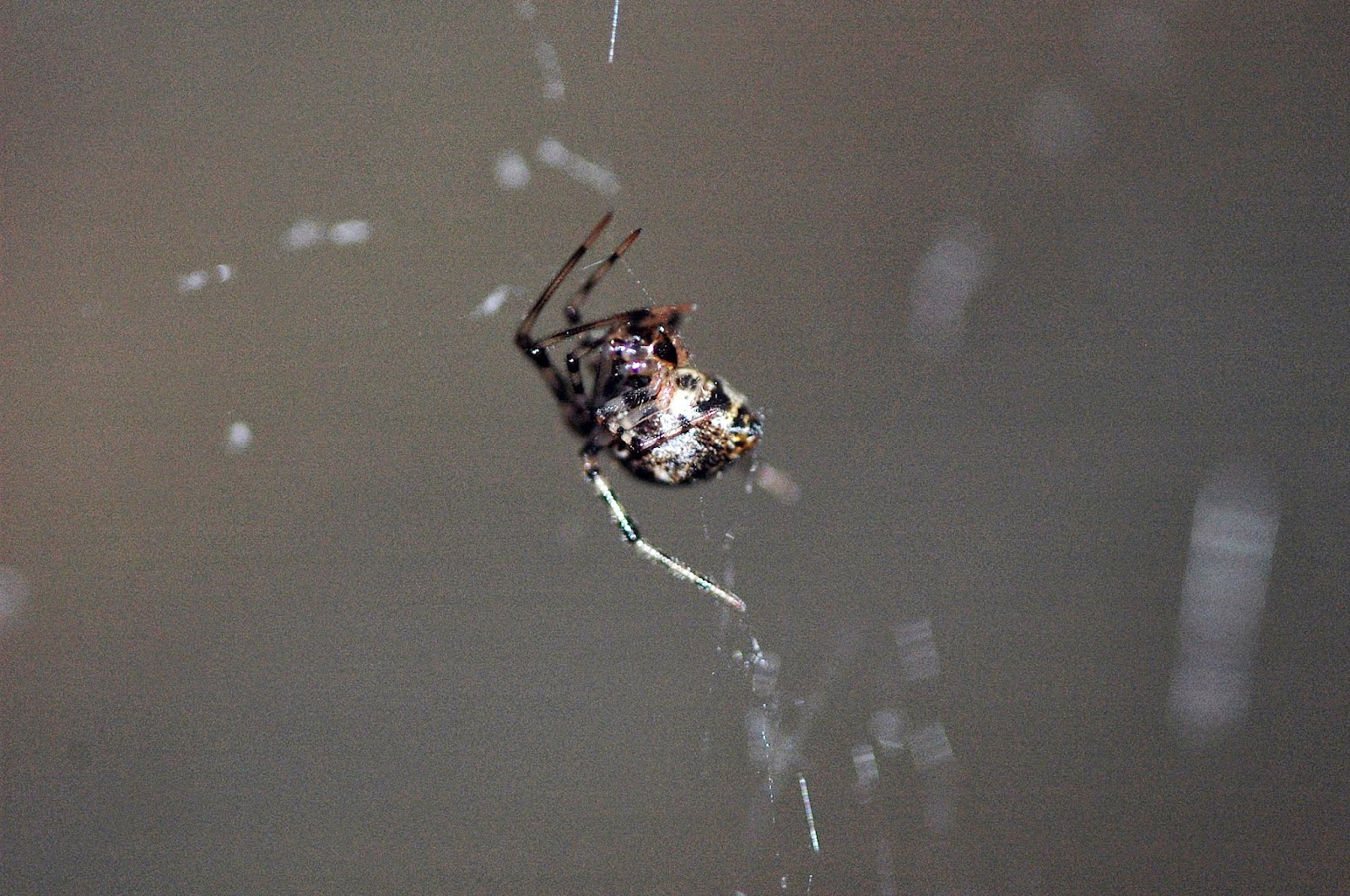 Not much of a photo, but enough to identify it. It helps when there is someone along to hold a flashlight, but this was a solo effort. I took a whole series of these, and this is the only one to come out. That's because these were shot in pitch black darkness. It's called the Cave Spider, Meta ovalis, an orb weaver that lives in caves and overhangs of large boulders. 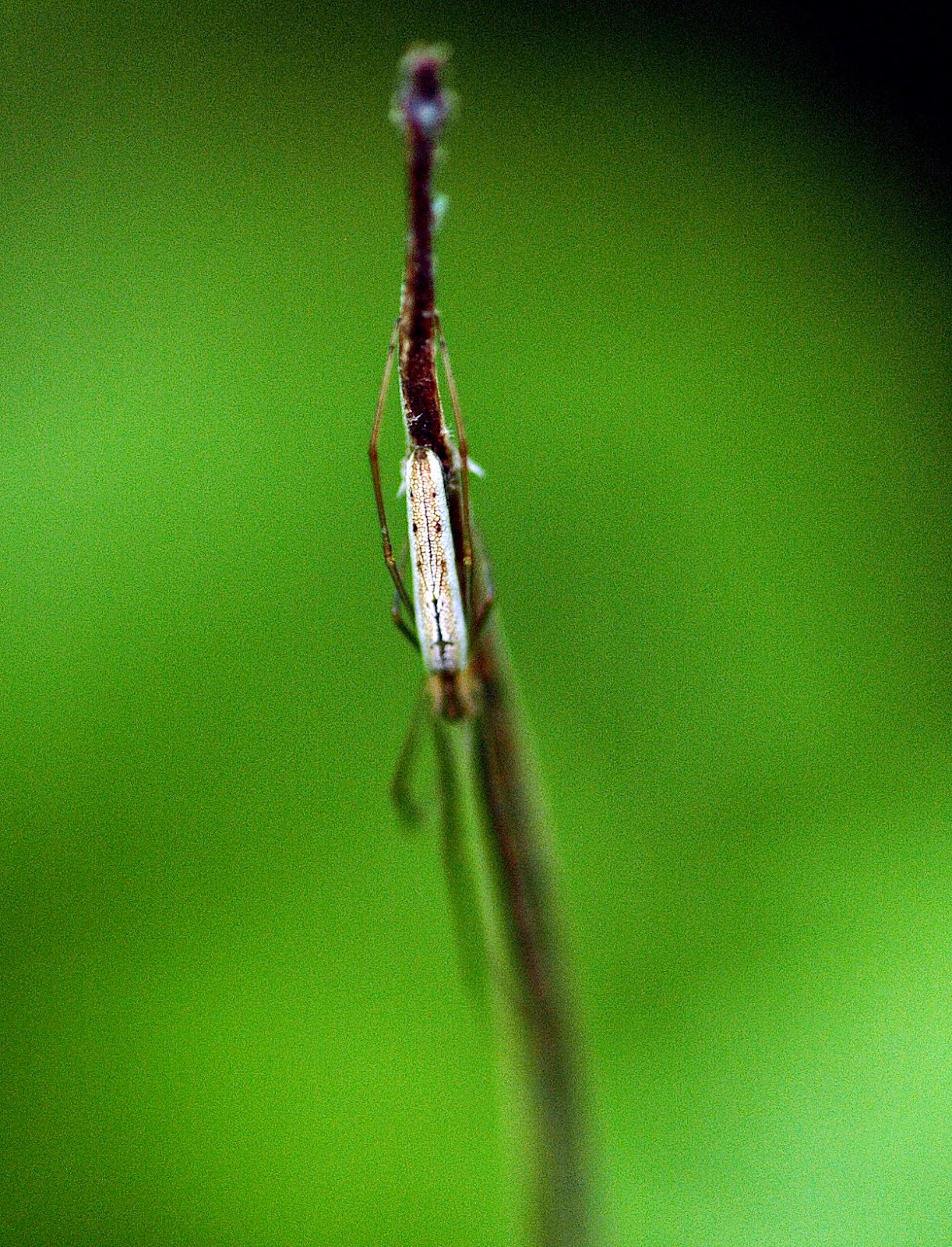 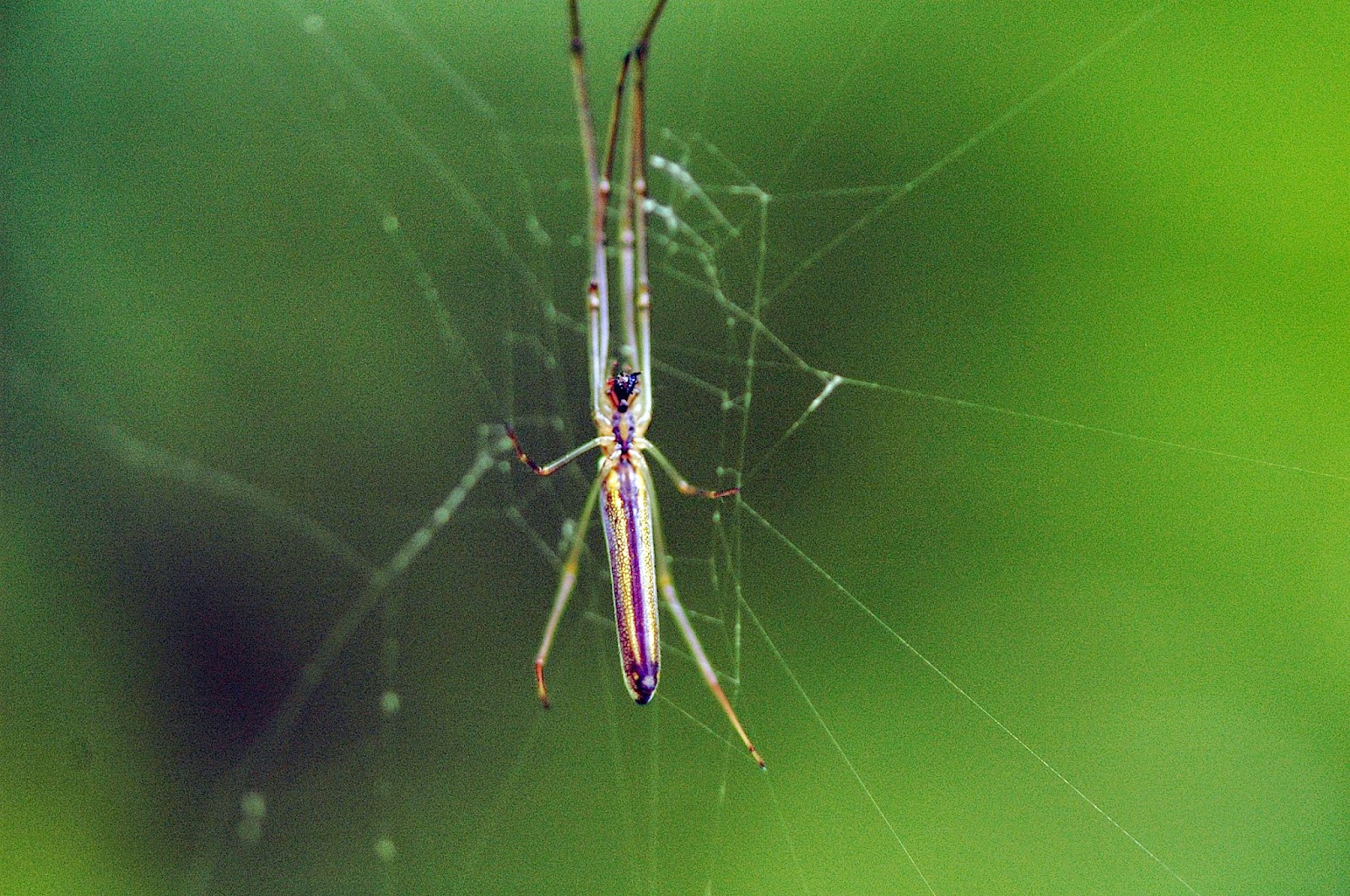 A Tetragnatha species, probably straminea. The family is named for this genus, and is most often referred to as Long-jawed Spiders. In the upper photo, I focused in on the back of the abdomen. The silvery color is broken up by a darker mottled middle band. In the band are six small 'daggers', all pointing to a larger black 'sword' at the front of the abdomen. On the underside, the dark abdomen is lined with two yellow stripes. I have a lot to learn about Arachnids. I need to remember to start taking pictures of the face. The arrangement of the eyes helps put spiders into their appropriate group or family. 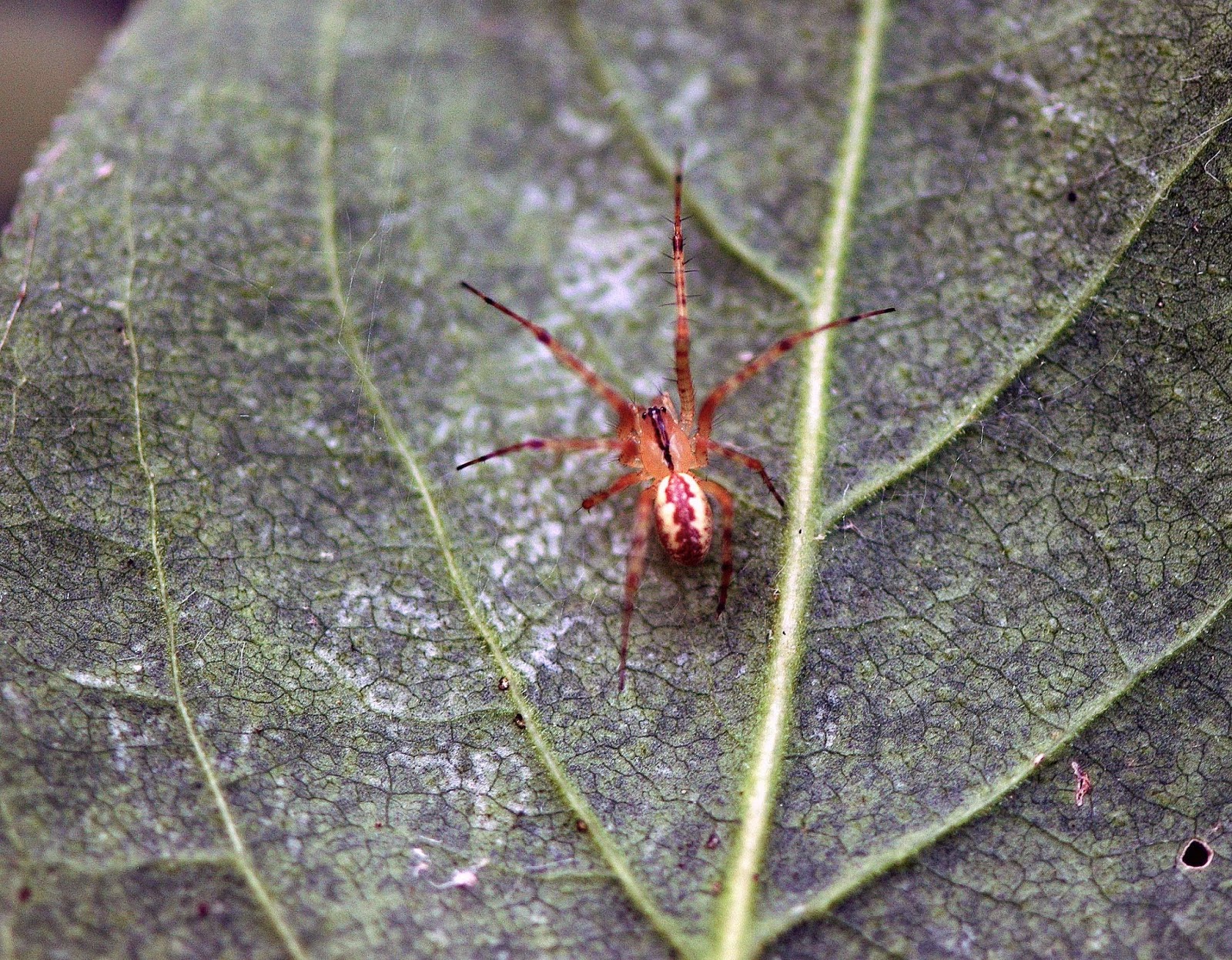 Pityohphantes costatus, a Hammock Spider or Sheetweb Spider. They are named for the shapes of their webs. The abdomen top and sides are dark, with light yellow in the middle. The cephalothorax has a black drill or 'jack-hammer' shape on it. These spiders are more commonly brown. I tried to subdue the colors a bit, but this guy was very abnormally orange. 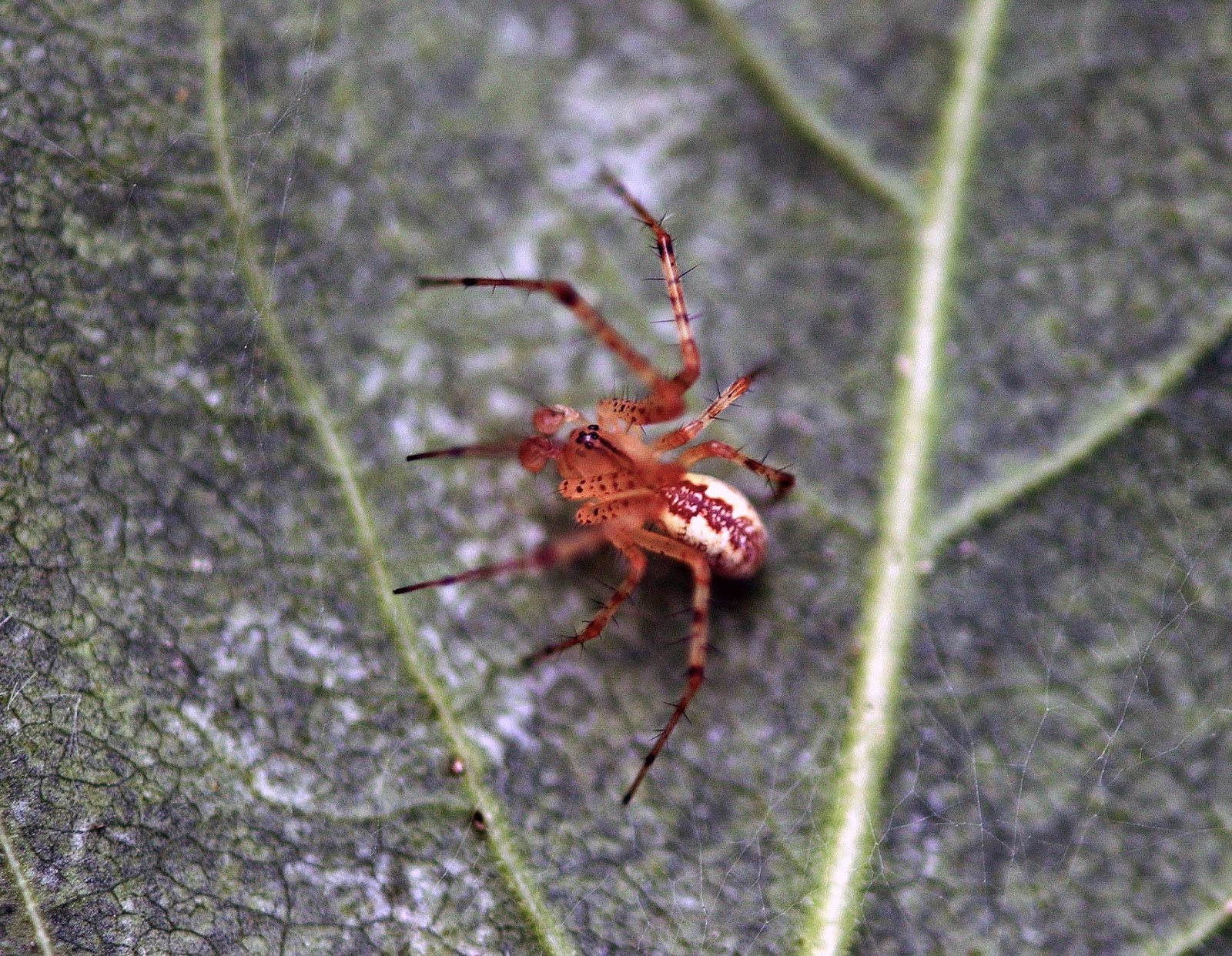 This one is a male. Look in front of the face. You can tell by the enlarged circular pads at the end of their pedipalps. Many spiders use these pads to transfer sperm sacs to the female. 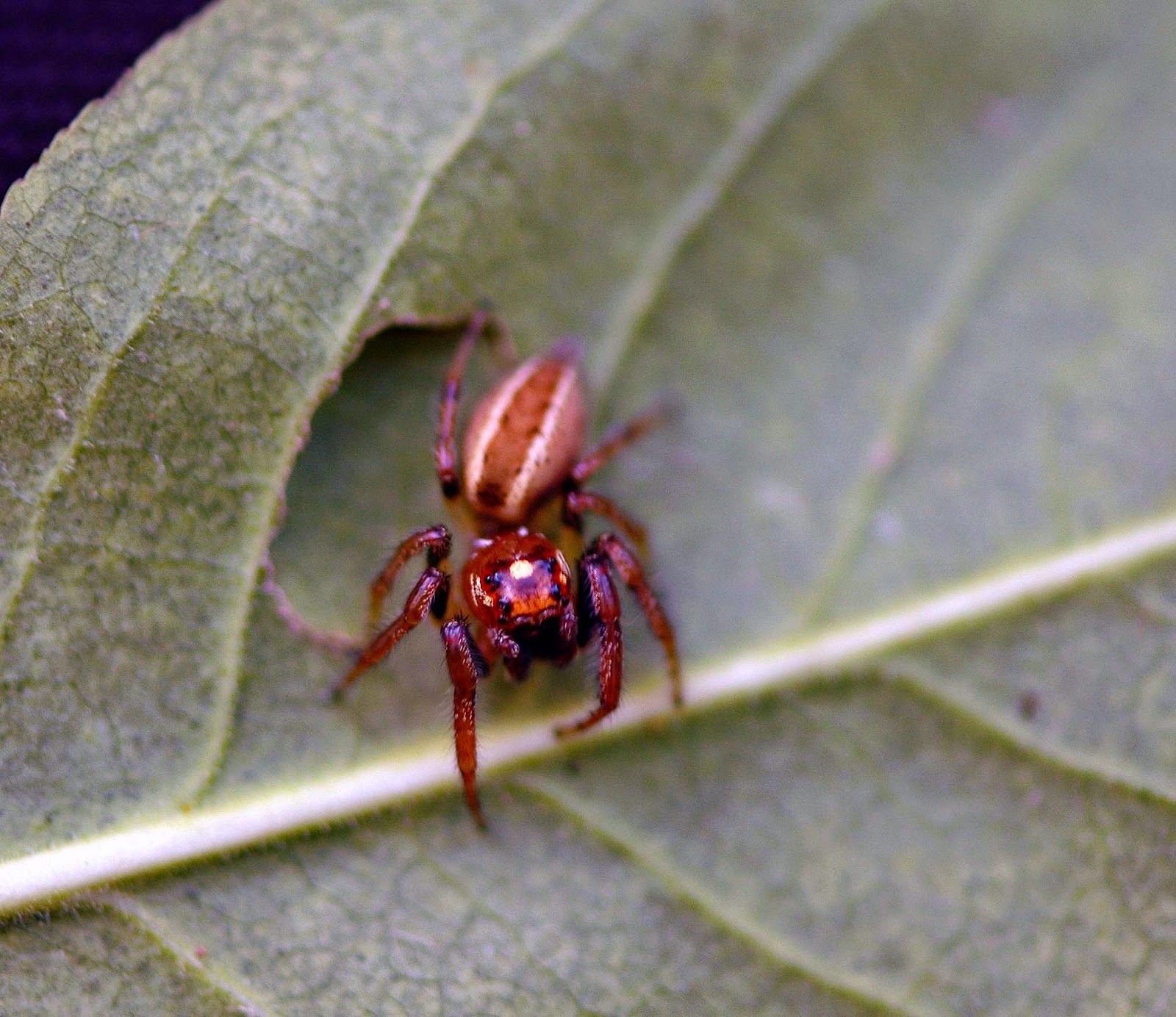 This is another Jumping Spider in the genus Thiodina. Two species look alike, puerpera and sylvana, with sylvana being the more common. Observing the genitalia under a scope is needed to be sure. To get to this group, look for the striped abdomen, a dark orange head and cephalothorax, and a single light spot in the middle of it. I've seen these called the White-spot Jumper. 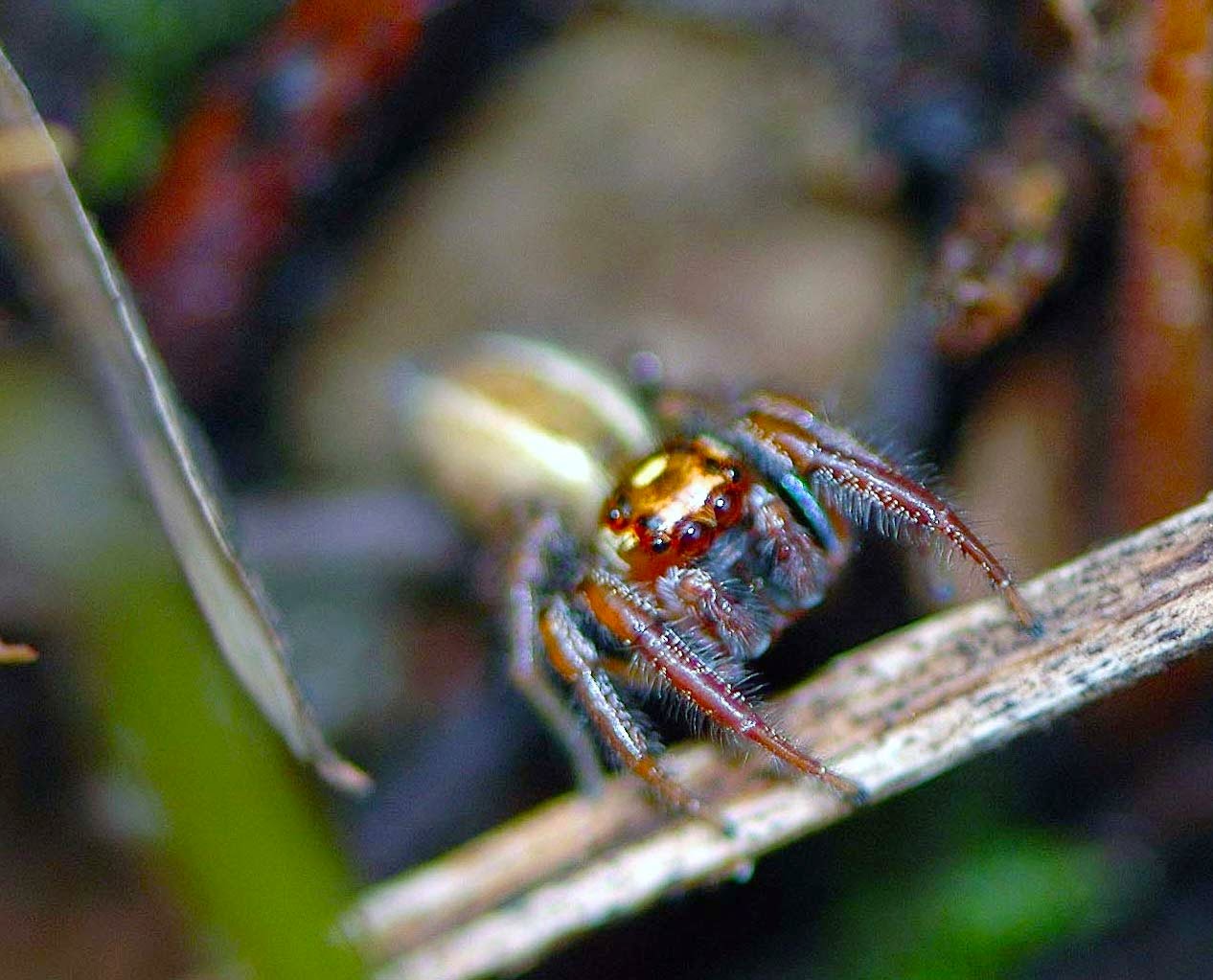 Here is a frontal shot. Jumping Spiders have their eyes arranged both on the front of the head as well as the top. This allows them to see in multiple directions at the same time. 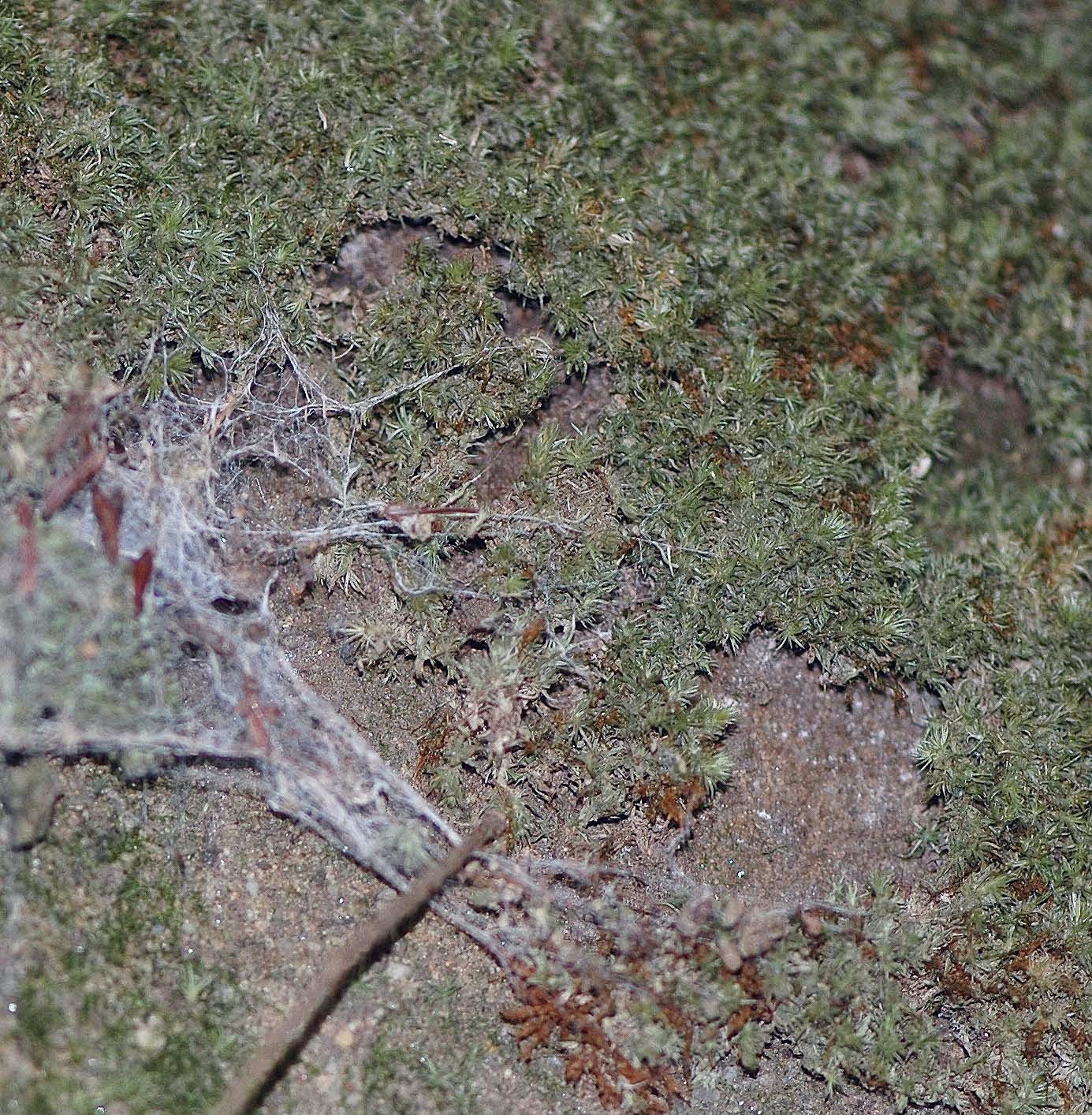 Doesn't appear to be much to see here. That web looks old, used, and torn, as if it had been 'hacked' to pieces. This is the way this web is supposed to look. It belongs to the Hackled Mesh Weavers. They will commonly build their webs on old logs or rock surfaces. We were using that stick at the bottom to tickle the web in hopes the spider would pop out from its funnel web hidden under the moss. 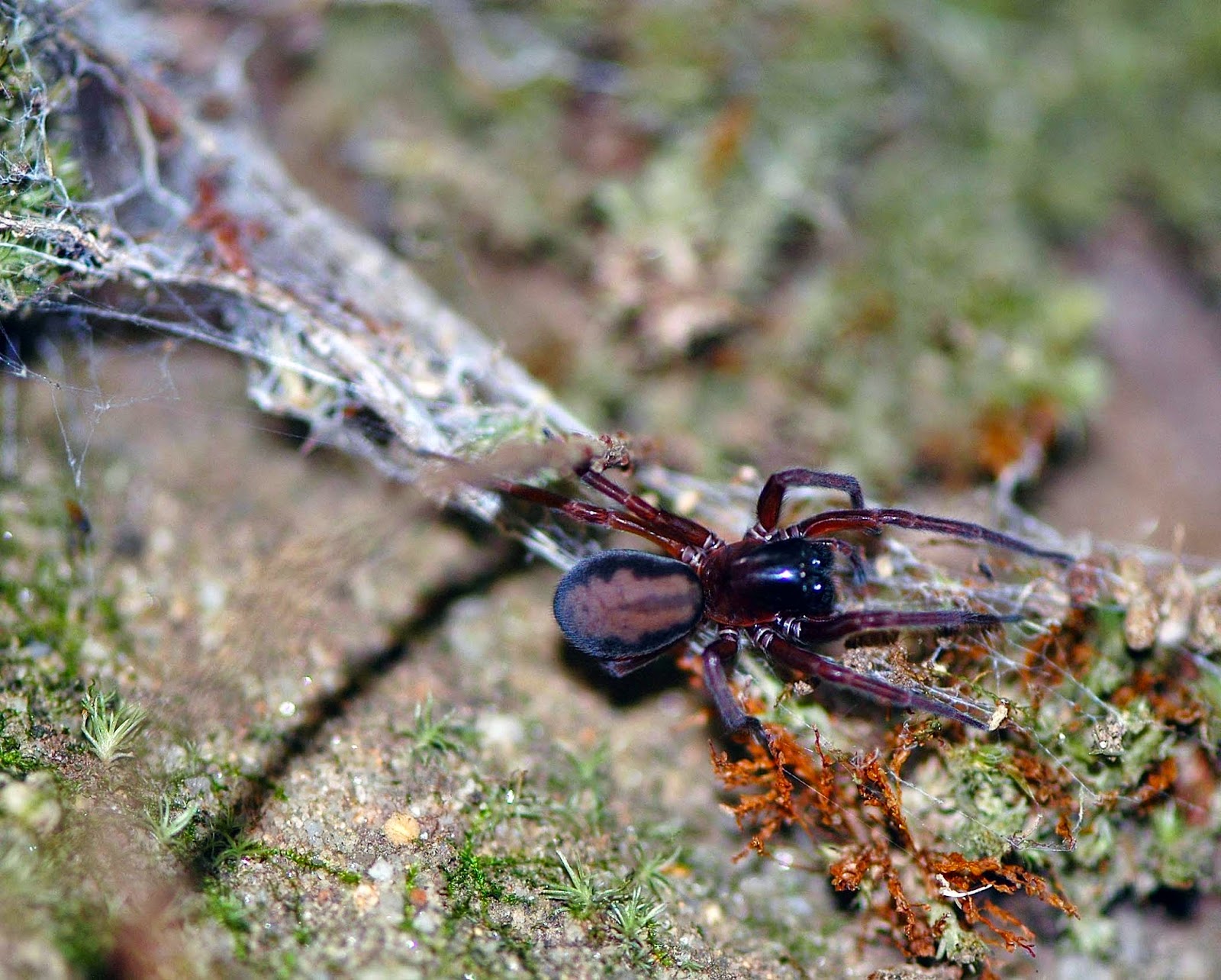 Sure enough, it rapidly ran out to check the disturbance. This species is Callobius bennetti. The abdomen is dark, with a light brown dorsal patch. The legs are rufus, and the cephalothorax is glossy or shiny. The chelicerae, or mouthparts, are very large on this species. 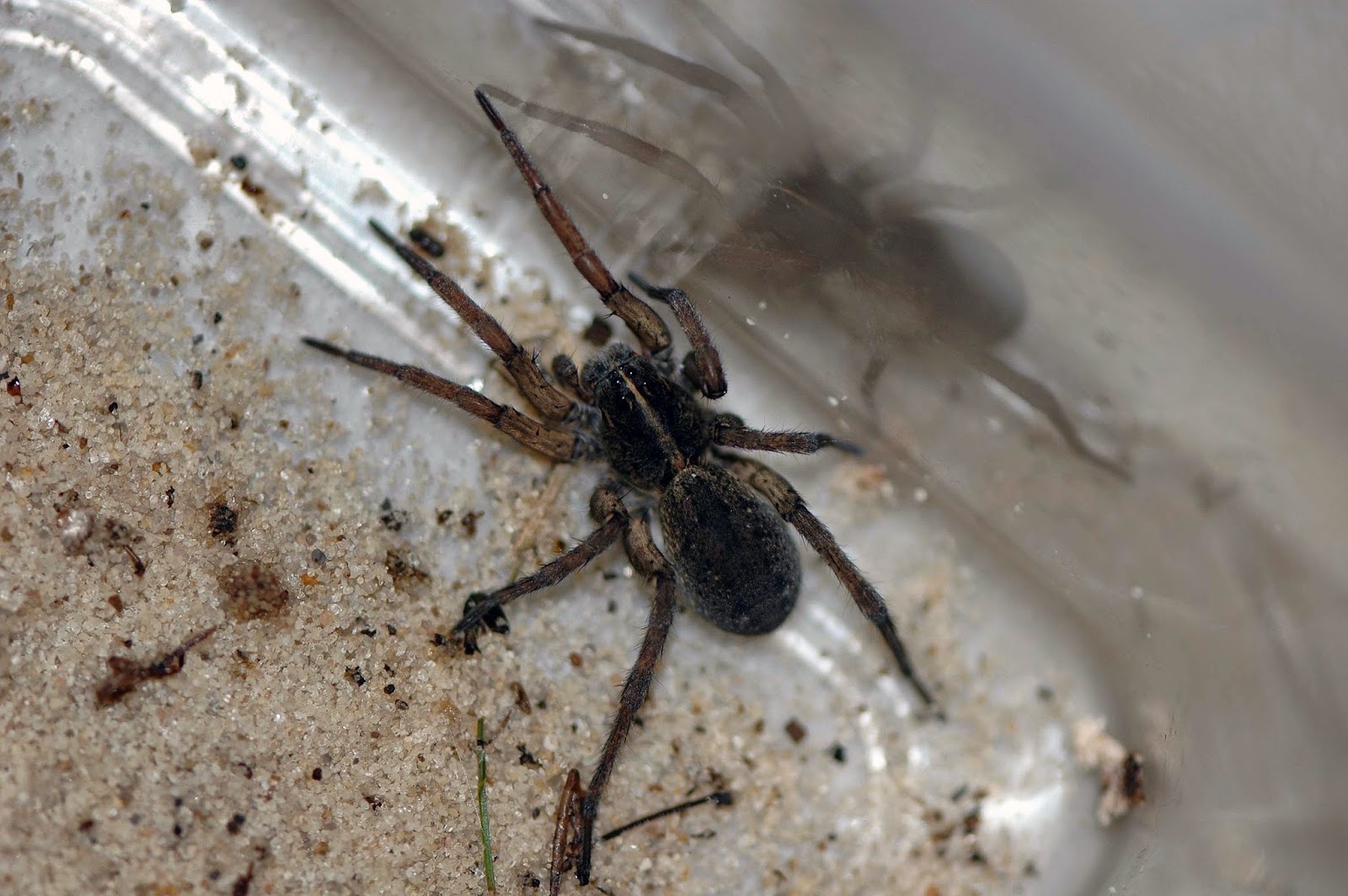 The nice thing about workshops, is that sometimes the specimens are brought front and center in a container. This makes picture taking a little easier. For me cool pics are secondary to identification photos. This is a female Hogna helluo, otherwise known as the Field Wolf Spider. She has a dark patch on the front of the abdomen that otherwise blends into an all brown body. There is a thin tan line on the cephalothorax extending down between the eyes. One other character of note, the legs are uniform brown, unlike the banded legs of most other wolf spiders. 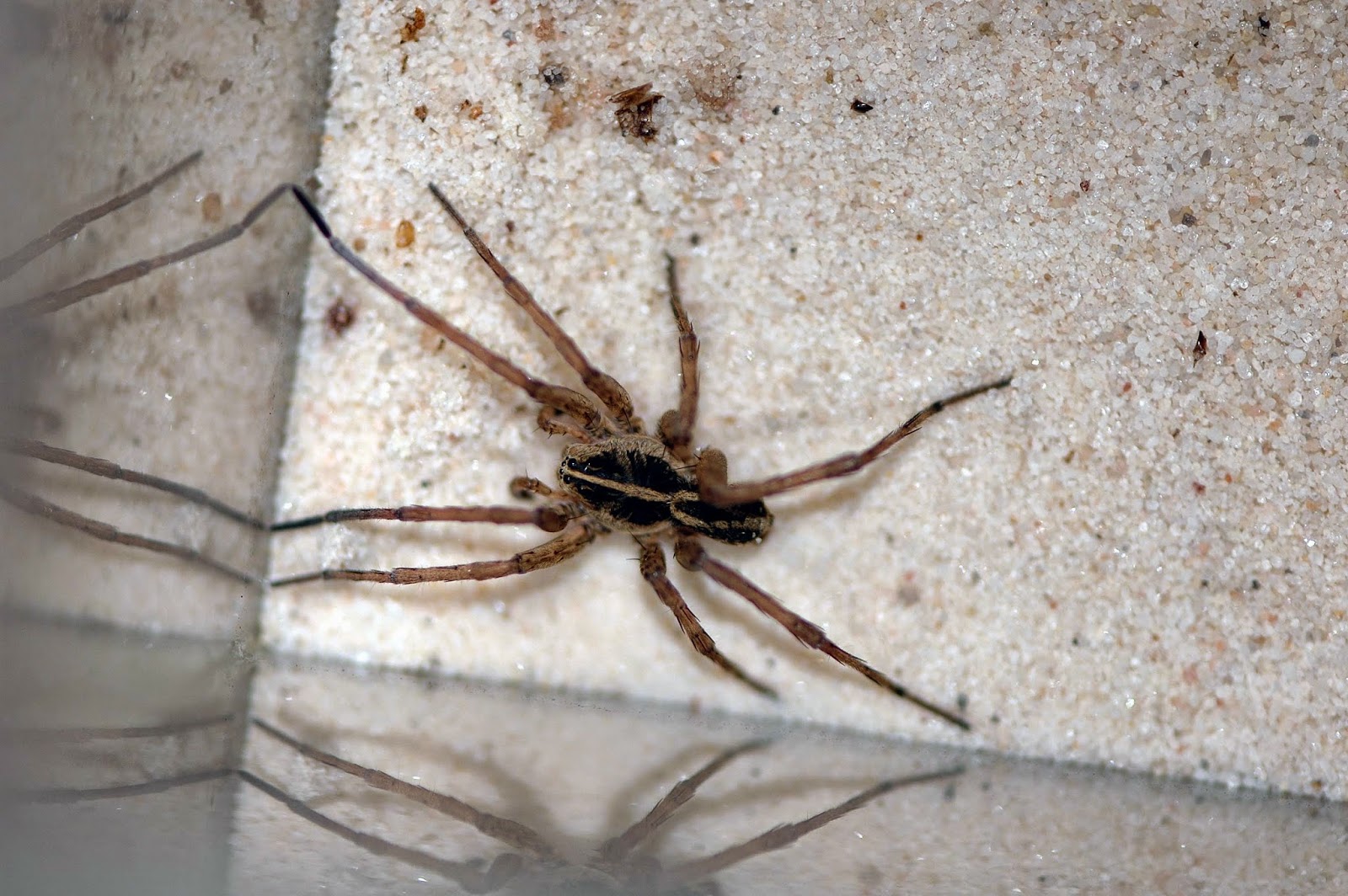 So what is this smaller, skinnier one? It's the male Field Wolf Spider. The tan thin line is much more obvious on him. Notice the cephalothorax is also rimmed in tan. This species is common in many moist habitats. 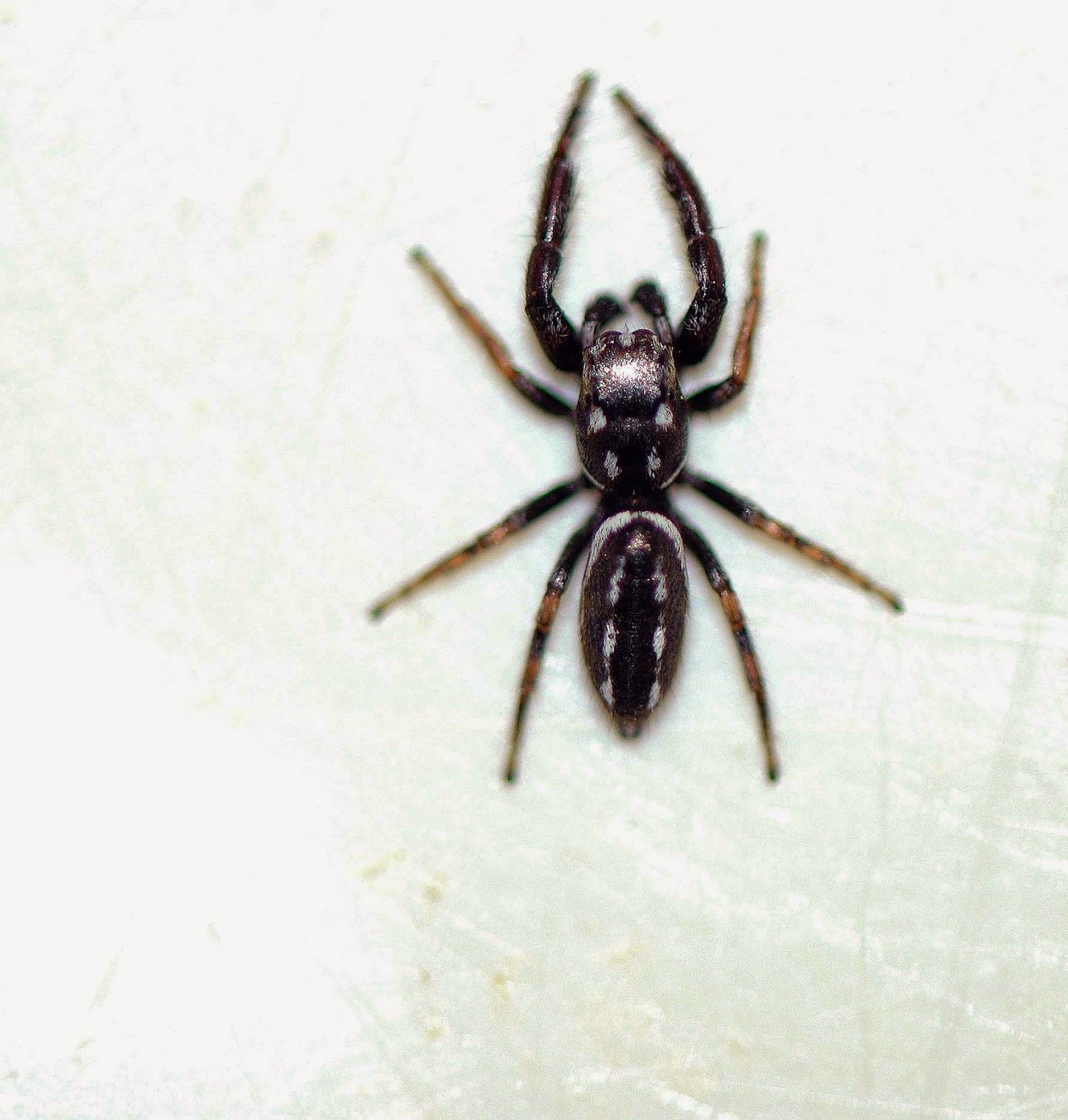 Also captured in a container is our third Jumping Spider of this post. This tiny guy is Marpissa formosa. It has no common name. Hmm, what should we call it. How about the Seven-spotted Jumper? There are three white spots up by the eyes, and four more on the back of the Cephalothorax. The abdomen is rimmed in white, and the center has two broken white stripes. Also notice the front pair of legs are darker and thicker than the others.

This is a male. The female has two brown stripes on the abdomen, and lacks any white spotting. While us men tend to sport a mustache from time to time, it's the female here who has a white mustache on her face. 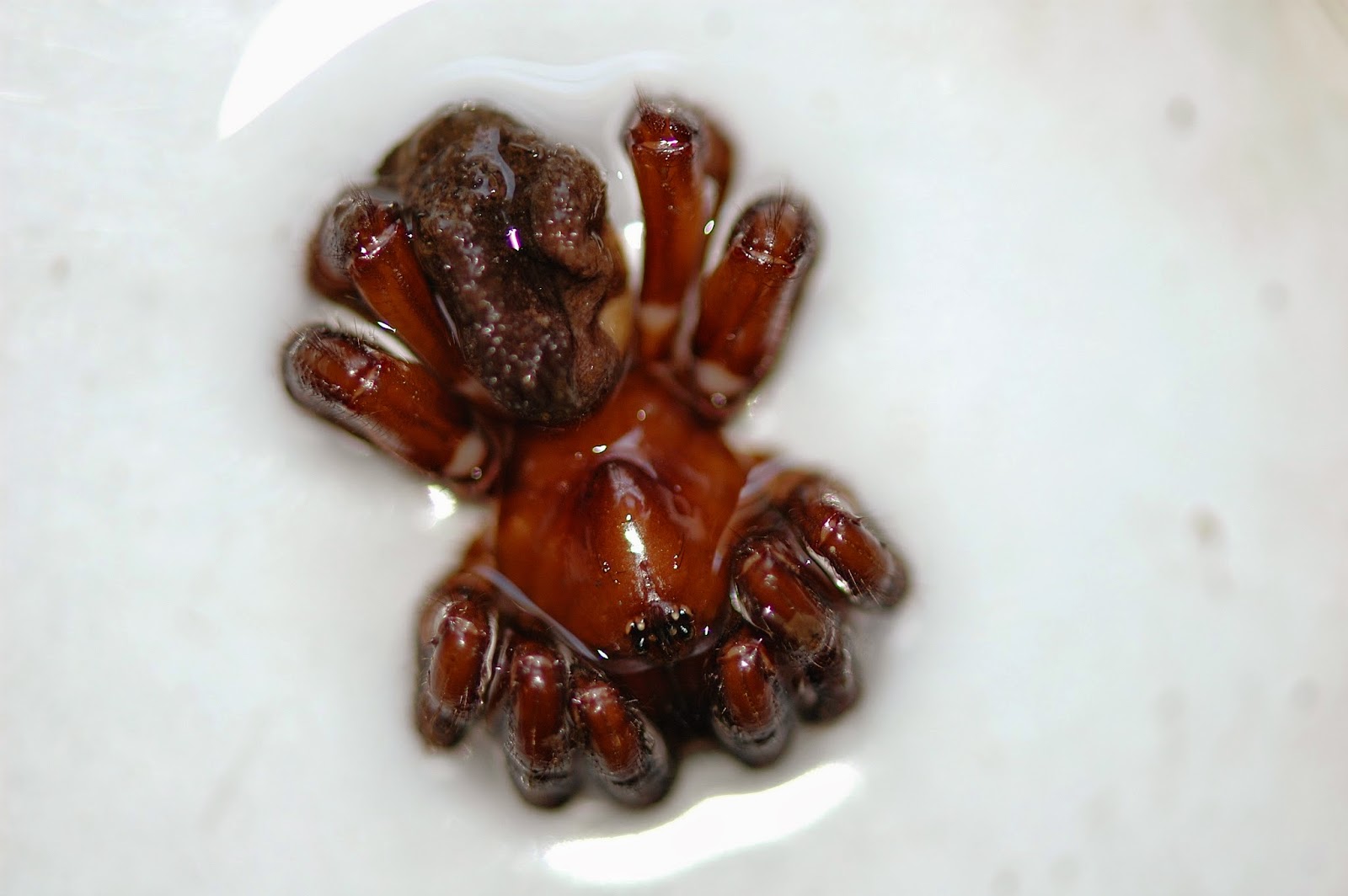 Eeewww! What the heck is this supposed to be? I put this on here to make a point. Even crumpled up spiders kept in an alcohol vial for years can still be identified by an expert. Turns out this is a Trap Door Spider, Ummidia audouini. The U shaped hump on the cephalothorax is key to this group.

These spiders make a tunnel underground, and hide the top with a manhole cover. They peek out and pounce on any prey walking by, then pull it down, and fold the door closed. If you ever get a chance to see them do this live, or watch a film, they are neatest things.

I'd like once again to thank the Ohio Spiderman, Richard Bradley for his help in verifying and/or correcting my identifications. Dr. Bradley doesn't just tell me what they are, but fills me with loads of information. I appreciate his going above and beyond in helping us amateurs.
Posted by DenPro at 4:33 PM No comments: