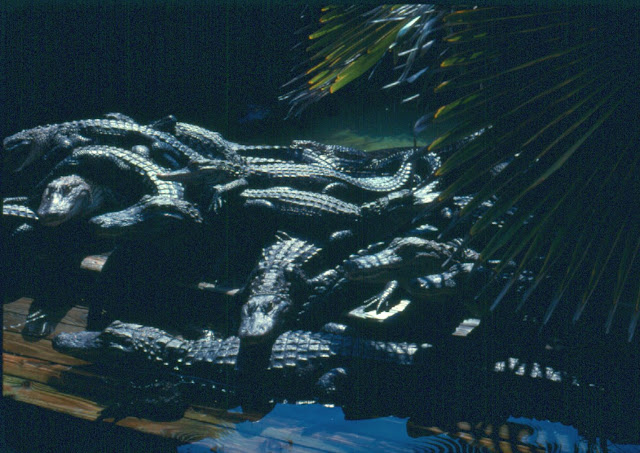 I've heard of leap frog, but leap gator? No thanks, I'm not playing.  I mentioned last month I would spend the winter scanning old slides, so as to have something to post now and then. While I can't take credit for this slide, what better way to start a Herps post. 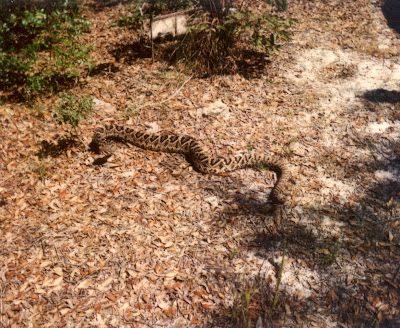 While working in Florida I did come across some other scary moments. This is a 6 1/2 foot Diamondback Rattlesnake that we had to remove from the swimming area. The striking radius of this thing was impressive, so we temporarily put a garbage can over it. It simply knocked it off! Instead of using a snake stick, we used a giant pool cleaner stick to lift it and remove it to another location. 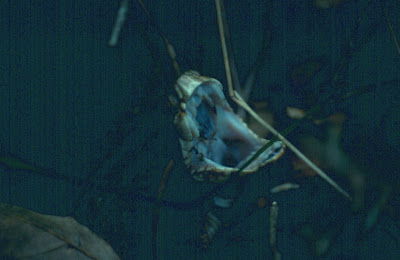 Not much of a shot you say? Try walking up to a Cottonmouth without a telephoto lens and get a picture.  Just call me thrill seeker. 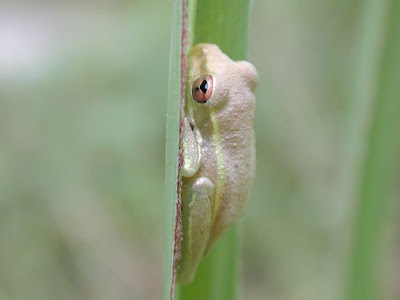 The Squirrel Tree Frog of southern Florida is a small yet highly variable species. The light stripe on the side of the back may be present or absent. The eardrum sometimes has a brown spot, and the overall color may vary from green to brown-green.  The more common Green Tree Frog is bright green and has a large distinct white stripe beginning below the eye and going down the side. Unfortunately these and other native frogs are being eaten by the invasive Cuban Tree Frog. 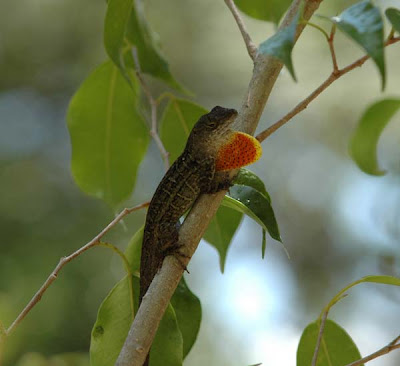 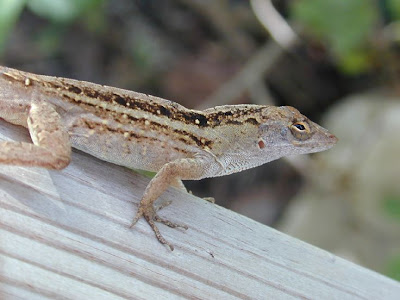 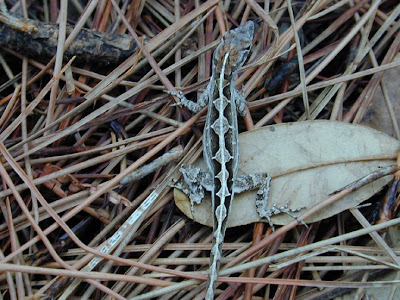 Watching the little green Anoles strut their bight throat patches is a sight disappearing in Florida also. In it's place is yet another invasive species. The larger and more aggressive Cuban Anole. They may be cute to keep as pets, but are not welcome in the wild.

This species will not only compete for the same foraging space, but will eat young green anoles. They have been around Florida since World War 2, and have now spread into the border states as well. Populations can be so numerous in south Florida as to see one per square yard. 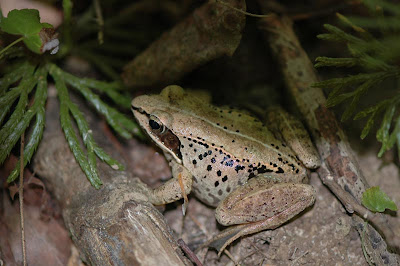 It's only February, but are we getting antsy for spring? Don't worry, some critters are getting close to popping out. Wood Frogs will be out earlier than any other soon, and some of the Ambystomatid salamanders like the Spotted will be out any time now. 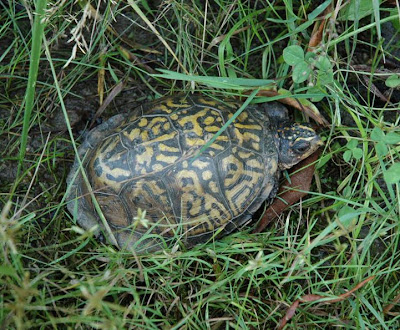 A lot of peoples favorite is the Eastern Box Turtle. This is a land turtle. It will feed on fungi, plant material or other animals. Being omnivorous, it can be found in most habitats. Males tend to have red eyes and a concave underside (plastron) for mounting the female. Females tend to have yellow-brown eyes and are flat underneath. They do make good pets, and an average life span can be 30-50 years. 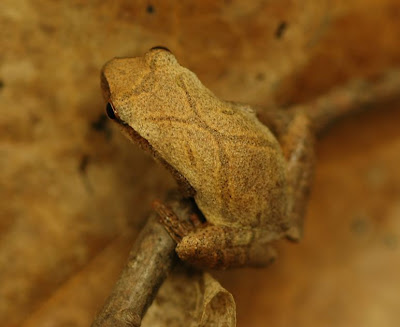 After the Wood Frogs come out, the next to appear is the Spring Peeper, Pseudopodia crucifer. The genus Hyla no longer applies to this species. A small frog easily identified by the brown X on the back. Their populations can number so high, that their "peeping" calls can be deafening. 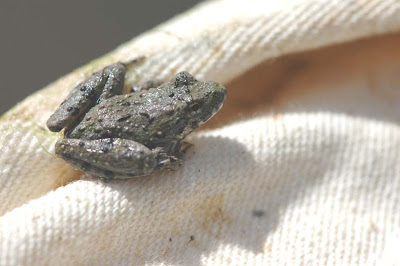 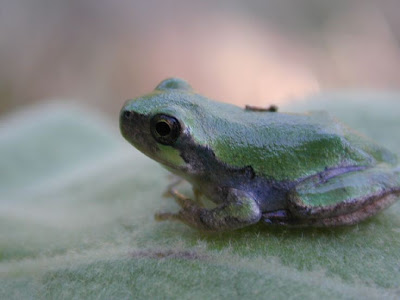 Both these shots were taken in Iowa. At one time I was told they were the same species. Through various communications, I think I know what was lost in translation. The first picture is that of a Cricket Frog, and in this case Blanchard's Cricket Frog. They are now considered the same species. They are small, about the size of a Spring Peeper, dull in color, and have bumps on the back, much like that of toads.

The second picture turns out to be Copes Gray Tree Frog, Hyla chrysoscelis. It is also small, no more than two inches. They have a brown streak running from the eye down to the legs. A lighter green spot is usually noticed below the eye. The back is smooth, can be all green, gray, or a mixture of both. They can change these colors right before your eyes. This frog can survive very cold weather, and can "cope" with temperatures below zero. 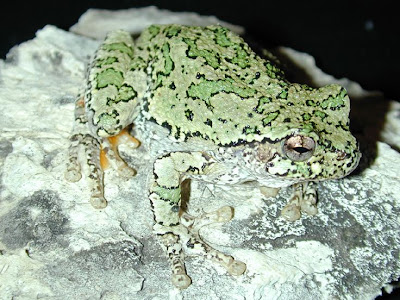 Here is the more common Gray Tree Frog, Hyla versicolor found in Ohio. It is much larger than Copes. It's trill is more guttural or deeper than Copes. Both species are excellent tree climbers, and while mostly nocturnal, can often be heard during the day. 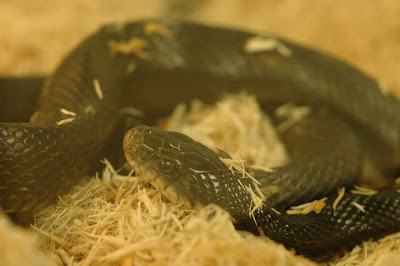 A black snake with a white chin. Could be a Rat Snake, could be a Racer. This is a Black Rat Snake. They appear all black but actually have faded white blotches throughout the body, which are easier to see near the head. They are very faint otherwise. Racers are completely solid black, and have a round body.  The Black Rat, being a constrictor, has a body shaped like a loaf of bread. Only when young are Black rat snakes heavily patterned. They are one of the longest snakes in Ohio, reaching 7-8 feet. 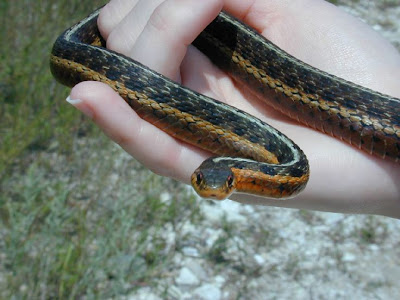 And who in Ohio has grown up without seeing our most common snake, the Eastern Garter. Recognized by the light stripe down the back and one on each side. These stripes may be white, yellow, or orange. In between these stripes are light colored zig-zag, stitch marks, or zipper marks interlaced among black blotches.  Two other garters are found in Ohio, the Plains and Butlers, but these are rare and in isolated areas such as wet prairies. 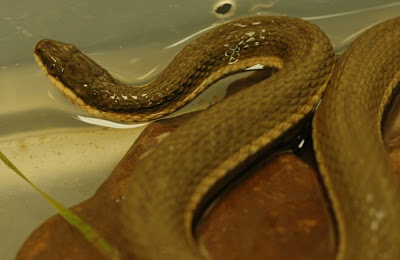 Speaking of aquatic diets, look for Queen Snakes in wetland environments. They are a true water snake and feed heavily on crawfish. They have a solid olive back, a wide yellow stripe deep on the side, and four black stripes on the belly. 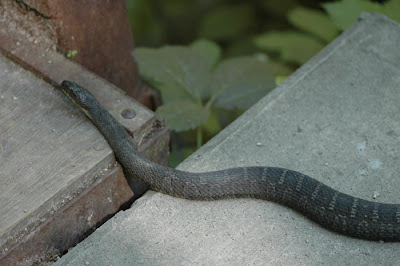 Sticking with the Colubridae, the Northern Water Snake, Nerodia sipedon, is our most common and largest of the water snakes. It is a thick, fat snake, reaching 4 1/2 feet. A row of dark blotches on the back alternate with lighter blotches on the side. The snake is actually much more colorful than this, especially when wet. I'm sure I have a better picture than this somewhere, but it's shots like this that frighten hikers.

This snake was beginning to cross a small bridge over a creek. It's unfortunate, but this guy has been mistaken for everything from a Water Moccasin to a Copperhead. It's bad reputation comes from the fact that it is very aggressive, and will continue to bite even after being in captivity for awhile. Its bite consists of an anticoagulant, meaning you may bleed more than normal from a bite, only adding to its reputation.

When cornered it flattens its head in a triangular shape, causing people to think it's venomous. Well, any non-venomous snake will flatten their head before striking, so that means nothing. It's the sheer length and girth of this snake that causes misidentifications. 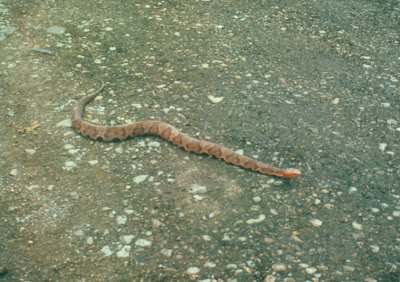 Just in case there are any questions, here's a Copperhead. Their orange and brown diamond patterns are distinct. These are still common in southern Ohio. Not as common is the Swamp or Massasauga Rattlesnake. It's small, non-aggressive, and found only in small concentrations in fens, bogs, marshes and  wet prairies. The large Timber rattlesnake, once common in southern Ohio, is now not only rare but endangered. These are the only 3 venomous snakes in Ohio. 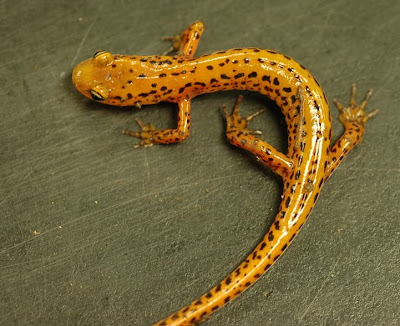 On the gentler side are some of the other amphibians. This is the Long-tailed Salamander. Recognized by the yellow or orange back. The scattered black pepper marks turn into rows of black bars on the tail. It has the longest tail of any species in Ohio. It's found throughout the unglaciated portions of the state. The only similar species is the Cave Salamander. It is red with black marks, but the marks to not form bars on the tail. Cave salamanders are restricted to a couple counties in the far south-west corner of the state. 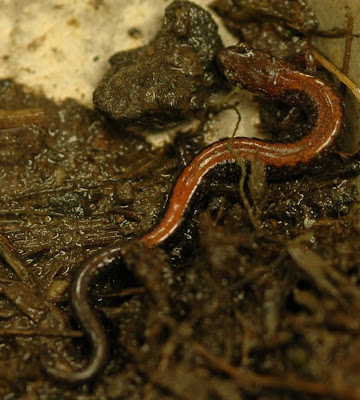 This little dainty guy is the Red-backed Salamander. Look for it in streams come spring, and under wet leaves and logs during the summer. In sheer numbers it is probably our most common species. I read a study where they estimated the numbers in the thousands-per-acre. Red-backs can also be all black on the back. 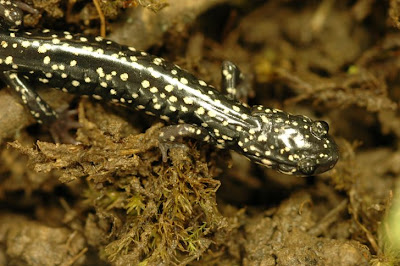 Looking like is was splattered with paint, the Slimy Salamander is all black with cream colored spots. It is a medium sized salamander. You will understand where the name comes from when handling it. But be careful, you should never handle amphibians with very dry hands. Slimy salamanders depend on their wet skin for protection, and other than their mouth, use that skin for breathing. 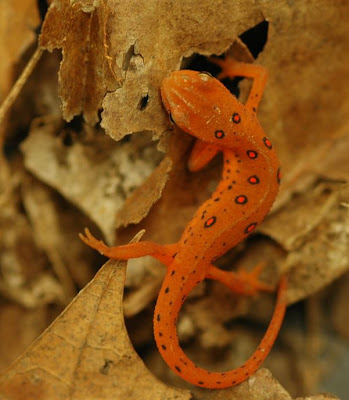 Another early spring arrival is the Red-spotted Newt. This is the land form, referred to as a Red Eft. Most salamanders hatch and grow larger in the water, leaving for land as an adult. Newts do the opposite, they hatch and leave the water right away. The Eft grows up on land, and the fire red color is a warning to predators that it's distasteful. Upon maturity it will return to water to breed, having kept the red spots, but changed the overall body color to yellow and green. 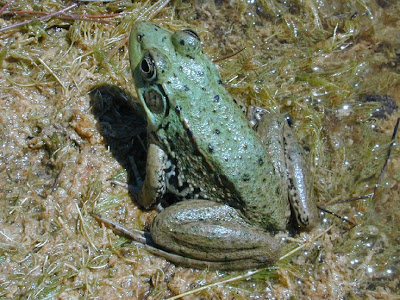 Green Frogs are the second largest frog in Ohio, behind only the Bullfrog. Bullfrogs groan when calling, a Green frog sounds like the strumming of a banjo. Both can be various shades of green, so the best way to tell them apart, (especially when you have only one photo) :) is by the raised ridge of skin going from behind the eye down to the legs. In Bullfrogs, the raised ridge of skin curves down at the eardrum, and the back is all smooth. 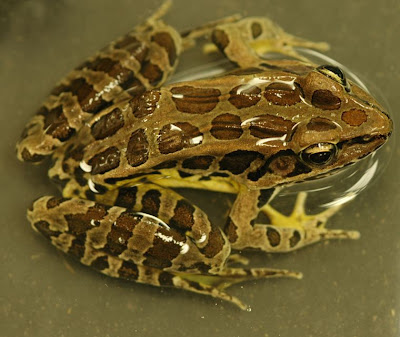 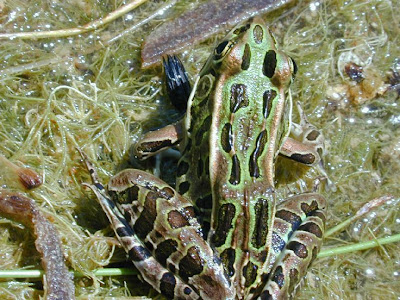 Two other similar looking species are the Pickerel Frog (upper) and the Leopard Frogs (lower). The Pickerel and Northern & Southern Leopards are common throughout Ohio. The absolute way to keep them apart is to look underneath. The Pickerel is yellow to orange underneath, primarily under the hind legs. The Leopard frogs are all white in the hindparts. Oh yes, as for "keeping them apart" one can take that literally. When keeping frogs as pets, Pickerel frogs should be isolated from other species, as they can emit a toxin into the water.

There are several other ways to separate these species for identification, none of which work all the time. It's said the spots on Leopard frogs are more oval, but more rectangular on Pickerels. Those spots are often bordered by green on Leopards, and by black and white lines on Pickerels. The spots on Pickerels are usually in rows of two, and more alternate or uneven on Leopards. I think you can see these characters are highly variable. 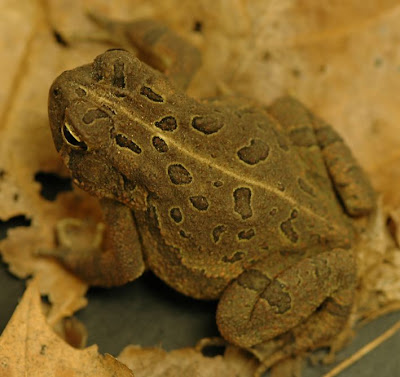 Not counting Spadefoot Toads, the two most common toads in Ohio are the American and Fowler's Toad. They look alike, and this one is a Fowler's. Some say you can tell them apart by the amount of dark mottling on the chin or belly, but this is unreliable. Look at the dark spots on the back. In Fowler's each of these contain 3-4 bumps, or what people call warts. In American toads it's 1-2 warts per spot.
American toads call with a high pitched trill, somewhat like that of a Screech owl. Fowlers Toads are loud and obnoxious. It sounds something like "rahhhhhhhhhhhh" Okay, so much for imitating something in writing. 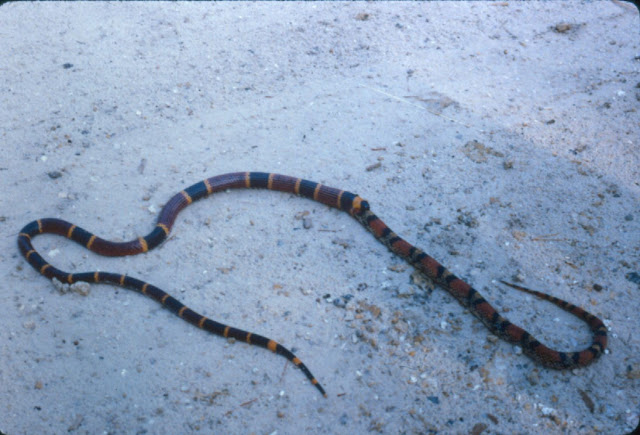 Since I started with an extremely interesting slide, why not finish with one. As I mentioned in my water bird post, there were many slides we used at Blue Spring to give programs with. Some we could acknowledge the photographer, others like this, we had no idea who took it. Here is a Coral Snake devouring a Scarlet Snake. Had this been a Scarlet King Snake, the rolls may have been reversed. An interesting side note, I have recorded all three species in the park in a single day.