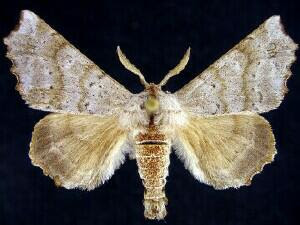 There are two species of Apatelodidae moths in Ohio. This is the Angel, Olceclostera angelica. 7665
A gray moth with two curvy brown stripes in the wing. Apatelodids sit with their wings flat over their body in a triangle shape.They often stand on their head and hold the abdomen up in the air. The wing margins are scalloped or uneven. Members of the family have one or two white, somewhat translucent spots, near the edge of the upper wing. 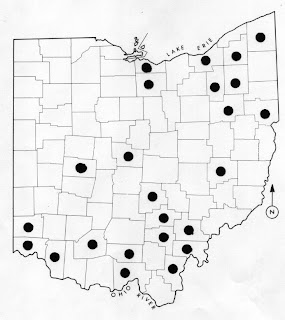 As with previous moth posts, all pinned specimens are the property of Jim Vargo. The live shots are mine, unless indicated otherwise. The numbers reflect the Hodges checklist. 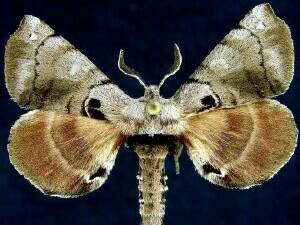 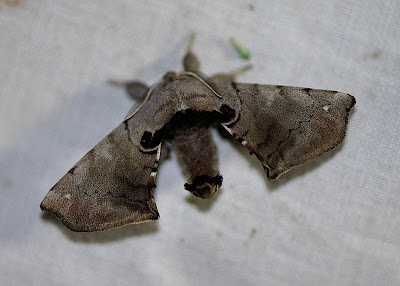 7663 Apatelodes torrefacta. Called the Spotted Apatelodes, I have always known it as the Wild Cherry Moth. I see this more often than the previous one. Another gray winged species, the key difference is the black stripe near the base of the forewing. Large black spots on the wing and thorax are also distinct. The hindwing is rust colored. When at rest, they often keep those hind wings hidden. It's a cherry, oak, and maple feeder. 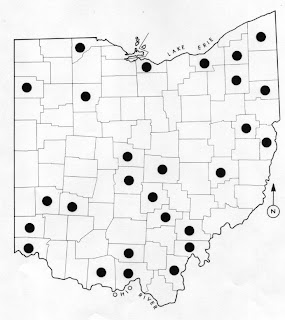 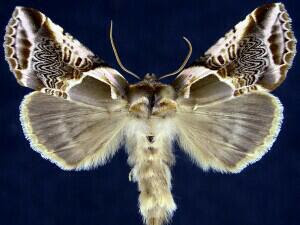 Thyatiridae moths. To me they have a mix of both Prominent and Noctuid characters. The best way to distinguish them is to simply learn the species. There are only four in Ohio. This one is Habrosyne scripta, the Lettered Habrosyne, 6235. More common in northern Ohio, it has a wide range from coast to coast in N.A. I would expect to see this in other parts of the state. 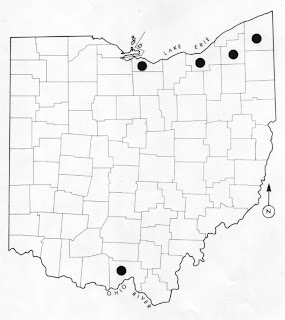 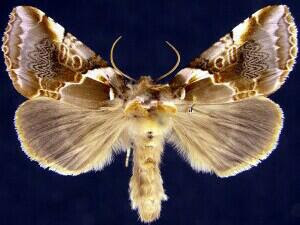 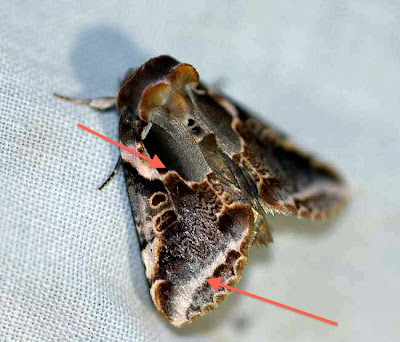 Habrosyne gloriosa, the Glorious Habrosyne 6236, is the more widespread species in Ohio. It is nearly identical to Lettered, with a couple subtle differences. The white line bordering the large gray patch is bent in both species. In gloriosa it forms a nearly square or 90 degree break. In scripta it is only slightly bent. The pink-white line that borders the wing edge is straight in gloriosa, and more curved or boomerang shaped in scripta. 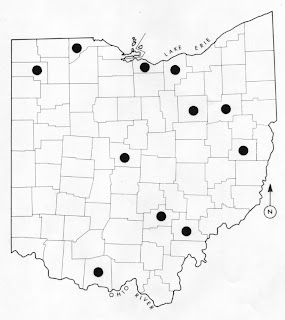 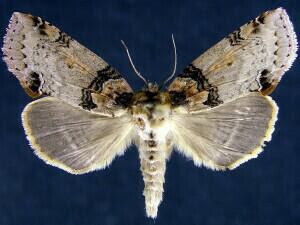 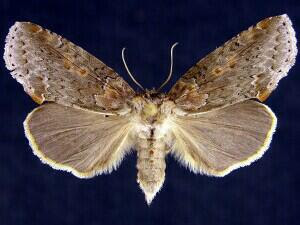 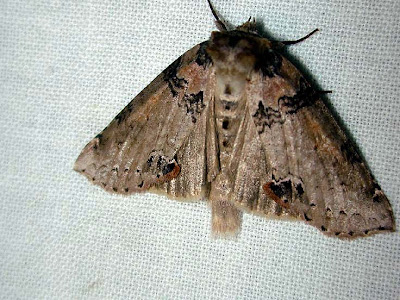 6237 Pseudothyatira cymatophoroides, the Tufted Thyatirid. This moth occurs in two color forms. The black marks may be present or absent. It's call tufted for two reasons. When at rest you can see a tuft of hairs on the thorax sticking straight up. Also, follow the outer forewing down to where it meets the hindwing. Notice a "tuft" of rusty scales. These also stick out on the moth when the wings are folded. 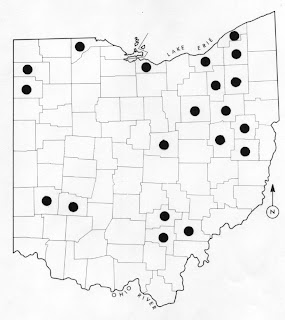 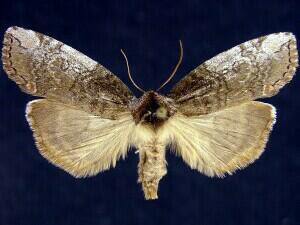 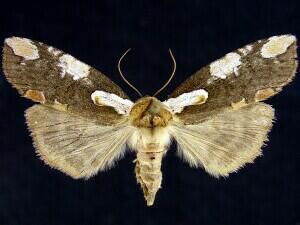 6240 Euthyatira pudens, Dogwood Thyatirid. Another species with two color forms. Easy to recognize with the big white spots, even the lighter form still shows some of the same spots. In fresh specimens, those white spots are often tinted with pink. 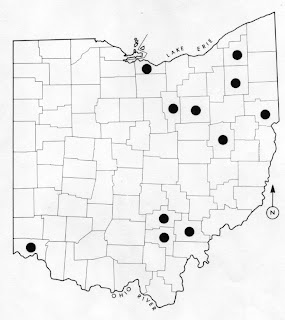 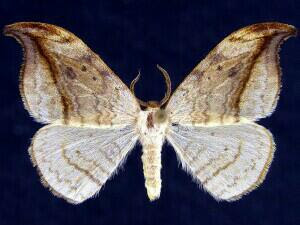 The Drepanidae family, commonly known as Hooktip Moths. You can see the wing tips curve into a sharp fish hook shape. That is typical, but not all species show those tips. Seems there are always exceptions in every group. This one is Drepana arcuata 6251, the Arched Hooktip. Yellow-brown in color, often lighter on the outer portions, with a dark curved line up the middle. A thinner brown line often borders the thicker one. These moths can easily be mistaken for Geometrid Inchworms, but have a shorter stouter body. 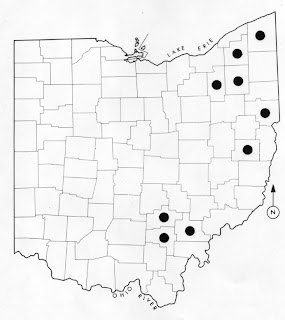 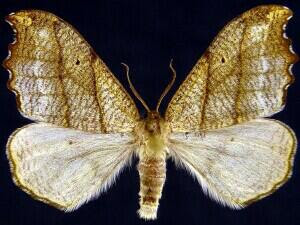 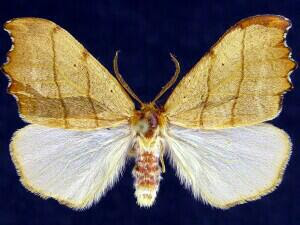 6252 Drepana bilineata, the Two-lined Hooktip. Like the previous, there is a yellow-brown look to the wings. In the first form, a net-winged appearance is also helpful. The hook-tips are there, but the wing margin is more scalloped in this species. Whether a light or dark form, the name tells you what to look for, two widely separated brown stripes. This species is found primarily north of Ohio. 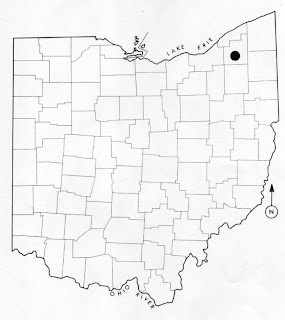 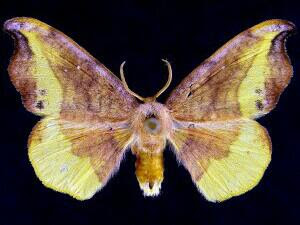 6255 Oreta rosea, Rose Hooktip. Although the center is still a brown color, the yellow makes this easy to recognize. The hook itself may be dark brown to purple. Occasionally this species will be found in an all orange form. 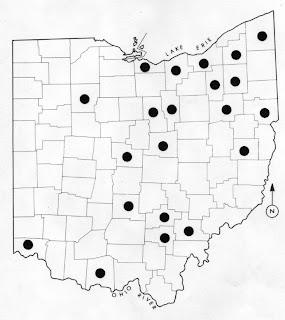 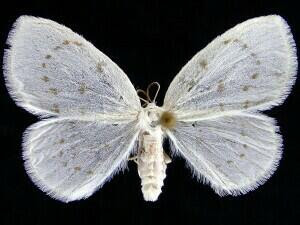 6253 Eudeilinia herminiata, Northern Eudeilinia. This is one of those species that lacks the hooked tip. Look for a dark chain like pattern on both sets of wings. Again, those short stout bodies help in separating this from several white Inchworm lookalikes. This species is found in every state surrounding Ohio. So look for it in places besides the northern counties. Not much of a common name, but it's called northern because there is a nearly identical species in Florida. On that one, the dark spots are a lighter yellow-gold. 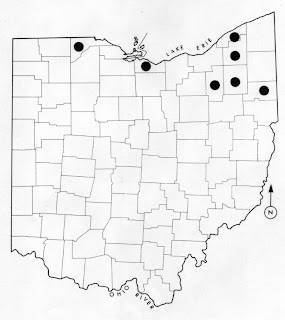