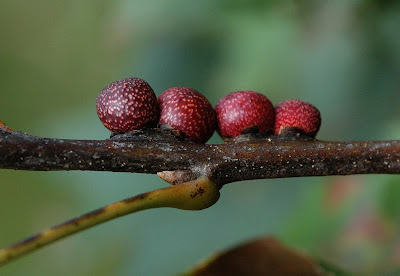 Back in September 2010, I posted a feature on plant galls here. I have come across a lot of others since then, and decided it's time for part 2. Some of these I pulled from other misc. posts, but the majority are new. I'm no authority on galls, and references are not easy to come by. I always welcome an expert to correct anything I post, but there aren't a lot of people who work on them.

These spotted little cherries look like the Banded Bullet Gall, created by Dryocosmus imbricariae, a tiny wasp. This was found on Black Oak, but they attack other species, especially Shingle Oak. Some of the common names in this post I simply made up because they often don't have one.

Here is another Bullet Gall on Bur Oak. A Disholcaspis wasp, probably quercusmamma.

Also found on Oak, I call this the Brain Gall. That sounds a little better than calling it the 'intestinal gut' gall. Again, created by a wasp, possibly the species Amphibolips coelebs.

These fuzzy clusters look like Flake Galls, created by a Cynipd Wasp from the genus Neuroterus. 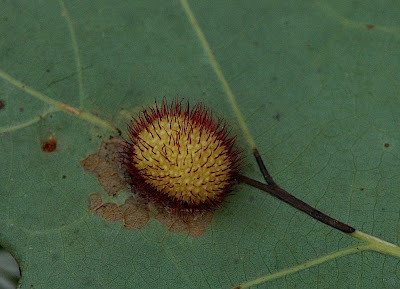 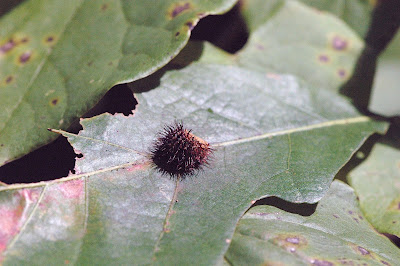 This is one of a number of species I refer to as Spiny Hedgehog Galls. The yellow gum drop covered in red hairs makes this wasp Acraspis erinacei. Pictured are both new and old galls. 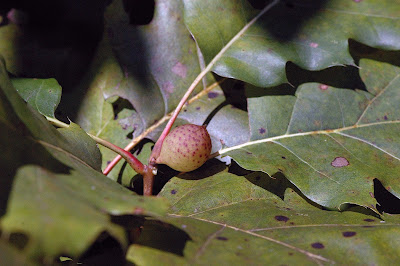 Similar to the green Oak Apple Gall, I call this the Spotted Apple Gall. It too is created by a parasitic wasp known as Loxaulus maculipennis. 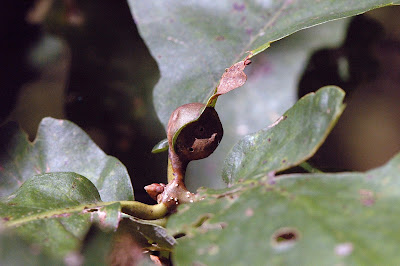 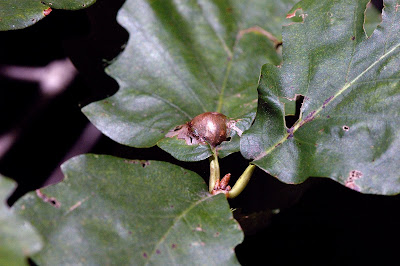 Here's a gall that grows on the leaf stem of oak trees. Because they turn hard and brown like so many other galls, this one was a bit difficult. To me it looks like the Oak Petiole Gall, Andricus quercuspetiolicola, a parasitic wasp. 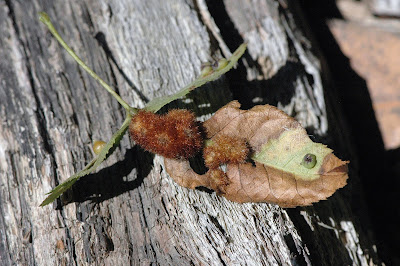 It's not everyday I come across a gall on Hickory that looks like a Woolybear caterpillar. Another species that was hard to narrow down. I could only find one source for an answer. I believe these are created by a Fly called the Hickory Midge Gall, Caryomyia purpurea. 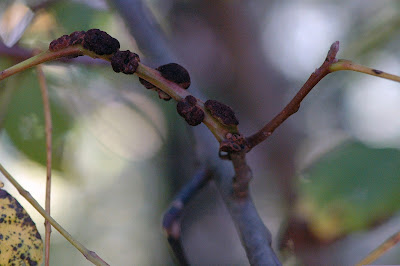 I pictured these in the original gall post with spring time shots. Early in the season they are green and yellow. By late summer they have turned brown and rigid. These are from Aphid relatives known as Adelgids. They infest the rachis of Hickories. 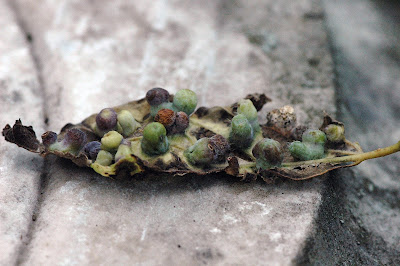 These "hairy warts" were also pictured in the other post, but with only a few examples on the leaf. I wanted to show just how plentiful they can be on a single leaf. These are from Hackberry Psyllids, also relatives of Aphids and Adelgids. The species is Pachypsylla celtidismamma. 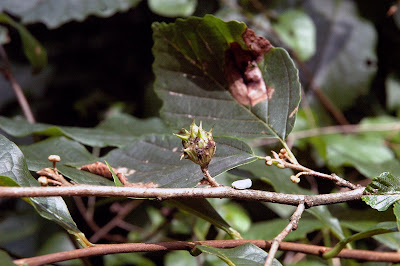 Hamamelistes spinosus, an appropriate latin named for the Spiny Witch-hazel Gall. These are created by Aphid colonies. If you don't look closely at them, you may mistake them for Witch-hazel fruit. Also don't be surprised if you see Ants walking all over them. They are looking to feed on any honeydew that may seep out from the aphids inside. I also discussed these in the original post, but pictured very old galls. These light colored ones are new.

This week I had students open one up. They found Ants on the inside feeding off the Aphids.


This is Green-headed Coneflower, Rudbeckia laciniata. It's a common species of moist woods edges. 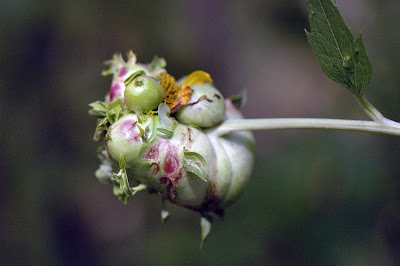 What grabbed my attention about the flowers were the bulges at the top of several plants. These are insect galls created by a Midge Fly with a tongue twister of a latin name, Asphondylia rudbeckiaeconspicua. 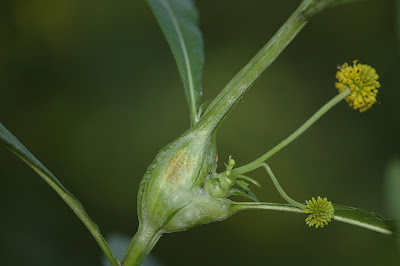 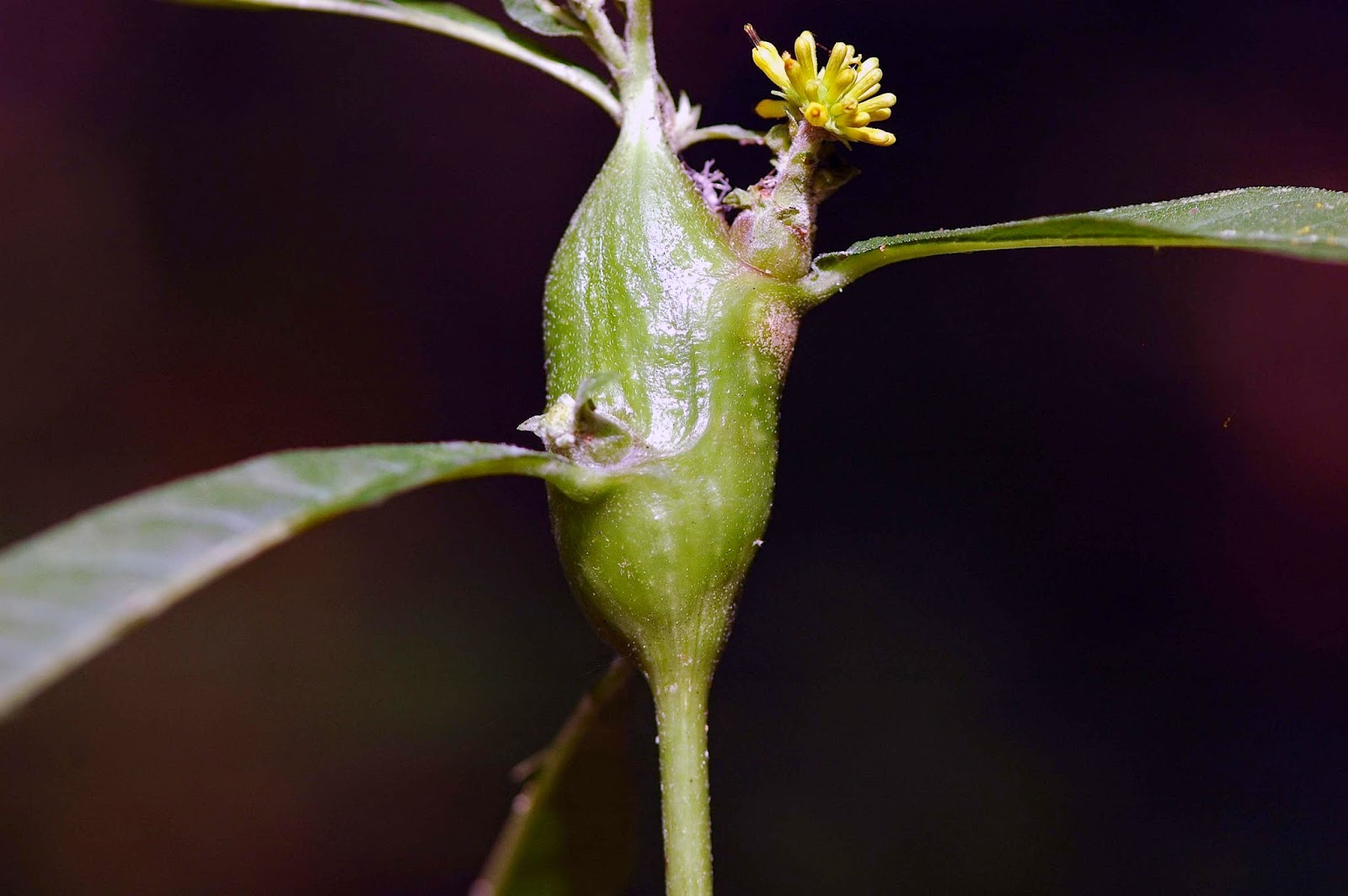 Growing along riparian zones throughout the late summer is a wildflower known as Wingstem. Herbaceous plants are just as susceptible to galls as woody plants are. These are created by Gall Midge Flies from the genus Neolasioptera. N. verbesinae forms bulges on the main stem, while N. incisa forms galls on the side branchlets. John Plakidas provided the information on this group at Bugguide. 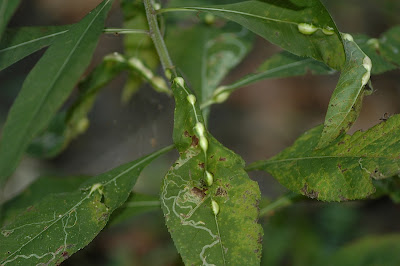 Still trying to figure this one out. These swellings on a Eupatorium, look similar to the ones on Ash leaves in the spring. Those are from a Midge Fly, and I suspect these are also. Those squiggly lines on the leaf surface are formed by leaf miner moths and flies, these being most likely a species of fly.

This looks like a cluster of Caesar stuffed eggs. Ya, well that's my imagination running wild again. It's another oak gall from Dryocosmus deciduus, a Gall Wasp. 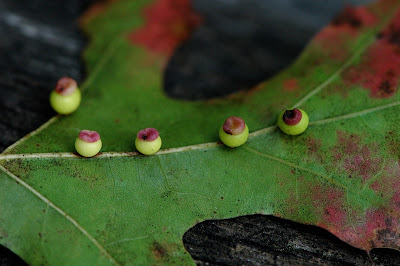 These colorful little guys fit into one of two types. They look a bit like Pumpkin Galls. But because of the two toned color and the raised tops, I think they are Kernel Flower Galls produced by another wasp Callirhytis serricornis. Depending on your perspective, galls can look cute or just plain weird. 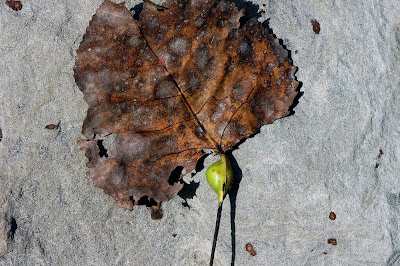 Cottonwood Petiole Gall. These are created by Aphids in the genus Pemphigus. Perhaps a more appropriate name would be the Poplar petiole gall, as they also occur on Aspen and other Poplar trees. This one is most likely P. populitransversus. If this gall had lines on it, it would be from a moth. If the gall was further up on the leaf, that would be another species of Aphid. 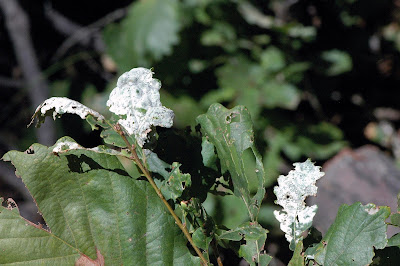 I will probably add more galls to this post as I find them. As a sidelight, this intrigued me. It is not a gall or a rust to my knowledge. I'm waiting on confirmation of this, but I wonder if it's not what is known as Powdery Mildew, a fungus. Thanks to Joe Boggs of OSU Extension for verifying this is indeed powdery mildew on oak. 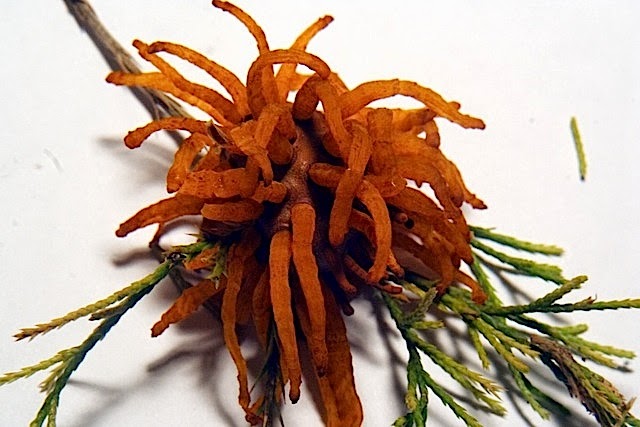 A student sent me this photo of Cedar-apple Rust, Gymnosporangium junipervirginianae. These are often mistaken for galls, but are actually fungi. Rusts live their life out on two separate hosts. These orange octopus tentacles are the sexual stage that release the spores. 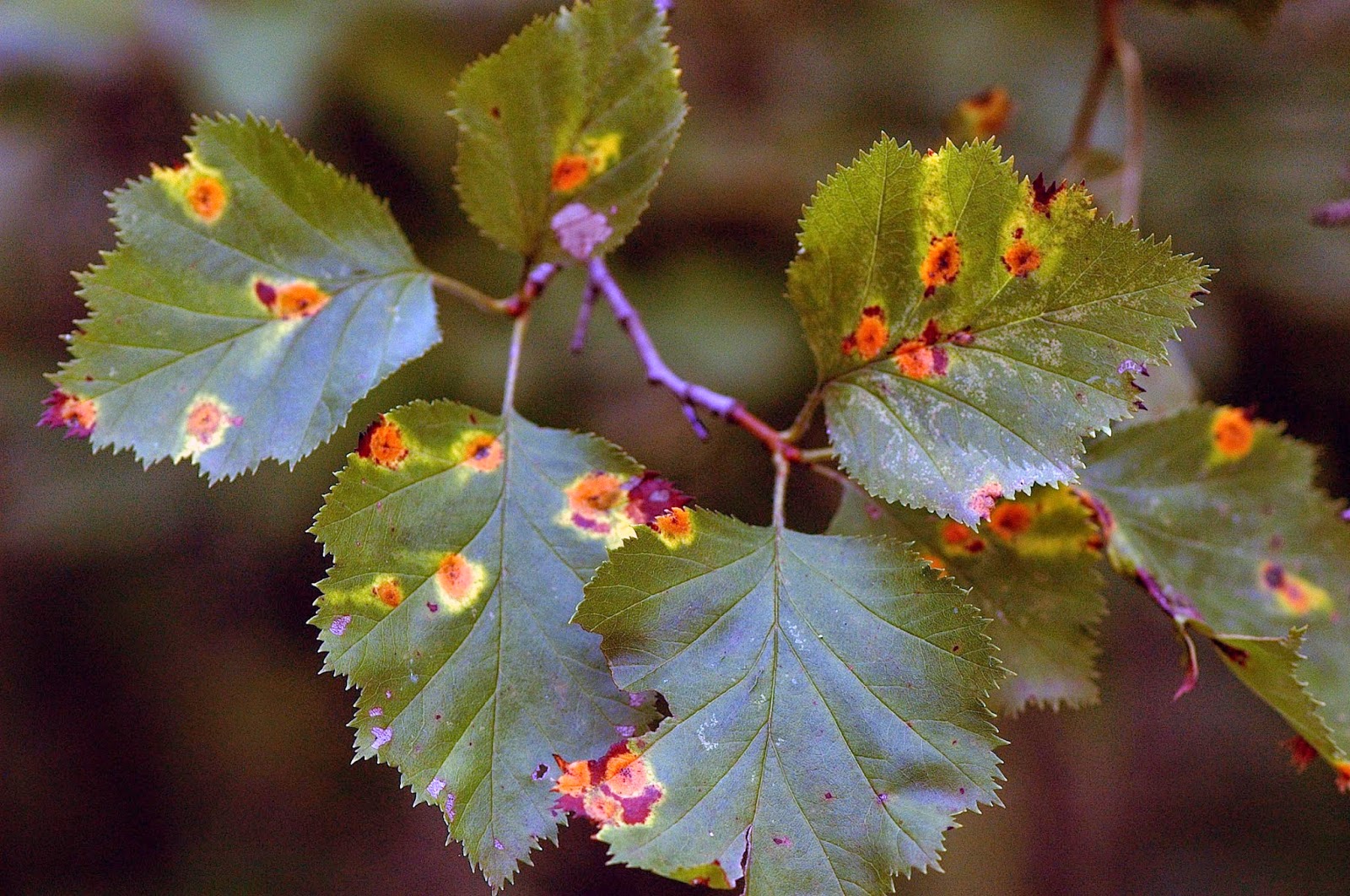 I knew the other stage was spent on members of the Rosaceae, and thought this might be it. Turns out this is Hawthorn Spot, Gymnosporangium globosum, a closely related species. 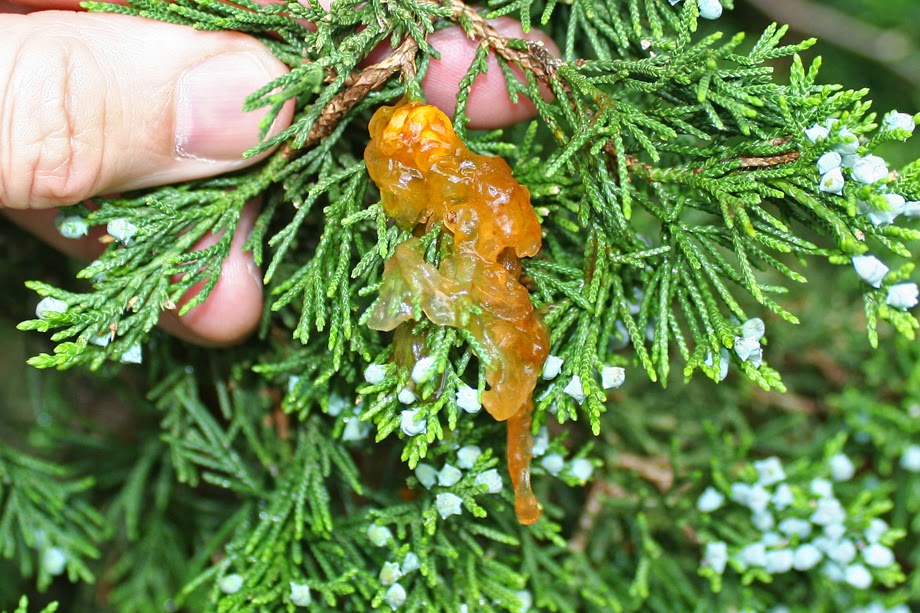 The Hawthorn spot, or Hawthorn Rust, can best be described as looking like the Cedar-apple Rust that has melted. Thanks again to Joe Boggs for sending this photo and explaining the difference between the two cedar/juniper rusts.
Posted by DenPro at 11:48 AM