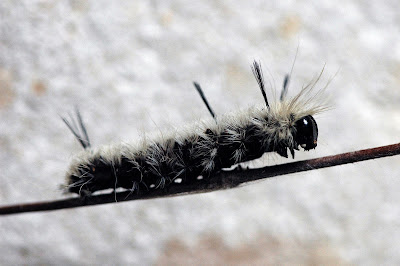 What a title for the holiday season, but I bet it got your attention. With finals being over, I can finally catch up on a few posts. These photos are not the greatest, but consider everything here is dead. It's a short post, but I'm fascinated with the subject matter.

This looks like a normal moth caterpillar, but upon approaching it, it appears 'frozen solid'. Braconid Wasps of the genus Aleiodes have attacked it. They feed on the internal portions of the host. Just before pupating they chew minute holes in the bottom of the caterpillar and emit a sticky glue like liquid that hardens and keeps the host firmly attached to the twig. Some Braconid and Ichneumon wasps form cocoons on the outside, but the mummy wasp Aleiodes pupates inside. 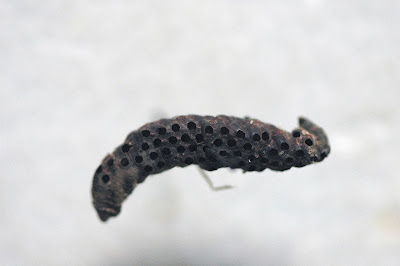 Like a scene from the movie Alien, they chew through the skin of the dorsal region and pop out as adult wasps. 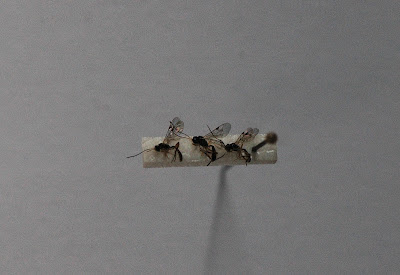 Here are the wasps I hatched out from the caterpillar above. There are about 100 species in this group found in North America. Many are species specific to certain caterpillars, but I haven't delved into this far enough to give an exact species name. 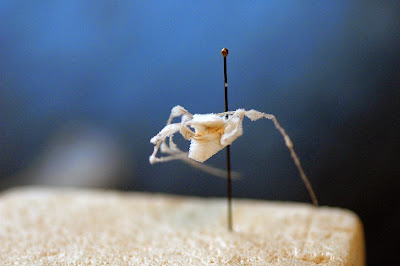 This strange critter is a mummified Harvestmen. Torrubiella is an Entomophagous fungi, meaning it attacks Arachnids and Insects. Spiders and Daddy-longlegs are particularly susceptible because they are soft bodied. The hard exoskeleton of insects are more difficult to penetrate. Hemiptera, in particular the Homoptera group, leafhoppers, planthoppers, scale, etc., are known to get this fungus. 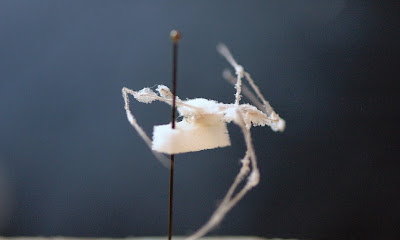 The spores land on the host and penetrate the body. Toxins are released that kill the animal, and then the fungus absorbs the bodies liquids. The fungus contains antibiotics which prevent other pathogens from invading the corpse. The mycelium spreads and then forms reproductive structures at the weaker points of the body, such as the leg joints of this harvestmen. 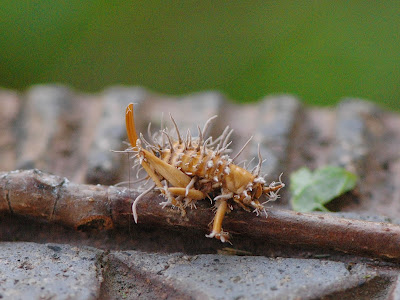 Another body invading fungus is Cordyceps. They are known to attack at least a dozen different orders of insects. This is a Carolina Leafroller, Camptonotus carolinensis, a katydid relative. 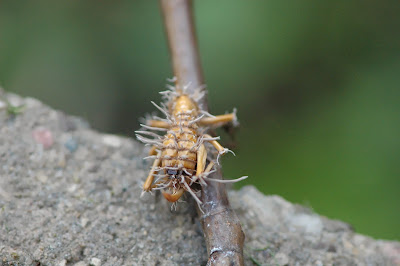 The dark spot at the base of the abdomen, and the long ovipositor verify this as a female leafroller. Cordyceps fungi may be more familiar to some with regards to ants. This is the same genus that affects the brains of certain ants, turning them into zombies. They climb to high points on vegetation, then the fungal spores spring out of their head. Infected ants are recognized by the colony, and individuals are removed so they won't cause the entire population to die. 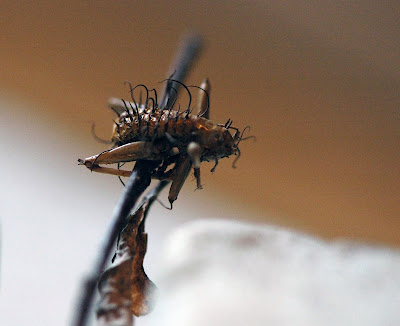 I actually got to watch these fungal hyphae grow from a couple millimeters to over a half inch in length.  They start white and turn black with age. They erupt from every joint or seam in the body, head, thorax, abdomen, and appendages. Most of these fungi are species specific, attacking only one type of insect. 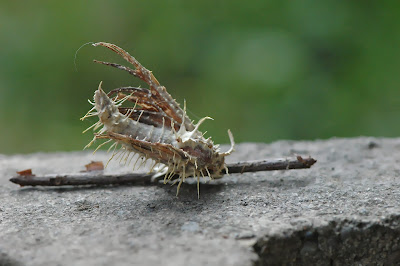 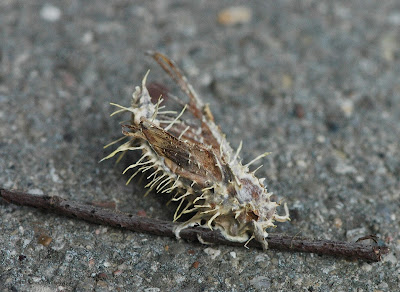 Here is a sphinx moth, the Lettered Sphinx I believe, Deidamia inscriptum, mummified by another type of fungus. In this case it's Akanthomyces fungi, known to favor moths and beetles. The biology is similar to other insect attacking fungi. The white mycelium spreads both internally and externally. This fungus spares no part of the body, even sending out spores through the wing veins. 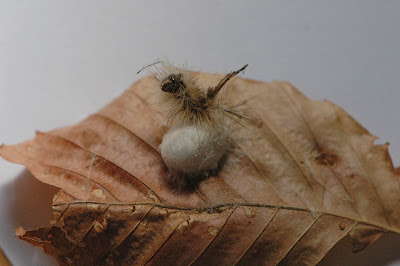 I'll finish the way I started, with a parasite. This shriveled up caterpillar, and the cocoon below, may be caused by Cotesia, a parasitic wasp. Unlike the earlier wasp I mentioned, these tend to bore out the sides and bottom of the body. They form a large wiggling mass beneath the caterpillar. Talk about the walking dead being zombiefied, the caterpillars brain is so messed up by this, it actually starts spinning a cocoon around the wasps themselves! The caterpillar provides protection for the very critters that end up killing it.

Side note: I found the biology of this amazing, BUT, this may be nothing more than the caterpillars OWN cocoon. Some moths and butterflies leave a shriveled up portion of their skins before pupating into a cocoon or chrysalis. I've had this specimen for a couple years, and nothing has hatched out of it. Next time I find one, I'll have to open it up and look inside.
Posted by DenPro at 1:46 PM No comments: