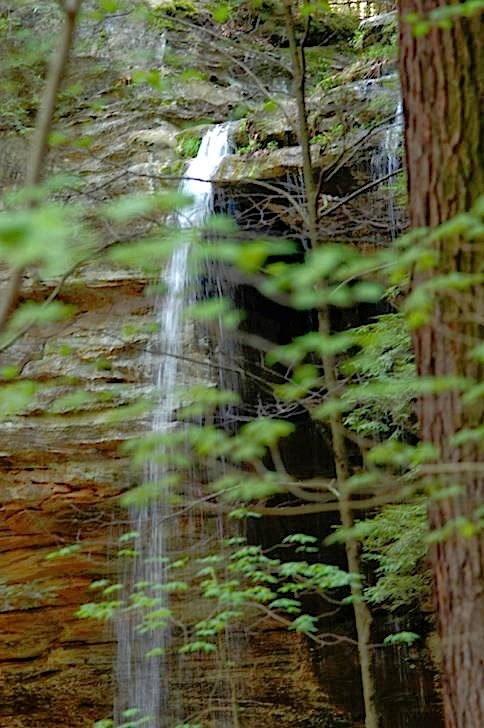 Ash Cave is one of the Hocking Hills State Parks located in Hocking County Ohio. It's known for its geological formations and a spectacular waterfall. The Hocking Hills contain glacial remnant forests usually found much further north. The gorge is full of towering Tuliptree, Liriodendron tulipifera, Eastern Hemlock, Tsuga canadensis, Sycamore, Platanus occidentalis, American Beech, Fagus grandifolia, and Sugar Maple, Acer saccharum. The rim is blanketed with Hemlock trees, and the upper slopes are a mix of Oak and Hickory. I've recorded 70 species of woody plants and nearly 100 spring wildflowers at Ash Cave.

Black and White Warbler
While working at the park back in 1980, I noticed a high number of Northern Parula Warblers, Setophaga americana, and Black-throated Green Warblers, Setophaga virens. They weren't just passing through, but apparently nesting. These two species are few to absent in many of the other forest types in the surrounding counties, at least in the numbers found here. I wondered what other species might be present, so I decided to make a count of all the warblers found at Ash Cave.

Black-throated Green Warbler
Surveys were conducted in 1980 and again in 1981 between 7:00 and 9:00am. The route included the picnic area, gorge trail, rim trail, and part of the Buckeye trail behind the falls. Birds were recorded by both sight and song. Soon after the project I moved out of state, and never did anything with the data.

Canada Warbler
Years later I returned to the area and asked Pat Quackenbush, naturalist for Old Man's Cave and surrounding parks, if he would like to participate in repeating the surveys. I wanted to see if the diversity had changed over the 25 years. We gathered data using the same methods as before. With both of us busy with other projects, we hem-hawed on what to do with the results. Before we knew it, another 5 years had passed. So in 2013, we did it again. Now we can compare over a 30 year period.

Hooded Warbler
The three most common species were Black-throated Green, Parula, and Ovenbird, Seiurus aurocapillus. If we were to compare 1980-81 to 2005-06 & 2013, their numbers have declined by over 50%. The Cerulean Warbler, Setophaga cerulea, has gained a lot attention, showing the most rapid decline of all in North America. In 1980-81 there were 14 records. In 2005-06 we saw 2, and last year zero. Cerulean, like the Kentucky Warbler, prefer broken canopies, and a multi-layered understory. With the maturity of Ash Cave forests, it may no longer be favorable to these species. (Jim McCormac personal comm.)

Ovenbird
So what's happening? Succession of the old fields on either side of the picnic areas have made the habitat unsuitable for species like Prairie, Blue-winged, Yellow Warbler, etc. The hardwoods in the canopy can survive for several hundred years, and the Hemlocks easily twice that. So the vegetation through most of the park, including the understory, has remained the same over the years in regards to the plant species. It may simply be the forest structure has changed.

Yellow Warbler
Why does the understory still have Ovenbirds and Waterthrushes, but not Worm-eating Warblers? If they forage throughout the woods, their behavior should not have been affected. Has there been too much soil compaction from off trail hiking? Perhaps visitation in the park has reached numbers that are uncomfortable for this species to nest on the ground here. The same could be asked of the Hooded Warbler, which also prefers understory. Surveys often end up asking more questions than they answer.

Prothonotary Warbler
Other causes include the deforestation of tropical sites these birds overwinter in. The increased number of windmills, cell phone towers, and building collisions take their toll during migration. The change in land use in our country. Increased Cowbird parasitism is another factor. Pesticides, destruction of wetlands and riparian zones, climate change, and cats! (Don't get me started on that one). The list goes on and on. It's probably not one cause, but a combination of factors. 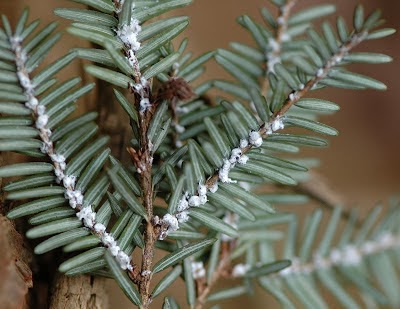 Locally, another threat looms on the horizon. The Hemlock Wooly Adelgid, Adelges tsugae, a piercing sucking insect that has wreaked havoc on the hemlock trees of the Smoky Mountains. Though not yet at Ash Cave, it has been found in the Hocking Hills region. The loss of Eastern Hemlock from the park would surely cause an even more rapid decline of species diversity.

Pat and I have written this up for publication. 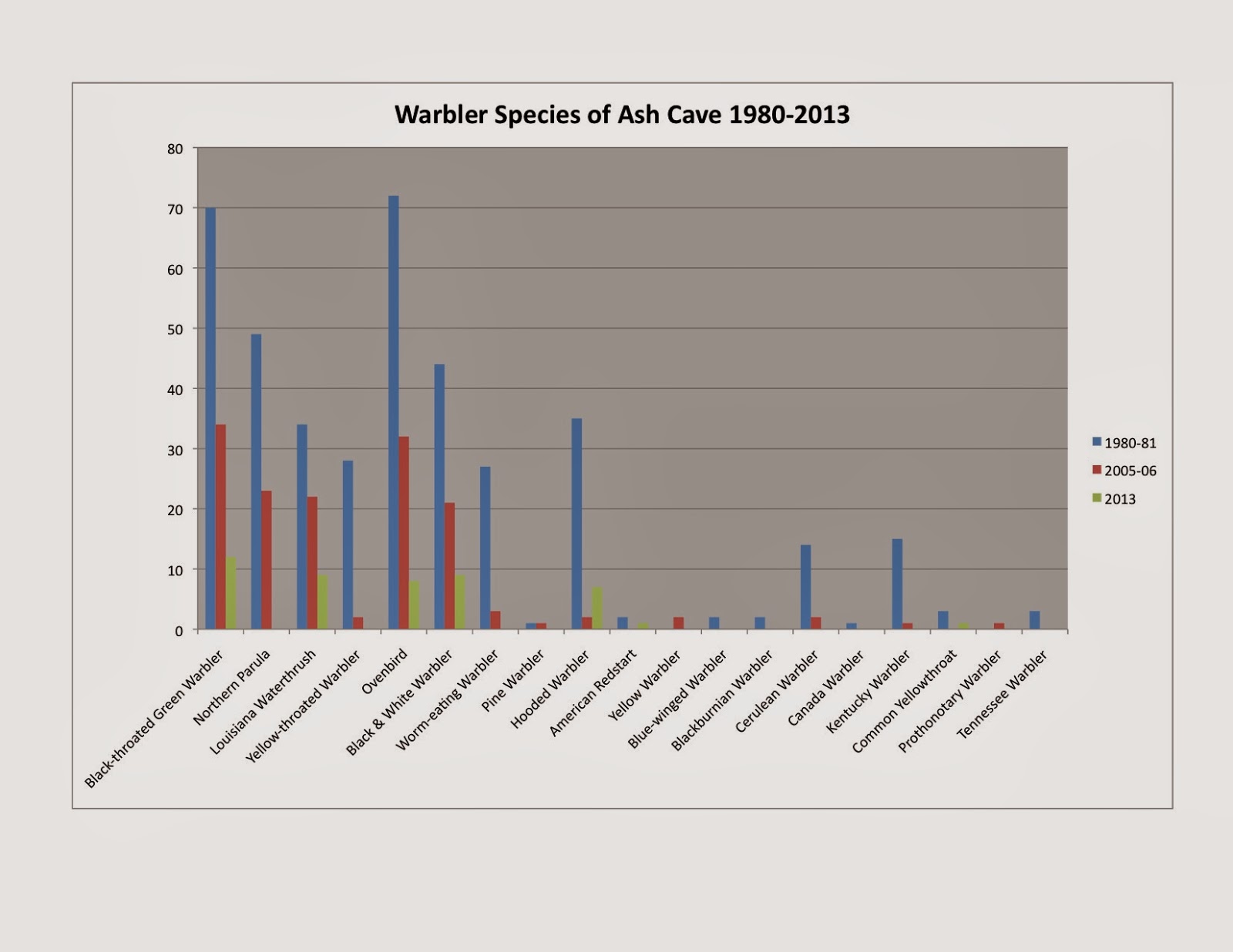 It's COLD, but the birds are here (updated)

Try doing Ornithology classes in sub zero temperatures. Students hate it, but this week has been good. This is only the second time we've included the winter season as part of the class. Last year it was Evening Grosbeaks and Red-breasted Nuthatches. This week we have Purple Finches and Tree Sparrows. I wouldn't say these birds are really rare for down here, but they are uncommon, and worth taking note. 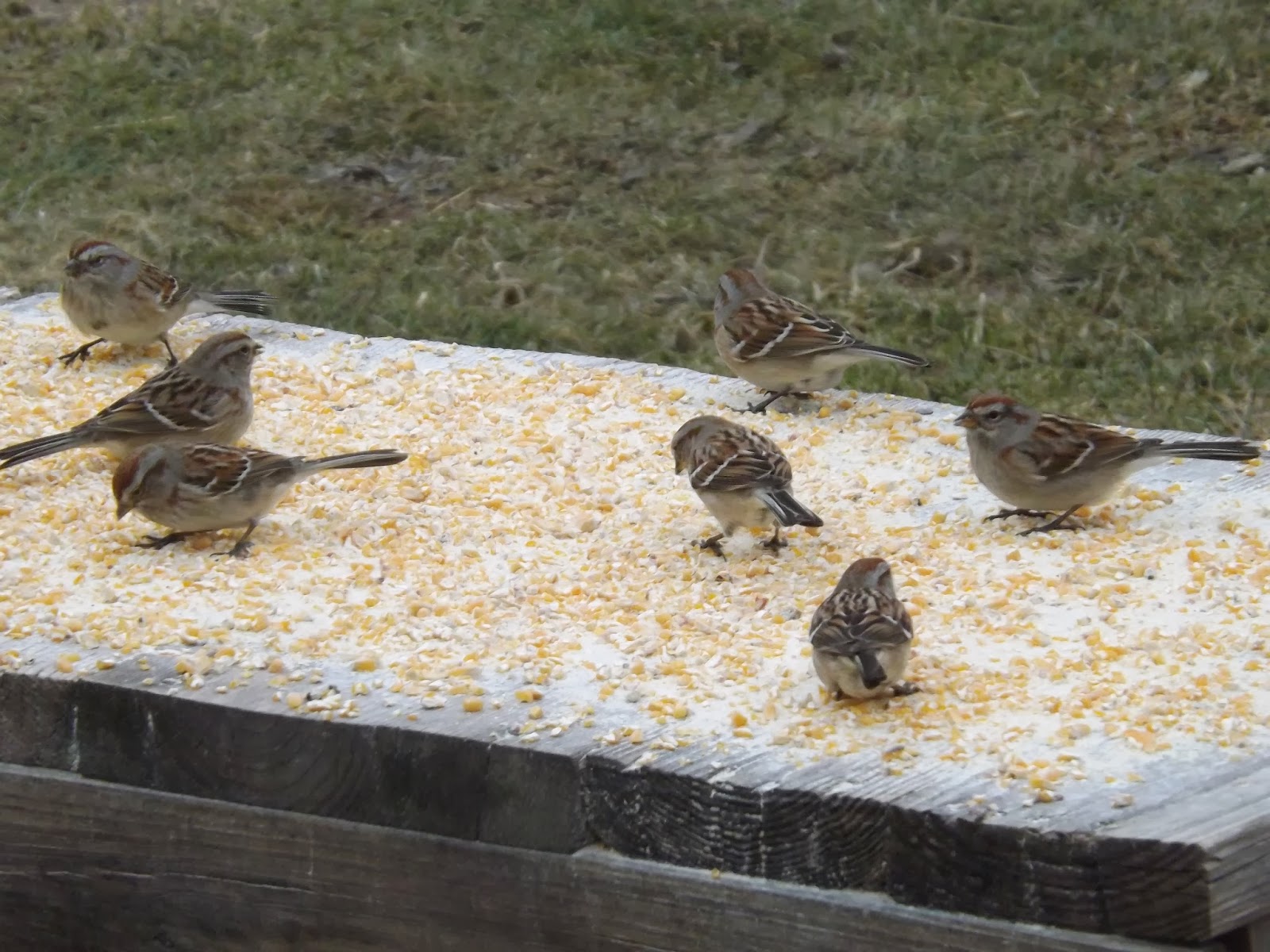 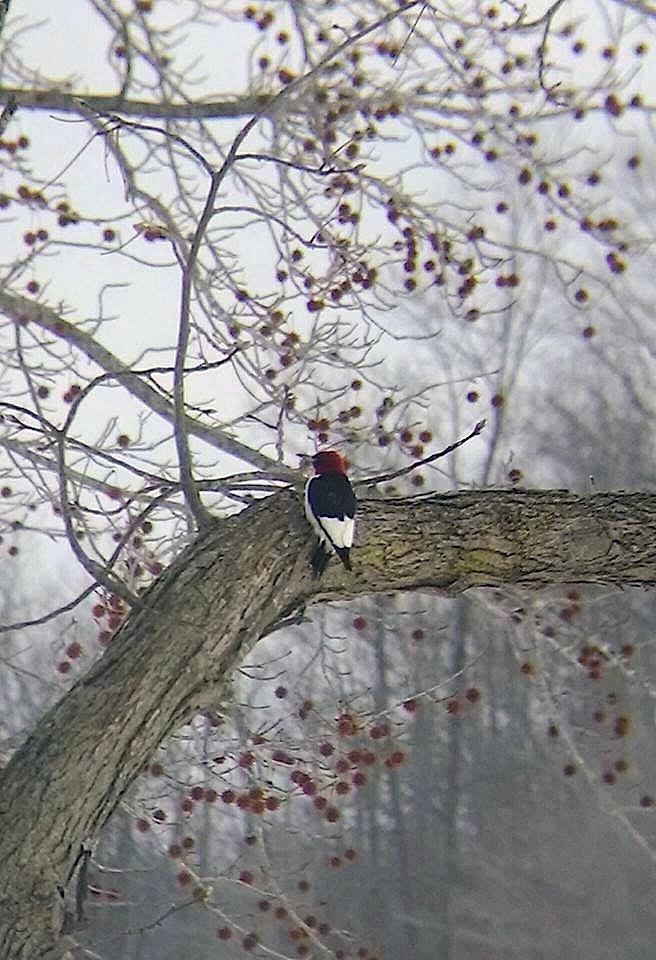 Lake Snowden has been bitter cold this past week. One new bird, a Red-headed Woodpecker certainly made it worth the visit. We get all the other woodpeckers on a regular basis down here, but this one takes a special trip to find. Thanks to Tiffany Kieffer for the above photos. She took the woodpecker with a cell phone up against the back of her binoculars. 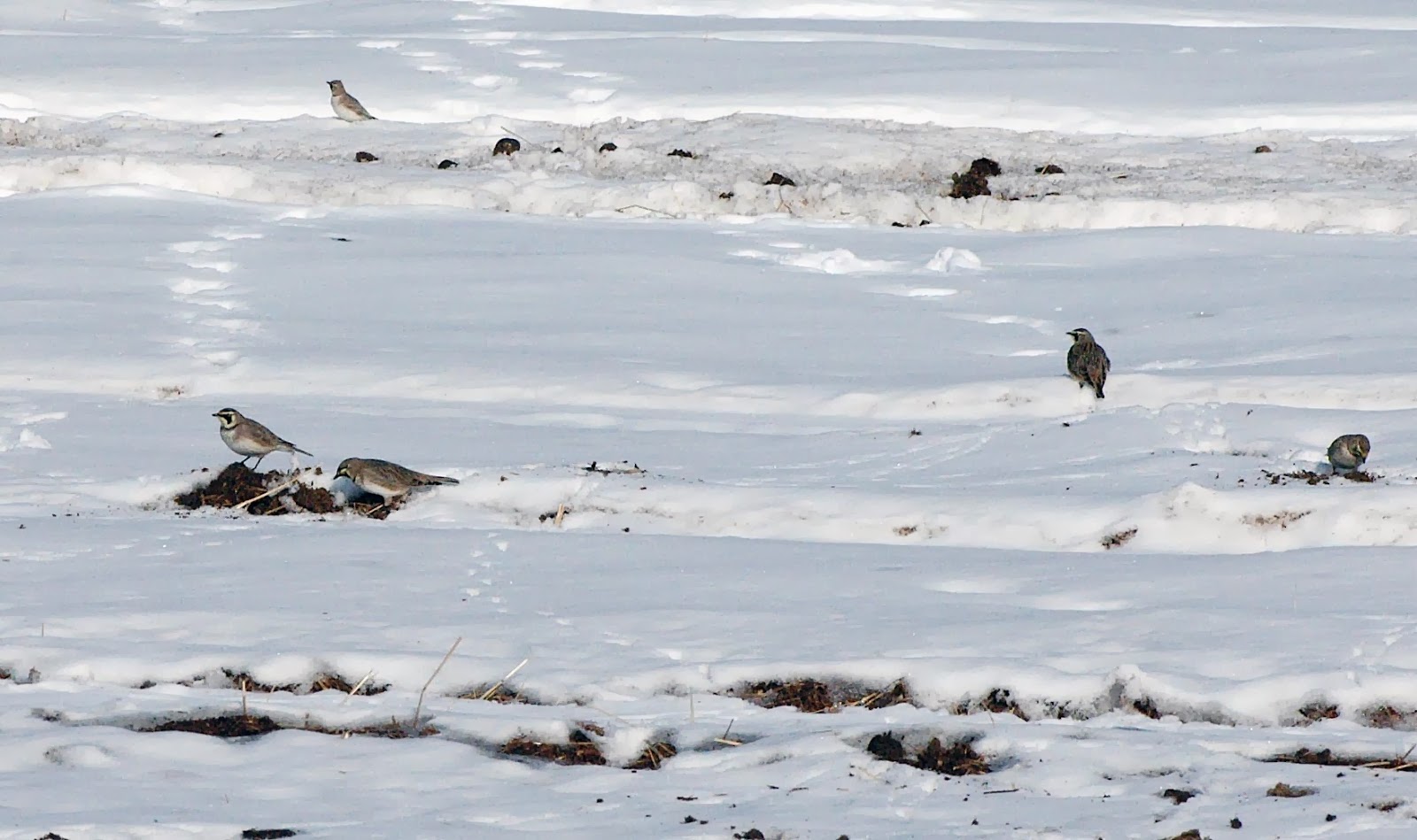 Thanks to Bob Placier, Lynn Holtzman, and Ron Cass for spreading the word around campus about the following species they found out front this afternoon. This is a group of Horned Larks. 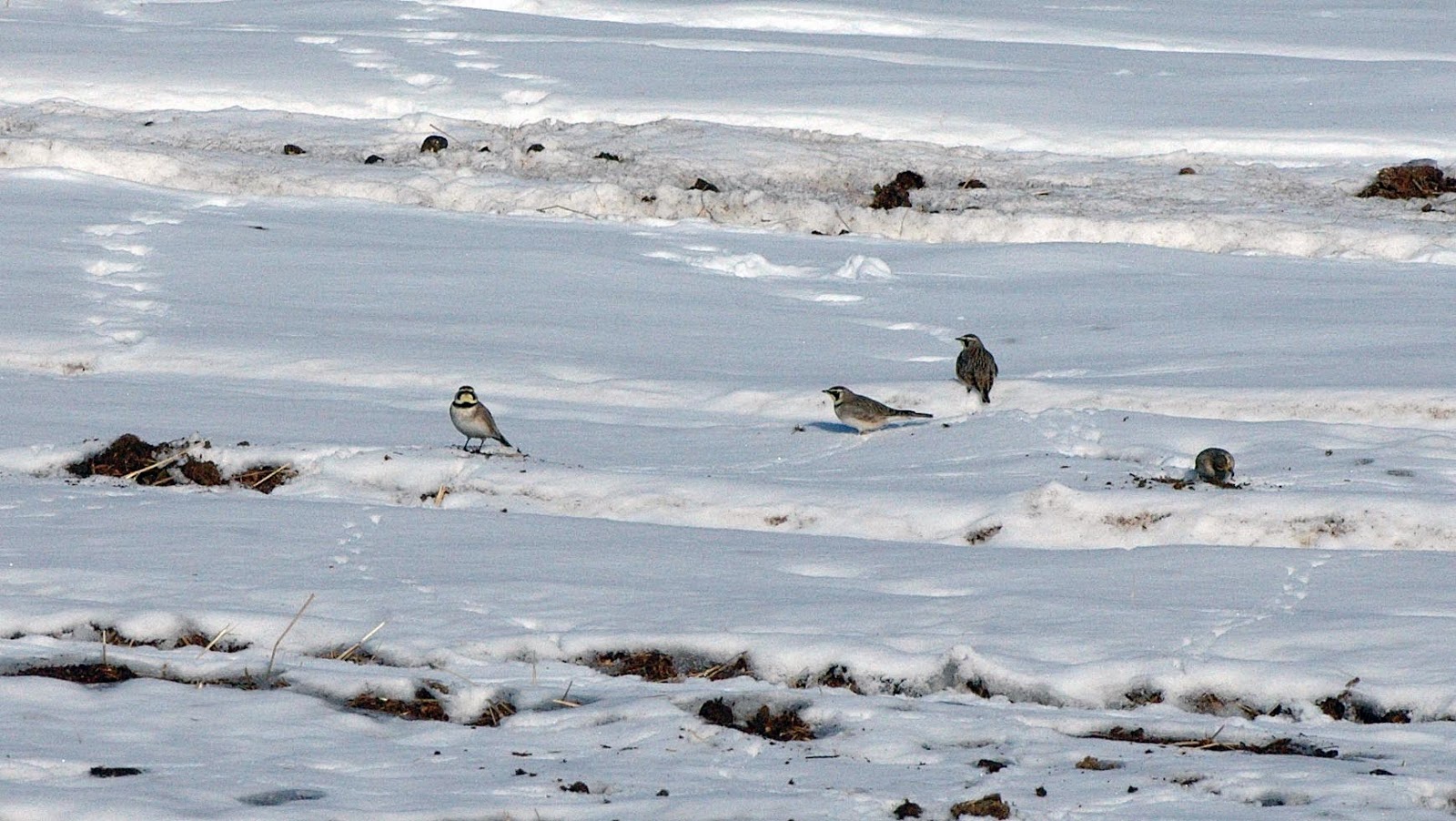 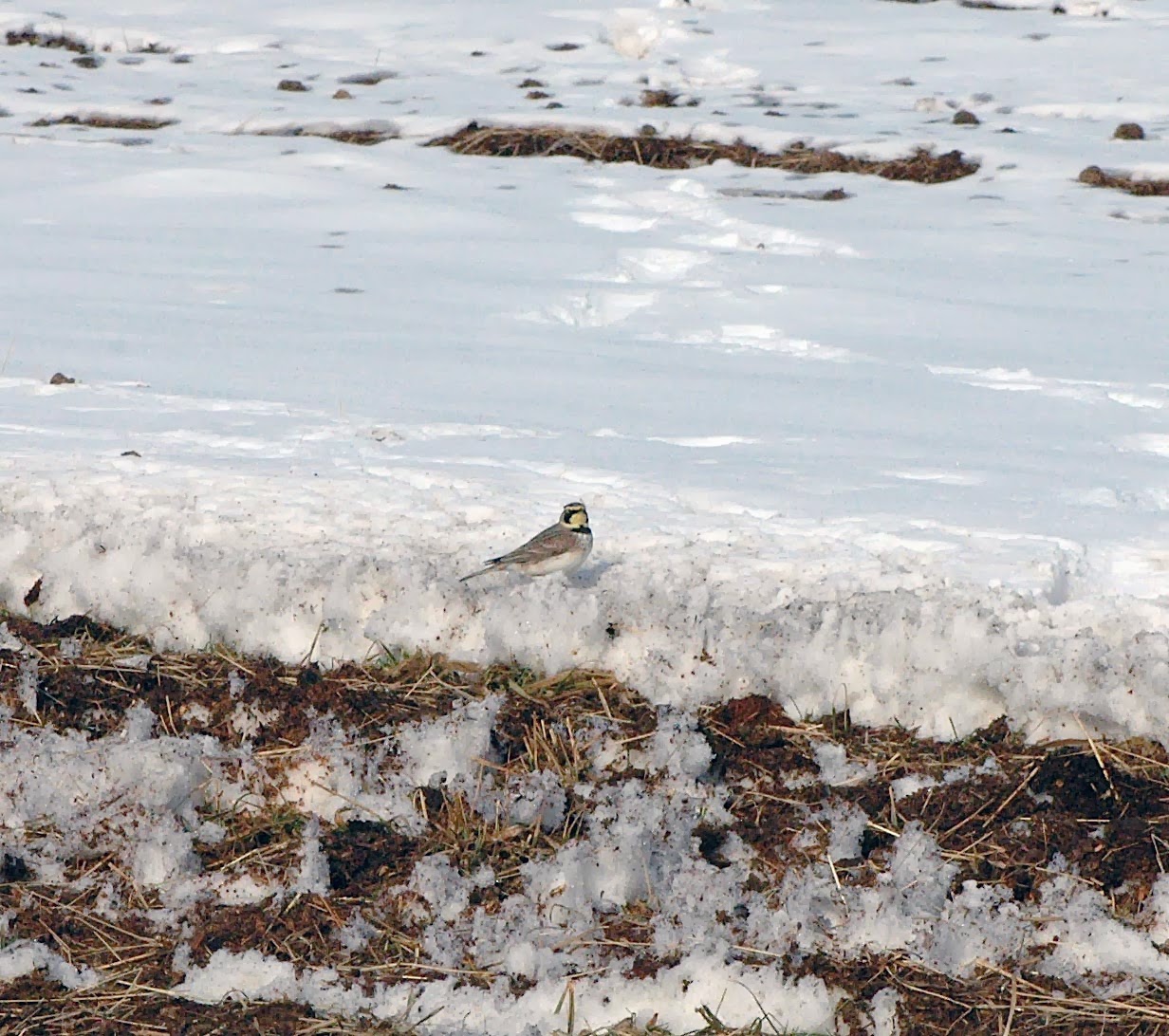 Horned Larks are recognized by the yellow chin, a black medallion or "bling" around the neck, and a thick Sam Elliot/Vigo Mortensen mustache. You can always click on the photos for a better look. 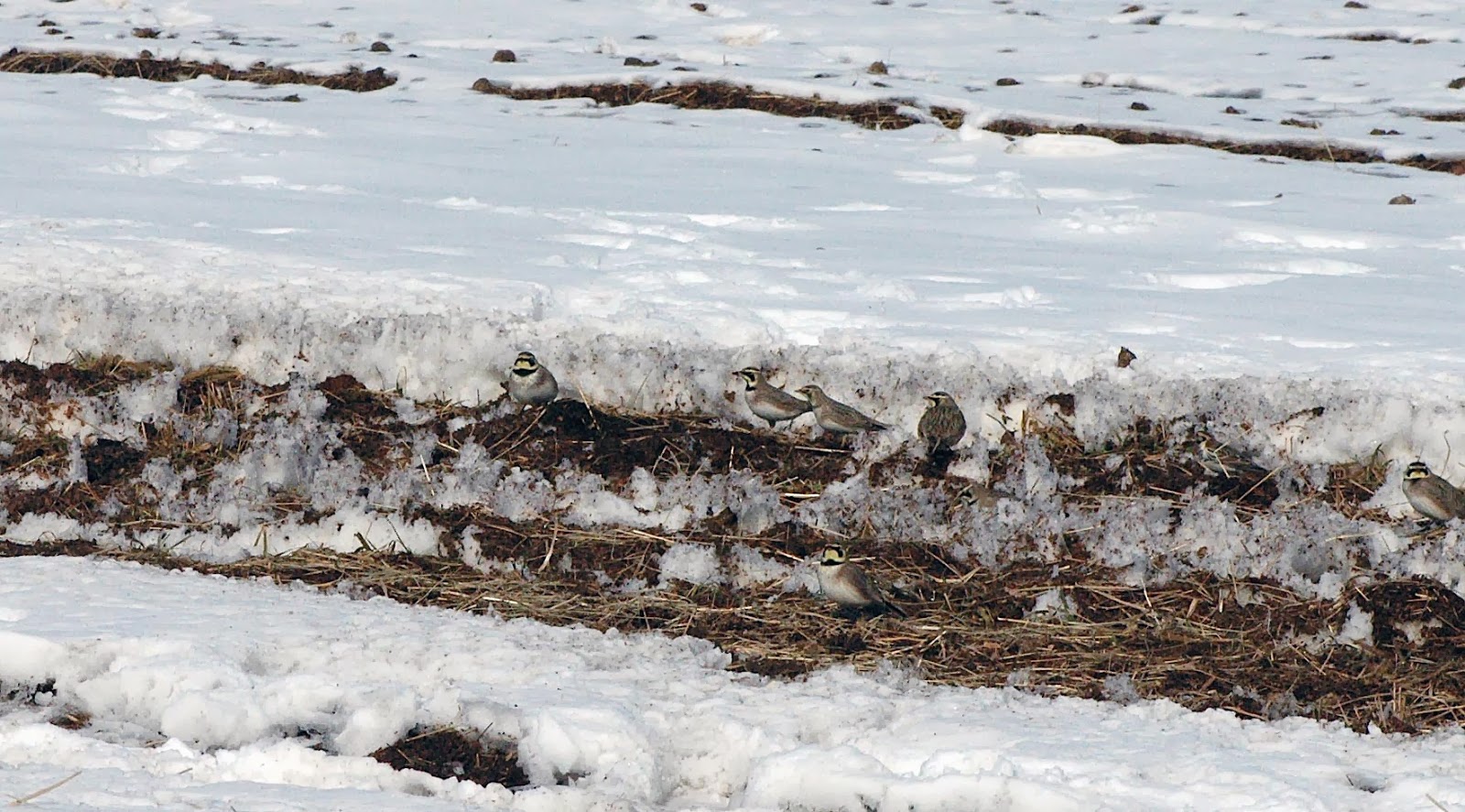 Jim McCormac did a great post on these guys earlier this week at ohio birds and biodiversity. Not only are his pictures better, he had thousands of birds. We have less than 100. So by no means am I trying to copy Jim's post in any way, I merely want people of Athens County to know, these birds are down here too!!

Jim found cracked corn to be an attractant to the birds he observed. Here we use something different. Though unintentional, freshly spread horse manure brought the birds in. 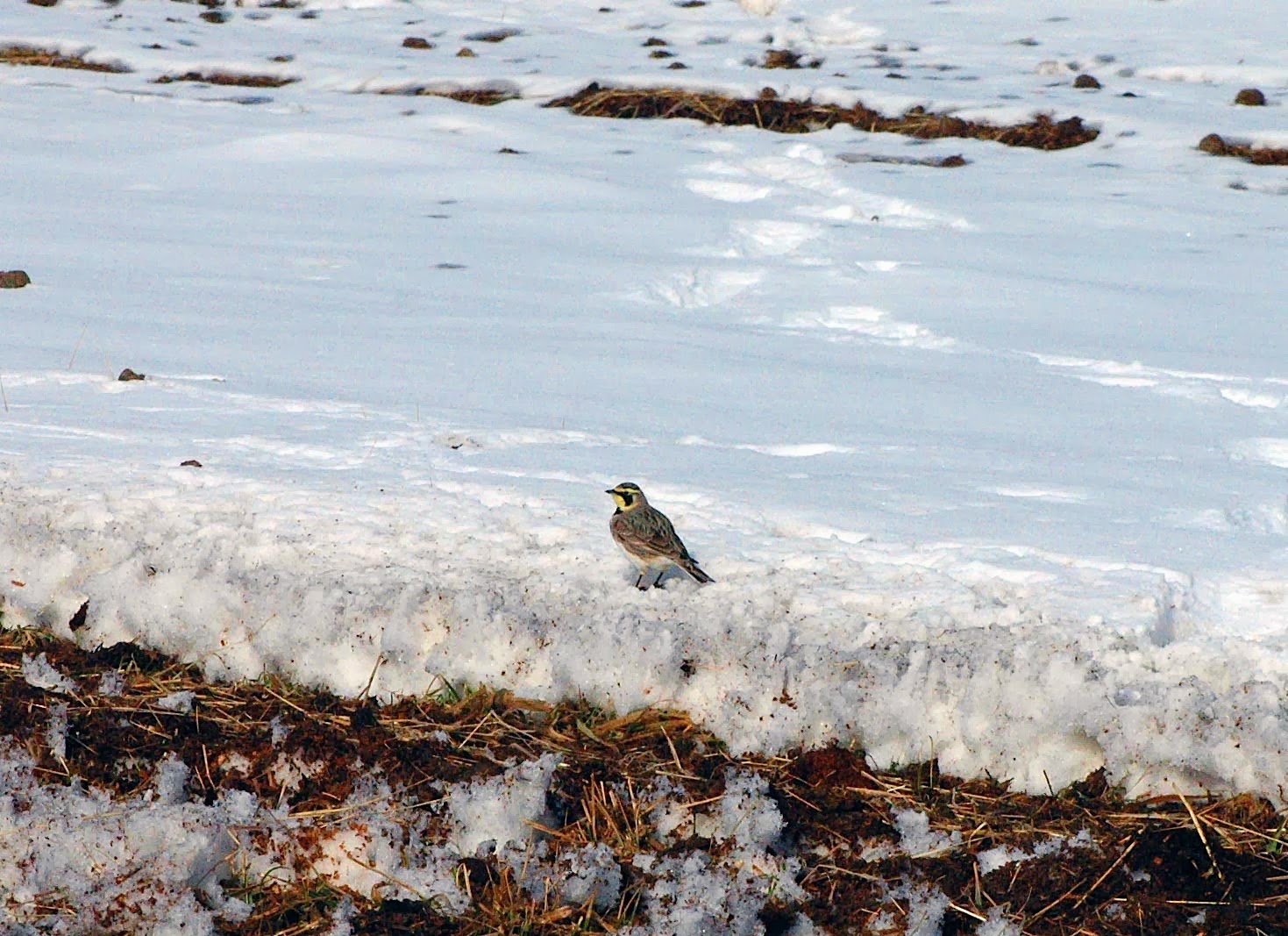 Without a telephoto lens, I had to, (as usual) sneak up on the birds. While most searched for seeds in the manure, a few remained up on the snow and ice standing guard. Whenever I got too close, they would peep and all fly away. 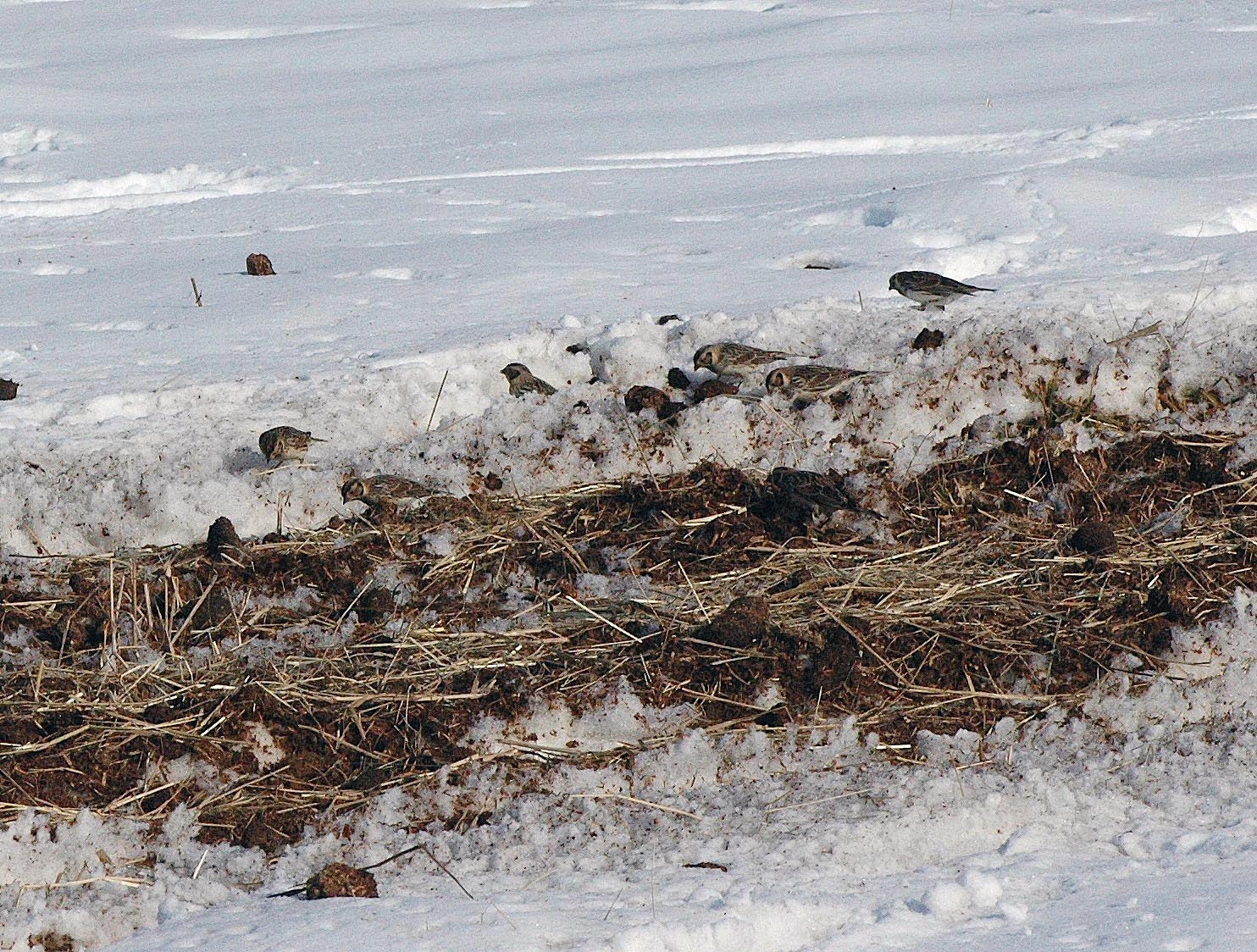 The main reason I grabbed the camera was to find this brown bird. It's a Lapland Longspur, and it's also the first time I've seen one. Yeah, a lifer for me! These are in winter plumage and look sparrow like. Their facial markings are different, but I looked for the reddish brown or rufus colored bar on the wings. A few of the males were already showing that same color on the nape, or back of the neck. 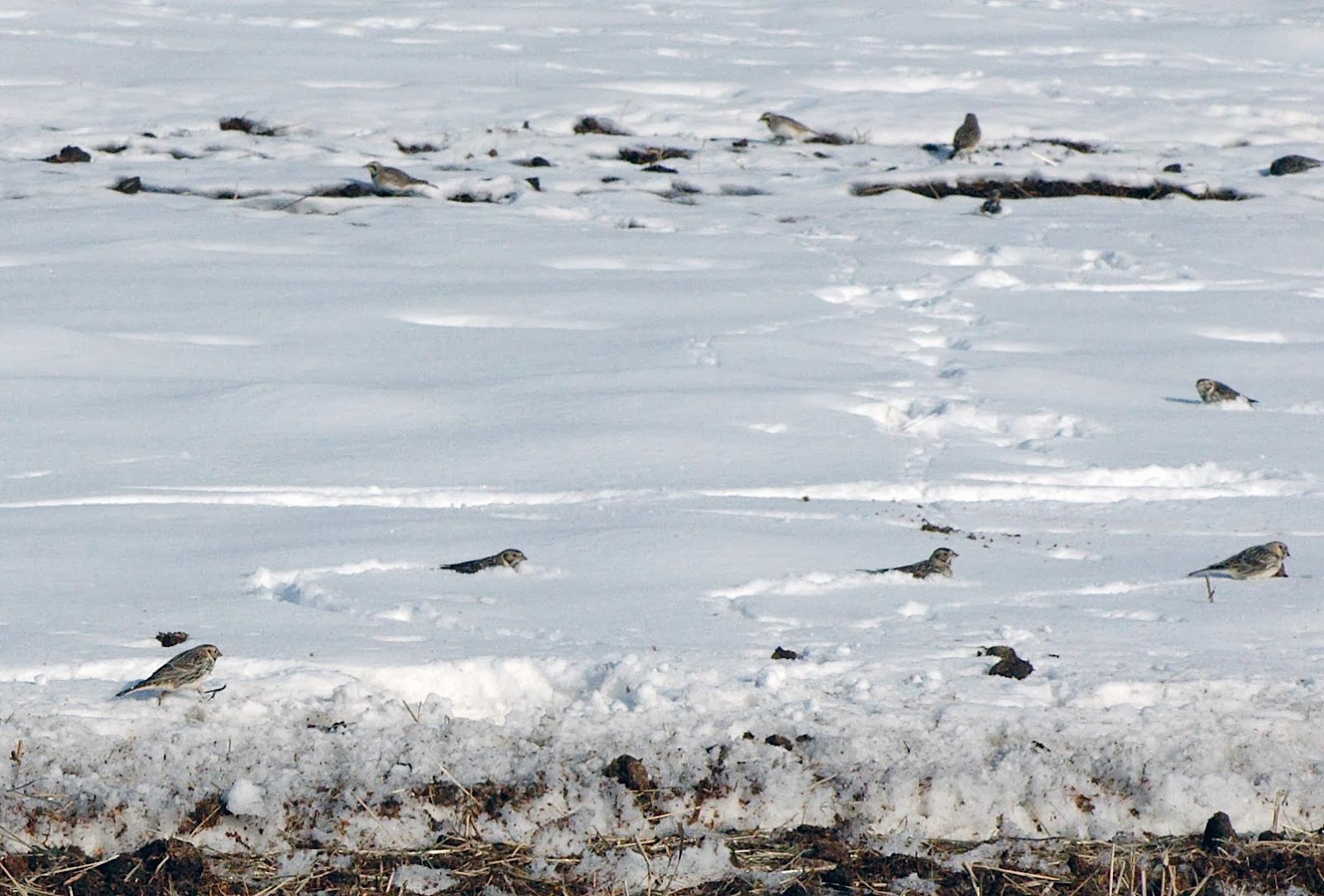 While it's always great to mark another new bird onto the list, I'd rather watch their behavior. It was entertaining to see how several at a time would waddle through the snow like ducklings, form a semi-circular pattern, and then hunker down in the snow.

Can you pick out the third species from this group? Look on the right. About 50% of the birds today were made up of Snow Buntings. While they would feed with the other two species, after taking flight, they would roost in trees separate from the others. I couldn't get any on the ground, as they were even more wary of my approach. Their bright white undersides, and white wing patches make them easily distinguishable. They contain a lot of buff color on them now, but will turn a brilliant black and white come breeding season. All three of these species will breed far north of Ohio. 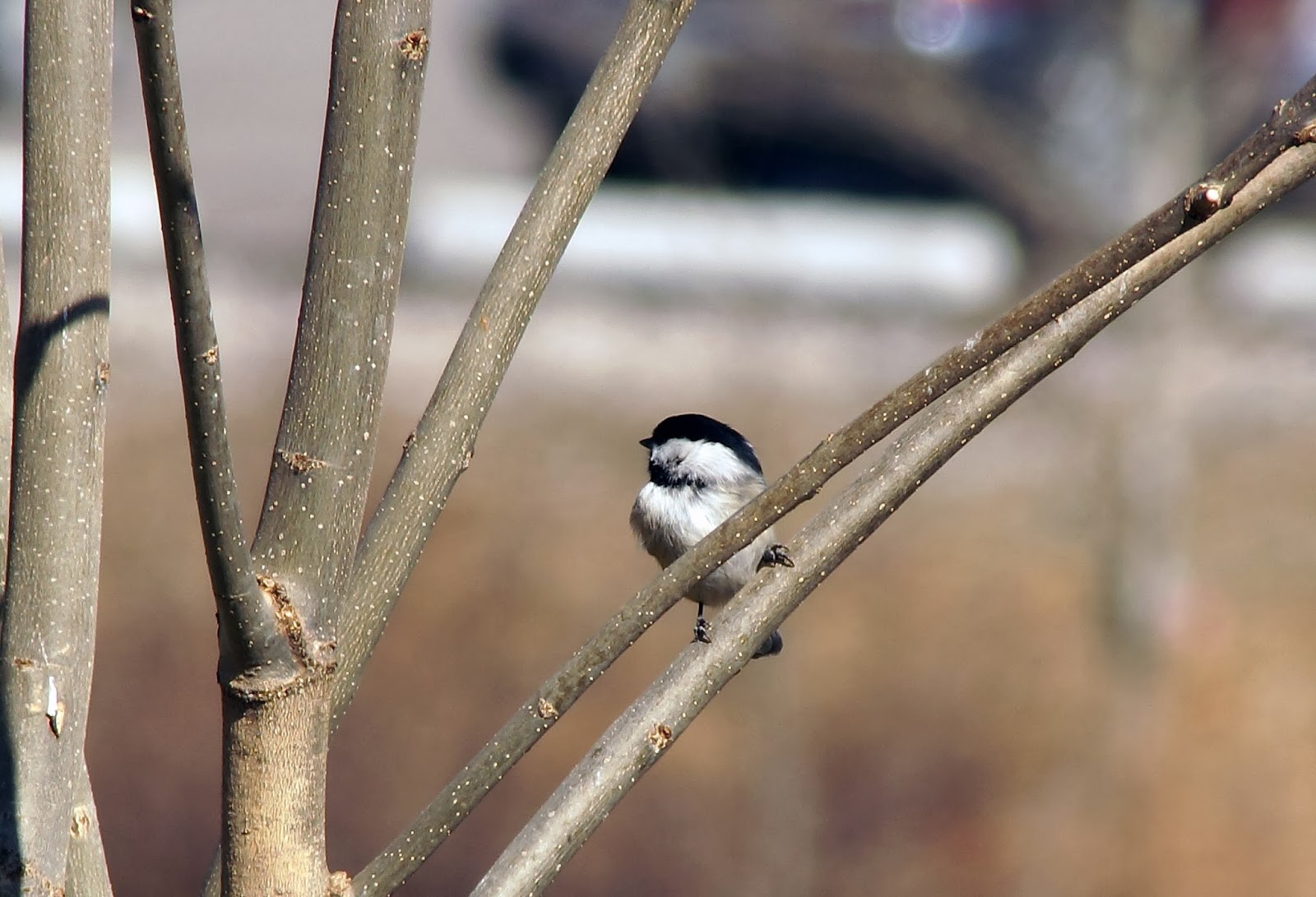 Carolina Chickadee. I had a student lend me his 200-400mm zoom lens today. I won't say who, as I don't want everyone bugging him about his camera. I have used 400 telephotos before, but never a zoom lens. Took awhile to get used to. It was frigid cold, very windy, and I didn't use a tripod. These were mostly at 200.  By the time I figured out how to use it at 400, I was frozen. Want some more excuses? 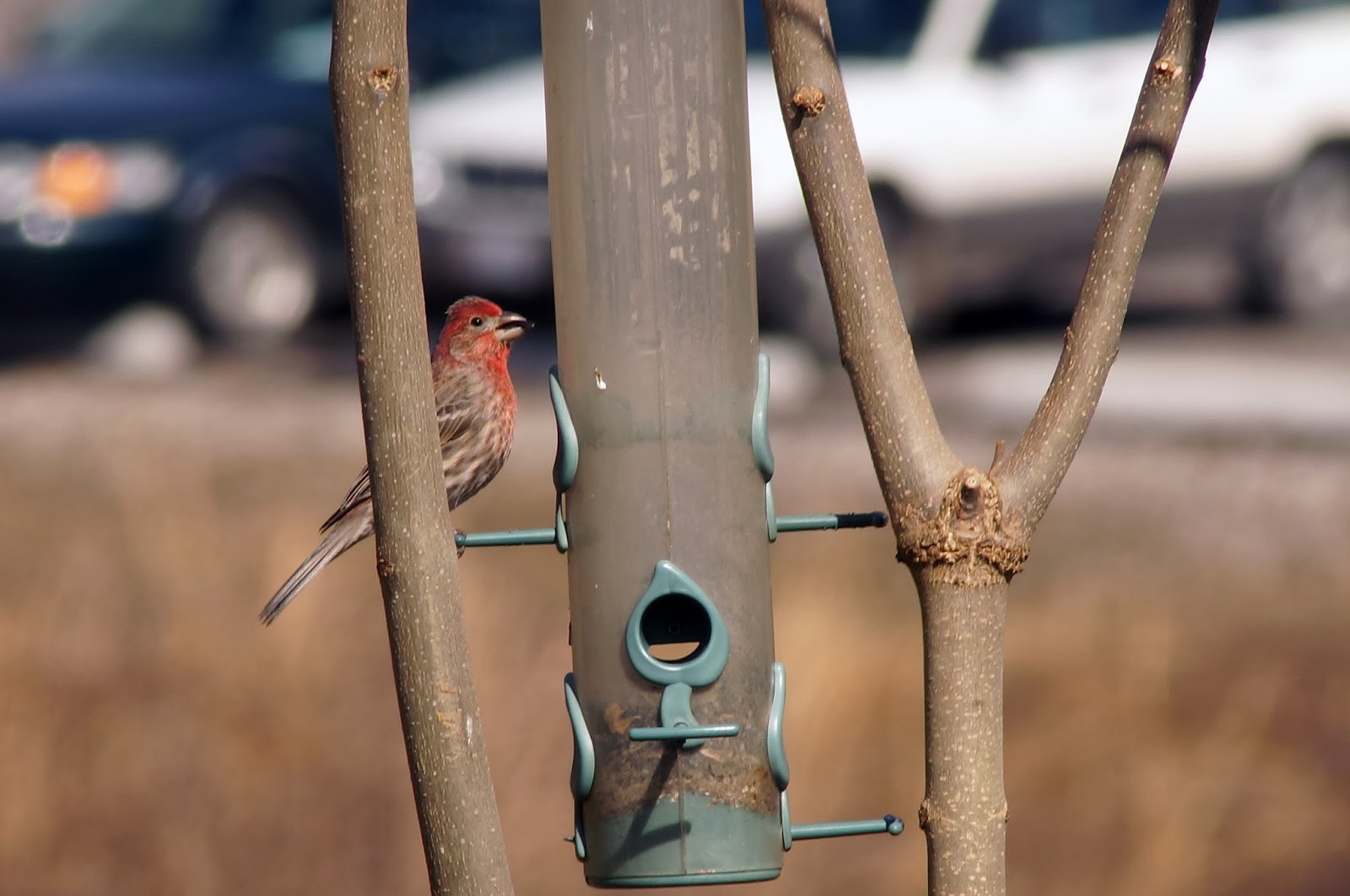 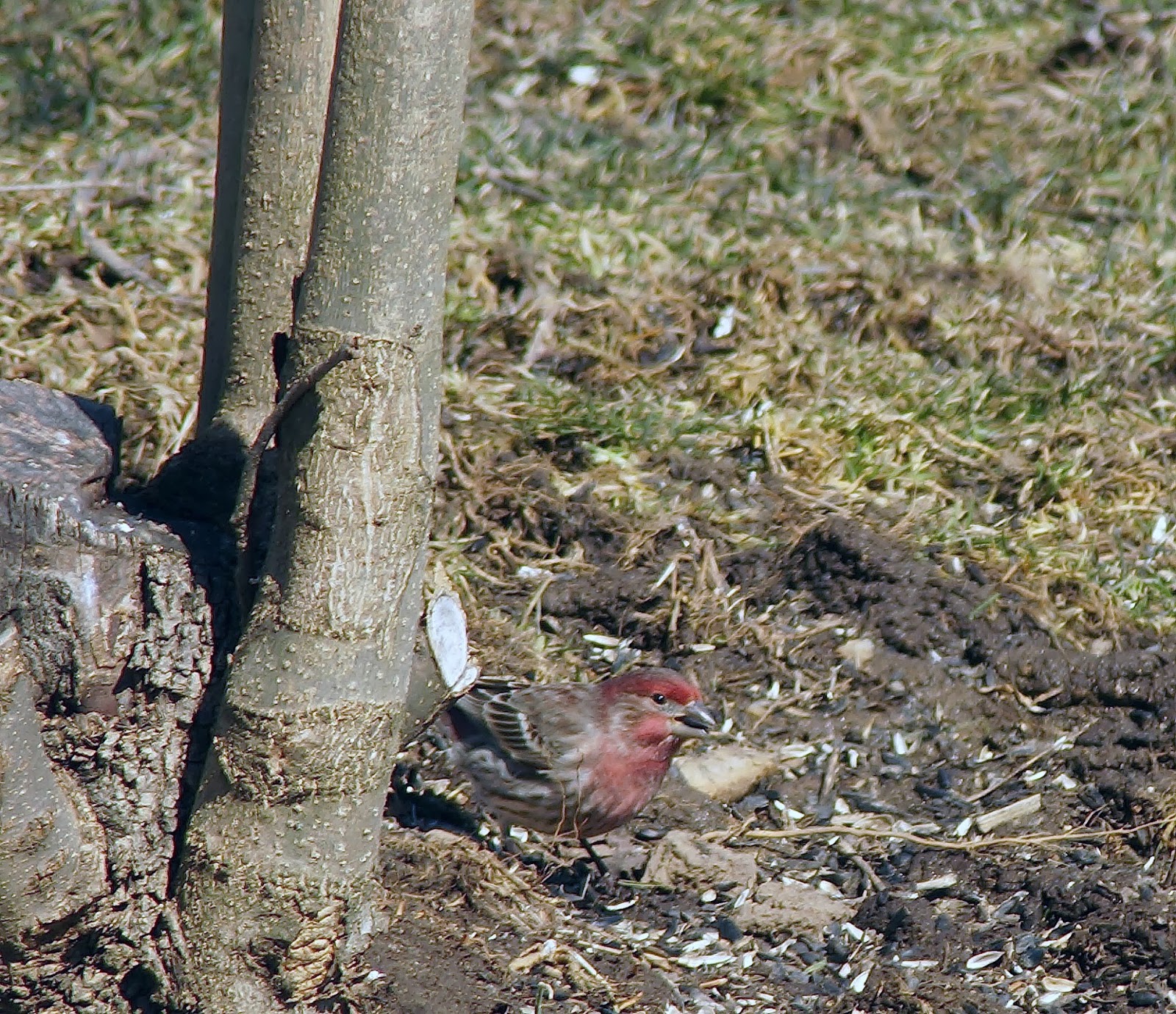 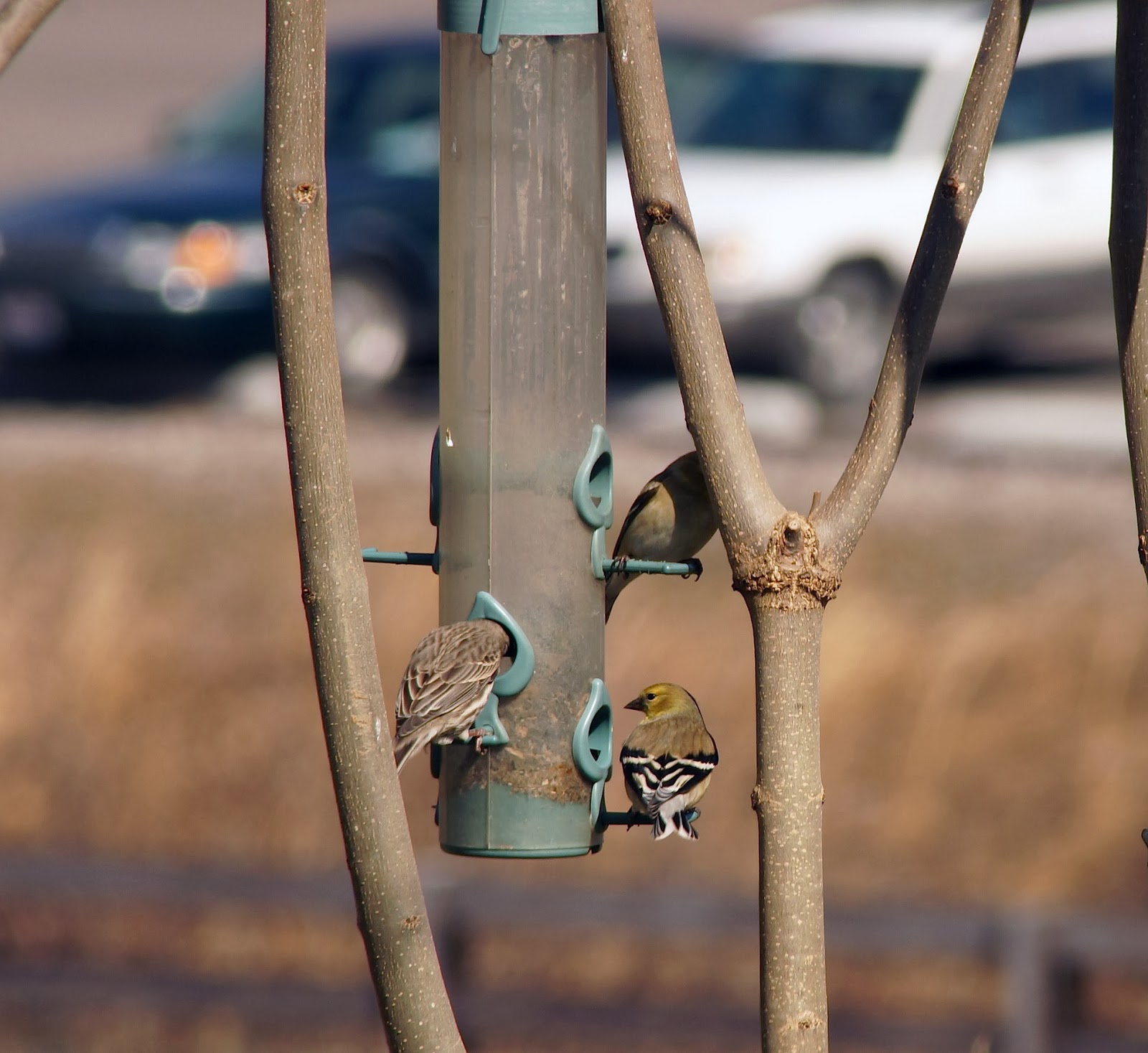 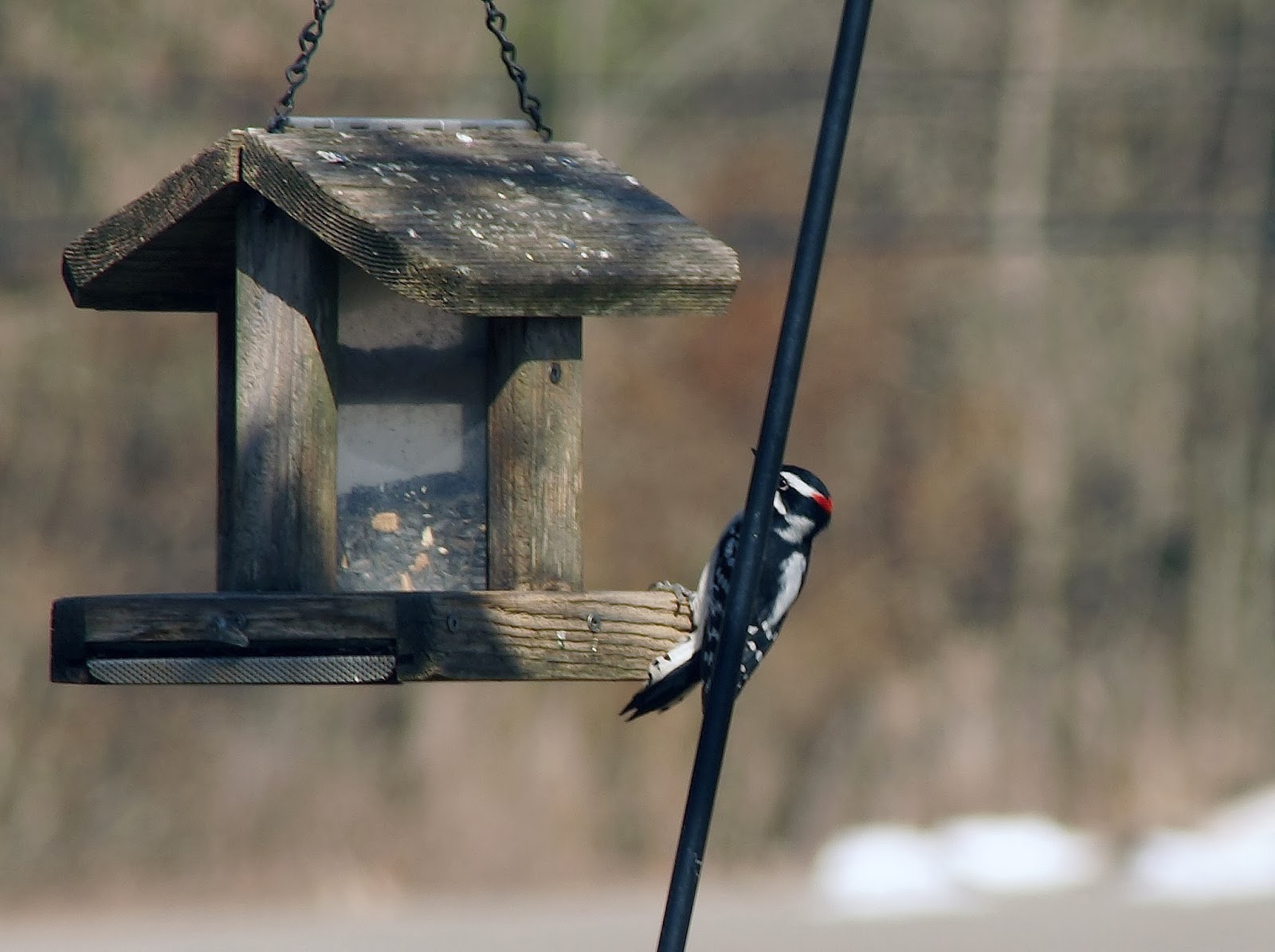 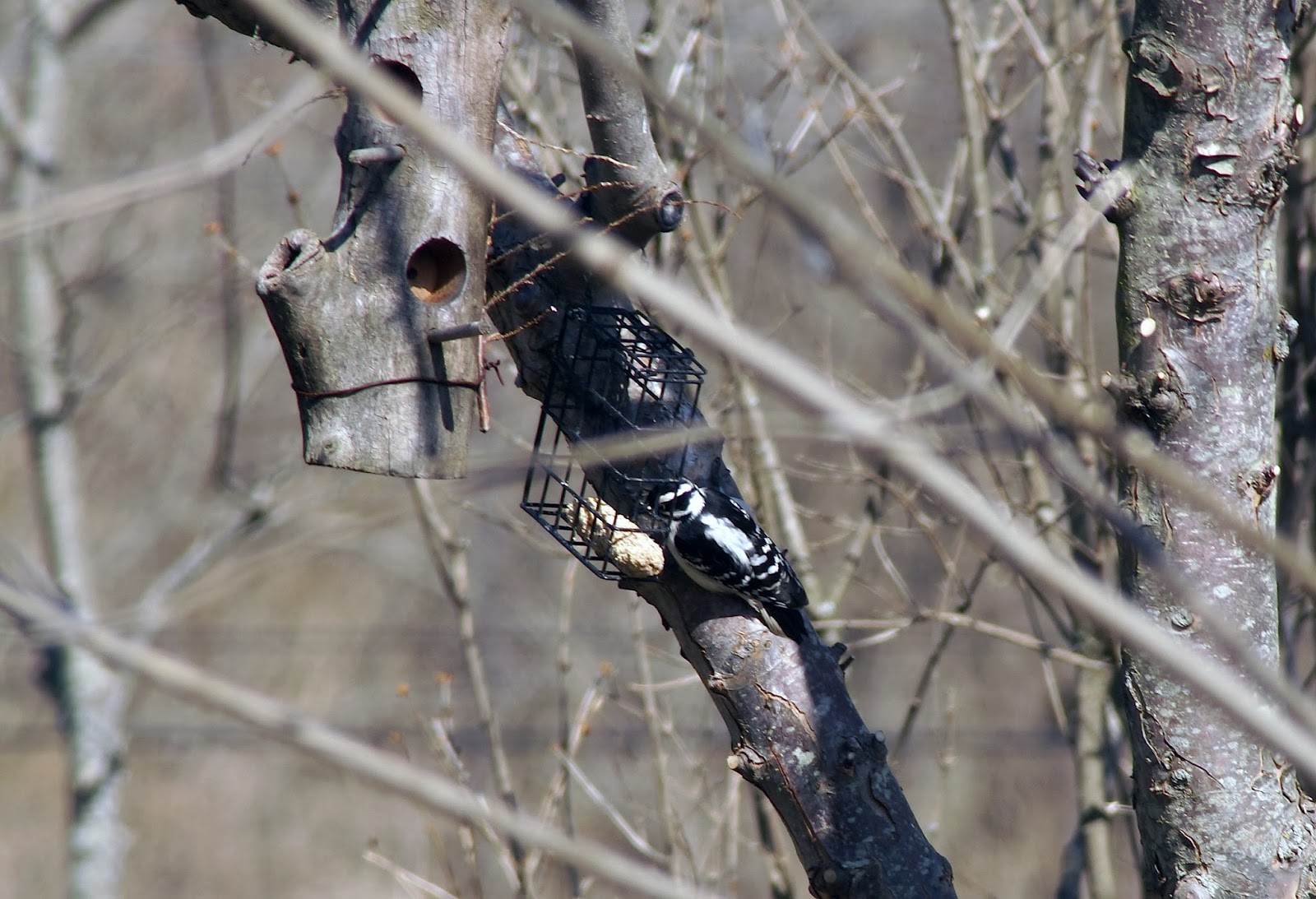 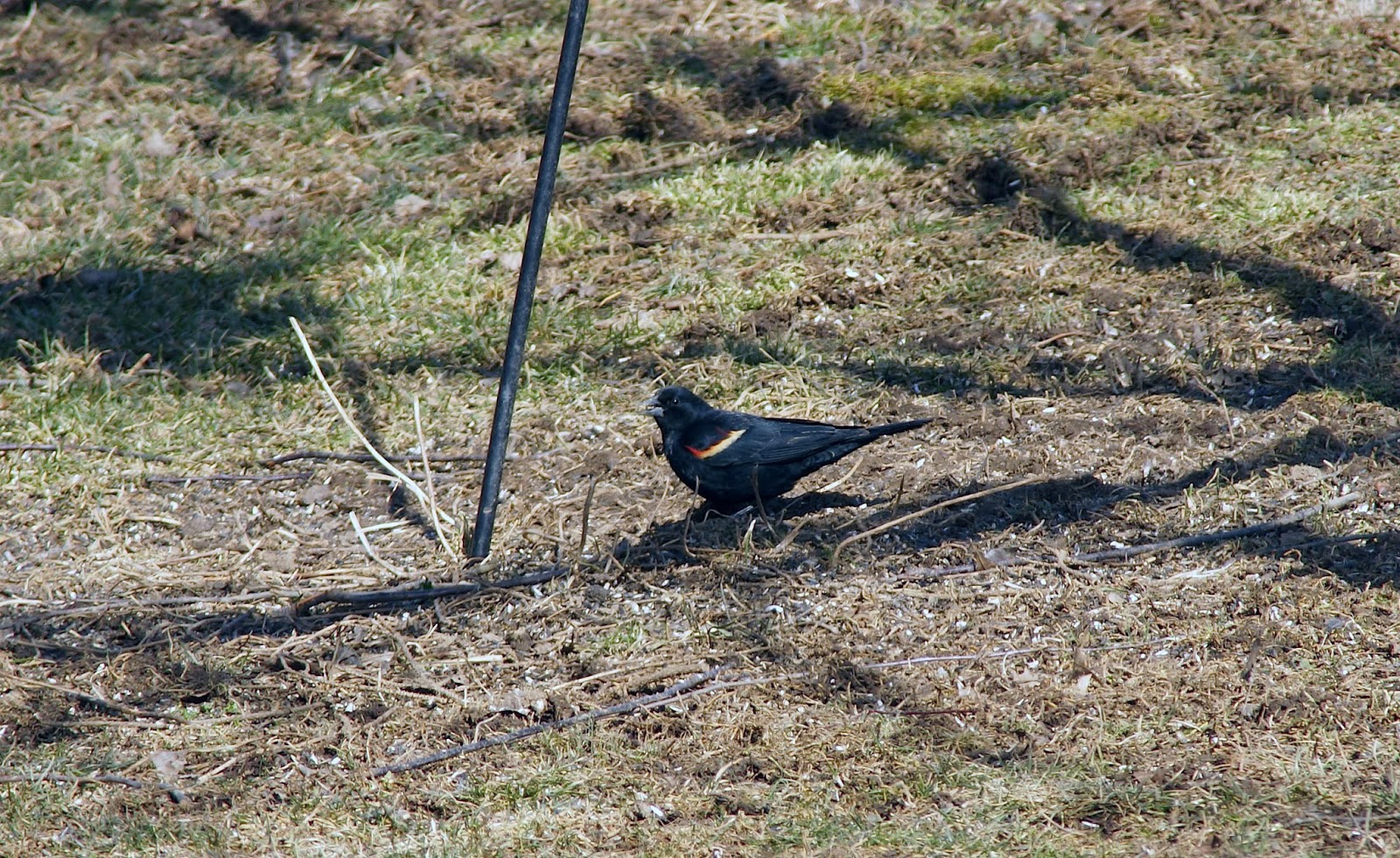 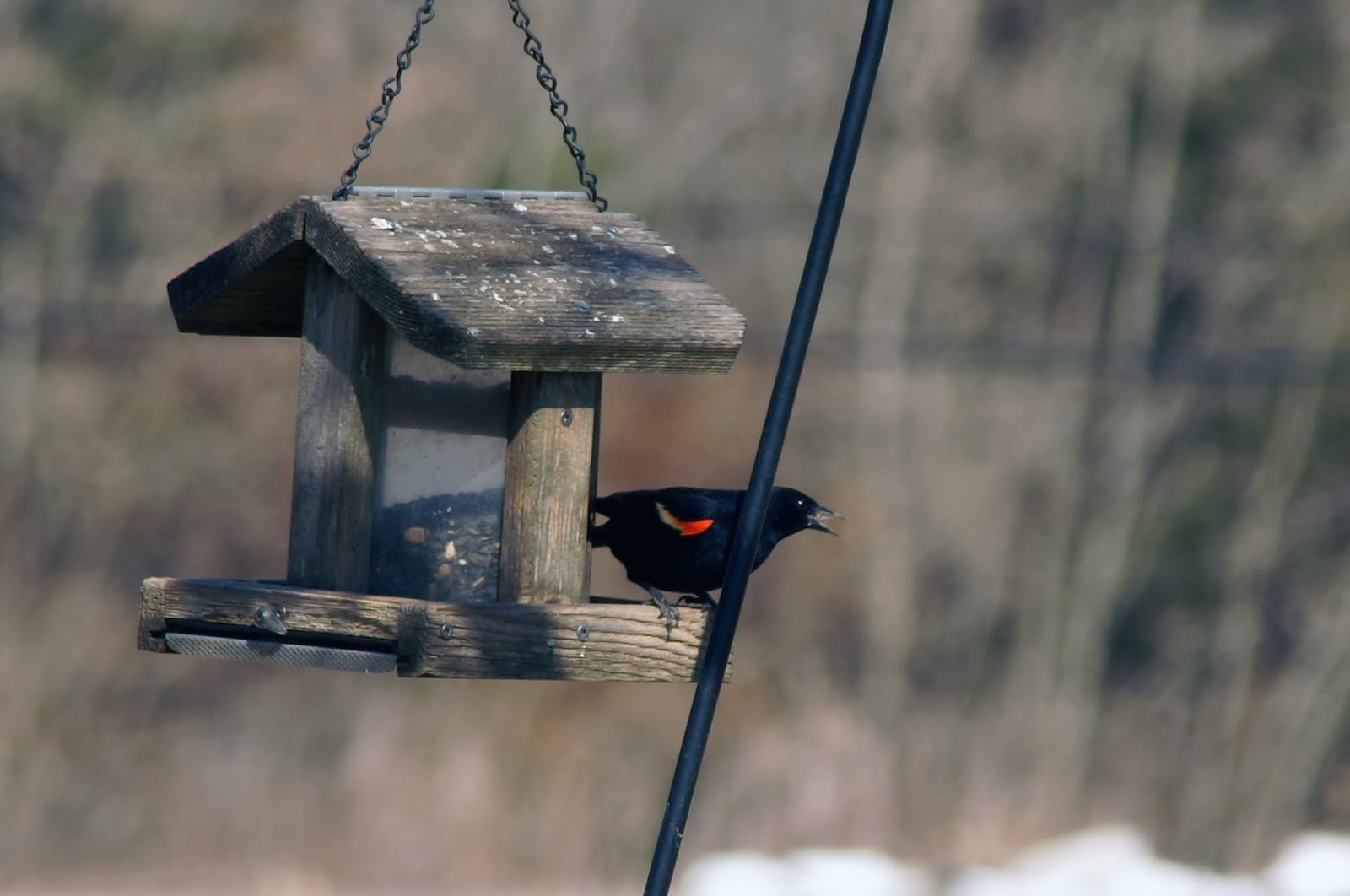 Red-winged Blackbird. Yep they are back, at least the males. Expect the females to arrive in a couple weeks.
Posted by DenPro at 6:21 PM No comments: