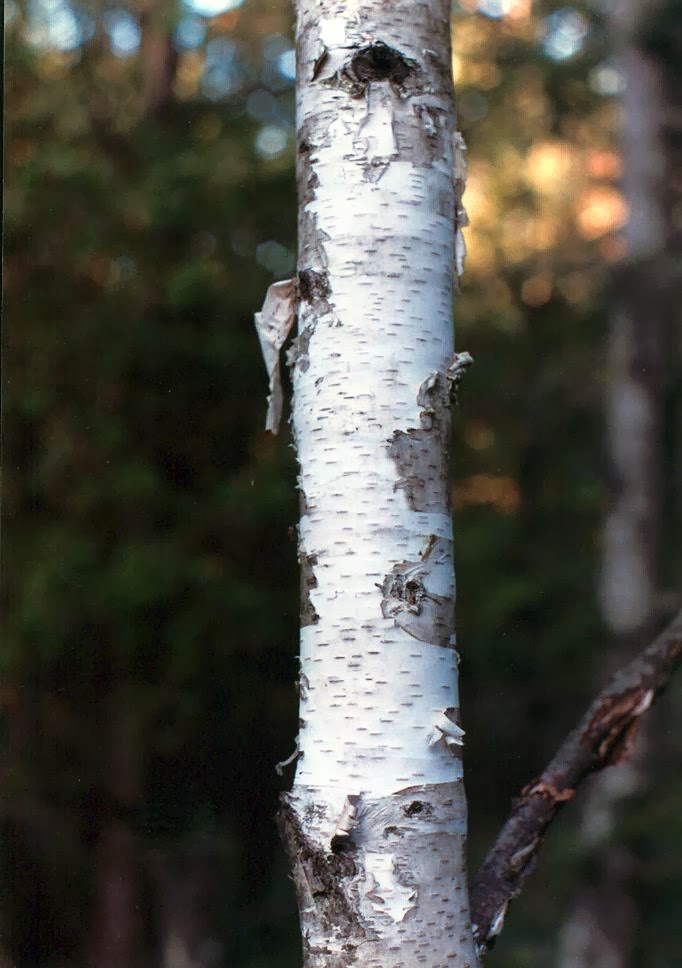 When one thinks of Birches, or the Birch family Betulaceae, this is what usually comes to mind. Trees with white peeling bark. The family is more complex than that, and contains five different groups of plants or genera in our area. Most members have double serrate margins on the leaves. All produce catkins, but unlike their near relatives the Willows and Poplars, both male and female parts are on the same tree. 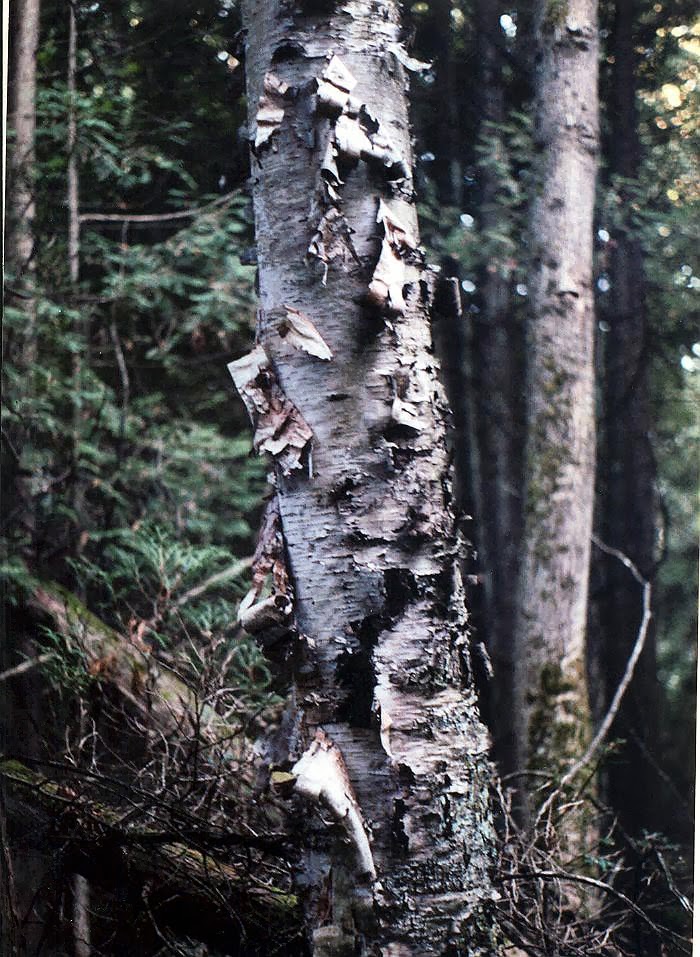 We might as well start with the genus the family is named after. Betula papyrifera, commonly known as White Birch. This is a species of the Northern Hardwood region. It's associated with Eastern Hemlock, White Cedar, White Pine, and Yellow Birch. White Birch is rare in Ohio, found only in a couple counties around Lake Erie. Birch bark is waterproof, and can be used to write on in place of paper. Sections were often cut and glued with balsam onto canoes. The other common names for this species is Canoe or Paper Birch. 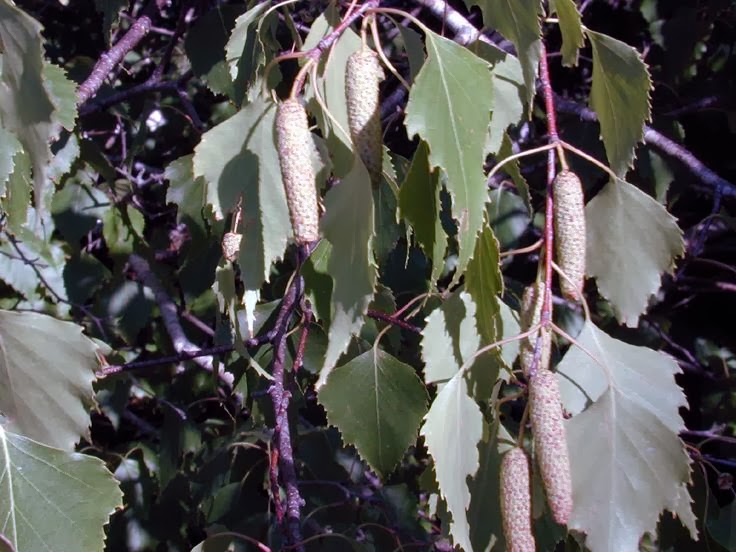 All birches produce tightly packed fruit shaped like this. In time they will break apart into tiny winged nutlets. This species with the very elongated leaf tips is Gray Birch, Betula populifolia. Gray Birch can be found in several N.E. counties of Ohio.


Black Birch, Betula lenta, is also uncommon in Ohio, being scattered throughout the eastern part of the state. The leaves are narrowly egg shaped, and the double serrations are obvious. Because these leaves look identical to yellow birch, always check the bark.


Black Birch bark does NOT peel like other birches. It is dark in appearance, and often cracks open. They resemble young Cherry trees, and another common name is Cherry Birch. 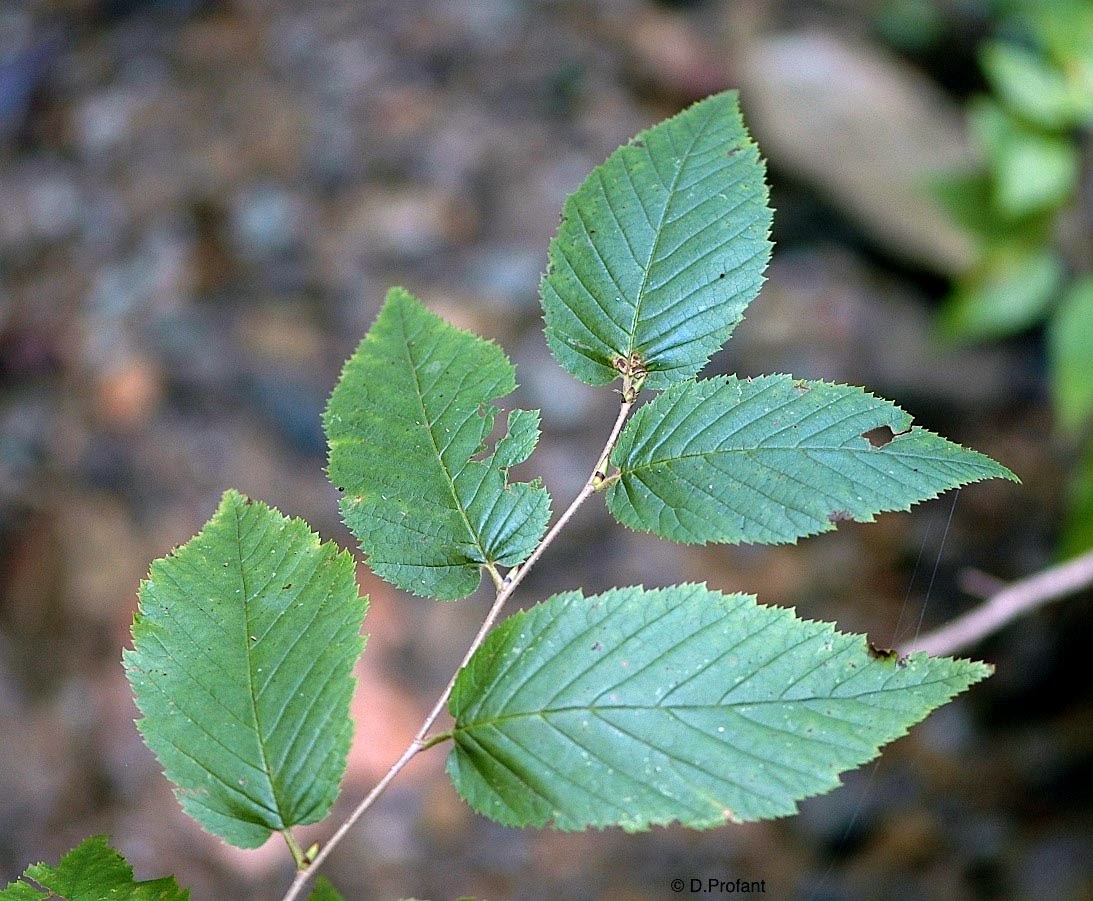 Yellow Birch, Betula alleghaniensis. The range of Yellow Birch pretty much overlaps that of Black Birch in Ohio. Since the leaves look alike with these two, once again, check the bark. 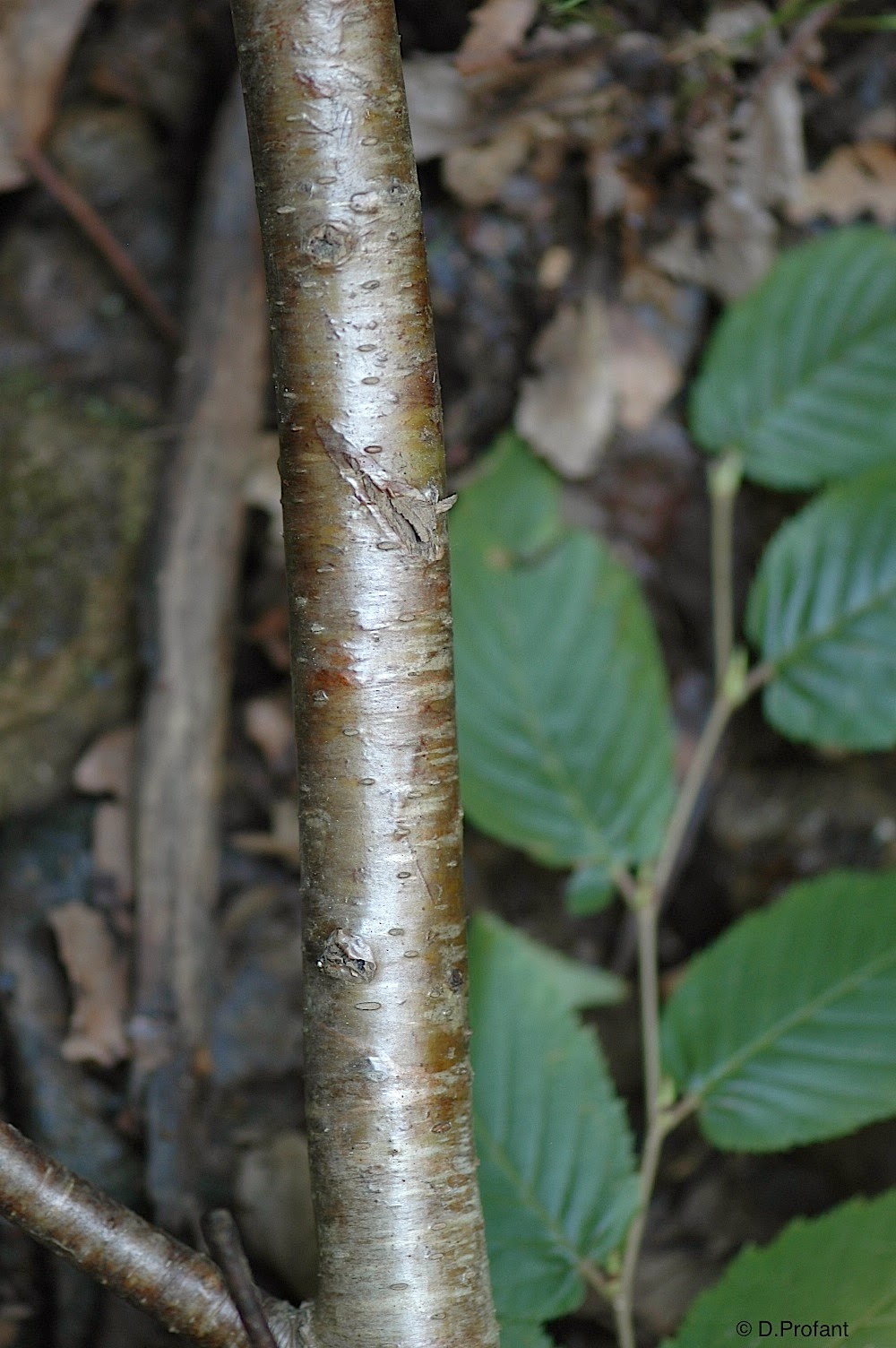 Both Yellow and Black Birch have a shiny bark when young, but Yellow Birch will show more yellowish-green. With age, Yellow Birch will peel like a duck tail, or as if a wood planer had been run over the surface. Break the twig of either of these two species during the growing season, and you will smell a sweet wintergreen odor. Birch Beer has been made from these trees.


Dwarf Birch, Betula pumila. This is a small species, growing more like a shrub than a tree. The leaves are round, and the margins have coarse teeth looking more single serrate rather than doubly serrate. Dwarf Birch is rare in the state, being restricted to fen and bog environments in a half dozen Ohio counties. 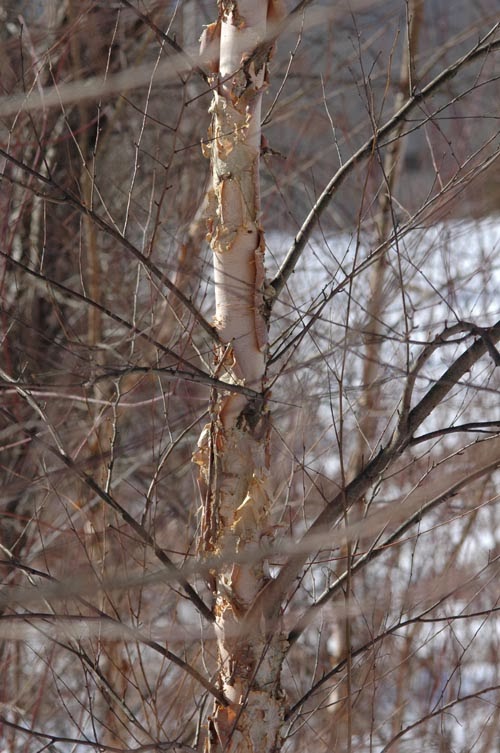 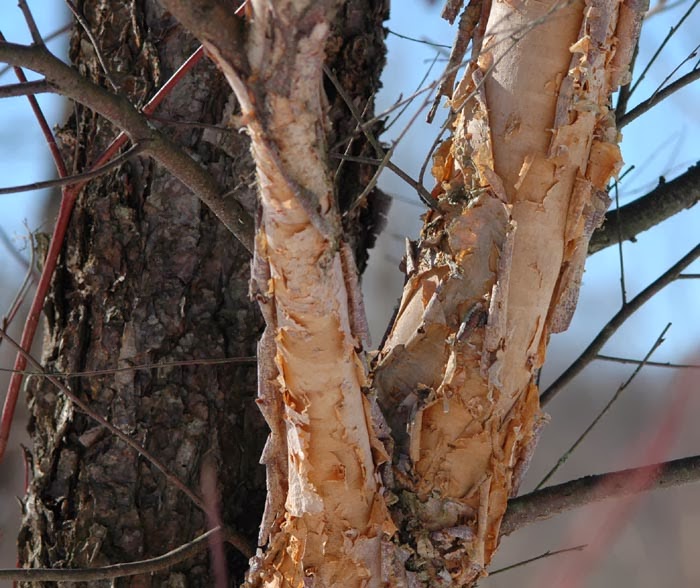 Here in southern Ohio, our most common species is River Birch, Betula nigra. Look for it it wet soils. You can see the older trees look very dark near the base, but upper portions and younger trees have an orange pink or salmon colored look as they peel.

Even trees only an inch in diameter begin to show the color and splitting of bark. River Birch leaves are like Yellow and Black, but with more distinct serrations, giving it a Christmas tree silhouette. 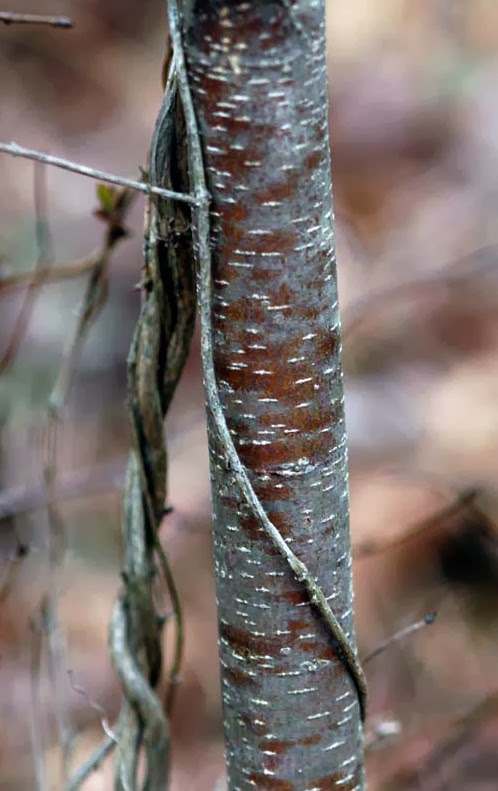 Notice the horizontal rows of white lenticles on the bark. This is typical of all the Birch family members, but this one is not a Birch. This is one of the Ironwoods. Because that name is used to describe two species, let's break them apart. This is a young Ostrya. 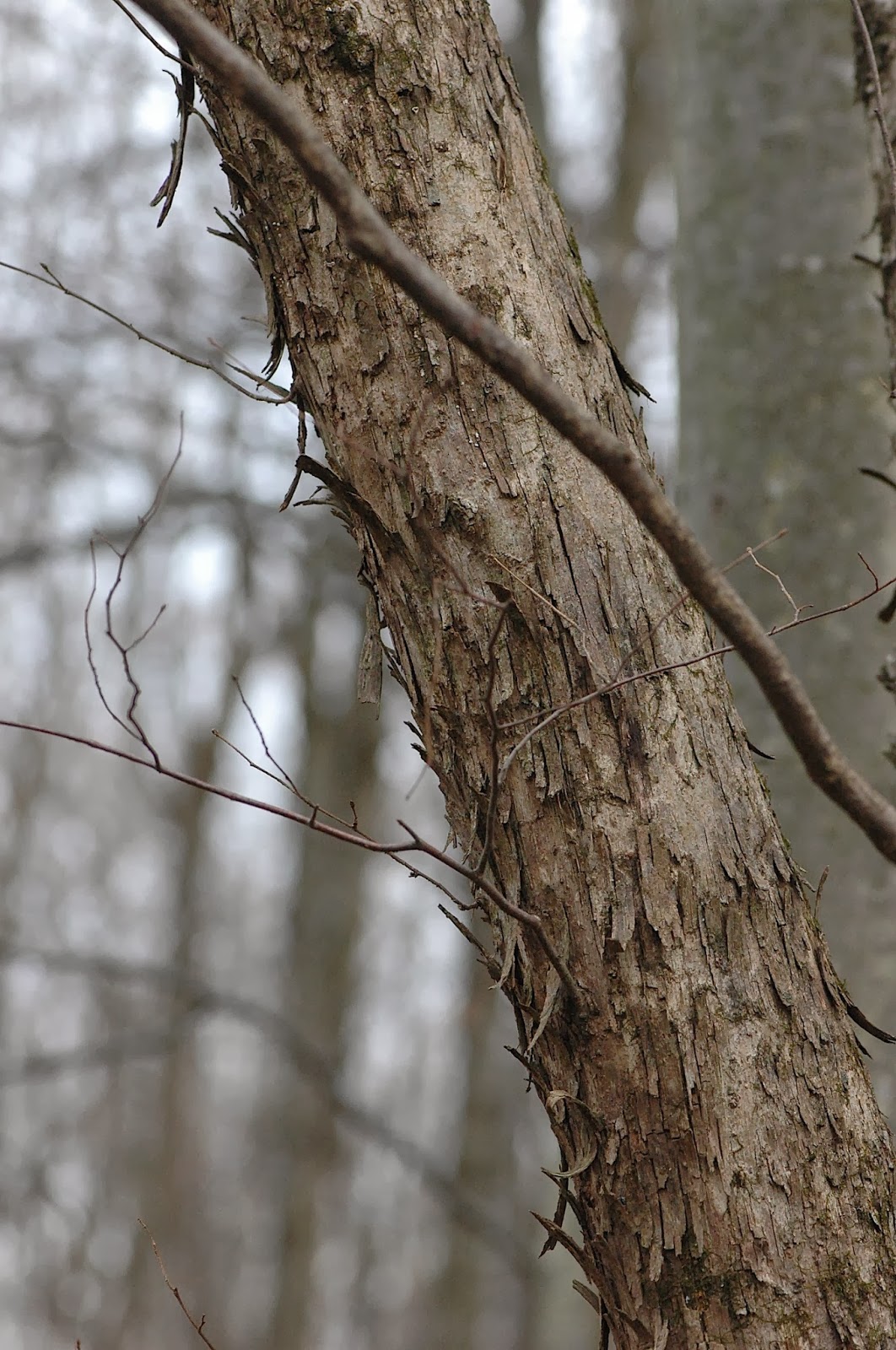 Ostrya virginiana, is also known as Hop-hornbeam. With age the bark appears to have been run through a paper shredder. 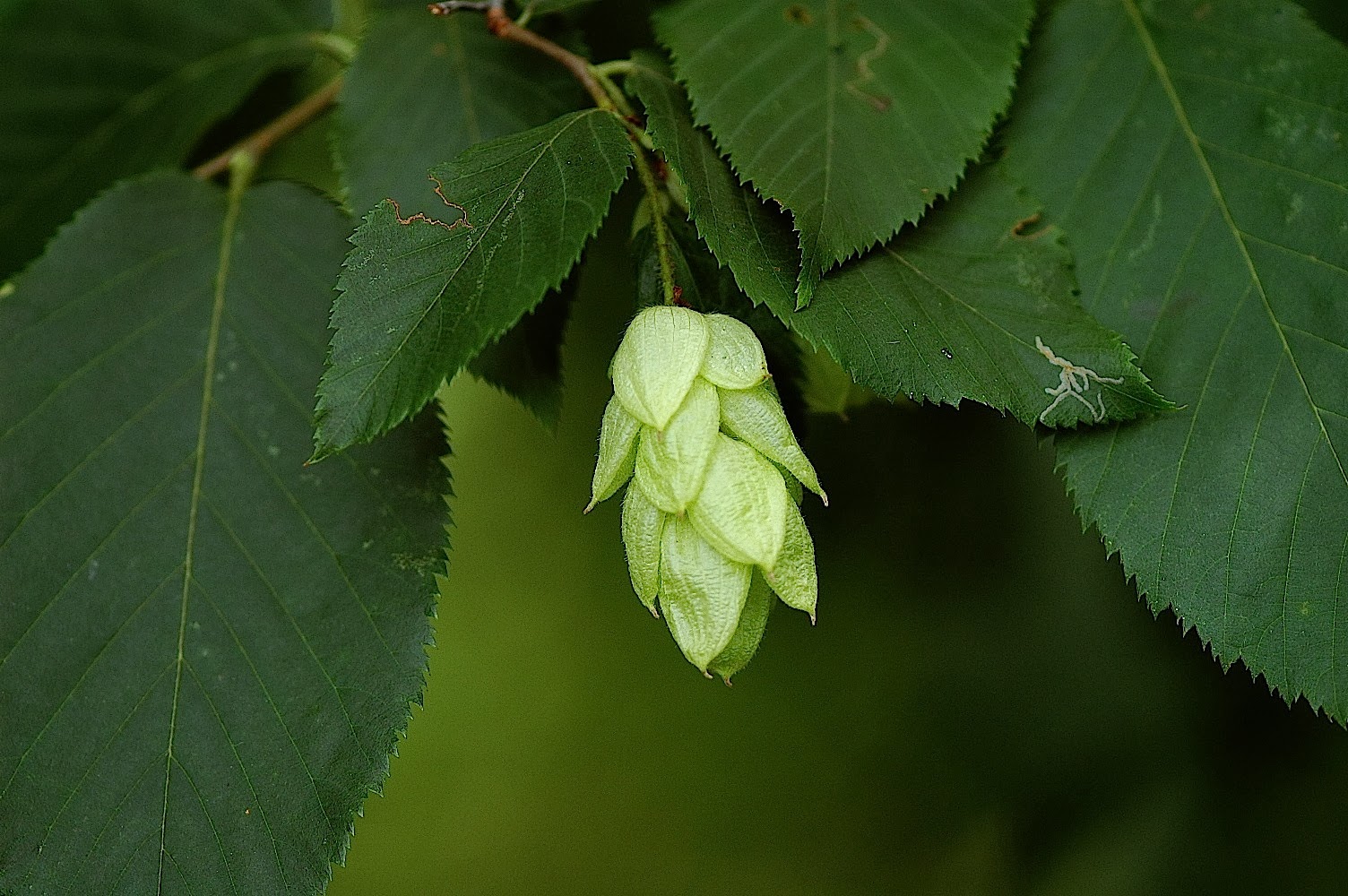 The common name comes from the clusters of fruit that resemble the Hops used to make beer. A click of the photo will show a close up of the fruit stalk. They contain detachable hairs that act like stinging nettle, so be careful when handling them. 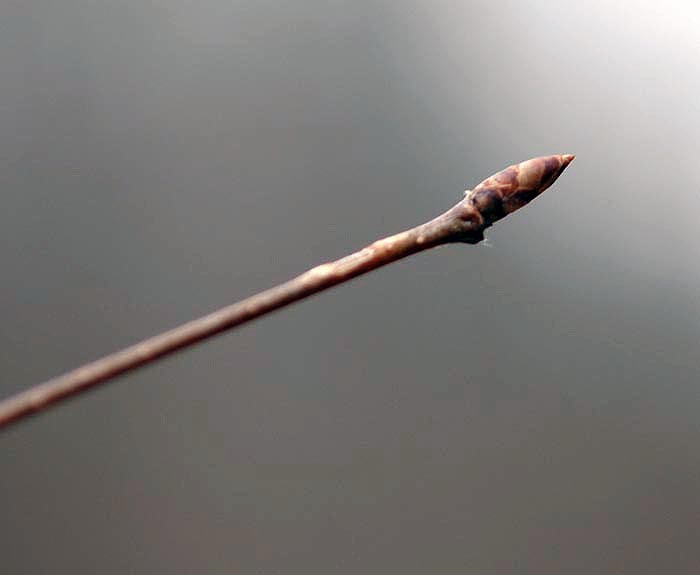 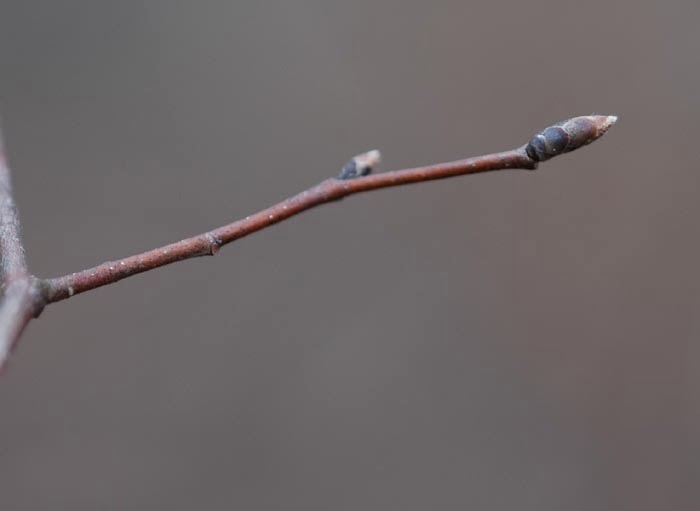 Ostrya buds are round or torpedo shaped. The scales overlap in an alternate pattern. The bud scales also typically alternate between yellow and brown. Some populations may show all black buds. 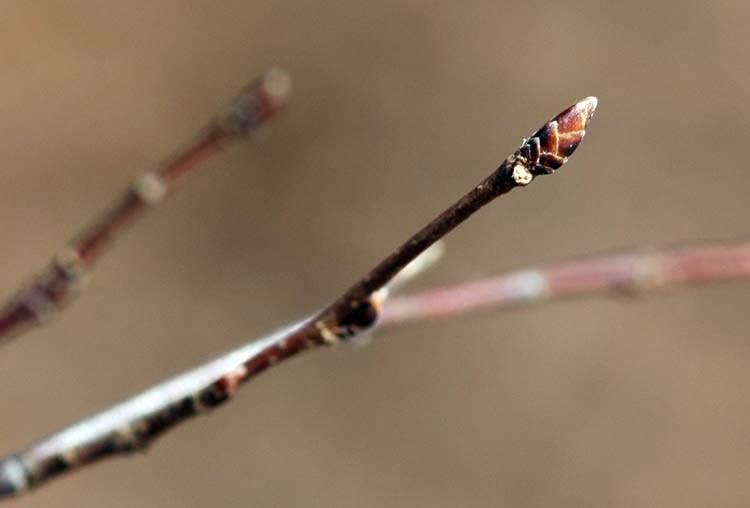 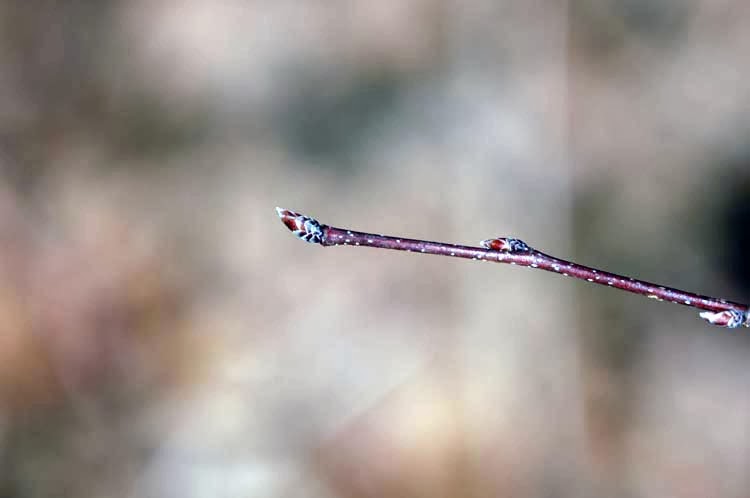 Now look at the difference in these buds. Besides the color, the scales are stacked in rows. The bud itself is not round, but angled or pyramid shaped. This is the other ironwood species. 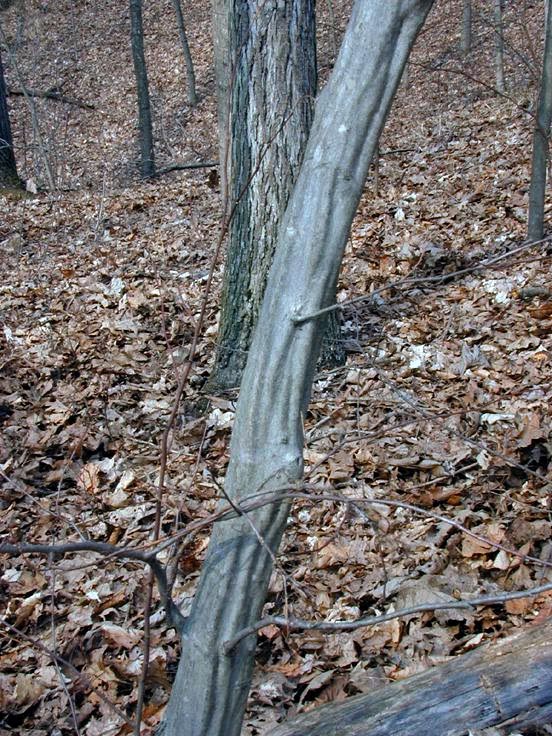 Carpinus caroliniana, known as Ironwood, Blue Beech, and American Hornbeam. No need for such common names, just look at the bark, very muscular. I much prefer the fourth common name, Musclewood. Both Carpinus and Ostrya have very hard wood. They were used for umbrella handles, canes, bows, wedges, and prying poles or early crowbars back in  the day. 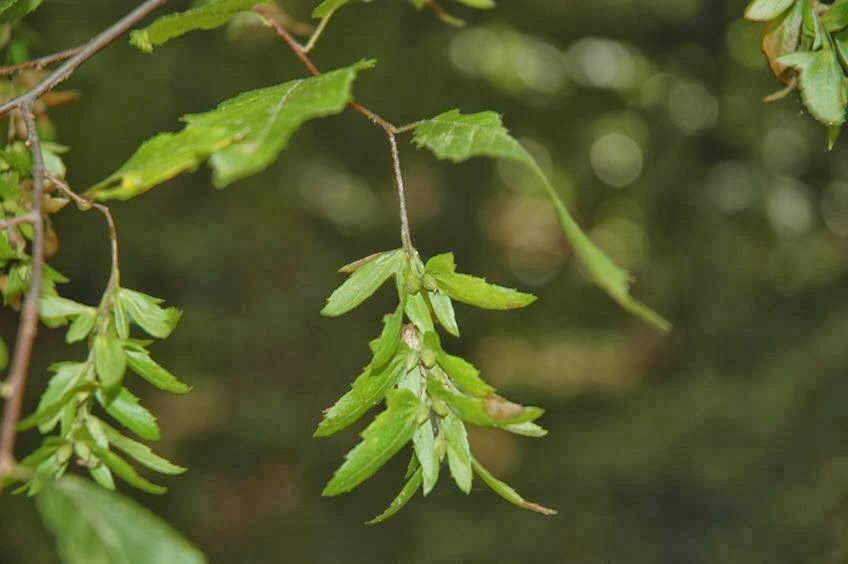 These and the following species all have their own genus because the fruit is different. Musclewood fruit contains a small seed subtended by a three pronged leafy bract. The fruit, bark, and buds are discussed here because the leaves look the same between the two Ironwoods. 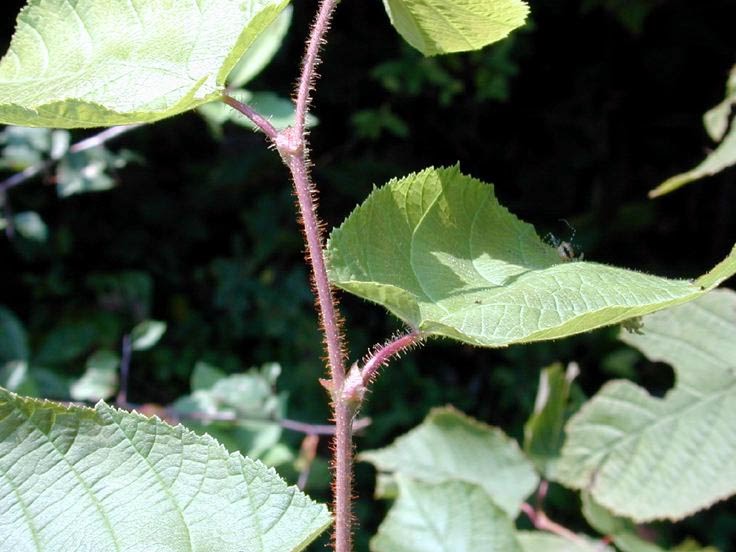 The leaves on this species are much broader than all the previous trees. This is American Hazelnut, Corylus americana. Hazel is a shrub. New growth twigs show these gland tipped hairs. This is a good identification character, but they easily break off when handled. 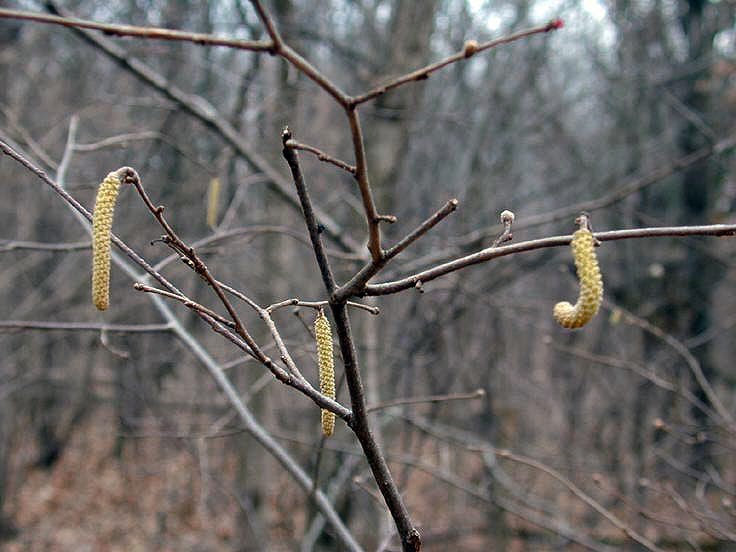 The catkins on Betula, Carpinus, and Ostrya, are usually concentrated at the ends of the twigs, and often in threes. On Hazelnut, they can be located anywhere, and often occur in long rows. In fall and winter theses yellow catkins are tightly wrapped. They can be straight or curled like a caterpillar. 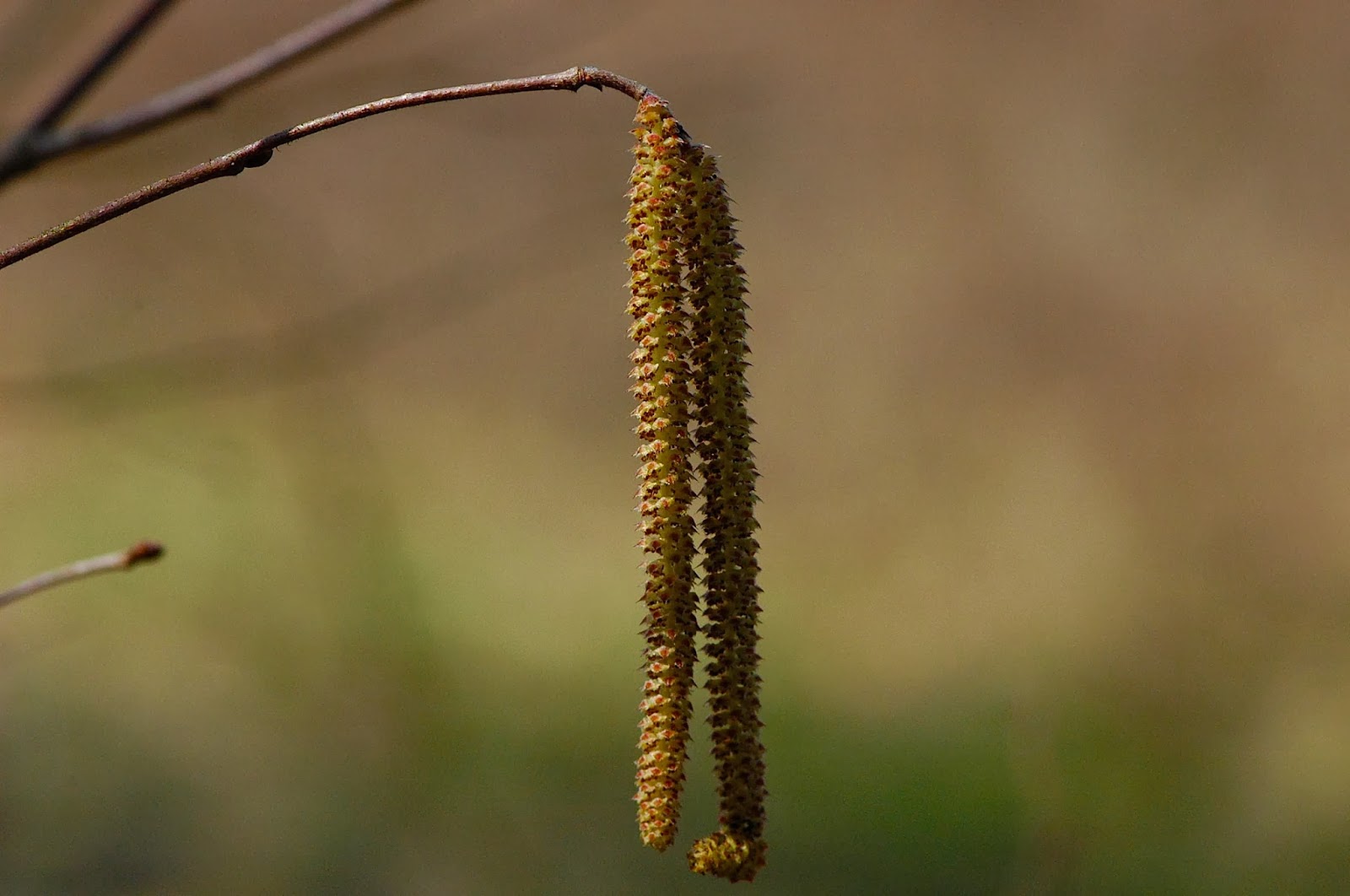 Come spring they soften up and become elongated. The catkins in this family are all male. They release their pollen, and the wind carries it to the female flower. 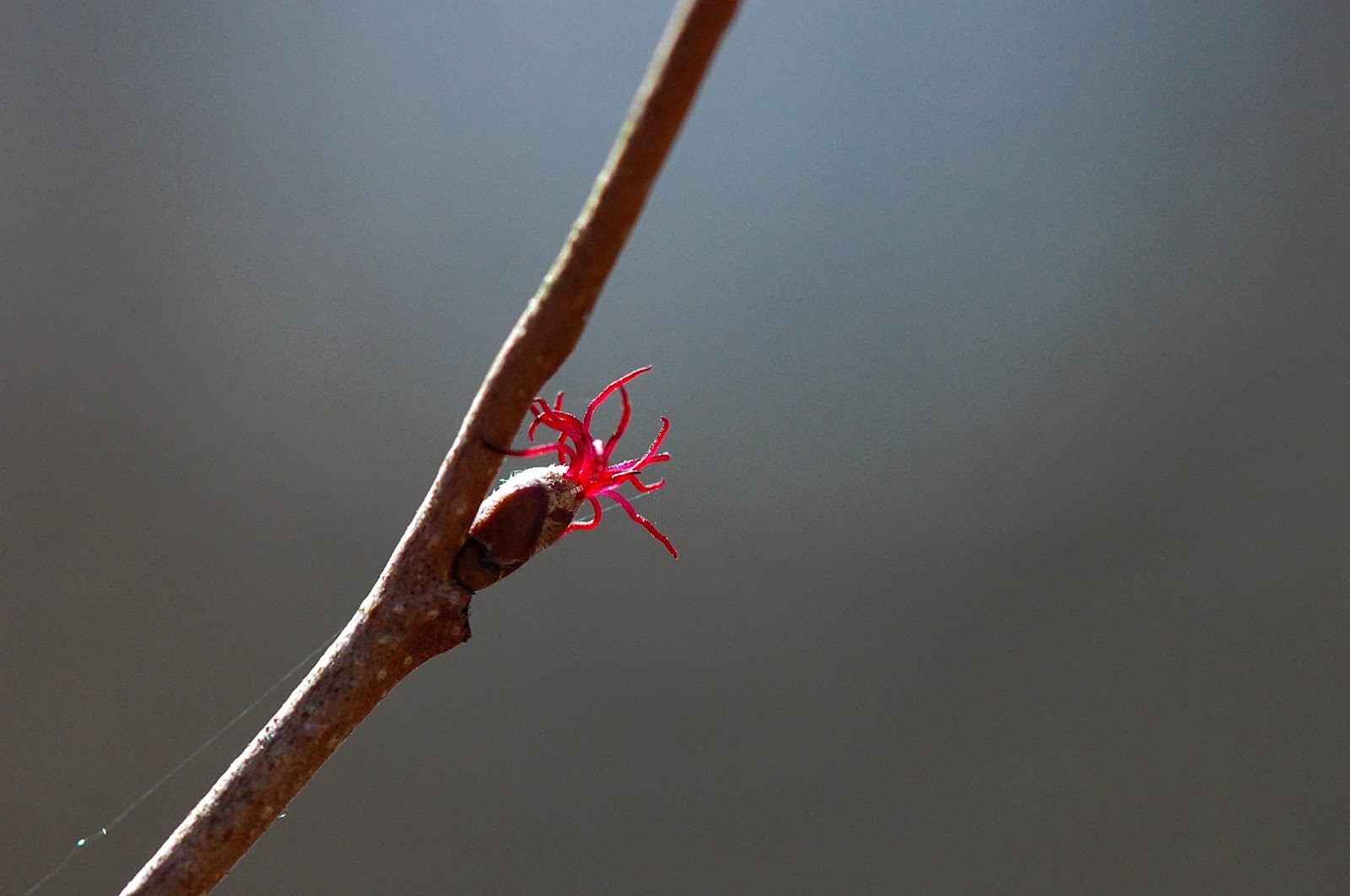 And here is what she looks like. Popping out of a bud scale is a magenta, spider like flower without petals. 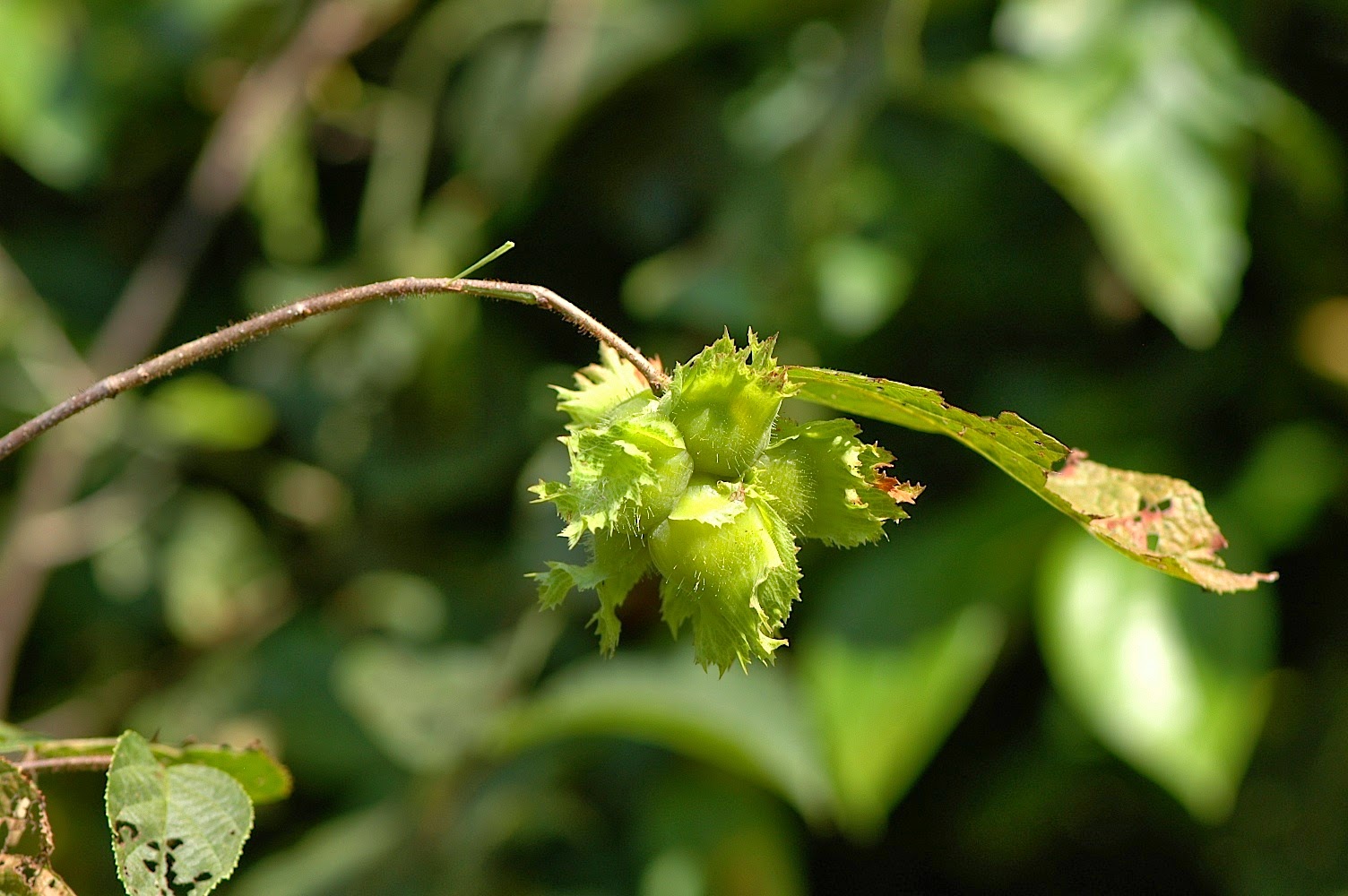 Upon fertilization, a cluster of green fruit begin to grow, surrounded by leaf like bracts. 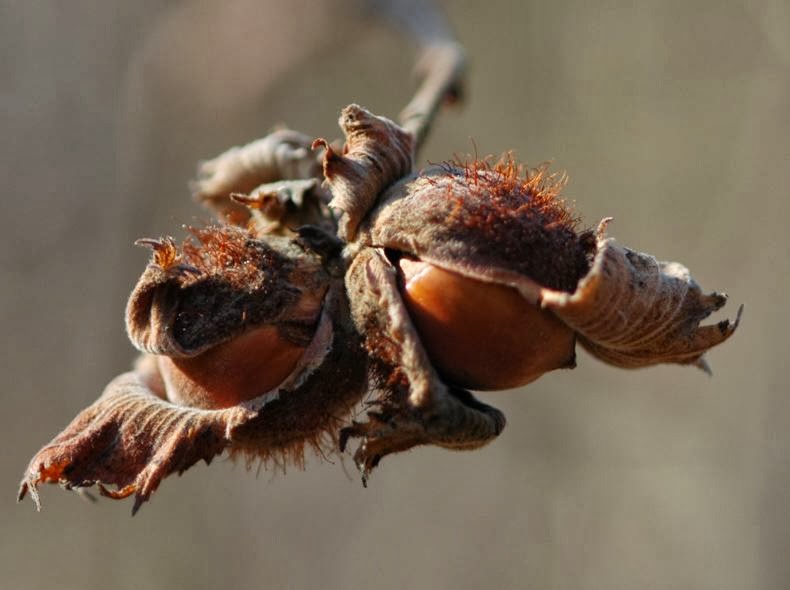 At maturity, you have our own version of a Filbert's Nut. These are just as edible, and are also sought after by wildlife. 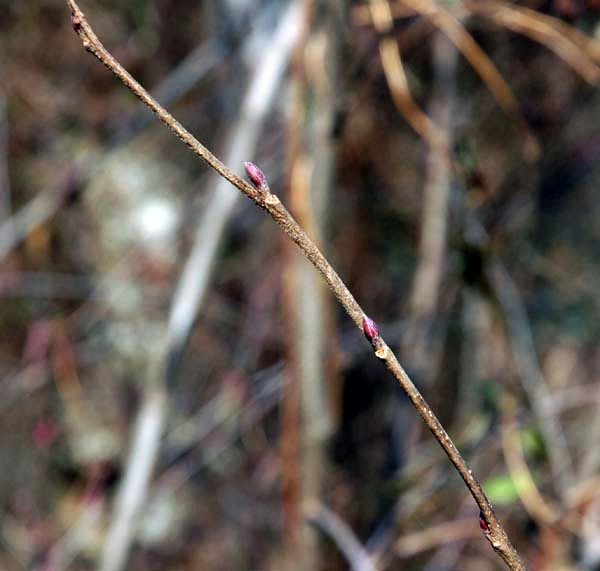 It's the color purple, call Oprah. You don't come across purple buds very often, let alone those that are stalked. That brings us to the last members of the family, the Alders. We have two species here, the native Smooth or Common Alder, Alnus serrulata, and the introduced European Black Alder, Alnus glutinosa. 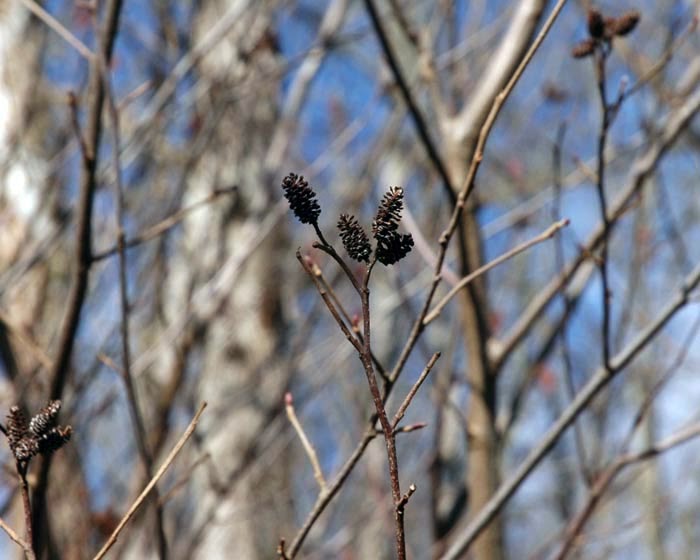 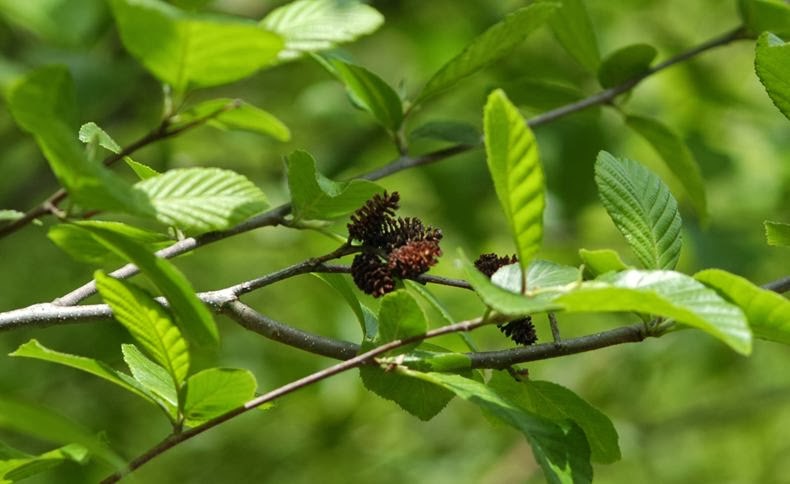 At the risk of repeating myself, Alders are in their own genus too because the fruits are different. They look like little pine cones. The fruit appears the same with both species. The leaves are widely egg shaped and end in a blunt tip. 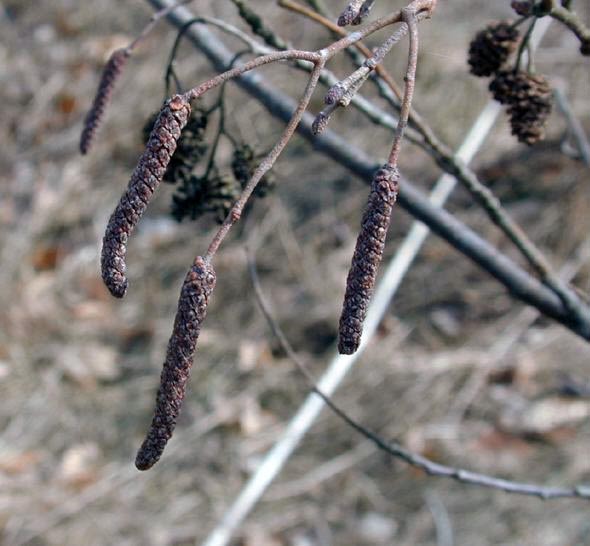 Like the buds, the catkins are also purple. Buds, fruit, and catkins are similar between both species. Look to other characters to split them. 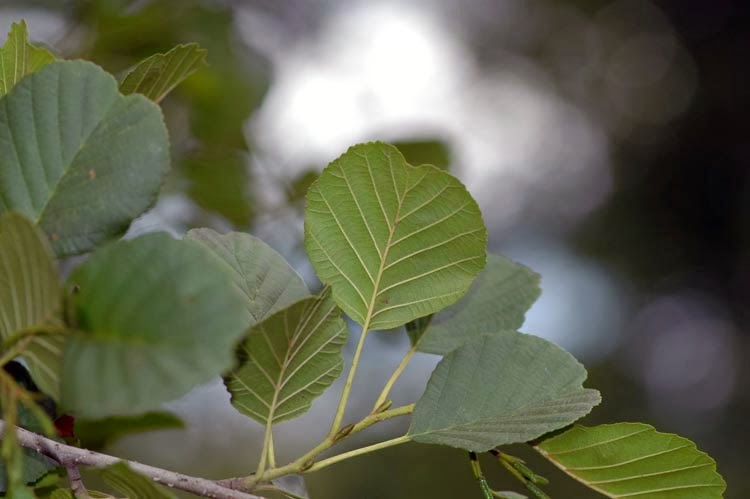 First, not all of the Black Alder leaves come to a point. Many of them have U shaped tips, like a bite had been chewed out of the top. Alders have nitrogen fixing bacteria on the roots, so Black is planted a lot in reclamation projects. It does not appear to be invasive. 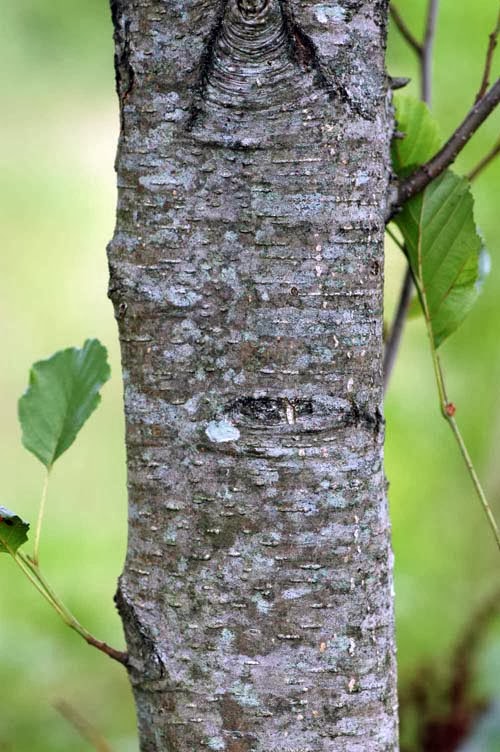 Second, look at the bark. European Black Alder has not been with us for a long time. So I have never found much in any text that discusses the difference other than the leaves. What I have found is that Black Alder will grow straight and tall into a small tree. The bark stays black, and the horizontal lenticles remain visible. 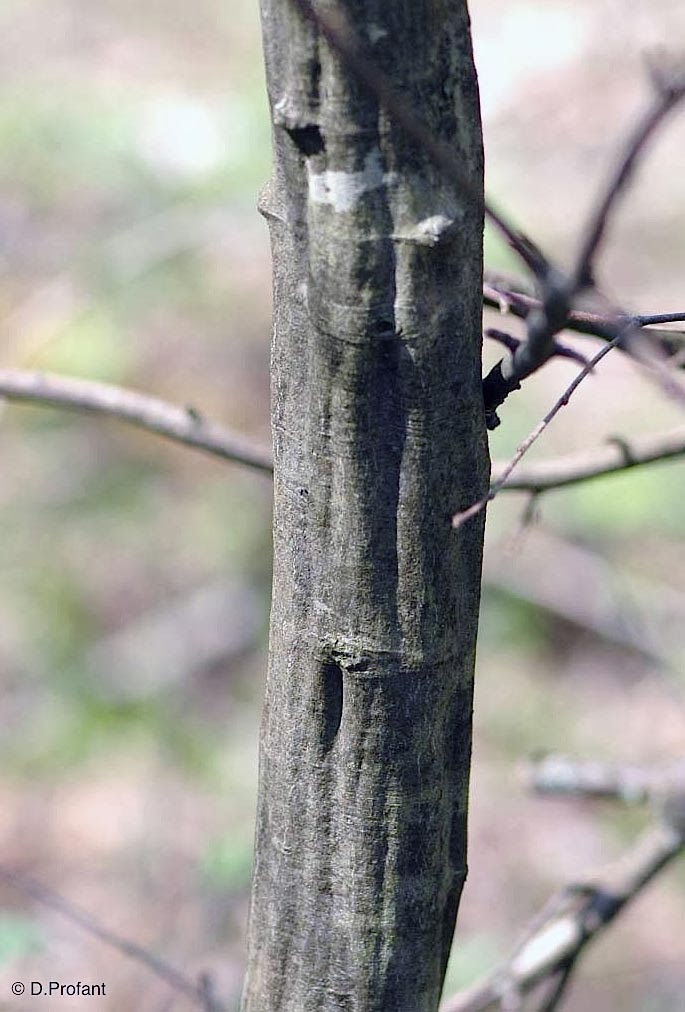 Smooth Alder is a bushy plant growing as a shrub. With age the bark becomes gray and resembles Musclewood.
Posted by DenPro at 10:26 AM