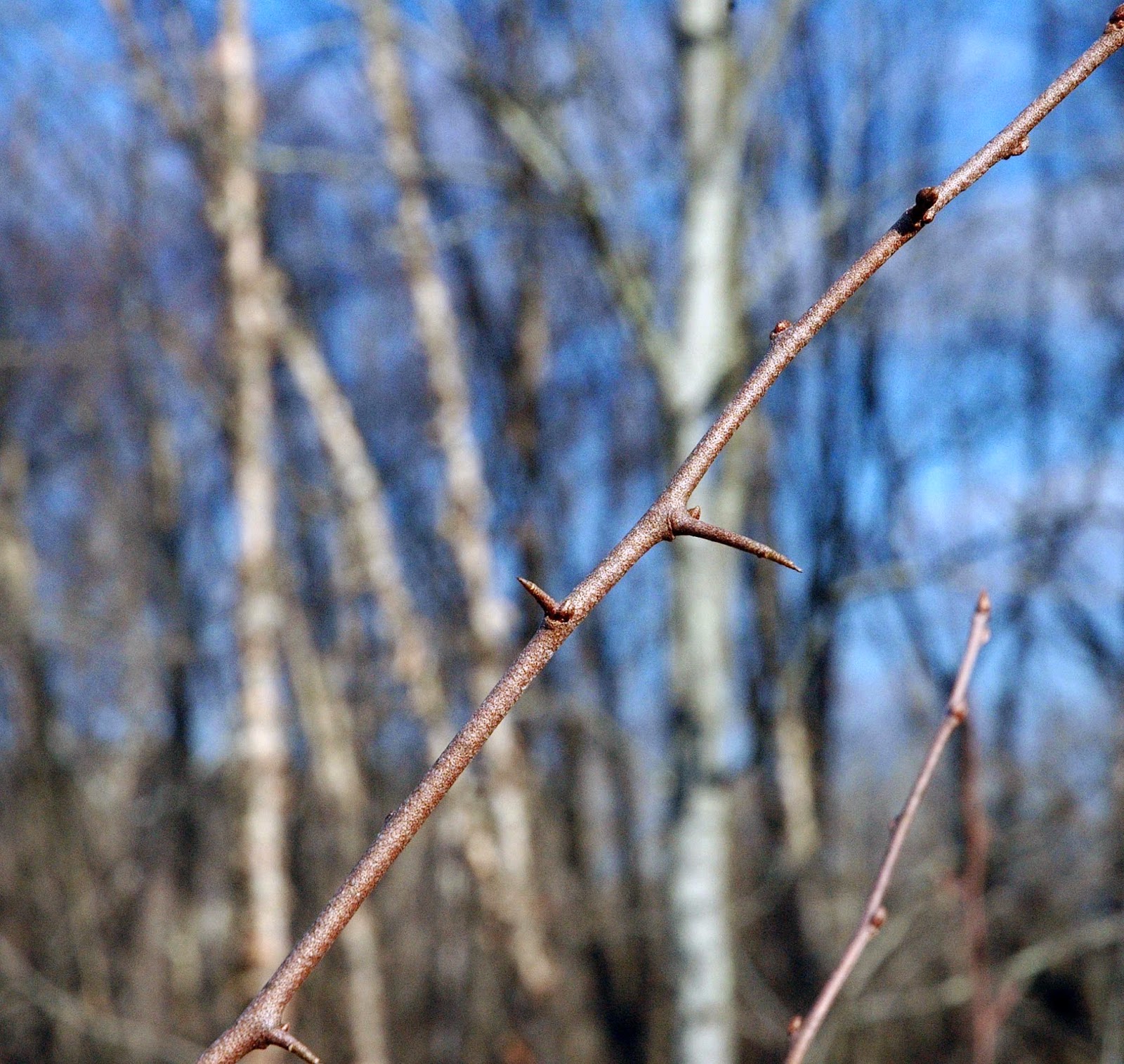 Those woody plants that scratch and pierce our skin when hiking are often called some pretty colorful things by people. I will avoid such language, and describe exactly what they are running into. These "thorns" of Autumn Olive, Elaeagnus umbellata, are often referred to as branching spurs. This means they are not true thorns, just sharp twigs. 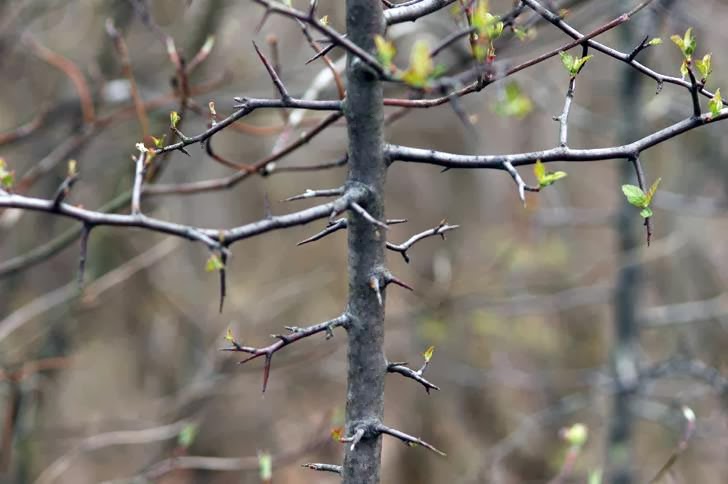 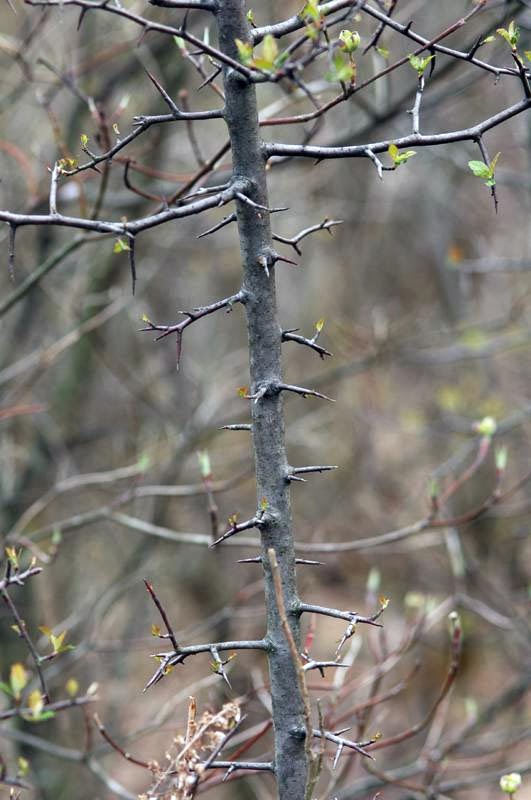 Wild Crabapple, Pyrus coronaria, is another plant with what we call "false thorns". If you feel a thorn that is bumpy, then it's just a pointed twig. Thorns will be smooth. 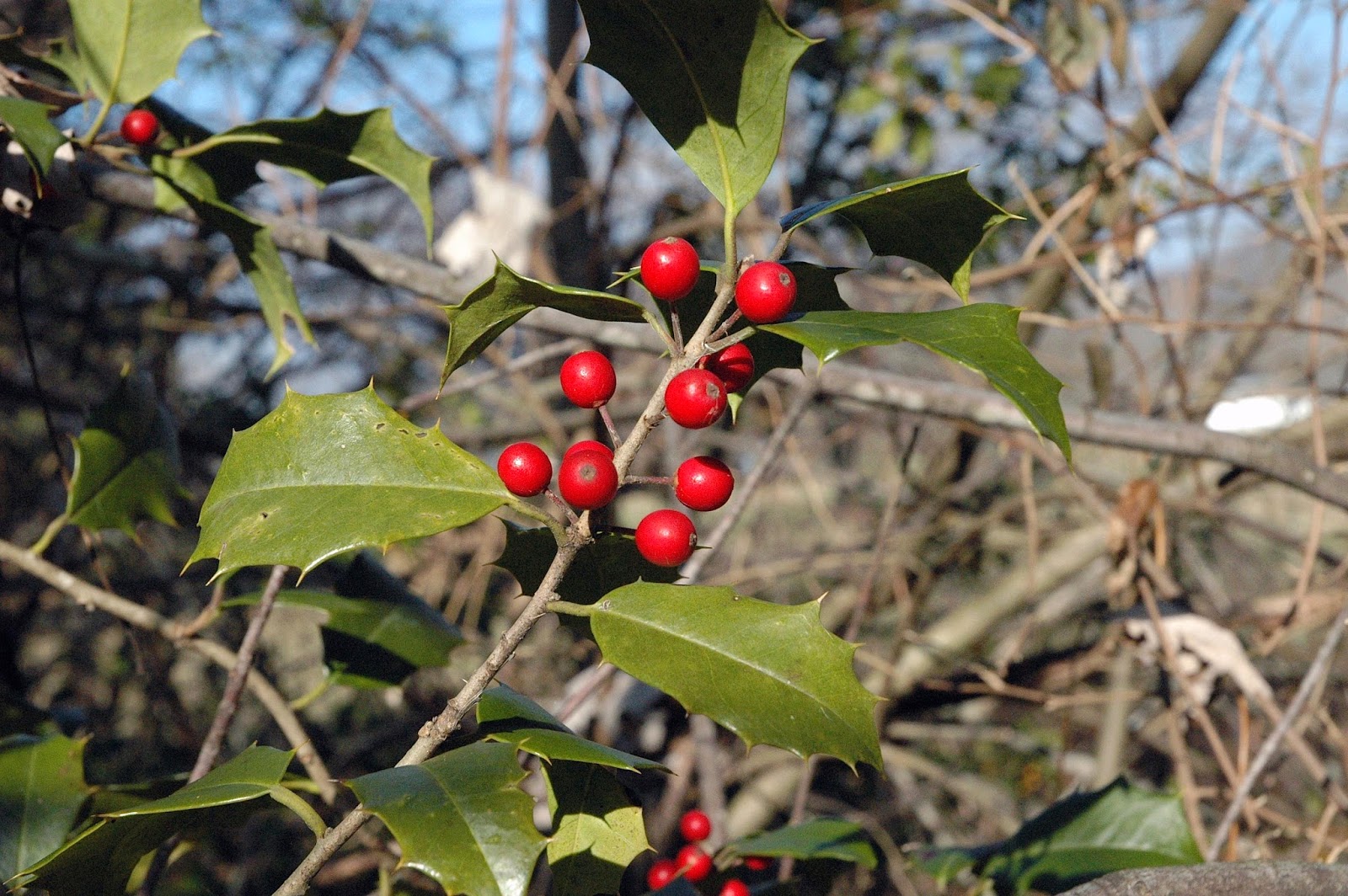 American Holly, Ilex opaca, is often described as having thorny leaves. They are not thorns, but spines along the leaf margin. 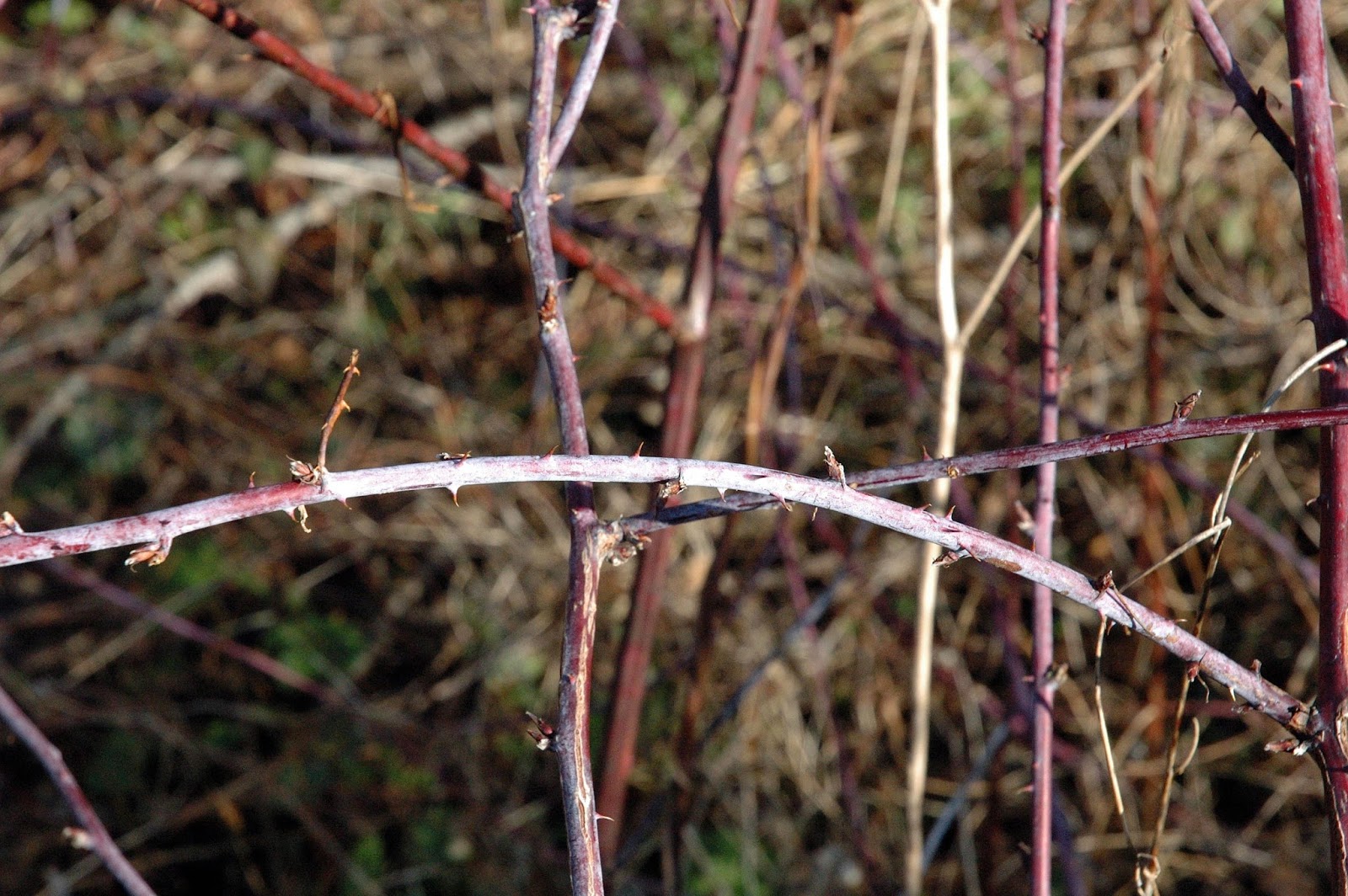 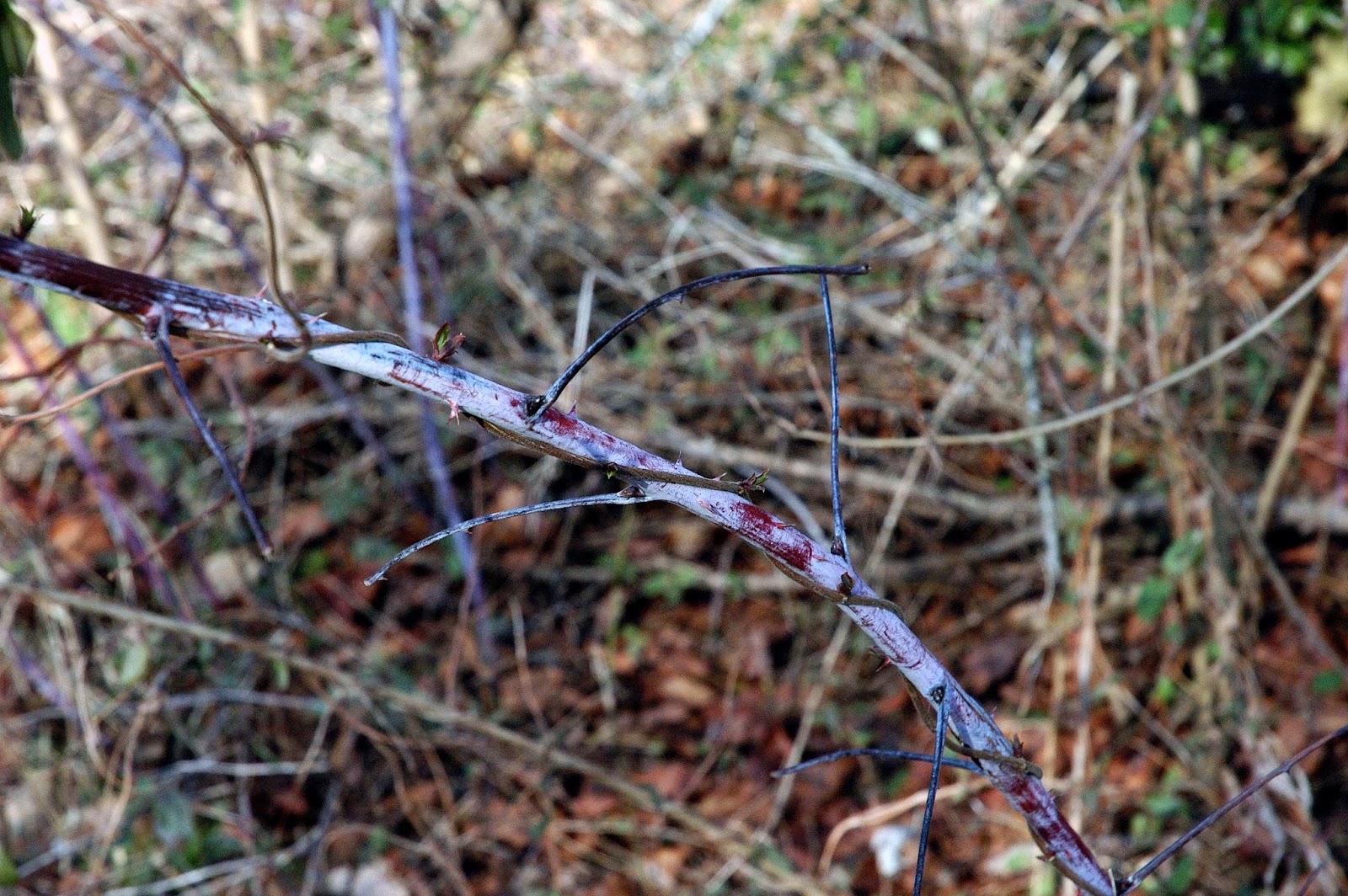 Another group of thorny plants are the Rubus. This is Raspberry. All of our plants around here have this white glaucous coating, so you don't even need to look at the thorns for identification. 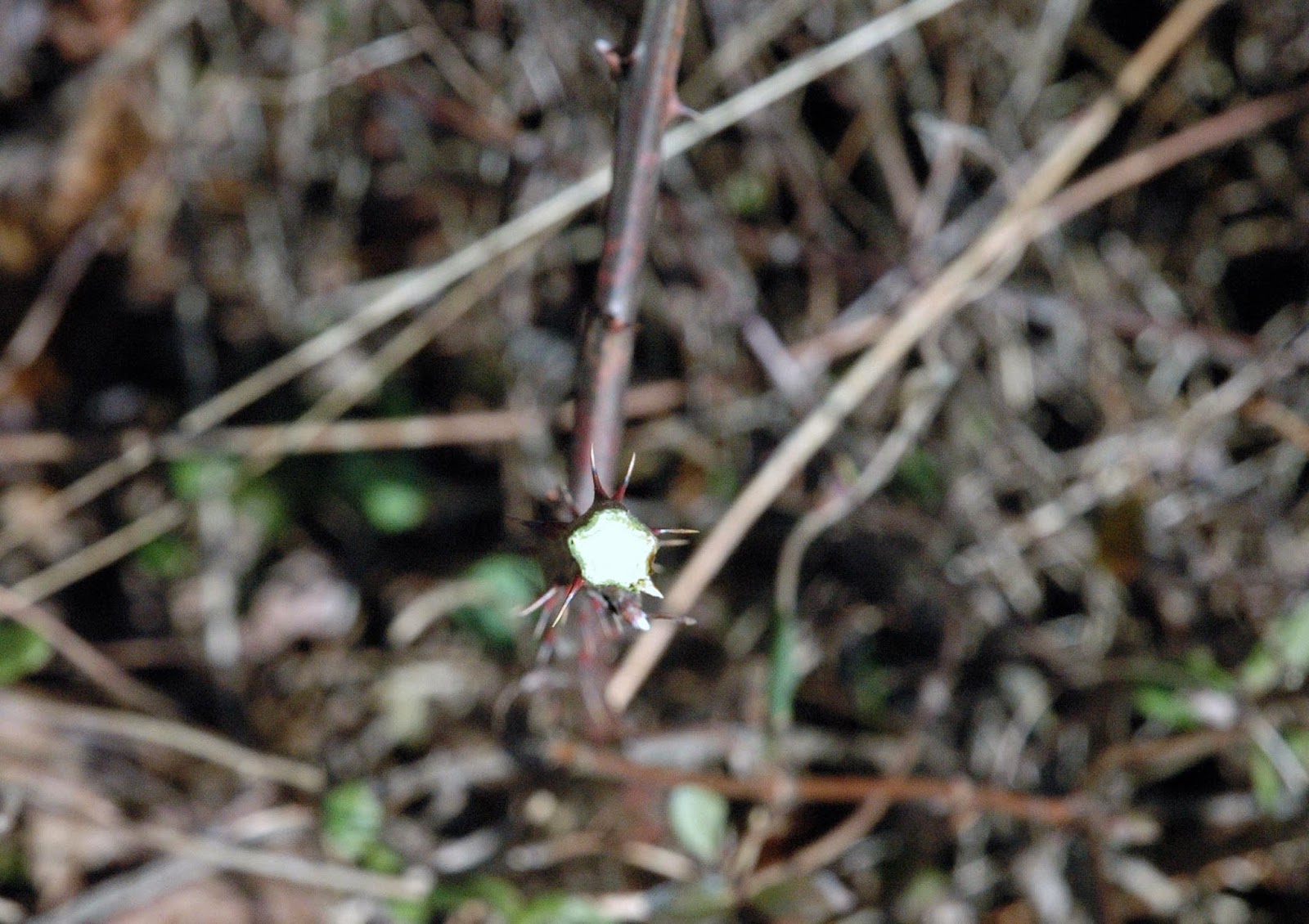 Other piercing Rubus plants are the Blackberries. If you cut the twig and look at the cross section, they are star shaped. Blackberries have five sided twigs. 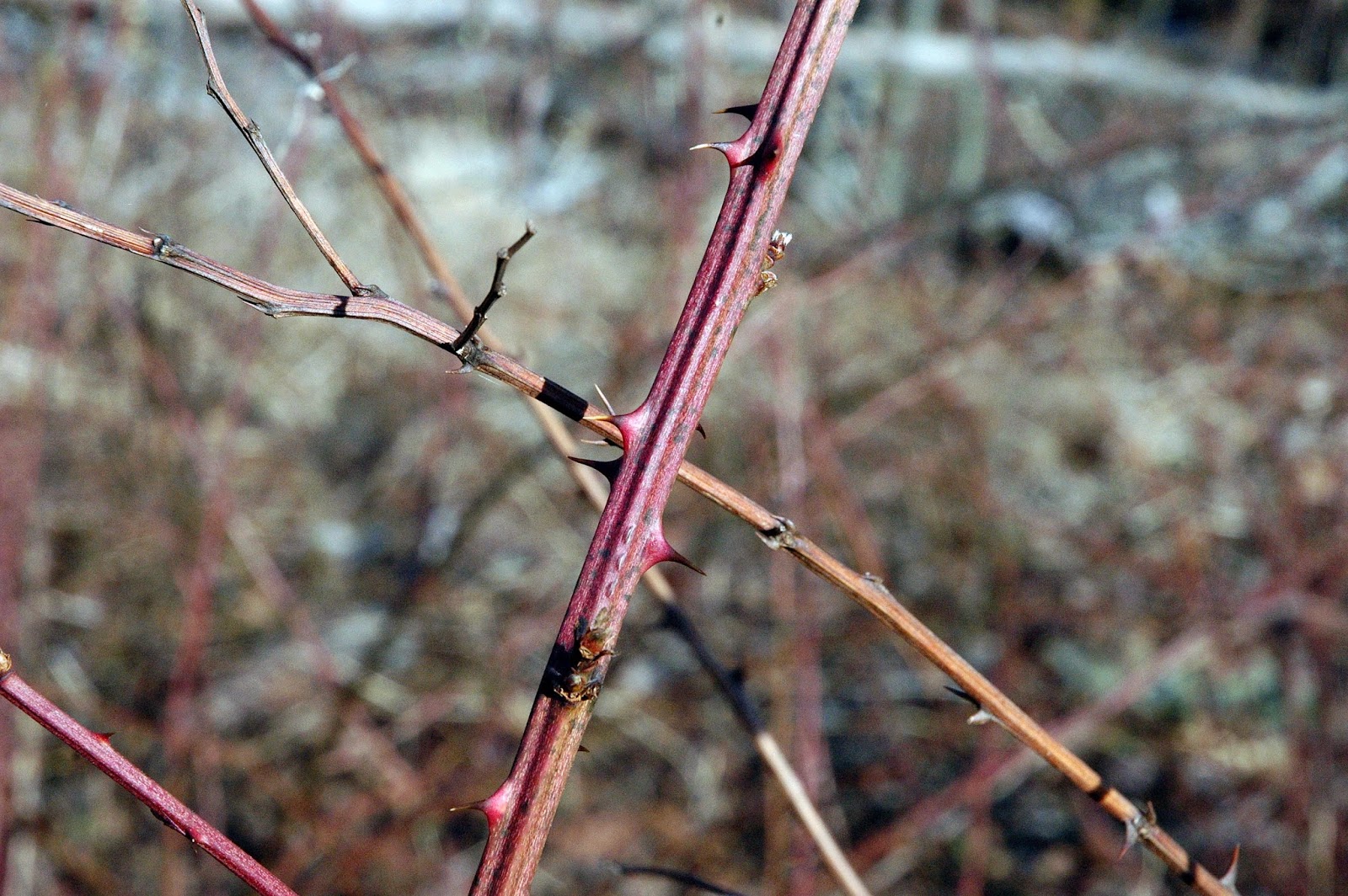 Blackberry and Raspberry are also plants that don't have true thorns. They are called prickles. So what is the difference? Generally speaking, prickles are just outward growths of the bark. True thorns are different tissue that grows out from under the bark. Spines are usually associated in some manner with leaves. 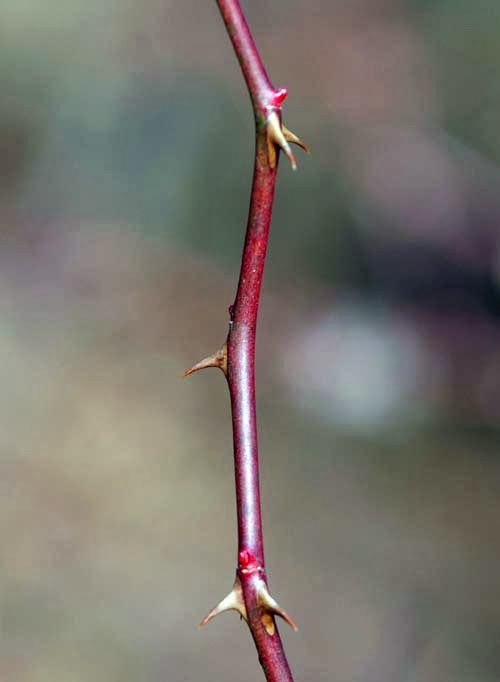 Who hasn't experienced some of the worst prickles of all. These curved fish hooks or shark fins belong to the notorious Multi-flora Rose, Rosa multiflora.

Our native roses can be just as detrimental. Swamp Rose for one, or in this example, the Climbing Rose, Rosa setigera. All portions may have tons of prickles. The problem with prickles versus thorns, is these have a bad habit of dislodging into your skin, ouch! 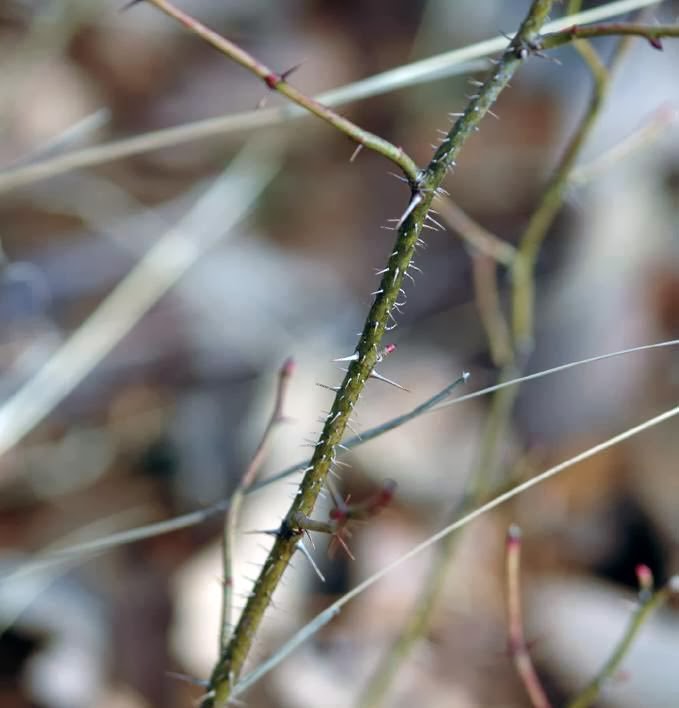 The Wild or Carolina Rose, Rosa carolina, is more of a minor annoyance than a major pain. Look for this Rose in dry upland woods. It only grows 1-3 feet tall. In the upper portions, the prickles are paired. In the lower parts they are thin and bristly. Most often they are colored white. 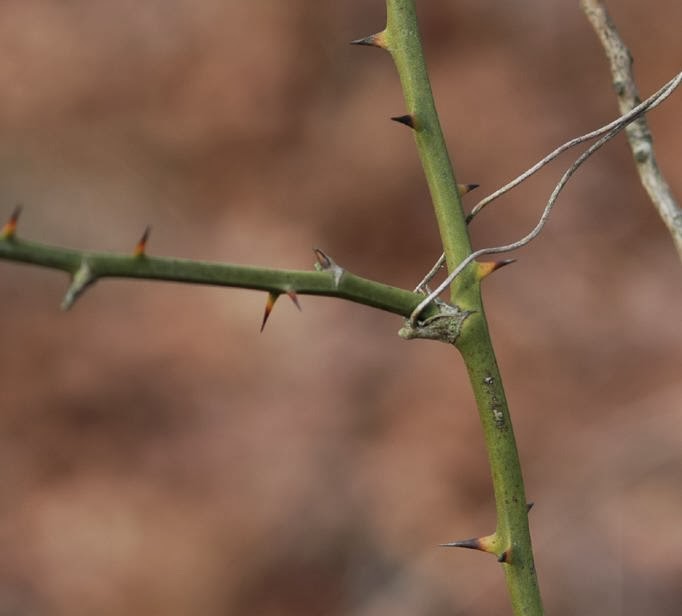 Greenbrier vines also have prickles rather than thorns. This is Sawbrier, Smilax rotundifolia. Sawbrier has square twigs and multicolored prickles that often look like candy corn. Sawbrier prickles are stiff and rigid and will pierce your clothes. This plant can climb on itself and form shrub like thickets. Avoid the "brier patch".  (Brier can be spelled with an a as well as e). 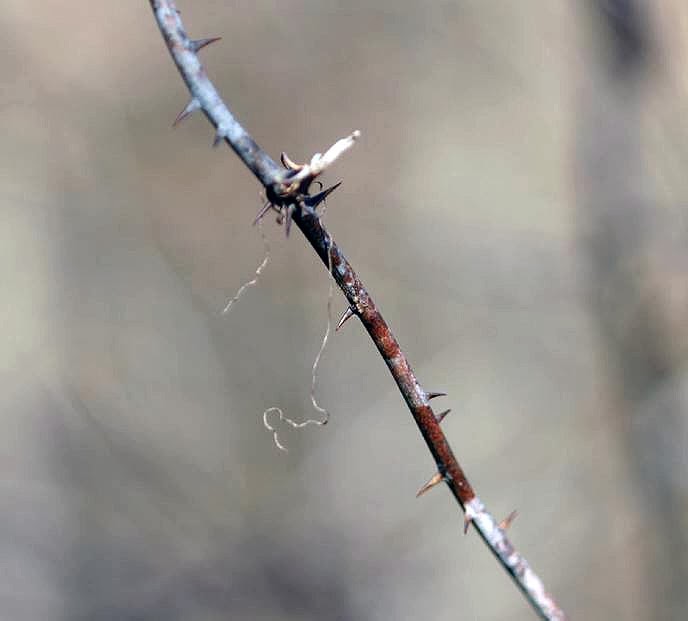 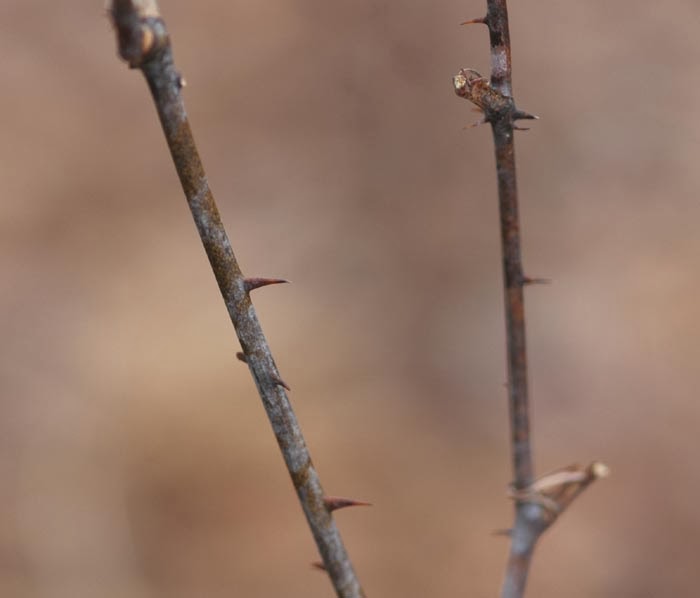 A second species of Smilax is Glaucous Greenbrier, Smilax glauca. The twigs are round and more brownish green than Sawbrier. The prickles are more uniform in color, and more numerous at the bottom of the plant. The twigs may or may not have a white coating in winter. 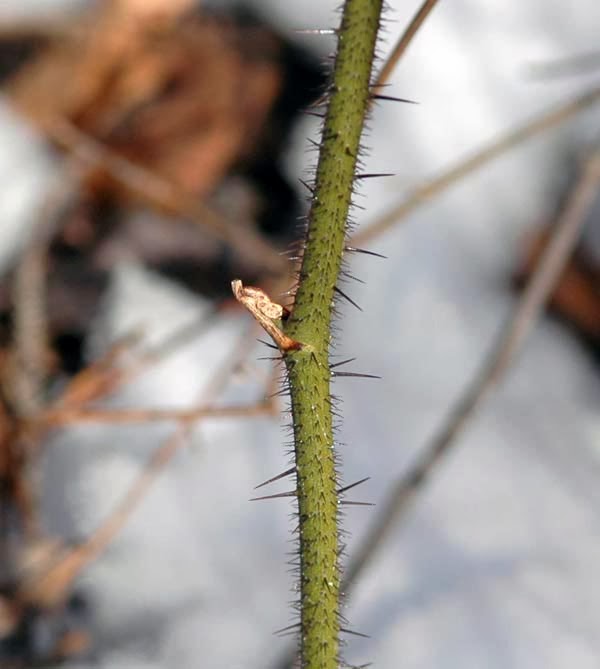 Our third woody species is Bristly Greenbrier, Smilax tamnoides (hispida). It only takes a second to see the main character for identification. The upper portions of the plant may be completely thornless, but look on down to the base. I mentioned Glaucous may have the majority of its prickles at the bottom, and they may be all black, but they are all the same size. Bristly has black "needles" of all different sizes. 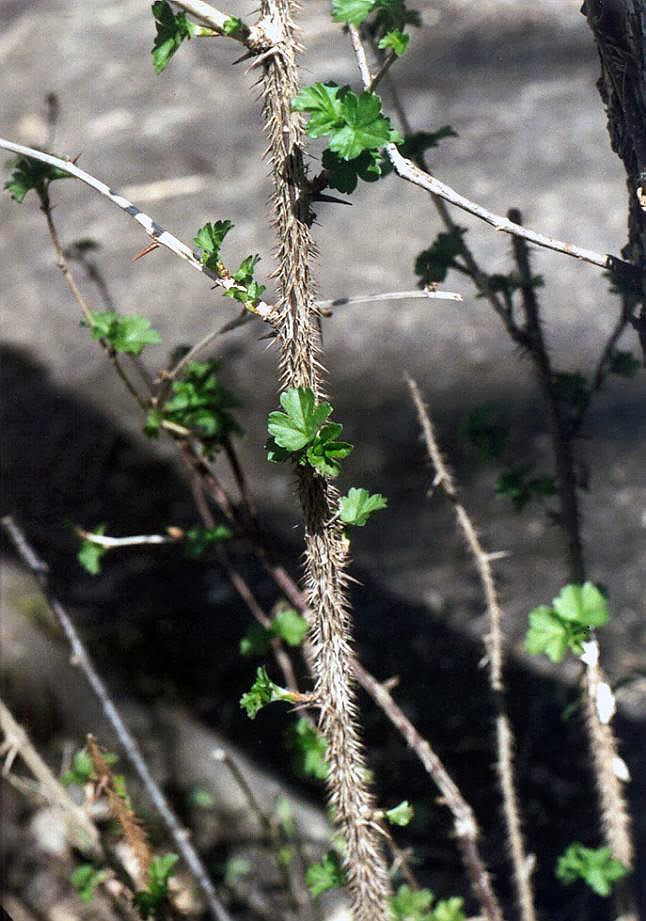 If you thought Bristly looked intimidating, this is even worse. These are actual thorns growing up the stem of Gooseberry or Currant. This was taken on a spring morning in Iowa. The forest understories are covered with Gooseberry out there. This is probably Prickly Gooseberry Ribes cynosbati. Gooseberry fruits are very edible. The fruit on this species is spiny, making harvesting a bit tricky.

In the past, people raising White Pine removed all Gooseberries from an area because it spreads a fungus rust that kills the trees. While there are always exceptions, those Ribes called Gooseberries usually have thorns, and those called Currants are thornless. 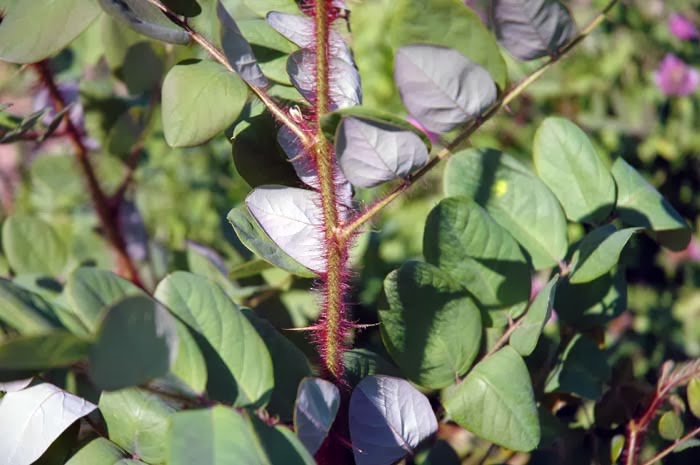 Looking at the stems of this plant, it is similar to Bristly Greenbrier. The leaves though look more like a Locust. Let's try Bristly Locust, Robinia hispida. The red thorns here are actually hairs, and they extend up even onto the flowers. There are sharp spines between the leaflets. Bristly Locust is a southern species often planted in Ohio as an ornamental. 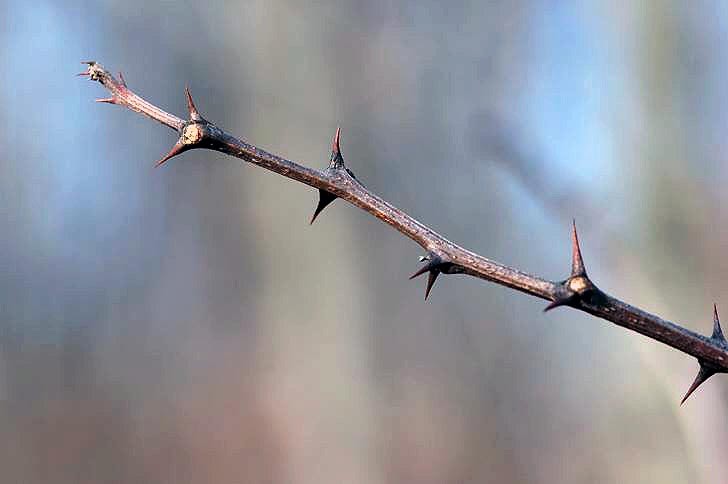 Robinia pseudoacacia, the Black Locust, is the more common species in our area. The twigs are hairless, but each node contains short paired thorns. Again, technically they're spines. 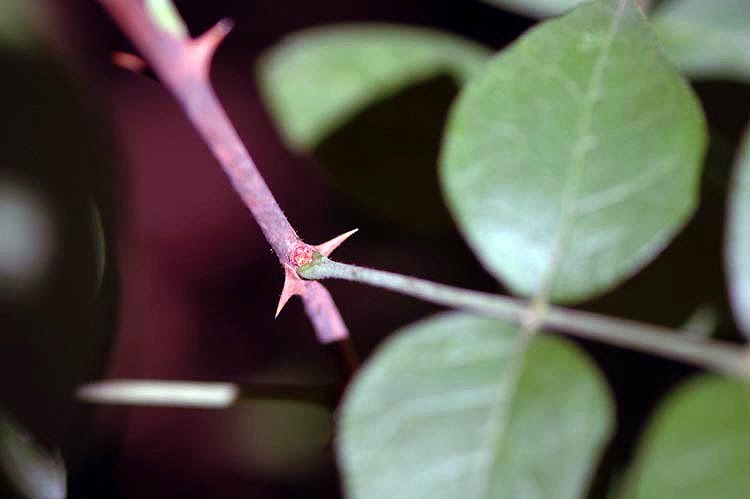 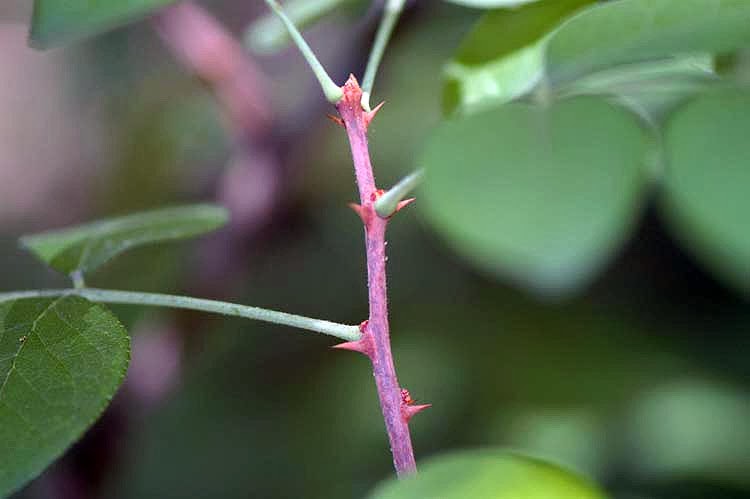 Less frequently seen in our area is a Black Locust look-a-like. With short paired thorns and compound leaves, it may be overlooked. This is Northern Prickly-ash, Zanthoxylum americanum. 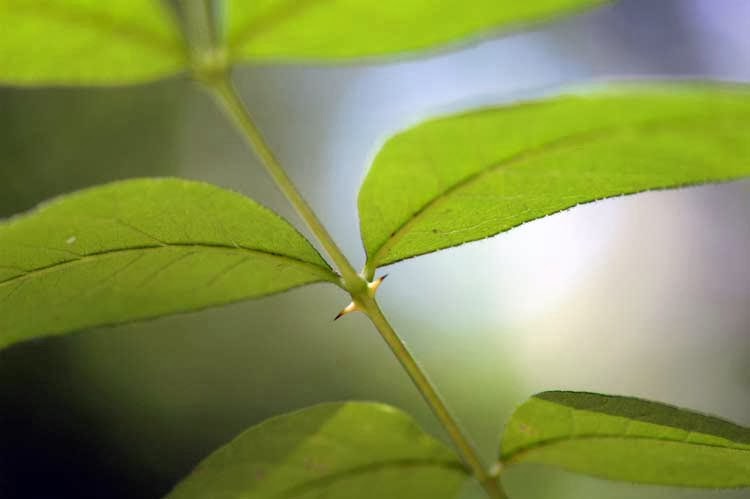 One way to separate it from Locust is to look between the leaflets. They have a spiny rachis. 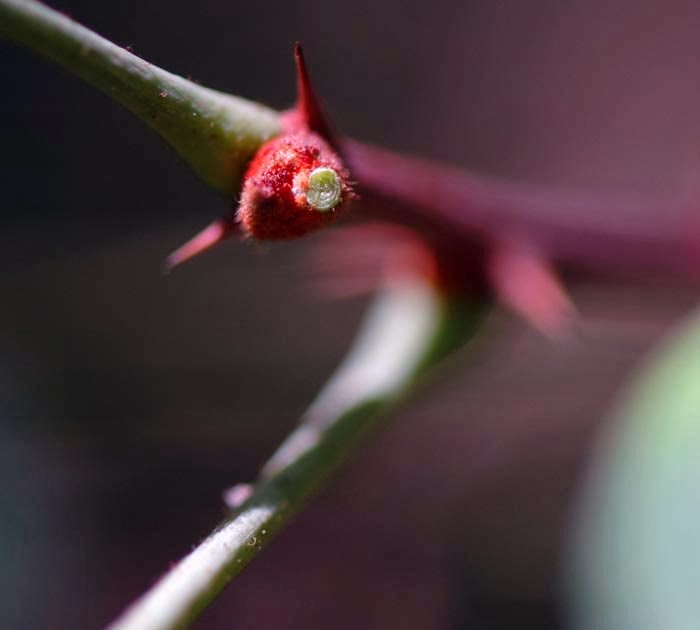 Up close the buds are fuzzy and bright red. It's also called the Toothache Tree. Like aspirin, it is said if you cut a slice of the bark or thorns, it deadens pain in the mouth. Personally I'd use the bark, but I don't think I'd put a thorn in my mouth. 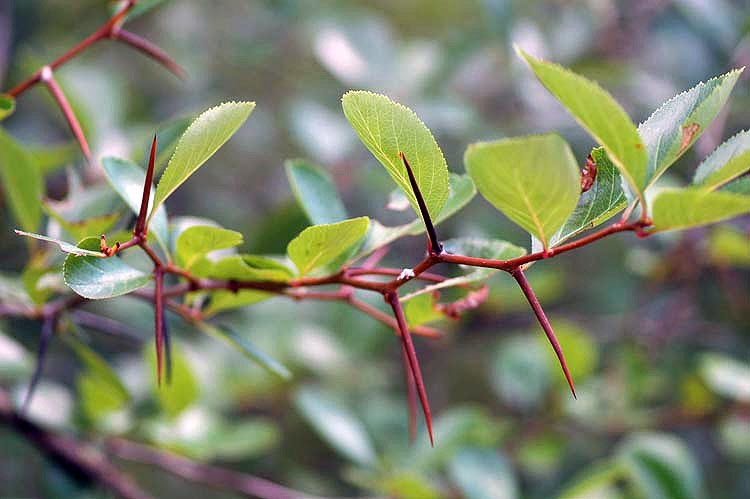 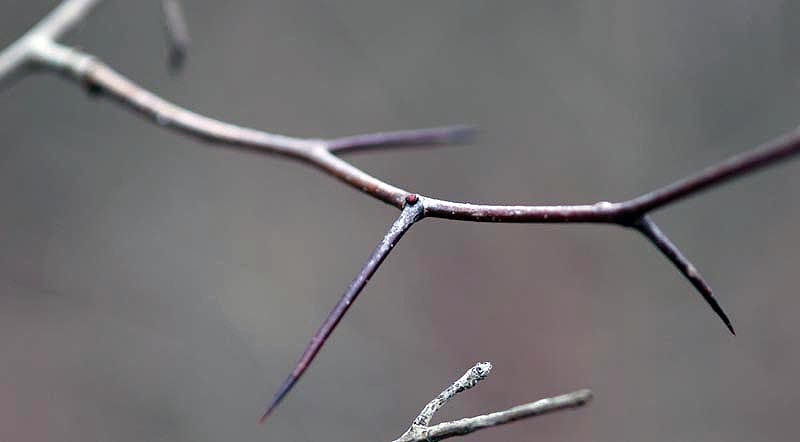 There are so many varieties in this group, the thorns can be long or short, straight or curved. Either way, these belong to the Hawthorn, Crataegus spp. I don't really try to figure out which are which. No matter what the keys say, many of these turn out to be genetically the same species.

These round red buds remind you what your finger tips will look like if you get jabbed by a Hawthorn. 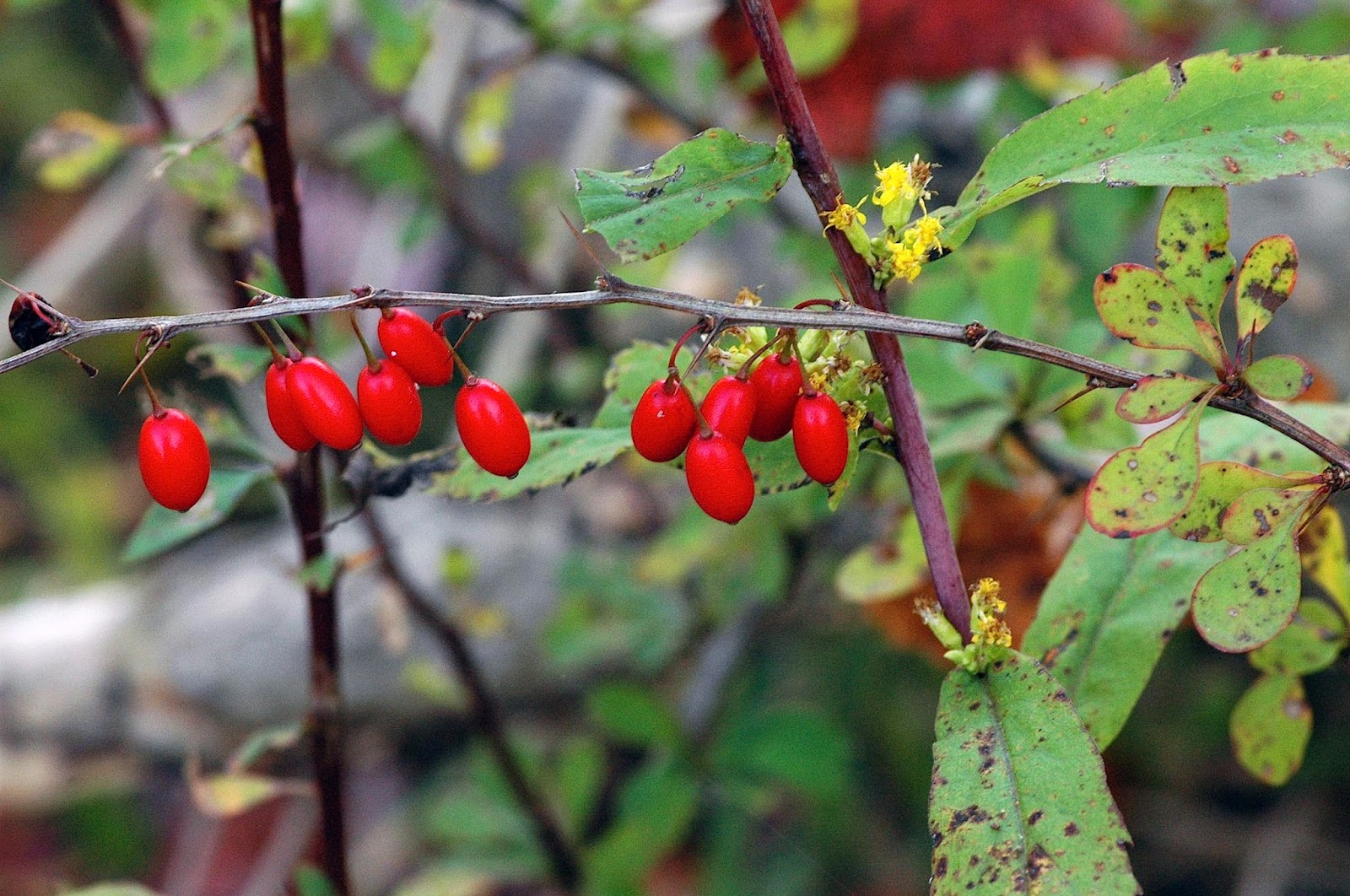 Japanese Barberry, Berberis thunbergii. Its bright red fruit make this an attractive ornamental, but is has escaped and become highly invasive. The leaves are small and spoon shaped. They grow out in clusters, though the plant is actually alternate. The long skinny projections are referred to as thorns, prickles, or spines. The literature is split on what to really call them. I lean towards spines. 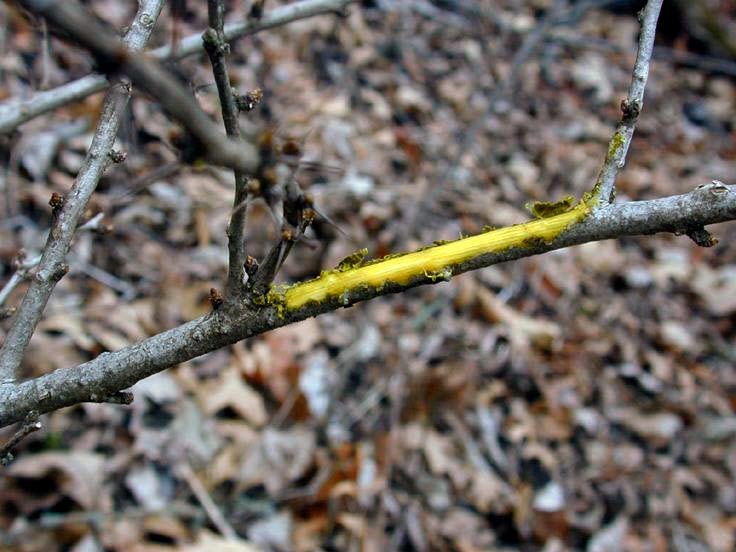 To be sure you have a Barberry, take your knife and scrape the bark. The inner portions are a bright neon yellow. 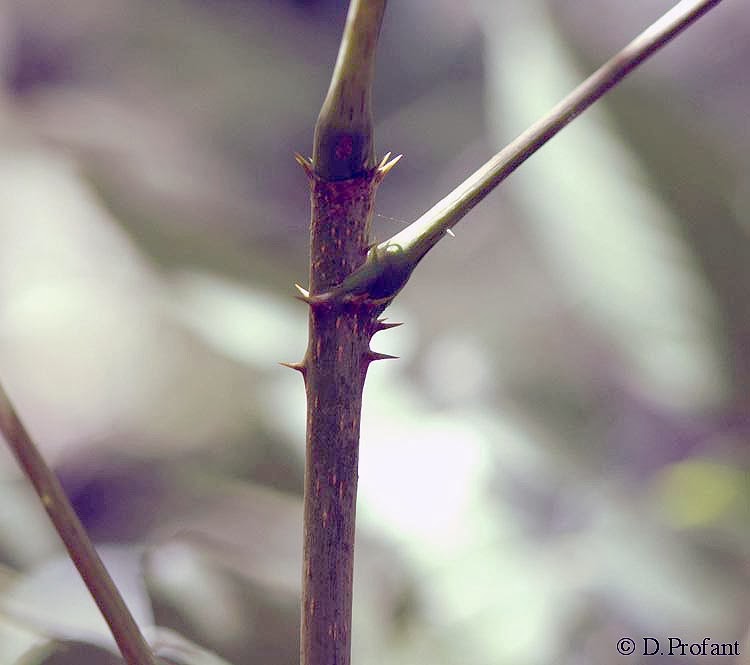 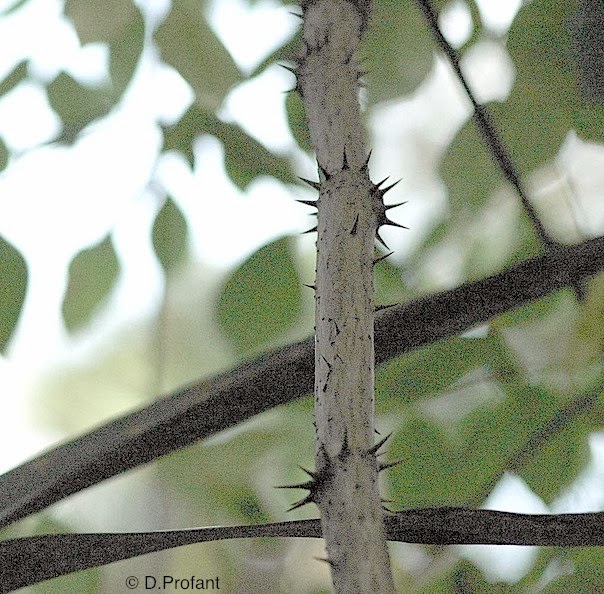 A favorite of mine is Aralia spinosa. Sometimes called Hercule's Club, I much prefer the other common name, the Devil's Walking Stick. The thorns, which again are really prickles, often come out in a circular pattern, much like the Statue of Liberty Crown. In our area, look for it in the Hocking Hills region. 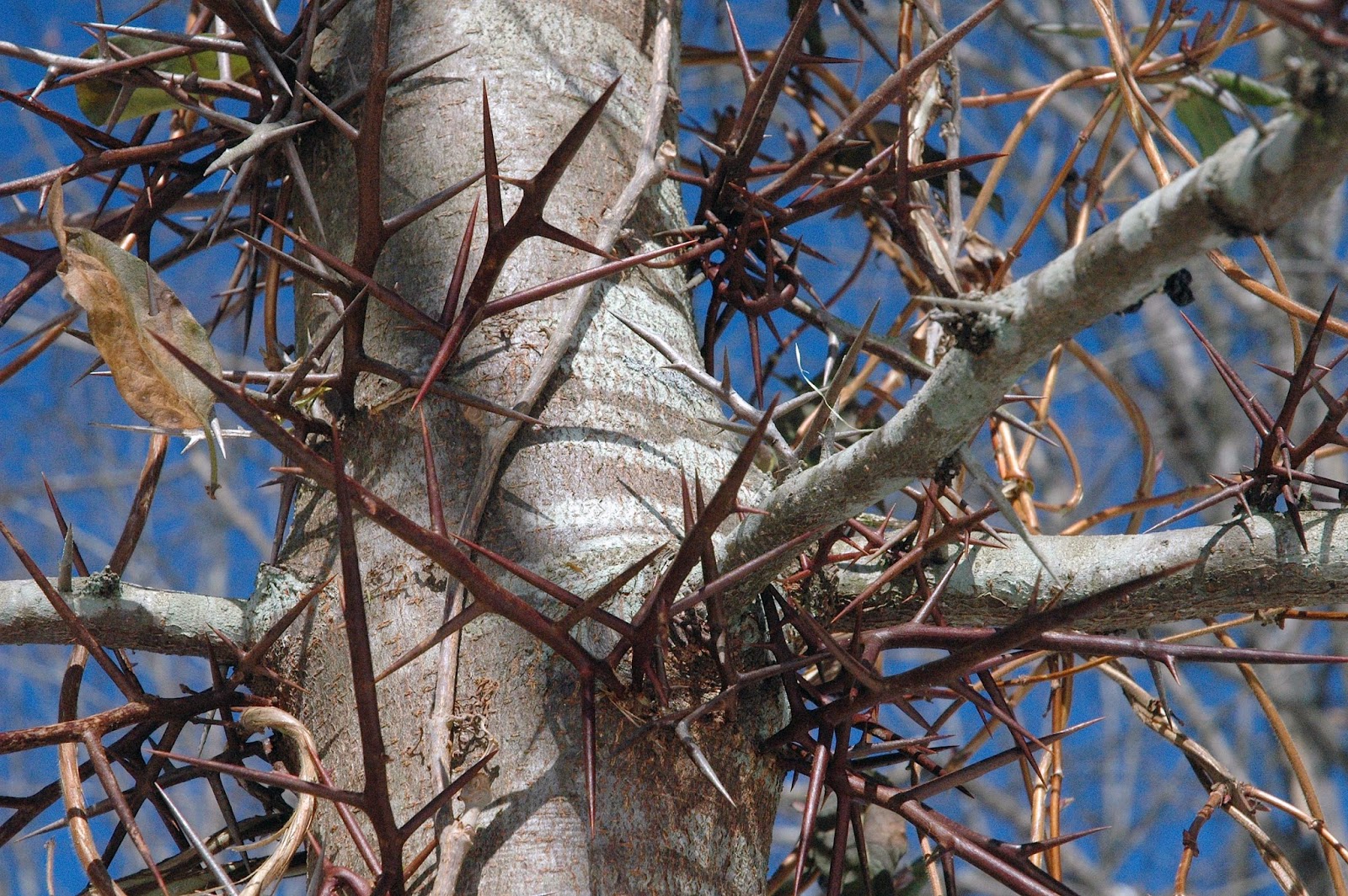 Elvis has left the building. So who is the current king? Without a doubt it has to be Honey Locust, Gleditsia triacanthos. Not only does it have thorns on the branches and trunk, but the thorns have thorns! They are multi-branching, and I have measured some 18 inches long. This is not something you want to get impaled upon. 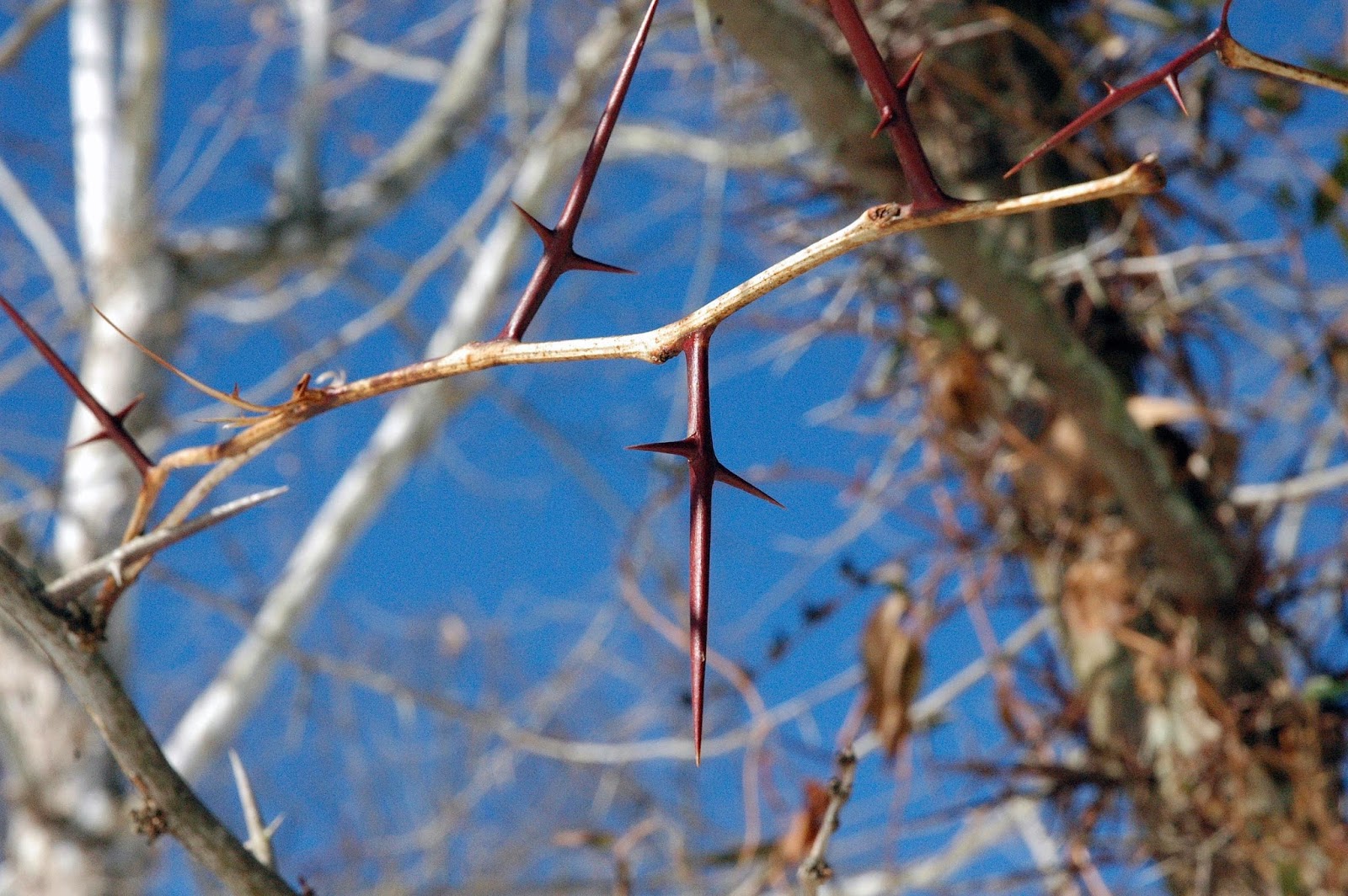 I tell students to remember the latin name tri-acanthos by looking at the young thorns, they are branched into threes. They start out looking purple-red, and darken with age. I've also told students the thorns are toxic.

My choice of words may be misleading. They don't contain a liquid toxin or poison. The thorns may be covered in dirt or bacteria. These thorns are longer and more rigid than any of the other species mentioned. So when they pierce the skin, the wound is larger and deeper. It not only affects the skin, but can irritate the nerves. Major swelling can occur and last a week. Anti-inflammatories may be needed. 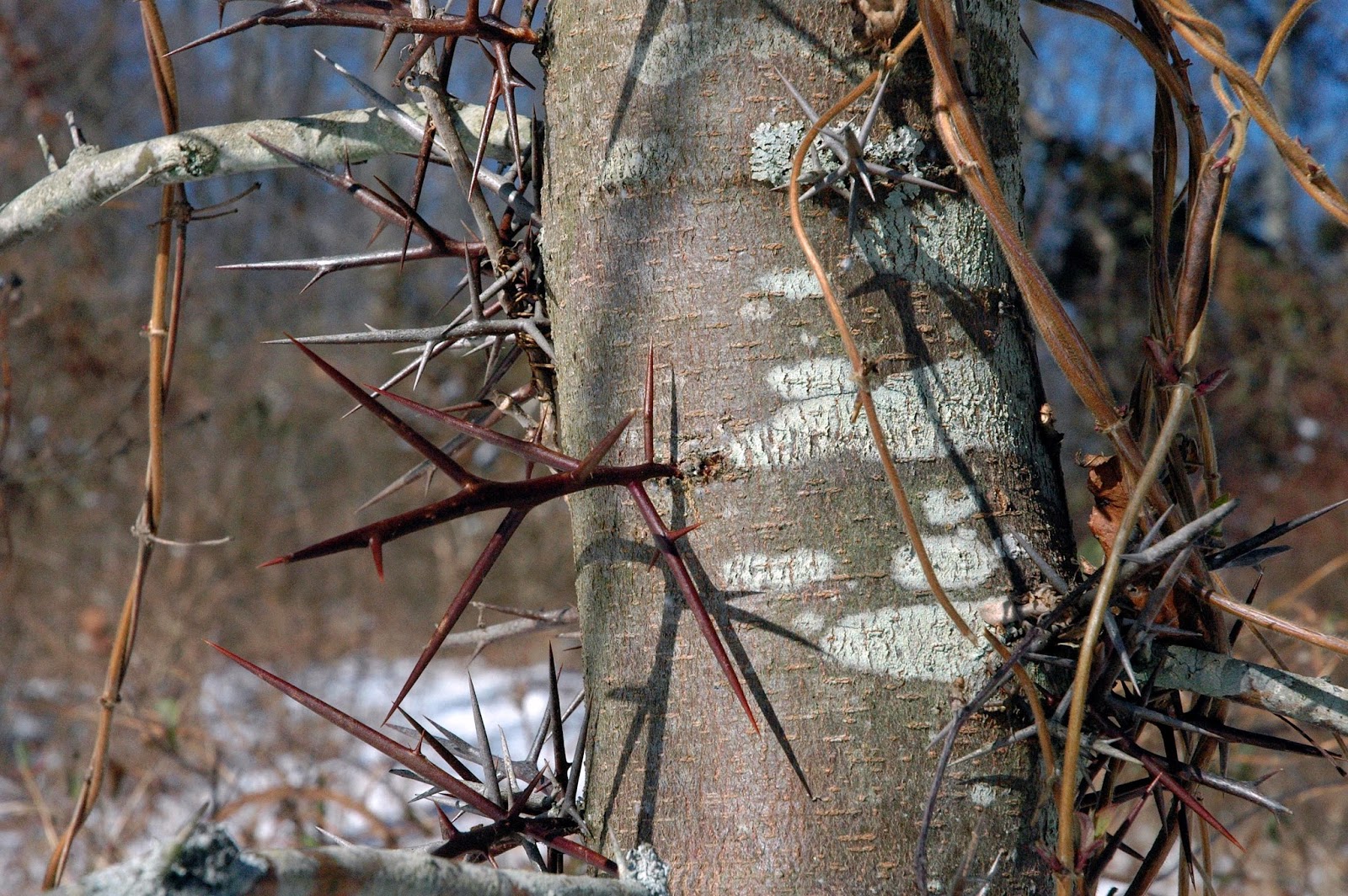 Honey Locust thorns have been used historically as sewing needles and fish hooks. The pea pods are sweet and edible when they first come out, not so later in the season. Black Locust pods on the other hand ARE poisonous. Don't eat those. At the risk of bursting your bubble again, Honey Locust thorns are not thorns at all, but spines.
Posted by DenPro at 5:49 PM