Plants And Insects During June 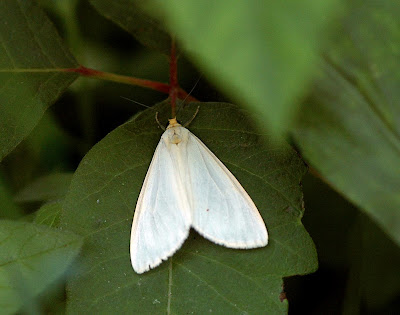 The Dogbane Tiger Moth Cycnia tenera, is a commonly seen species. Not only abundant, but I say commonly seen because it flies during the day. Many Tiger Moths are diurnal because they contain chemicals predators find distasteful. There are many similar white moths out there, but the Dogbane Tiger is recognized by the yellow head and a thin yellow line on the outside edge of the wings. 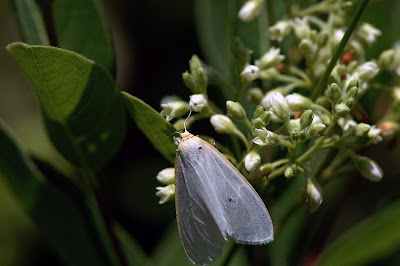 The very same plant the caterpillar feeds on, Dogbane, Apocynum, we also see the adult nectaring on the flowers.

Many of us have probably seen Bagworms hanging from conifer trees and shrubs, but how often do you see this little guy? This is one of the small Bagworms known as Psyche casta. After feeding it will close its bag and pupate, either on a plant or the side of a building.


Sneaking up on Hairstreak butterflies is not easy. Their flight is erratic and very rapid. Although they don't fly far, it is very easy to lose sight of them. This is the Banded Hairstreak, Satyrium calanus. The butterfly is dark gray, and the spots in the middle of the top wing form a solid band, bordered by white on ONE side.

Edward's Hairstreak (which I hoped this might be), is similar, but light gray, and the spots are oval and separated from each other. Plus they are bordered by white on BOTH sides. With the exception of a few central Ohio counties, Edwards is rare and restricted to prairie areas in southern Ohio, especially around Adams and Scioto counties, and the Oak Openings near Toledo. 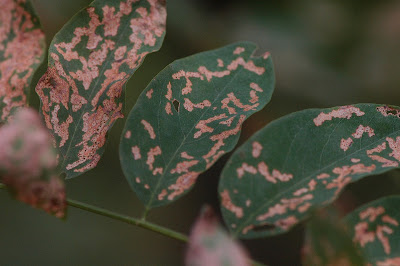 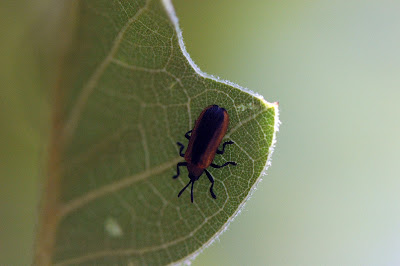 Last year I posted pictures of Black Locust trees whose leaves were all chewed up. Recently I was able to get one shot of the guilty party before it flew. This is the Locust Leaf Miner, Odontota dorsalis. It's a rather flat orange beetle, with a large black streak down the back. It may not be noticeable yet, but come July and August, don't be surprised to see Black Locust trees all turning brown due to the feeding habits of this beetle. 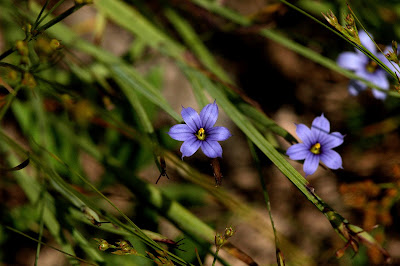 Always a pleasant sight in late spring and early summer is the Blue-eyed Grass. There are several species common in open fields.


Growing in our prairie is the Small Sundrops, Oenothera perennis. It's a member of the Evening Primrose family. One thing I often notice with this family, the lower leaves often turn red. Small Sundrops have very pubescent flower stalks and seed capsules. The flowers tend to bloom in a narrow spike.

Looking very similar is the Large or Southern Sundrops, Oenothera fruticosa. The plant grows at least a foot higher than the previous, and the petals are 2-3 times wider. Small Sundrops tend to flower one bloom at a time along a raceme or spike. Large Sundrops usually blooms with its flowers all located terminally. 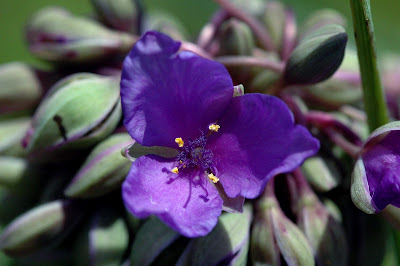 When managing prairies, you usually have to wait till mid July or August to see most species in bloom. If you diversify your site, you can see late spring, early summer species like Blue and White False Indigo, and these beauties, the Spiderworts or Tradescantia. The sepals and flower stalks on this were hairless, so rather than Virginia Spiderwort, it's most likely Ohio Spiderwort.


Blooming throughout June is the native Carolina or Wild Rose, Rosa carolina. It can be separated from our other native pink roses by its small size (1-3 feet), needle like thorns, and the dry habitat it requires. 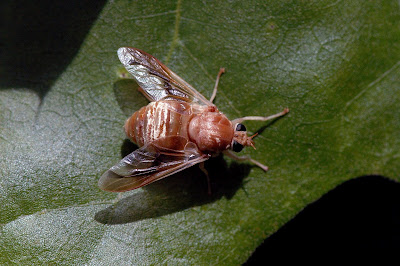 This odd looking fly is related to something that may surprise you. The markings in the wings may give you a hint. It's Goniops chrysocoma, a Tabanid Fly. That includes the annoying Deer and Horse Flies. This guy tends to hang around forests and forest edges rather than flying in the open. I have never had this species buzz my head, let alone bite. In my experience, it's a rather docile and slow flying species.

Growing along the edges of dry woods is the Whorled Loosestrife, Lysimachia quadrifolia. Easy to recognize by the whorled leaves and long stalked flowers. The petals are yellow with a red circle down in the center. 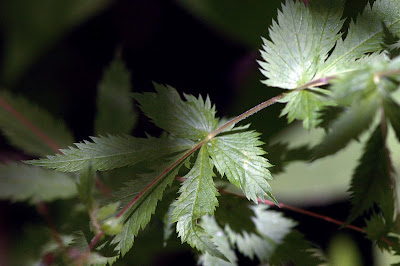 The single 5-petaled flowers, even in full bloom, are not very uniform. They remind me of Serviceberry. That's not a far reach since both are in the same family, Roseaceae. This is American Ipecac, Gillenia stipulata. The divided leaves are heavily serrate and clasp the stem. I find this plant in dry woodlands. The Wild Ipecac has a long history of medicinal value among Native Americans. 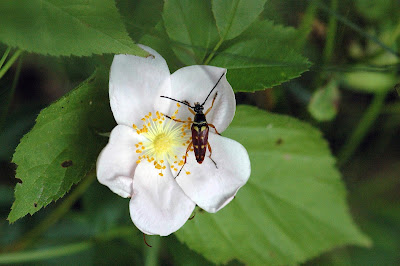 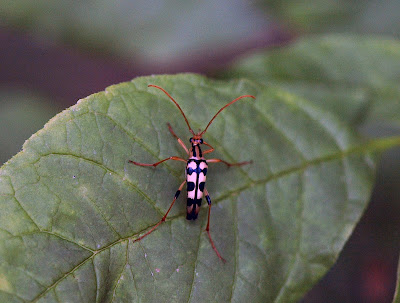 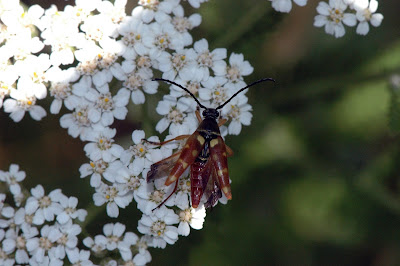 Here are a couple of Long-horned Beetles. They differ from most members of the family in being smaller and skinnier, having shorter antennae, and occur during the day. These beetles spend their time feeding on flower heads rather than boring into wood.

The Gomphidae family are the toughest dragonflies for me to figure out because not all Clubtails actually have an expanded club tail. I found this in Mahoning County, and it was a new species for me. Although it's been found in the county before, there are only two known records, and one of those is 55 years old. This is the Unicorn Clubtail, Arigomphus villosipes. The striped thorax, yellow abdominal tip, and the 'bomb' shapes along the body are what I used. Thanks to Bob Glotzhober for verifying my I.D. and letting me know about the records.

There was a time I used to "stun" dragonflies and pose them to photograph. I don't need to do that anymore. I simply use my inner chi and Kung-Fu training to sneak up on them. Ya, I am so sure. Seriously though, the secret is simple, patience. It's not that tough. Just stretch and loosen up first before going to the field. At my age, freezing in one position for very long is a workout!
Posted by DenPro at 2:15 AM