In my last couple of hikes I've tried to photograph some spiders and relatives. Not being a spider man, I have to search a lot harder to try and find names for these. This is a Green Crab Spider, and a very small one at that. Crab Spiders usually hold their front two pair of legs outstretched the way a crab holds its pinchers. Most of the time you can find Crab Spiders hidden in various flower heads. This one was sitting in the woods on an oak leaf. I believe this species is Misumessus oblongus.

Jumping Spiders are so named because they will hop short distances when disturbed or when pouncing on prey. Many are small and have some of the most intricate mating behaviors of all spiders. While many spiders tend to move away when provoked, Jumping Spiders often turn to face their adversary. The markings on the abdomen tells me this is the Golden or Emerald Jumping Spider, Paraphidippus aurantius. They are common in Ohio.

Those bristly pedipalps around the mouth are typical of Jumping Spiders. They make up one of the largest of all spider families with maybe 5,000 species worldwide. The arrangement of the eyes, and the rectangular head are also characteristic of this family.

Whenever I see spiders like this, I immediately think Wolf Spider. In this case, I don't think so. I believe this is another Nursery Wed Spider, Pisaurina mira. Nursery Web and Wolf Spiders are easily mixed up. This spider usually makes small webs under curled leaves. 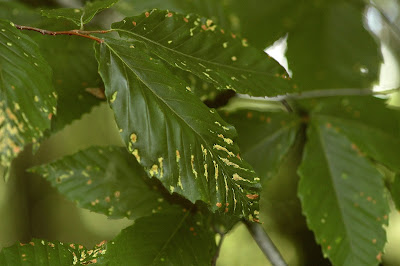 This leaf has not been chewed by a spider or insect, but instead marked up by the Beech Mite, Acalithus fagerinea. Mites are 8-legged spider relatives. Some are microscopic in size. Many are responsible for galls on leaves.

I've posted a few Harvestmen before, the Daddy-longleg relatives of spiders. Many look alike, but I still try to get them to the species level. This one looks like Leiobunum ventricosum.

The white ringed coxa and orange mouthparts are what I use to narrow it down to this species. If you enlarge the picture and look at those mouthparts, it reminds me exactly of the alien in the movie Predator.  "Run, get to the chopa"!!! 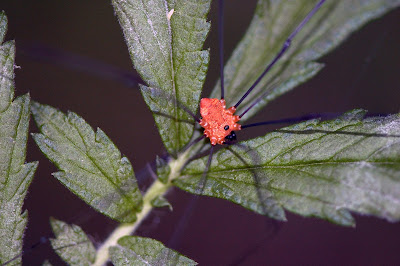 Here is another orange bodied, black legged species. Same one? I can't be sure, but the pedipalps on this one are black. There is a species that matches, with a name that reflects that character, Leiobunum nigropalpi. Most daddy-longlegs don't have common names.
Posted by DenPro at 11:45 PM