It's wildflower season again, so I thought I'd put up a few pictures of species we don't see much of in Ohio, and some of these never occur this far south. Most were taken on Beaver Island where I spent several summers teaching for CMU. I haven't been up there in years, so maybe this summer I'll need a road trip. These were taken with a Nikon Coolpix, long before I had the 'good' camera. 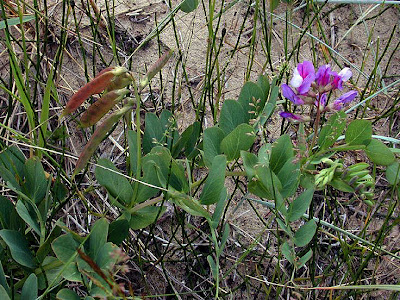 Being an island, Beaver offers up a lot of interesting sand dune species. This is Beach Pea, Lathyrus japonicus. It's found worldwide on shorelines, and is common in Michigan. 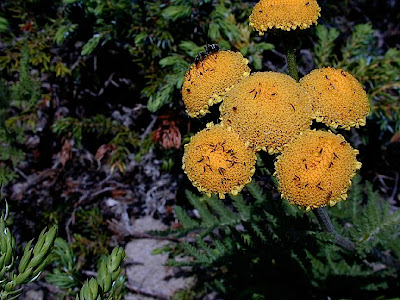 Unlike the previous common plant, this species is considered state threatened. This is Beach or Huron Tansy, Tanacetum huronense. A member of the Aster family, it's highly divided leaves remind one more of Yarrow, Queen Anne's Lace, or some other Apiaceae. The flower heads are large, but the light yellow rays are so reduced in size to be almost non-existant. It has a wide range in Canada and the U.S., but is restricted in Michigan to the extreme northern counties. 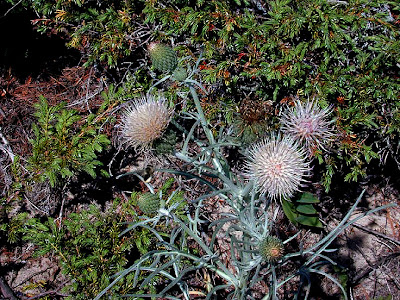 Another threatened species in the state is Cirsium pitcheri, Pitcher's Thistle. The blue gray leaves are covered in soft wooly hairs. The flower is white or cream colored. It is restricted to the shoreline of Lake Michigan and Lake Huron. 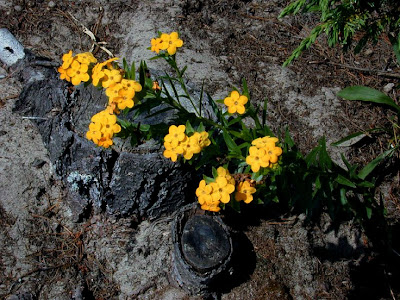 Another common dune plant is often called the Hoary Puccoon, but that plant is found more commonly inland. The shoreline species found in sand is actually the Hairy Puccoon, Lithospermum caroliniense. 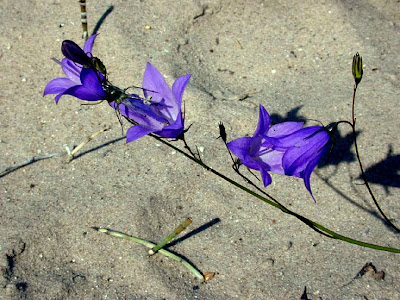 This attractive bell shaped flower is the Harebell. Another dune plant, it has very small stems. So thin in fact, the plant commonly leans or falls over in the sand. It's easy enough to identify, but breaking the stems will result in the dripping of a milky sap. 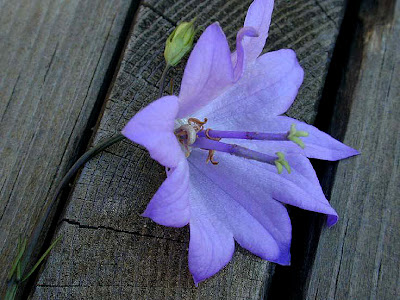 Here's an interesting variation. Normally five petaled, this one is doubled, and instead of one style, there are two in the center. Polyploid??

Blue and attractive like Harebell, but this is a non native plant. Called Blueweed or Viper's Bugloss, Echium vulgare, it reaches 3 feet in height, and can be found in any disturbed or empty field. 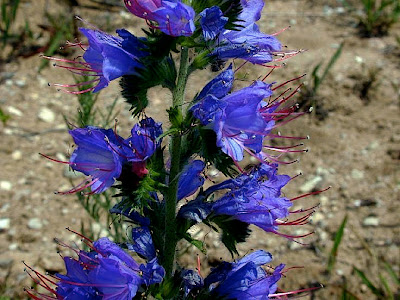 Red stamens protrude out far from the petals, but don't try and grab this plant. The stem is covered in stiff stinging hairs. So much for another invasive. I have found this spreading in Ohio. 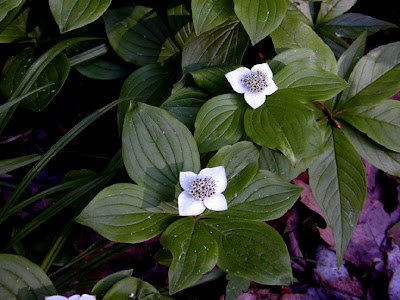 This looks like a dwarf Flowering Dogwood. Well you're close. It is in the Dogwood family, but unlike the woody tree and shrub members, this is herbaceous. It's known as Bunchberry, Cornus canadensis. The leaves are deeply veined like other Cornus members. The four white petals are actually bracts. The small flowers are in the center, and are barely over one or two millimeters in length. 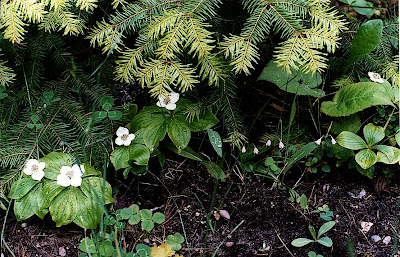 Bunchberry prefers moist to wet soils and is boreal in nature. It grows under trees and forms clonal colonies. 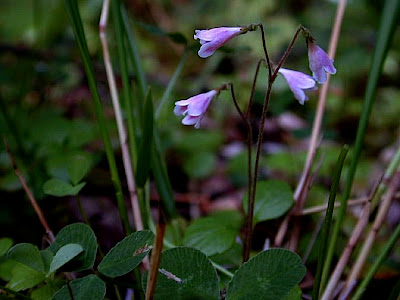 Common in conifer forests and acid soils is Twinflower, Linnaea borealis. It has pink bell shaped flowers. The plant is small and often overlooked. The leaves are round, opposite, and evergreen. It's a member of the Honeysuckle family. Like Bunchberry, it forms mats and spreads with creeping stems. Native American Indians once derived a tea from the plant. 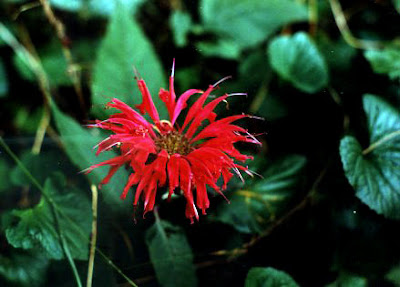 Speaking of using plants for tea, this is Oswego Tea, Monarda didyma. Sometimes called Bee-balm, it's related to the more common purple flowered Wild Bergamot. Native Americans and pioneers both used this plant to brew a tea. It also has antiseptic qualities. This is commonly planted in gardens, but it is native in Michigan. 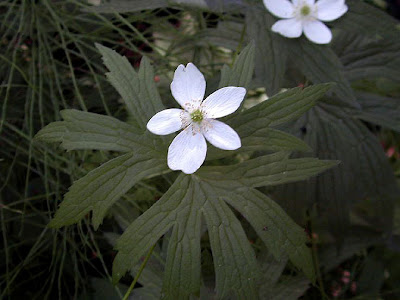 Common throughout the state is Anemone canadensis, the Canada Anemone. It looks similar to a species we see a lot around Ohio known as Thimbleweed A. virginiana. The fruit of Thimbleweed forms a club like head, but on Canada Anemone, the fruit looks like a spiked ball. The broad divided leaves resemble that of Wild Geraniums, yet Anemones are in the Buttercup family.

Bottle Gentian, Gentiana andrewsii. Sometimes called Closed Gentian because the petals on this group do not open. No problem for bumblebees, they can get inside and help in pollination. Leaves are stalkless and crowed up against the flowers.

Here is one I took a long time ago. It's a Fringed Gentian. These are Gentians whose petals do open up and look frayed on the edges. Not having seen a lot of these species, I wasn't sure which it might be. With the fringes not very prominent, and the smaller leaves, I was told this is Gentian procera, the Lesser or Small Fringed Gentian.  I'll take comments and opinions. 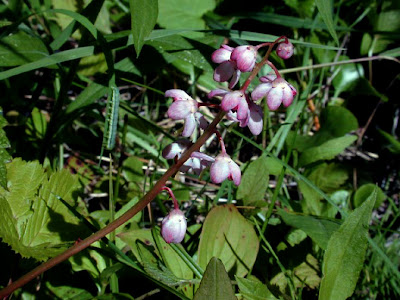 Pyrolas are small plants of forest understories. Most have white flowers and go by the name of Shinleaf. This is the Pink Pyrola, Pyrola asarifolia. It is common in the northern parts of the lower peninsula. Pyrolas have been classified in their own family, and sometimes as part of the Ericaceae (blueberry family). 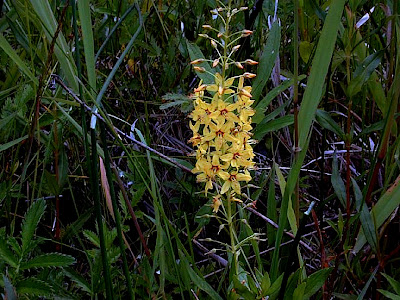 Growing in swamps and wetlands, some people refer to this as Bog Loosestrife. The species is better known as Swamp Candles, Lysimachia terrestris. Yellow star shaped flowers grow in an elongated raceme. The petal bases are dotted and form a red circle in the center. 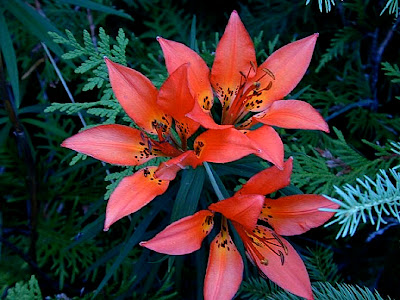 Another favorite of mine is the Wood Lily, Lilium philadelphicum. This is an upright flowering species, as many other orange-red lilies have the flowers pointed downward. Just under the flowers are long whorled leaves. The six petals are narrowed at the base and dark spotted. Actually there are 3 petals and 3 identical sepals. Put together, these are usually referred to as tepals. Wood Lily is only scattered among counties in lower Michigan, but more common in the northern regions.

We can't do a post on Michigan flowers without including a few orchids. This is a white flowering species whose lower lip points straight down. This is the Large Round-leaved Orchid. Platanthera macrophylla or P. orbiculata, depending on if you lump or spilt. It was identified for me as the Large. If that is the case, it is extremely rare in Michigan, being found in only a few counties.  Two of those counties surround the area this was photographed. The length of the spur is used to separate the two, but many botanists find that arbitrary. Sphinx moths and Noctuid moths are the primary pollinators.

On a side note, there is another white flowered orchid in Michigan known as the Broad-leaved Orchid, Epipactis helleborine. It is non native and considered invasive. An exotic invasive orchid?  What has the world come to.

Wish I had a better photo of this. Hidden along some of the woodland seeps is one of my favorites, the Purple Fringed Orchid. It has been so long since I've seen this in bloom, I can't be sure if it is psycodes or grandiflora, though I lean to the latter. 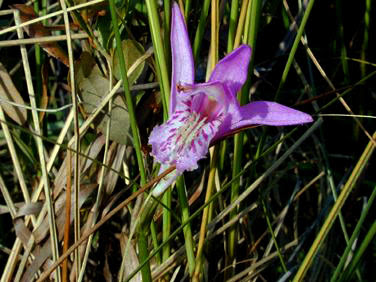 The bogs are full of orchid species. This is the Dragon's Mouth, Arethusa bulbosa. The sepals and hood are solid pink. The lower lip is spotted with purple, white, and yellow. 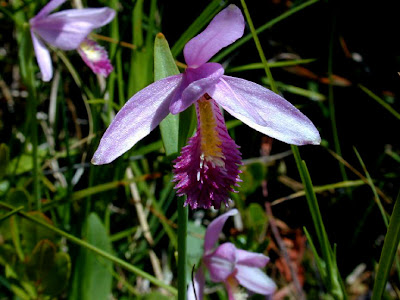 Rose Pogonia, Pogonia ophioglossoides, is a wide ranging species, occurring throughout the eastern half of North America. It looks similar to the Dragon's Mouth, but is much lighter pink or 'rose' in color. The lower lip is darker, fringed, and has a deep yellow throat. 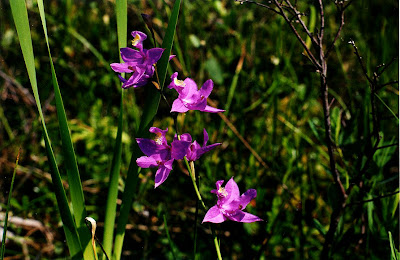 One of the most abundant orchids on Beaver Island bogs is the Grass Pink, Calopogon tuberosus. The color is much deeper and richer than the previous two. Red and purple pigments really make this plant stand out from the rest. 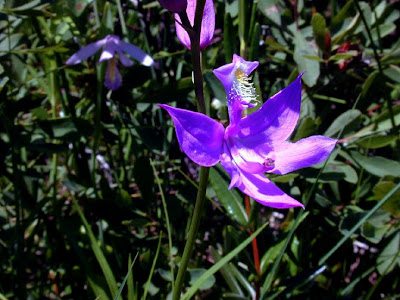 Think of this as the upside down orchid. The center lip is inverted in this species. Look for long protruding white or yellowish hairs on the lips beard. This lip bends down and touches the back of bumblebees to insure pollination. 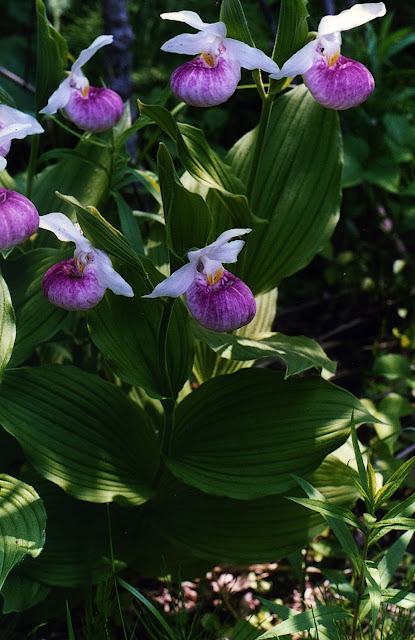 Ah, saving the best for last. While I've seen plenty of Yellow and Pink Lady's Slipper, with a few exceptions, you need to be in the Lake Erie counties to find this in Ohio. This is Showy Lady's Slipper, Cypripedium reginae. The large broad leaves make this easy to spot, even when not in bloom.  Don't restrict yourself to looking in bogs, Showy prefers a higher pH soil. On Beaver Island we find it common in any wet ditch.
Posted by DenPro at 1:53 PM