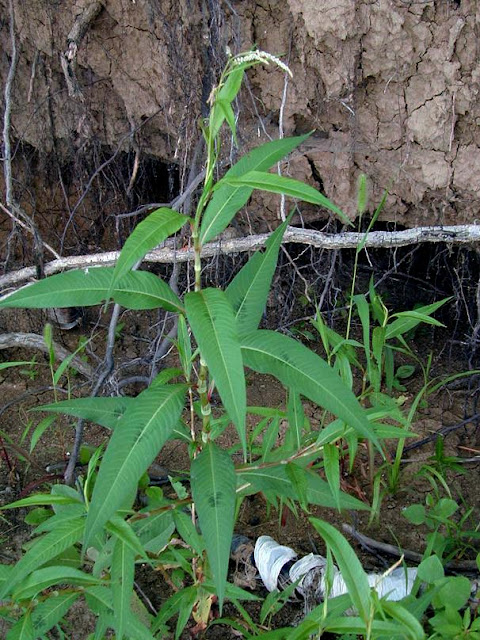 I'd rather be a smart-weed than a dumb-flower. I really didn't just say that did I? Smartweeds are mostly aquatic plants preferring wet or at least  moist soils. Flowers are small and five petaled, but without a hand lens appear non-descript. They range from white to red, with many being pink. They are members of the Buckwheat family. Most are in the genus Polygonum. The genus can be recognized by the swollen joints or nodes. The joints are surrounded by clear or opaque sheaths known as ocrea. Examining these is often necessary for correct species identification. 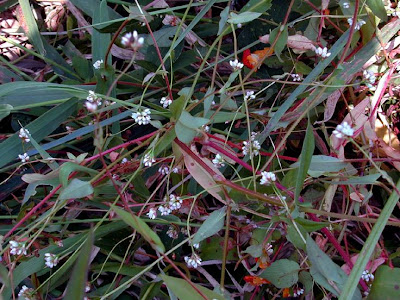 Creeping along wet fields is the Arrow-leaved Tearthumb, Polygonum sagittatum. Although low growing, it will attach itself to other plants in order to climb. It has sharp hooks on the stem that allow it to grasp on to plant stems. If you make the mistake of wearing short pants, it will "tear" into your skin. The other part of the name comes from the arrowhead shaped leaves which clasp the stem. 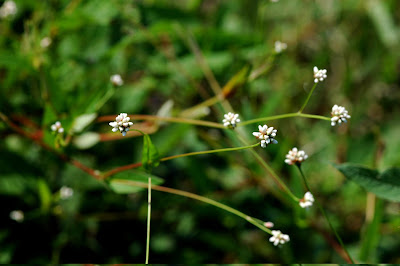 This Smartweed does not have elongated flowers like the others, but can be recognized by the compact rounded heads. The flowers will be either white or pinkish red.


Swamp Smartweed, Polygonum amphibium, is one of the showier pink species in the group. Look for it growing in ponds and marshes. The leaves are broad, large, and leathery in appearance. Leaves often have a glossy look. This and many other smartweeds are important foods for waterfowl. Both of these were shot in the same place, but the second picture was a plant growing on the edge, not in the water. Though variable, edge plants often show a more elongated flower head, and less shiny leaves than those directly in the water.

These dark egg-shaped leaves belong to Virginia Knotweed, Polygonum virginianum. It's also known as Jumpseed or Tovara. The leaves may or may not show dark spots on the surface. This plant does quite well in forest understories with just moist soils. Petals and sepals are fused into very small 4 part tepals. Flowers are on extremely long and thin stems. 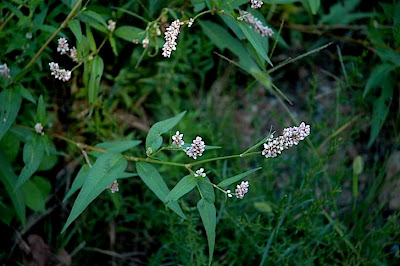 Here is the more typical look of Smartweeds, or at least the more difficult ones. This is Ladysthumb, Polygonum persicaria. Flowers can be light or dark pink, and tightly clustered in terminal heads. This is a non-native invasive species. It's sometimes listed as Persicaria maculosa. 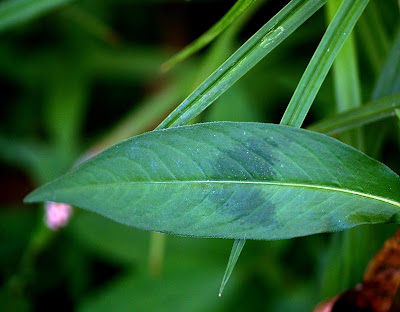 Many field guides discuss the thumb print feature as a key character to look for. Unfortunately, the more Smartweeds you look at, the more you realize the dark marks are not unique to any one species. 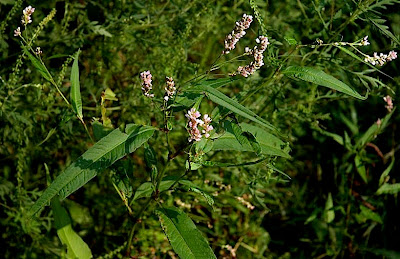 One of those "look-a-likes" is the Waterpepper or Pennsylvania Smartweed, Polygonum pensylvanicum. You could argue that the leaves of this species are more elongate, and that when and if it has a thumb print, that the mark is broken up and less uniform than Ladysthumb. Because there are several varieties of this species, I wouldn't waste my time. The important difference is in the sheath. Ladysthumb sheaths are tipped with hairs or cilia. Waterpepper sheaths lack these hairs. Stems are also gland tipped and appear hairy. 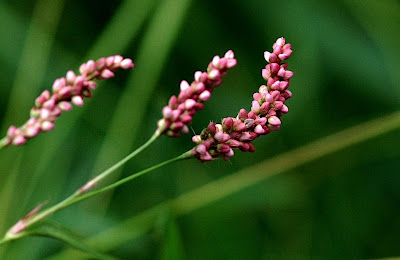 Oriental Ladysthumb, Polygonum cespitosum (Persicaria longiseta), is another introduced species. What usually catches my eye is the bright pinkish red color. Flowers may look full and compact, or small and loosely spreading. It's sometimes called Tufted Smartweed, but I prefer the common name Long-bristled Smartweed.

This is another species that can show dark spots on the leaves. One of the things I look for are the very very thin terminal stems that hold the flowers. 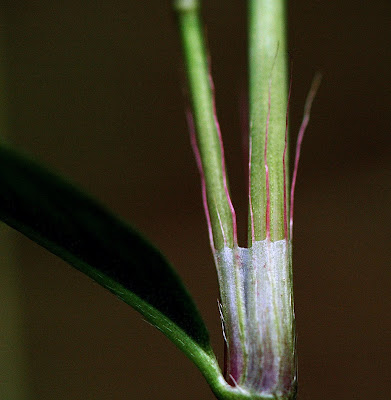 Most important again is the sheath. The hairs on this are longer than any of the Smartweeds I've come across. Being an exotic, it has no problem colonizing any disturbed ground capable of holding water.

Forming large mats in wet bottomlands is the Mild Waterpepper, Polygonum hydropiperoides. These can dominate in mudflats or ponds with low water levels.


I usually see this species blooming white, but it can occur in pinkish forms. We all have little things we notice, and while not exclusive, I tend to see Black Willow like leaves on this species. This is another one whose flowers are tepals. This plant grows erect, but weakly. The blooms appear loose or with spaces between the flowers, as if interrupted. The sheath does contain small thin hairs.

The last species (for now) is a large or rather robust plant reaching several feet in height. The flowers are heavily compacted and apparently never fully open. They are white to pale pink and tend to droop. This is Nodding Smartweed, Polygonum lapathifolium. It's widespread and perhaps the most common one I come across.

Above the swollen white node, the sheath will look brown to red. It is striated, but ends abruptly, and will not show any hairs, cilia, or bristles. The stems are smooth. The leaves may be solid green, or like others, show a dark V in the middle.
Posted by DenPro at 8:24 PM