Sometimes I hesitate to put up posts on topics where I don't illustrate every single species. This is especially true with the insects. If I waited till I had photos of every species of a genus, I'd never post anything. I also worry about posting out of season material. Based on all the verbal comments I've received lately from people I run into, they like my format. So I'll go out there and do, continue to do, the voodoo that I do so well.

Lespedeza are members of the Fabaceae family, or the pea and bean family. The common names are listed either as Bush Clovers, Bushclover, or Bush-clover, depending on who you read. I tend to hyphenate them. Some are native to dry soils and prairies, but many species have been introduced for gardening, forage crops, or as wildlife food plants.

Bush-clovers all have leaflets in threes. This is one of the prairie species, Round-headed Bush-clover, Lespedeza capitata.  The leaves often have a shine like these above. Multiple flowers are clustered in large round heads, primarily at the top of the plant, giving it a spike like form.

Flowers are white, with a pinkish-red spot on the larger petal. If you are doing prairie restoration, this is an easy plant to establish. 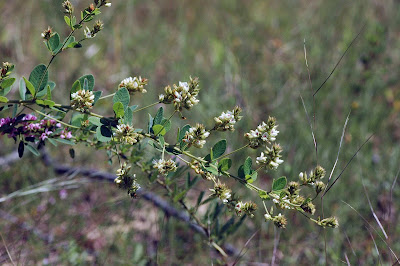 Another white and pink species is Lespedeza hirta, the Hairy Bush-clover. It's common in open fields and along oak woods. All parts of the plant are covered in soft white hairs. Round-headed (above) has all the flowers clustered in tightly packed heads. Hairy Bush-clover has the flowers on long stems or peduncles, giving the appearance of more spread out flowers. 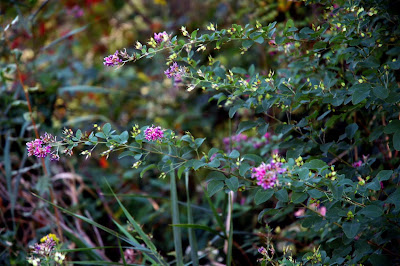 This is one of the larger species that grows as a shrub.  I have found this on wildlife areas as a planted crop. The flowers are almost completely pink. They occur throughout the plant on long racemes. Leaves are green on top and paler below. So what is this? I believe it to be Lespedeza bicolor, the Japanese Bush-clover. Obviously an introduced species.
For the longest time I thought it was L. thunbergii, the Pink Bush-clover. The two are very similar. Japanese Bush-clover has rounded leaves, and flowers that grow erect on ascending stalks. Thunberg Clover has narrower leaves and flower heads that droop. Published floras from this exact location list only bicolor. These are popular ornamentals, and there are many varieties of each. 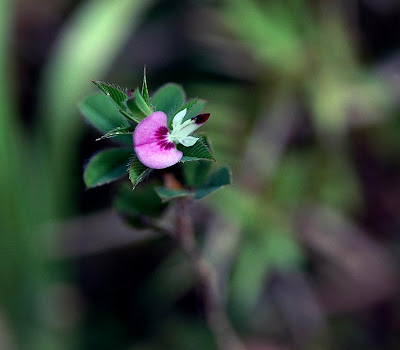 This is Lespedeza stipulacea, the Korean Bush-clover. Like many bush-clovers, the leaves are short, round, and end in a pointed or mucronate tip. The large petal is pink to purple-red, and the smaller 3 lobes are white, tipped in maroon. Without the flower, these small species could be mistaken for Medic or Hop-clovers. 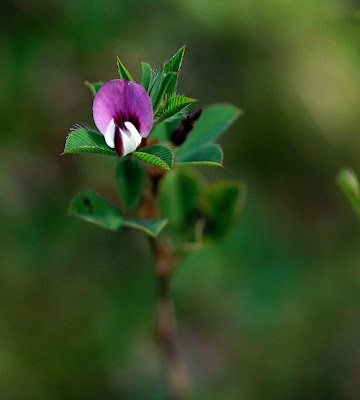 Korean is a small but showy plant. It is sometimes known as Kummerowia. A distinguishing feature are the long fine hairs on the stem and the leaf edge (a ciliate margin). On the nearly identical looking L. striata, another Japanese species, the hairs are appressed up against the leaf margin and they point downward on the stem. 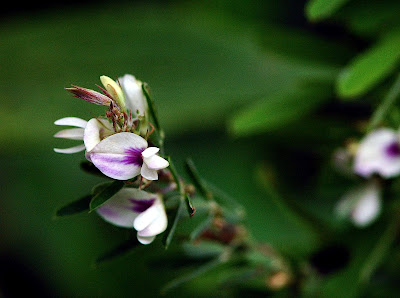 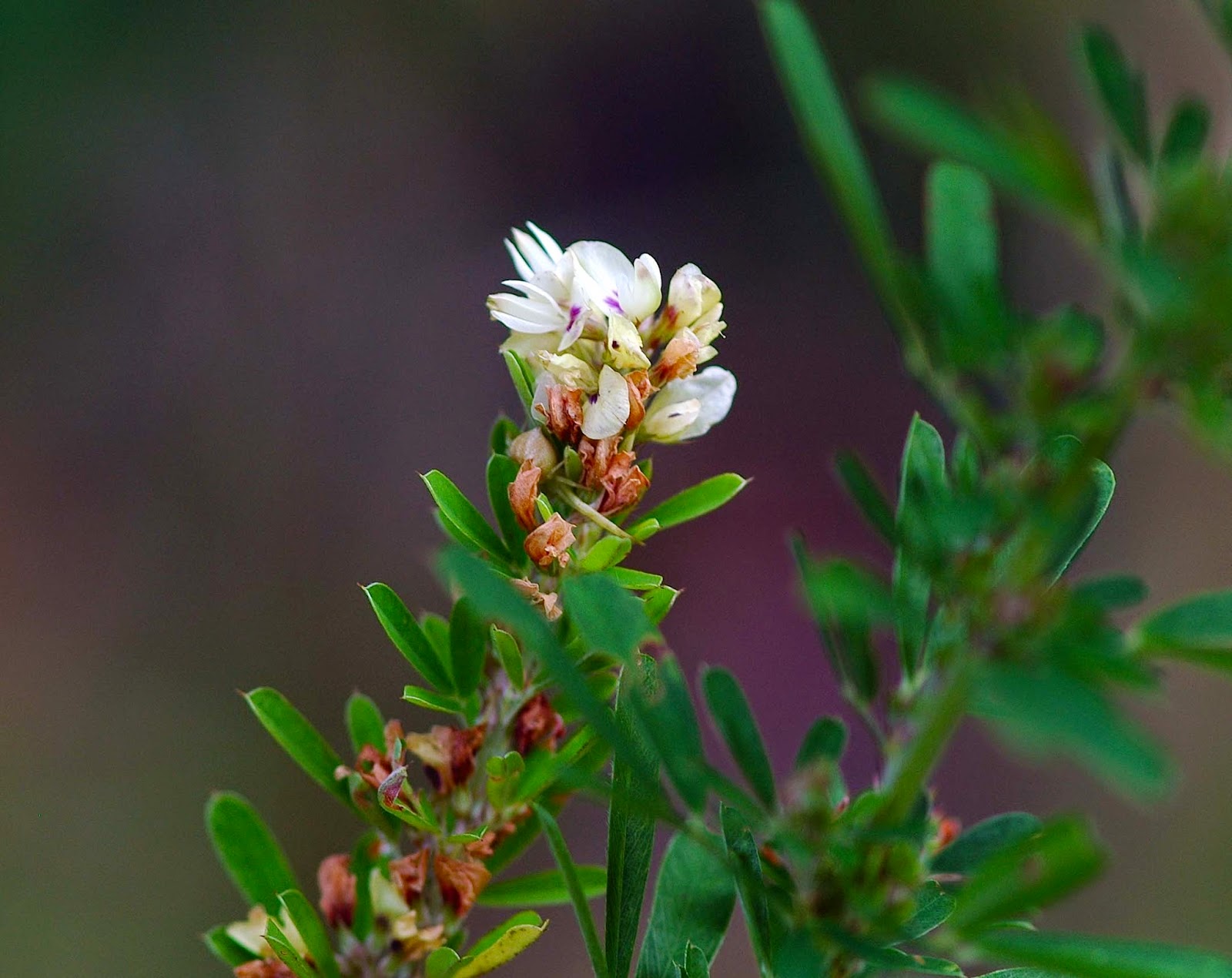 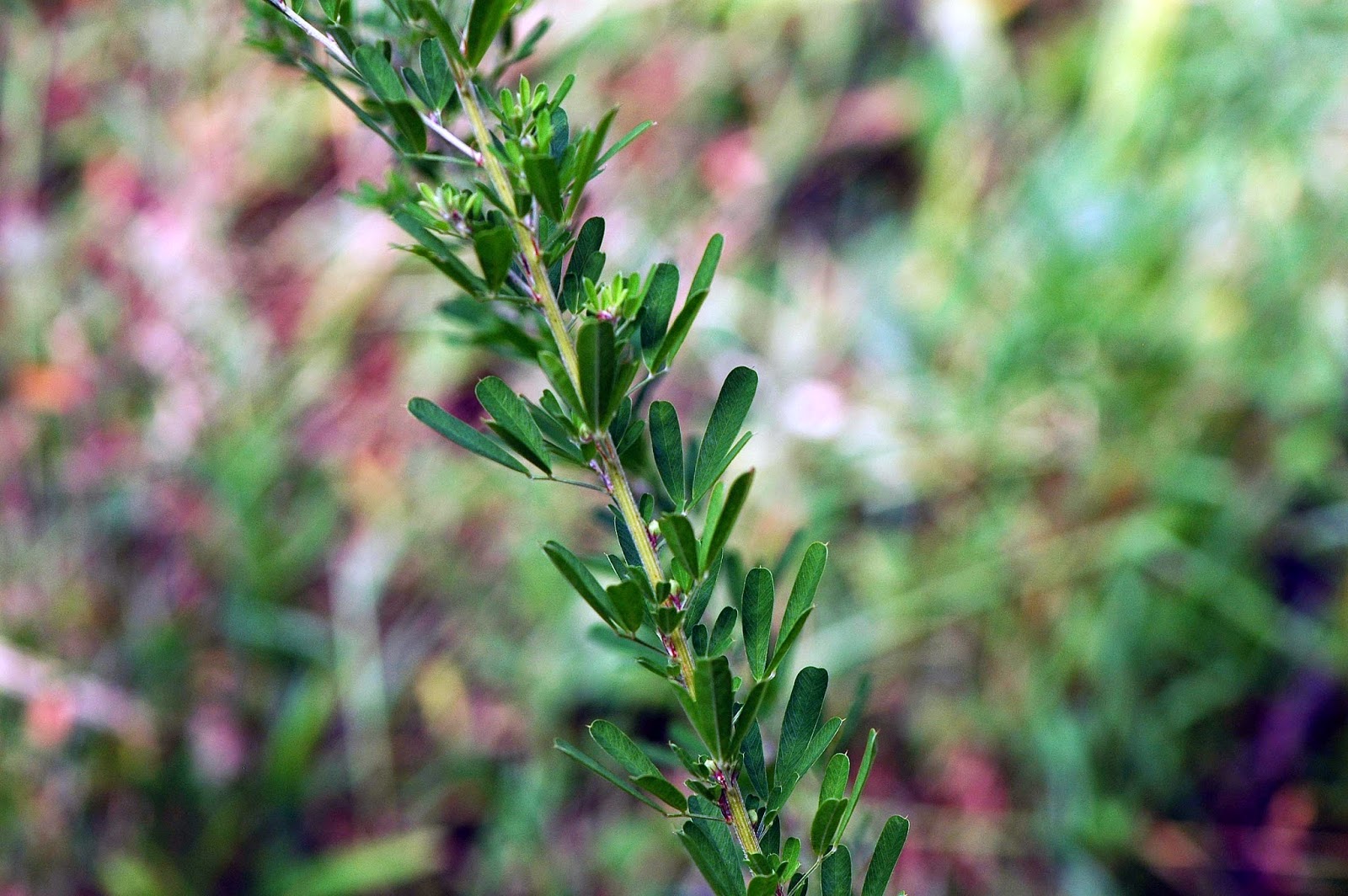 I was stumped for awhile. Checking a lot of references, I finally came up with a name. Just a few hours later, Scott Namestnik sent me his determination, and the name was the same. This is Lespedeza cuneata, the Sericea or Chinese Bush-clover. It is one of the white flowering species. The colored blotch is purple not pink. The leaves are wedge shaped and end in a fine tip.

So is this another one of those posts, the more you read, the more you get confused? Don't worry, it gets worse. Here is a pink species whose red spot 'bleeds' through the entire flower. Could this be the Wand-like Bush-clover, if so, which. I narrowed it down to either Lespedeza intermedia or L. violacea. 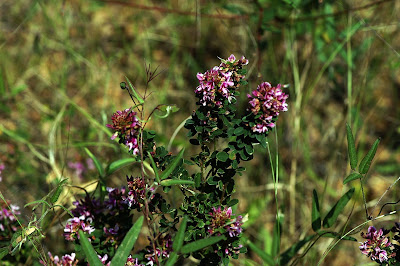 In the older keys it says violacea has loose flower heads that spread way out past the leaves. With intermedia, the flower heads are more compact, and don't extend much past the leaves. Well, what do updated sources on the internet have to say? Apparently they are now *sigh* synonymous! Look at the bright side, it's native. It's common on the edge of our prairie in the thick clay waste soils. 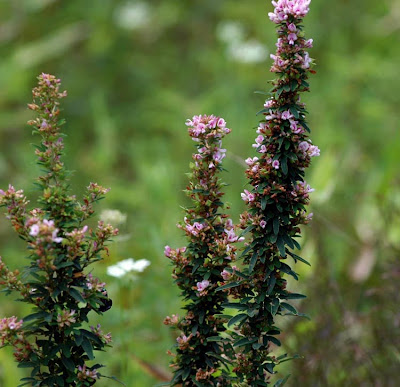 Oh no, more? But it looks just like the last one. Ah, check out the leaves. They are not short and round, but long and thin. To me they look more Desmodium like. This is Lespedeza virginica, the Narrow-leaved or Slender Bush Clover. It's native. All of these species are nitrogen fixers. The introduced species have also been used for soil erosion, mine reclamation, and hay production. The non-natives have invasive tendencies. As always, corrections and discussion on ID's are welcome.
Posted by DenPro at 7:50 PM