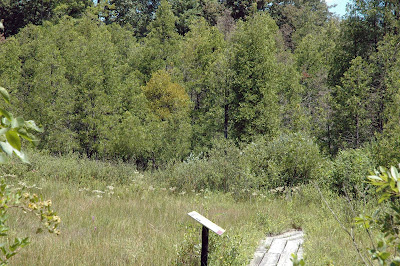 I recently visited Cedar Bog just outside of Urbana Ohio. The so called 'bog' is actually a fen. In simple terms, a bog is an acid lake with stagnant water. A fen is more alkaline with constant running water. Different vegetation zones occur in these spots such as marl flats, sedge meadows, prairie fens, and bottomland hardwood forests.  Several prairie grasses and flowers, usually more common in dry sites, but are tolerant of these soil types, can be found here. Enlarging the picture, you can see the Spiked Blazing Star, Liatris spicata, just beginning to pop out behind the sign.

Jim McCormac of the Division of Wildlife, was our program leader for the day. I am so glad he gave a talk on fen plants before we went out. With three dozen people on the single file boardwalk, there was no way I could here everything he was talking about. So I lingered in the back, patiently waiting till I saw many of the plants in his presentation. One of those was this Bog Birch, or what I know as Dwarf Birch, Betula pumila.

Dwarf Birch is exactly that, a birch tree that grows small like a shrub. The leaves are round to spatula shaped and heavily serrated. You can see the areas namesake plant in the background, White Cedar, Thuja occidentals. 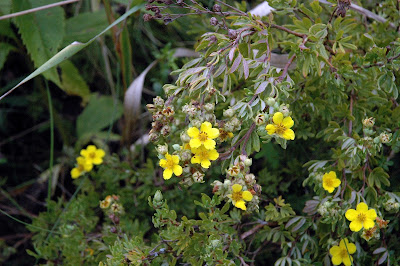 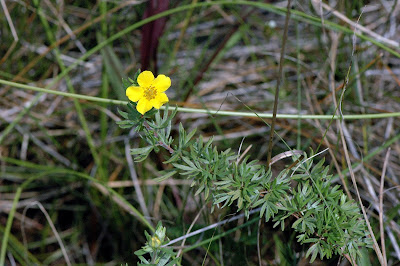 At the opposite end of the spectrum is this Cinquefoil. Most of its relatives are small herbaceous plants. This is Shrubby Cinquefoil, Potentilla fruticosa. Because of its woody nature, you'll often see the name listed as Pentaphylloides floribunda. This plant will reach 3-4 foot in height. 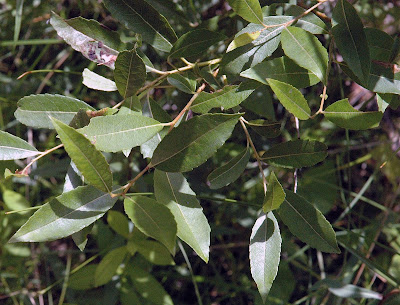 Pussy Willow, Salix discolor, is a common species on the area. Their leaves are wider than many other willows, and the margins have large serrations. After seeing a lot of it, you may just start to ignore it. Watch closely, as there are other, more uncommon species mixed in. 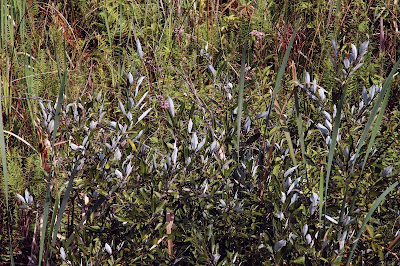 Blue-leaved Willow, Salix myricoides, is one of those rare species in Ohio. Also called Bayberry Willow, and listed in older texts as S. glaucophylloides. The glauca name coming from the bluish-white undersides of the leaves. The leaf margins are more finely serrate then Pussy Willow, and the surface has a smooth, more shiny appearance. 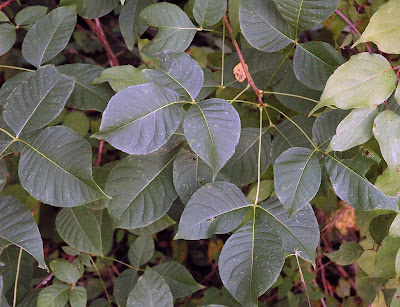 In the forested edges, you may find a three-leaved tree that looks very much like Poison Ivy. The fact that it's a tree will remedy your worry, but small saplings like this may still fool you. It's called Hoptree or Wafer-ash, Ptelea trifoliata. The fruit look similar to those on Elm trees. Round wafers that are flying saucer shaped. 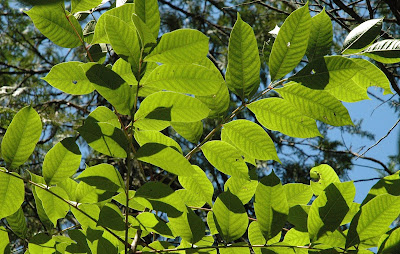 Hoptree may look like Poison Ivy, but there is no rash it can give you. This plant on the other hand is one you want to avoid at all costs! Poison Sumac, Toxicodendron vernix. It can reach 20 feet in height. That means your head or face can easily brush up against it where it grows along a trail. Due to the many leaflets on each stem, people might mistake it for an Ash. 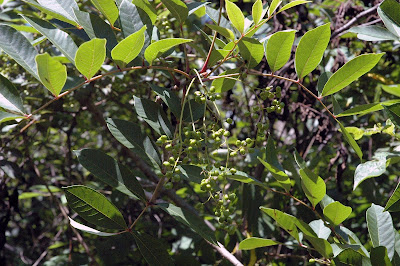 One of the easiest ways to identify it is by the fruit. These green berries will eventually turn white, and look just like Poison Ivy fruit. The key feature is they droop down beneath the leaves. As with Poison Ivy, probably 10-20% of the population is immune. Don't take my word for it, but listen to other peoples stories, and they are not just folklore. Many find they have much more severe reactions to Poison Sumac than they do to P.I.  Poison Sumac is not common in Ohio, but can be found where there are large bottomland swamps. 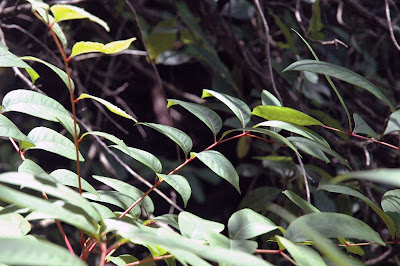 I mention the sumac, birch, willow, cinquefoil, white cedar, and hoptree, not only because they are indicator species, but  for those of us down in Athens County, we don't see these much in our area. Other woody plants of fens not common in S.E. Ohio include Red-osier and Gray Dogwood, Ninebark, Nannyberry Viburnum, and Yellow Birch.

As we travelled through the forested area, many plants, both common and unique were found. This is Death Camas, Zigadenus elegans. A beautiful 6 parted flower with grass like leaves, and green glands in the middle of each petal. With a name like Death Camas, you guessed it's probably poisonous. How about, all parts are toxic and fatal. 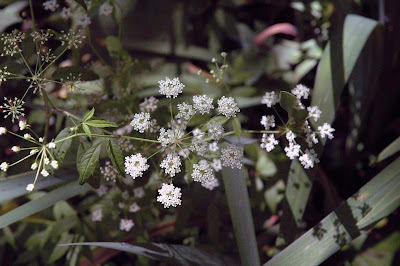 Water Hemlock, Cicuta maculata. Looking similar to its relatives Queen-Anne's Lace, and Poison Hemlock, Water Hemlock prefers shaded areas of wetlands and swamps. One of the things I notice is that in full bloom, there is an open circle in the center of each flower cluster. That may not be unique to this species, just something I see. 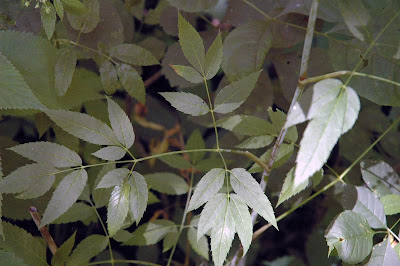 The leaves are divided or compound like other members of the family. What I find is that there is a gap between each set of leaflets. As I mentioned above, whether that holds up as absolute compared to similar species, I'm not sure. I just like pointing out things that work for me. By the way, all parts of this plant are poisonous too.

Gees, between this, death camas, and poison sumac, maybe I shouldn't go. Now who is going to visit a fen that isn't interested in finding such plants in the first place? Just don't eat everything you see! 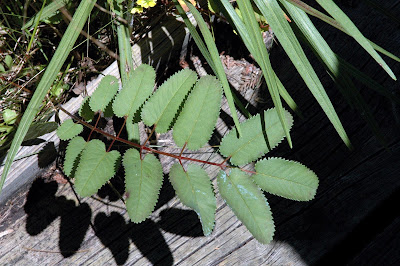 This plant isn't in bloom yet, but those leaves caught my eye. It's Canadian Burnet, Sanguisorba canadensis. A very showy plant with large white spikes of flowers, similar to the Black Cohosh I recently posted. 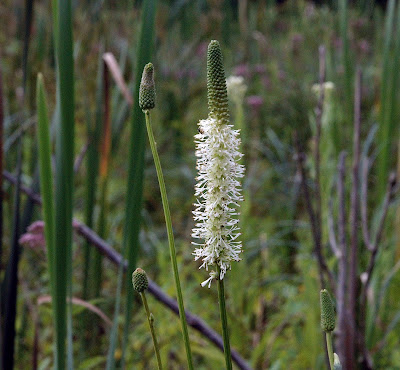 
Do you recognize this plant without the flower? The nut like fruit and perfoliate leaves are a clue. It's Large-flowered Bellwort, Uvularia grandiflora. 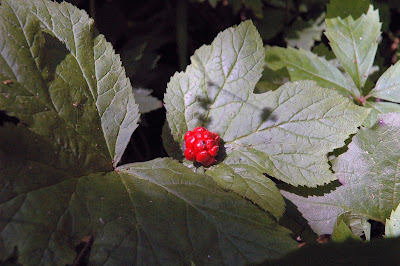 Here is another gone from flower to fruit. Goldenseal, Hydrastis canadensis. 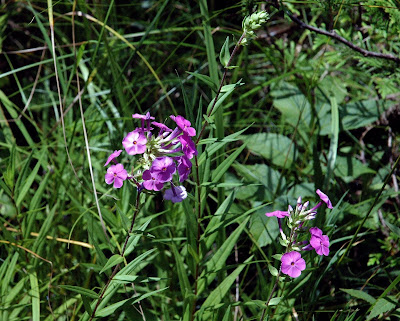 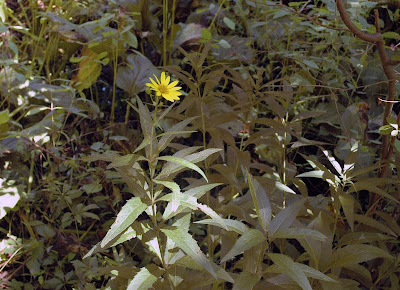 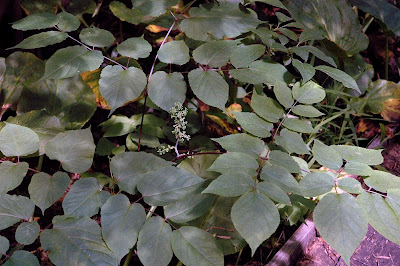 A cluster of white ball like flowers in the center brings to mind a bur-reed. But those bi-pinnate leaves that spread out 3-4 feet will dispel any bur-reed thoughts. This is Spikenard, Aralia racemosa. 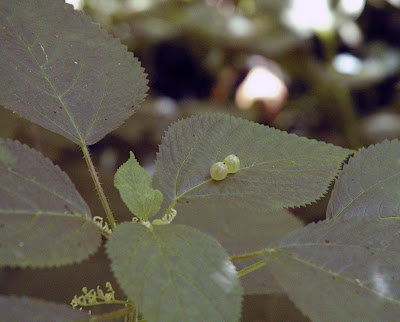 People were asking about the egg like structures all over the Stinging Nettles. These are Dasineura Midge Galls, created by a fly.

As we move into the open marshy areas we find totally different species such as this Cyperaceae member. This is Twig-rush, Cladium mariscoides, in full bloom.

Yellow Sedge, Carex flava. I was hoping to find more of the rare Carex species, but they were well off the boardwalk, out in the middle somewhere. These Sedges and Rushes aren't as colorful as wildflowers, but are still important indicators of fens. 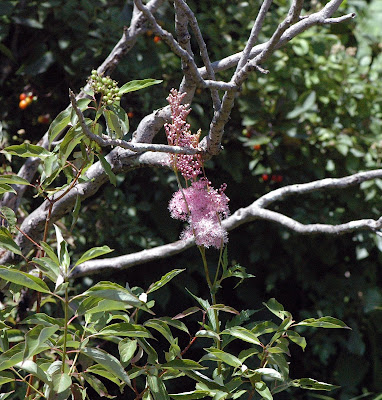 You really can't mistake these bright pink plumes with any other flower. Queen-of-the-Prairie, Filipendula rubra, is a species of wet prairie soils. It provides insects with pollen, but not nectar.

These conspicuous white flower heads make the Fen Indian Plantain easy to identify. Arnoglossum plantagineum is also a wet prairie species, but in Ohio it's now restricted to fen locations in the west-central counties of the state.

A five-parted yellow flower, with a point on each petal tip. The flowers point downward. Looks like the common Fringed Loosestrife. That's the beauty of being in these unique habitats. What you take for granted might just be something else. 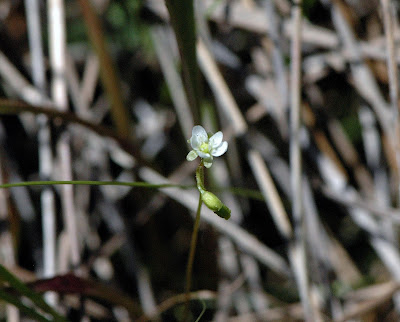 This 1/8th inch flower is often bypassed because people simply miss it. The plant is more familiar to many from the leaves rather than the bloom.

It's the Round-leaved Sundew, Drosera rotundifolia. These are the carnivorous plants you've heard about. The green leaves have red hair like projections covered with a sticky glue. When an insect gets stuck in the droplets, the leaves fold over and digest the bug. An extra protein source for the plant.

I picked up four new species of plants that day. The other exciting highlights for me were of the entomological nature. Two new species of Odonata. At first glance, this looks just like any common bluet or dancer damsel.

Up close, we can see the details of the Seepage Dancer, Argia bipunctulata. The last three abdominal segments are sky blue, and the proceeding segment is all black. This is the male. Because of its habitat limitations, this species is classified as rare to endangered in Ohio. 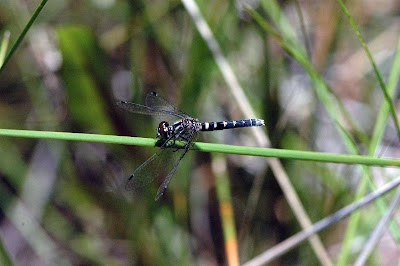 So what could top a rare Damselfly? How about an endangered Dragonfly. I thought the Amberwing was small, this is barely an inch long, and holds the record for the smallest Dragonfly in North America. The Elfin Skimmer, Nannothemis bella. This is a female, recognized by the black and yellow stripes. The male is a chalky blue.
Posted by DenPro at 5:21 PM