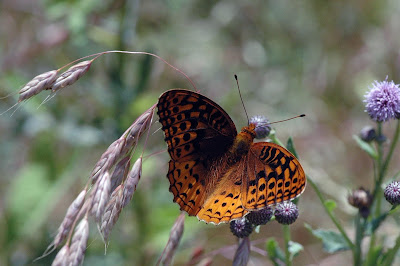 For those who thought Mothapalooza was going to be for just moth experts, it wasn't, and you missed a good one. For those who thought it was going to be a bunch of moth collectors ravaging the sheets, you thought wrong. The event was full of well rounded naturalists. Bird trips, wildflower walks, and butterfly surveys were part of the fun. I think I collected a total of four moths all weekend. It was about being a teacher, and I found it rewarding to help people identify what they were seeing. I can't whip out every name on the spot like Dave Horn and Dave Wagner, but I could show people in their field guides the names of things. From the feedback I received, the talk is already centering around doing it again next year.
When I arrived, everybody was leaving for early field trips. With nobody around I decided to walk the grounds myself. I spent the summer of 1976 in Shawnee Forest, and have a lot of fond memories. I had not walked far before coming across this plant. At first it looks like any other sunflower, but I found it to be Whorled Coreopsis, Coreopsis major. I photographed this plant back in the 70's, and haven't seen it in 37 years. Some would say it's because I don't get out of the house enough, but the real reason is you can't find it anywhere in the state but for a couple of counties along the Ohio River.

I call it Whorled Coreopsis because of the leaves. There is another plant with that name, but it has thin grass like leaves. Perhaps Greater Coreopsis is the better common name. The leaves aren't really whorled. They are opposite and split into threes. This is a dry soil species.


Growing right next to it was this plant I often see on prairies, Spiked Lobelia, Lobelia spicata. This is a fairly tall species whose flowers may be white to light blue. 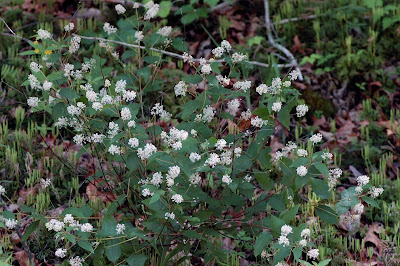 Also on this dry hillside was this bushy flowering plant called New Jersey Tea, Ceanothus americanus. I see it in Athens County here and there, but it was abundant throughout the park. 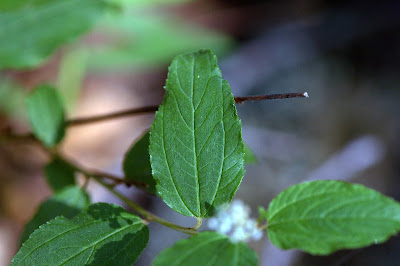 If not in bloom, you can use the leaves to help identify it. Three deeply impressed veins branch out from the base. 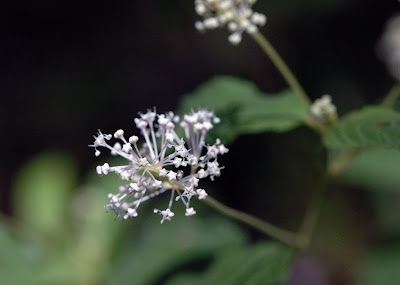 The flowers remind me a bit of Trumpet Honeysuckle, only white. This is a showy native shrub that ought to be planted more than it is. It serves as a nitrogen fixer, so it can only enrich your soil. In pioneer days it was used to make a tea. 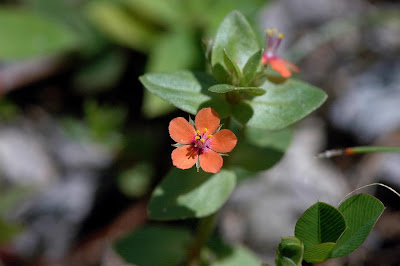 As I left to woods and walked the road back, this introduced species was in full bloom. Scarlet Pimpernel, Anagallis arvensis, only grows a few inches tall. I don't usually speak highly of exotics, but how can one resist this tiny attractive plant, and orange to boot. 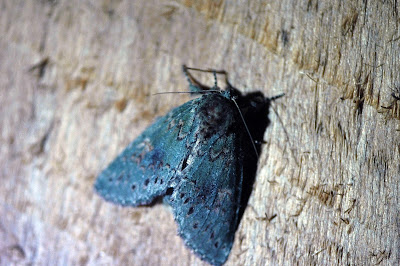 Friday and Saturday night we split the group in half. Some stayed at lights set up around the lodge, while others came out to the Eulett Center at the Edge of Appalachia Preserve. This Wave-lined Prominent, Heterocampa biundata, was just one of many species encountered. 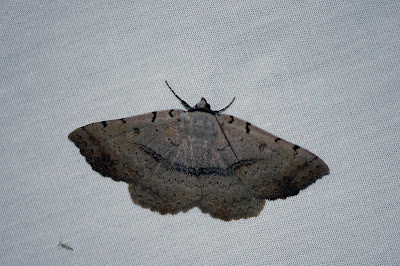 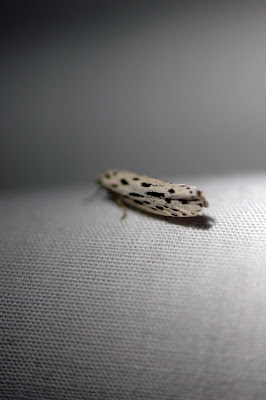 Streaked Ethmia, Ethmia longimaculella. This is new to the preserve list. There are two species nearly identical. In the other one, zelleriella, those black streaks are usually longer, and often connected. As with many moths, including the micros, such characters don't always hold up. zelleriella usually also has yellow legs and underparts, they are black and white on the Streaked Ethmia. 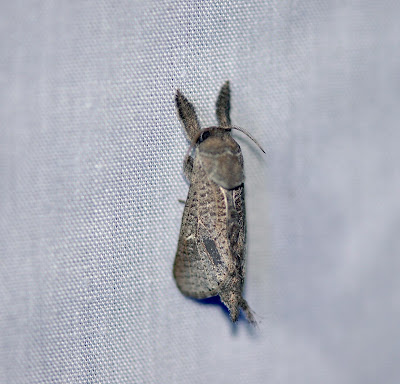 A Givira moth of the Cossidae family. It is related to the giant wood boring Carpenterworm. Givira species are rare this far north, most species being western and southern. It looks like Givira anna, which has been recorded here before. Dave Wagner wasn't so sure, and wanted this for his research, wondering if this might be a prairie associated species. Look closely at all the black pepper marks. This separates it from similar looking Clostera Prominent moths. 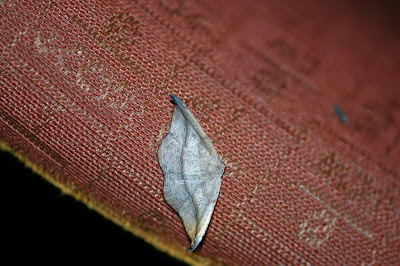 Here's another example of looking close. This could easily be mistaken for a Drepanid Hook-tip Moth. It's actually the Juniper-twig Inchworm, Patalene olyzonaria. The females tend to have these sharply pointed wing tips. 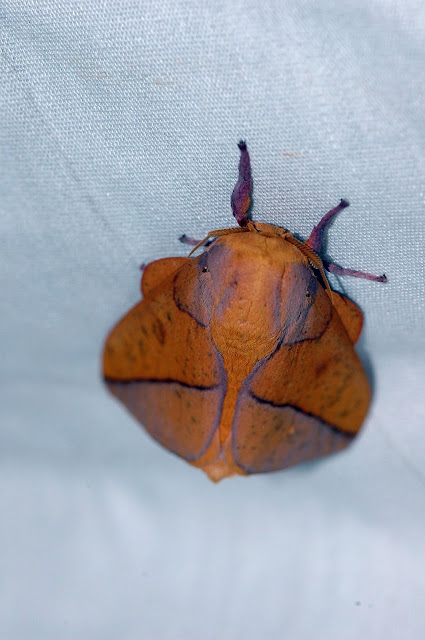 Here's one you don't want to look at too closely. If you stare at the back of this long enough, you may see a pink-orange elephant. Then again, it might be what your drinking. 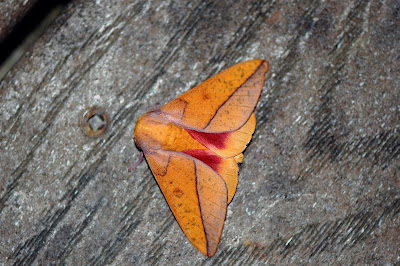 Here's the same species from a different angle. Its the Bisected Honey Locust Moth, Syssphinx bisecta. It's a member of the giant silkworm family. There are a half dozen species of these I usually lump into the "oakworms". That straight black line is used to separate it from another honey locust moth. Those bright red hind-wings made this a crowd favorite over the weekend. 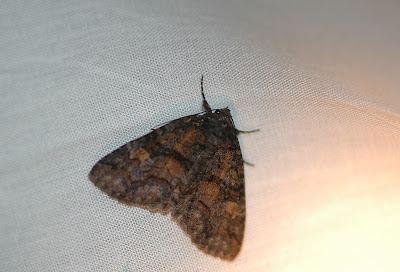 This is a terrible photograph, but I post it to once again make a point. Something I've beaten into the ground on my site many times. This is a species of Zale, and that's all it is. A few years back I used to hang out at Bugguide on a daily basis helping people. You'd be amazed at the number of folks who get down right angry when you tell them it can't be identified by a photograph. It's probably why I don't go there much anymore. (Still the best, most complete insect site in the world by the way). 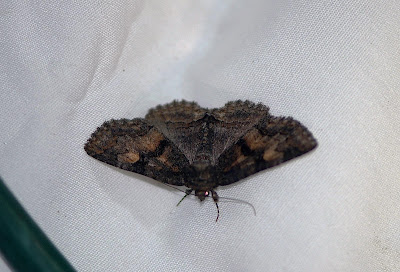 I sent these off to the Noctuid man himself, Eric Metzler. Within an hour, and I quote, " These are a group of pine feeding Zale's that can not be identified by wing pattern pictures, they need to be dissected". Everybody at the conference was very cordial and understanding of this. Many people I talked to were happy just to get a genus name. What friendly people, can't wait to do this again.

Not everything found were moths. The yellow spots and mottled appearance led to this being a Juniper Stink Bug, Banasa euchlora, another new species for me. 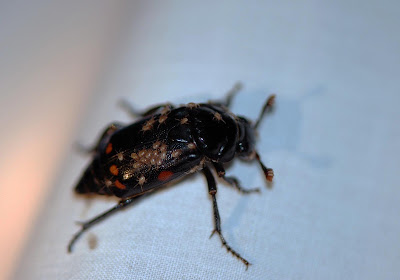 "Eww, gross" were a few of the comments flying around about this. This burying beetle went about its business, oblivious to all the mites actively crawling on its back. These beetles serve as a taxi, transporting mites to the next road kill. One orange spot on the side, followed by two small spots near the rear, make this Carrion Beetle Nicrophorus orbicollis. 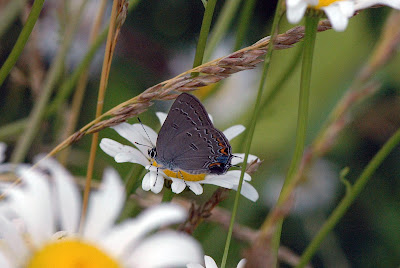 Saturday was field trip time with Dave Wagner. We weren't even out of our vans before Dave yelled Edward's Hairstreak!! There, and there, and over there. Good thing we were in the boonies, because nobody looked before crossing the street. Cameras were clicking. This Hairstreak, Satyrium edwardsii,   was once considered so threatened or endangered, as to be found only in the three surrounding counties of this site for Ohio. It has since been found in another half dozen southern counties, one in central Ohio, and two sites outside Toledo. It's still considered rare.

Edward's Hairstreak can be found around Juniper Glades, a rather specific habitat. This is the third species in this post that has something to do with Juniper, or Red Cedar in this case, Juniperus virginiana.

This species can be mistaken for the more common Banded Hairstreak, and I've done so myself. Look at the upper wing. Banded Hairstreaks have more perfect rectangular spots, often connected into a line. In Edward's, each gray spot is separated by a wing vein, and the spots are more rounded. 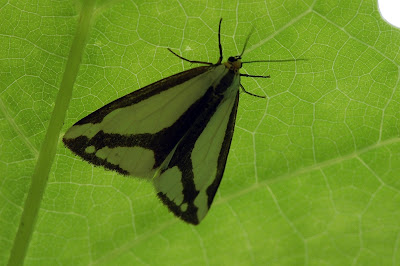 This moth just refused to land and stay on any leaf surface. Crawling underneath, I did my best to get it. This view doesn't do much for color, but it's the pattern that's more important. This is a Haploa Tiger Moth. They can be quite variable, but this streaked pattern leads me to Haploa lecontei. The dark stripe in the back middle of the wing is "usually" connected to the brown stripe on the top of the wing in other species of Haploa.

Feeding on Butterfly Milkweed was another species I had never encountered, and didn't expect to see. It's called the Unexpected Tiger Moth, go figure, Cycnia inopinatus. 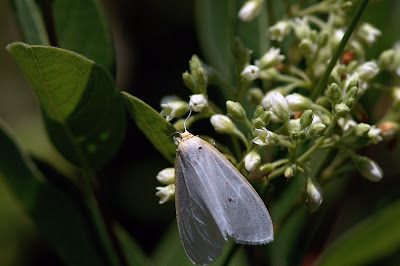 The adult of the Unexpected Tiger looks nearly identical to this Dogbane Tiger, or Delicate Cycnia, Cycnia tenera. The Dogbane species has a yellow head and thorax, and a yellow band running down the edge of the wing. The unexpected tiger is slightly smaller, and the yellow is very reduced, hardly visible on the wing at all. Sounds pretty close to me. So how do we know they really aren't the same thing? 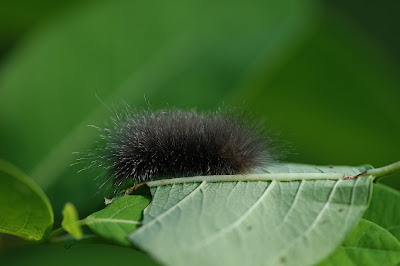 This is the Dogbane Tiger caterpillar. Not-even-close. 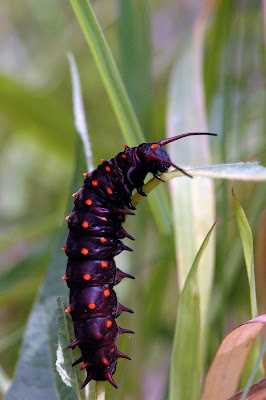 Another very striking caterpillar we found was the Pipevine Swallowtail, Battus philenor. Not rare by any means, but still not nearly as common as Black, Tiger, Zebra, or Spicebush, all of which were also seen this weekend.

So how do we top off a great day? How about  with the least common of all the species, the Giant Swallowtail, Papilio cresphontes. This guy just refused to land on anything, and I was lucky to get him in flight. That meant ME in flight chasing him.
Posted by DenPro at 4:34 PM