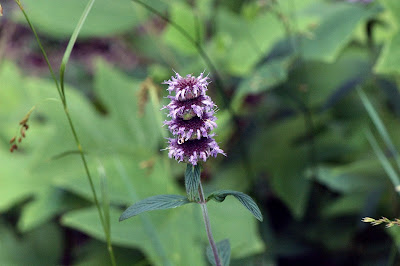 There will be no moth pictures in part 2. Hope that doesn't disappoint anyone, but like I said earlier, the field trips encompassed so much more natural history. For someone interested in multiple subject matter, like myself, this was a nice break from the night time mothing. A new species for my plant list was this Downy Wood Mint, Blephilia ciliata. 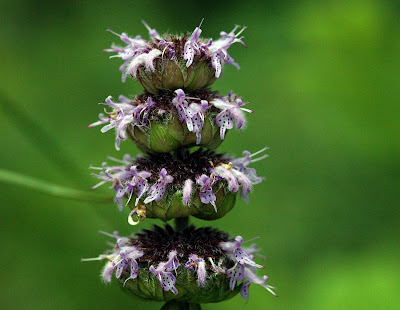 The beauty of mints are best appreciated when looking up close. Downy Wood Mint is similar to Hairy Wood Mint (hirsuta). On Downy, the petioles are shorter, and the hairs tend to hug the main stem. They spread out on Hairy Mint. Most importantly, the flowers of both are purple speckled, but are entirely purple on Downy, and white on Hairy.

Another new plant for me was this Waxy Meadow Rue, Thalictrum revolutum.

Meadow Rues as a group tend to be fairly tall species. Early Meadow Rue is a woodland species of the spring. Tall Meadow Rue is found on woods edges. I found Waxy on the edge of a slope. They all have divided leaves like this. Waxy has thicker, leathery or waxy feeling leaves. If you crush them, they smell like a skunk.

As a rule, Meadow Rues tend to have their flowers drooping down, with long protruding stamens. These flowers look more curly, like overcooked rice. Flowers on Waxy occur in both forms. This is because the species is dioecious.

Dogbane Leaf Beetle, Chrysochus auratus. A very common species, but always a favorite to photograph. It's usually found walking around on Dogbane or Indian Hemp. Being relatives of the Milkweeds, it also contains similar toxins. This beetle shows its bright colors as a warning to predators not to eat it. 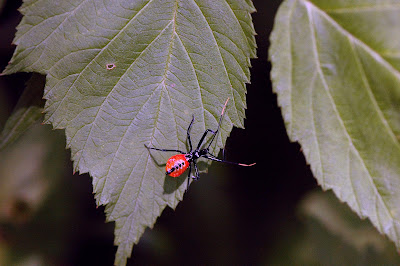 Here is another insect that advertises a warning. Remember your traffic signals, red means stop! Its not that it's poisonous to eat, but it will spray a chemical out its butt at predators. This is the nymph of the big gray Wheel Bug Arilus cristatus. 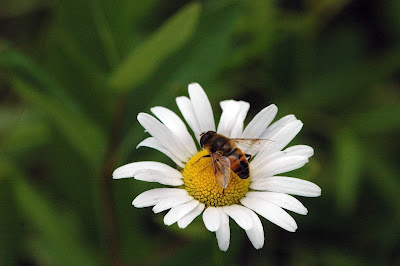 We move from warning coloration to mimicry. It's not a bee, but a fly called the Drone Fly, Eristalis tenax. 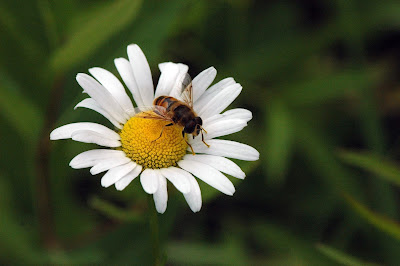 Bees have four wings, flies only two. But when they sit like this, you can't be sure there isn't another pair folded up. Look at those giant eyes, that's usually a giveaway it is a fly. Click on the photo and look at the face. There is a little black knob, followed by a thin wire. That's typical fly antennae, totally different than bee or wasp antennae. So what does this introduced fly from Europe mimic? Why the European Honey Bee of course. 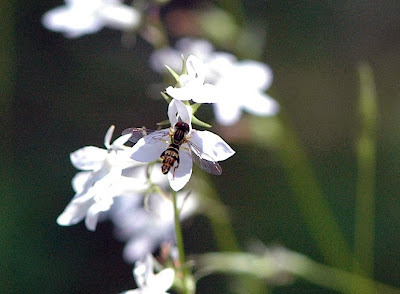 Drone Flies belong to a family known as Syrphids, more commonly referred to as Hover Flies. Unlike the one above, not all are necessarily mimics. This one with the army helmet look on the abdomen is Toxomerus geminatus.

I usually hike alone, so I have no reason to vocalize what I see. The nice thing about being with a crowd is every time someone saw something interesting, they would yell it out for everyone to see. Such was the case here. This very drab looking butterfly is something I probably would have ignored, assuming it was a worn Little Wood Satyr. But you know what they say about the word 'assume'.

Turns out it is the Carolina Satyr, Hermeuptychia sosybius. When you think of the Carolinas, think south. This species is found only in the southern counties of Ohio. It's smaller than the Little Wood Satyr, which is common statewide. 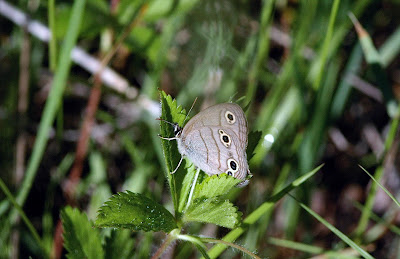 This is the Little Wood Satyr I posted last month. Satyrs usually sit with their wings folded like this. The Carolina sat with its wings open the entire time. For comparison, the back side of the Carolina has smaller spots than these, and fewer of them. 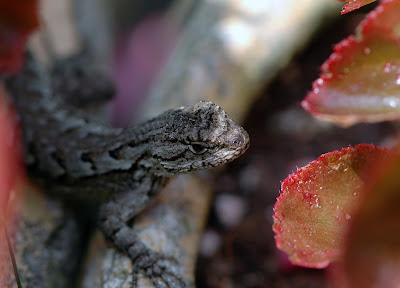 At the edge of the preserve was some private property, whose owners we happen to have met. They didn't mind us photographing things at all. That's good, because at that moment I saw this. Now I never pay attention to potted plants like Gardenias and such, but there was movement between the leaves that caught my attention. 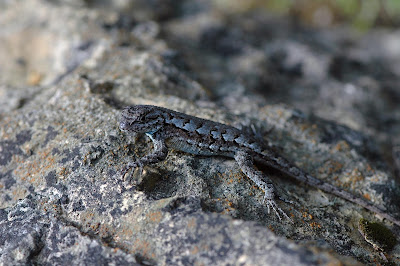 This is the Eastern Fence Lizard or Fence Swift, Sceloporus undulatus. There aren't but a hand full of lizards in Ohio, and other than the Five-lined Skink, this is one of the more common ones. They tend to be found in hot open areas or dry upland oak woods. Andrew Gibson was just returning from his hike, so we got busy shooting. 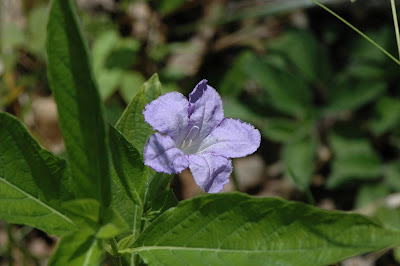 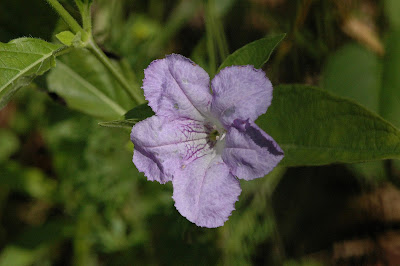 Andy and I conferred on some plant identifications, and the following are some examples. This is Ruellia. For those interested in the taxonomy, there are 3 likely species. R. humilis has sessile leaves. These clearly have petioles, so it's not that. R. caroliniensis reaches its northern limit at the Ohio river. Andy has never confirmed its existence in Adams County. That leaves Ruellia strepens, the most common and likely candidate. Ruellia is often called Wild Petunia. 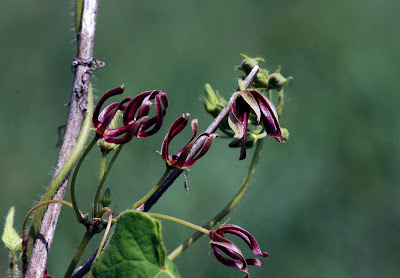 This is Climbing Milkweed, Matelea obliqua. While no longer on the threatened species list for Ohio, it is still quite rare. We all have our favorite phrases or favorite sayings, and this allowed me to repeat one of mine. (and no, it's not "do you come here often?") Instead it's-another new species for me! 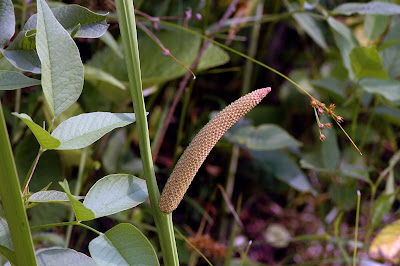 While everyone was boarding the vans, Andy rushed to show me a neat little wet seep on a hillside. On it was this plant known as Sweet Flag, Acornus calamus. Most invading plants like this tend to establish in disturbed ground, restored wetlands, or wet ditches. Sweet Flag occurs in more "natural" settings. It's circumpolar, and has caused debate as to whether or not this is a truly native or introduced species. The other true native species, appropriately named americanus, occurs further north than here. This species of Sweet Flag has one main vein visible in the leaf center, where as americanus has several distinct veins. 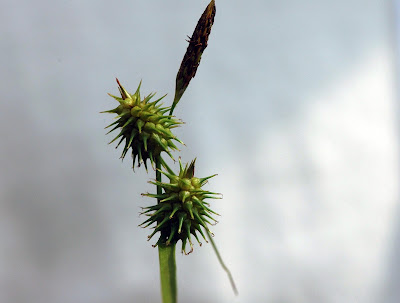 Finally, for the Sedge lovers, Andy showed me this recently described new species, Carex viridistellata. I'll end the way I started, Mothapalooza was a huge success.
Posted by DenPro at 4:02 PM