On my Slug Moths of Ohio post back in July, I featured a lot of adults, but not many caterpillars. I'll repeat a couple shots, but I have gathered quite a few more since then. 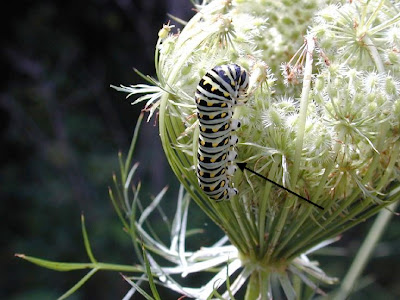 Most butterfly and moth caterpillars have 4-5 sets of what are known as prolegs on their abdomen. Because they have crochets or little hooks on the ends, they can grasp and hold on to twigs and leaves. By releasing their grip on plants, they can then move freely and crawl around, some at very fast speeds. Inchworm caterpillars only have a couple pairs of prolegs, one near the beginning of the abdomen, and another at the end. This is why those larvae 'loop' when they walk. 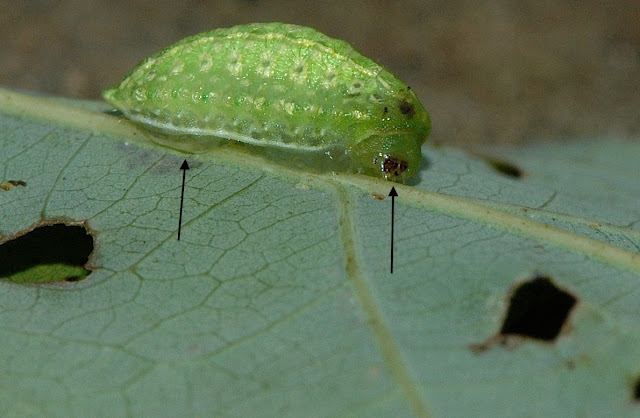 Caterpillars of the family Limacodidae lack these prolegs, and instead have a jelly like belly similar to snails and slugs. Because of this, their movements are very slow. Their heads are kept hidden and protected under a turtle shell shaped thorax. 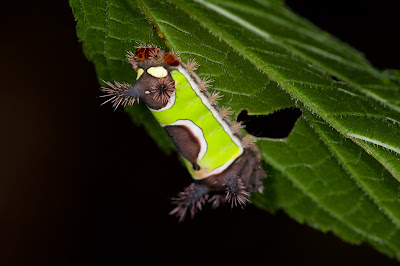 Since these caterpillars can not move quickly away from danger, they have various spines protruding from the body, or on elongated tubercles. Many contain a toxin or poison that can irritate our skin, or the body of a potential predator. Perhaps the most famous is the Saddleback Caterpillar, Acharia stimulea. The adult is dull brown and often overlooked. But the larva is easily spotted with a green back and brown saddle shape in the middle.  They may be seen so frequently because they feed on so many plants. From Corn to Cherry, Apple, Elm, Dogwood, Blueberry, Oak, Sunflower, Citrus, and many more. 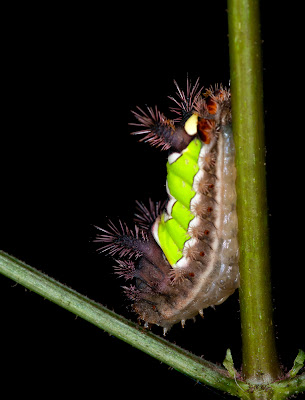 Here is a real nice closeup showing the slug like undersides, and the three pairs of true legs up near the front. Thanks to Lisa Sells for this excellent picture. 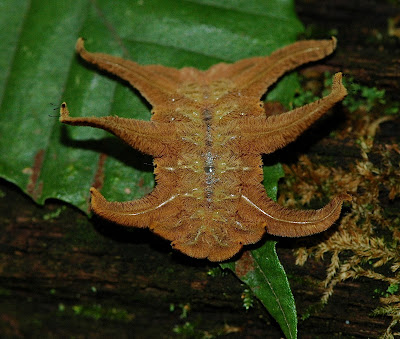 All the larvae in this family have strange shapes, and this one is no exception. Known as the Hag Moth or Phobetron pithecium, the caterpillar may be light brown like this, or even a deep purple-brown. The elongated spine sections, or more properly, the scoli, are designed to fall off upon contact with a predator, much the same way as porcupine quills.  It is not unusual to see these walking around with several of their 'arms' missing. Notice also the black hair like setae at the ends, which are also sensitive to touch. 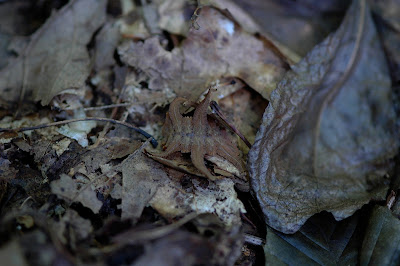 Many species in this family have surprisingly good cryptic coloration. Unless you know right where to look, these guys can remain hidden in the leaves. 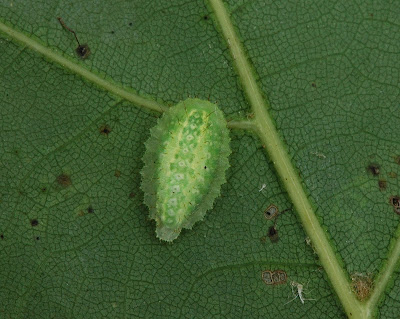 Here's one known as the Yellow-shouldered Slug, Lithacodes fasciola. All these larvae are small, barely reaching an inch. This is a younger instar. In this stage you can see sharply pointed black hairs or spines. 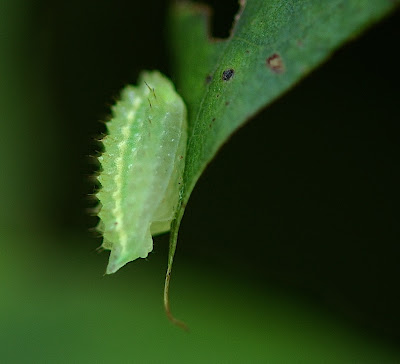 Another closeup showing the slug like bottom they all possess. Their undersides have often been described as having sucker like discs to help them move. 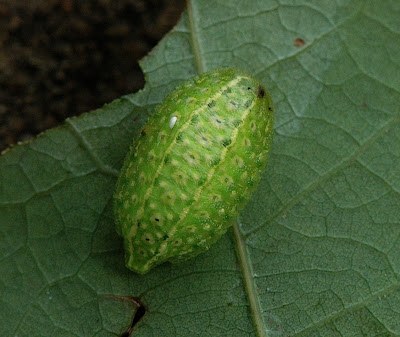 Upon maturity they lose those black hairs, and the surface is smooth. This one reminds me of a watermelon. There are several other very similar looking species to this, most of which look alike in younger instars. Pay special attention to the two yellow stripes. If they were bordered by a dark line, this would be Apoda biguttata, the Shagreened Slug. 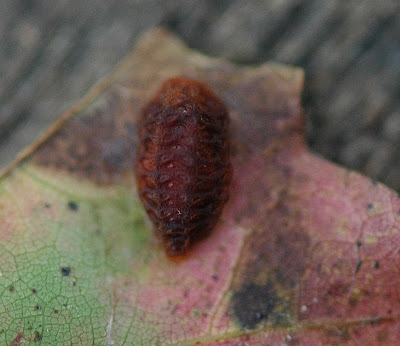 Before entering the pupal stage, many species will spin a cocoon with a detachable lid. I have read that others like fasciola will simply shrivel up and form a naked pupa. I have several I'm still waiting for to hatch, but I believe many like this simply desiccated and died, possibly from being parasitized. 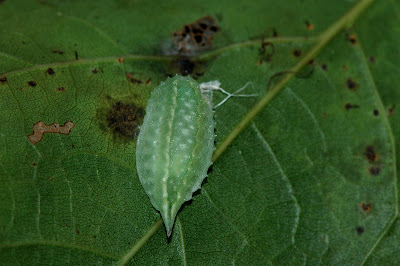 Here is one of those similar looking species I mentioned. It has the two stripes like the one above, but there are subtle differences. This is one of the Packardia larvae. Caterpillars in this genus look nearly identical. I believe this one is P. geminata, the Jeweled Tailed Slug. As to what to look for, there is a hint in the name. Look for the long tail on this one. Also look at the inside portion of the yellow stripe, you'll see the line is pretty straight.  Packardia elegans, the nearly identical one, often has a red tail. The yellow stripes on elegans are not in a straight line, but form wavy, almost semicircular lines down the back.

While not based on morphology, the Jeweled Tailed Slug is very common in this area. P. elegans, the Elegant Tailed Slug is not. After searching for over 20 years, I recorded elegans in Athens County for the first time ever this past summer. 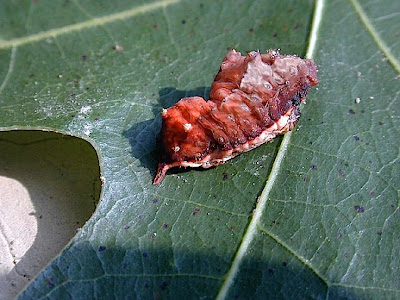 Ranging from orange to brown, Parasa chloris, the Small Parasa, is a hump-backed caterpillar. Each hump contains a white spot with stinging spines. This one also has a small pointed tail. Look for it on plants like Oak, Aspen, Basswood, Elm, Rose, Dogwood, Beech, and many other trees and shrubs. 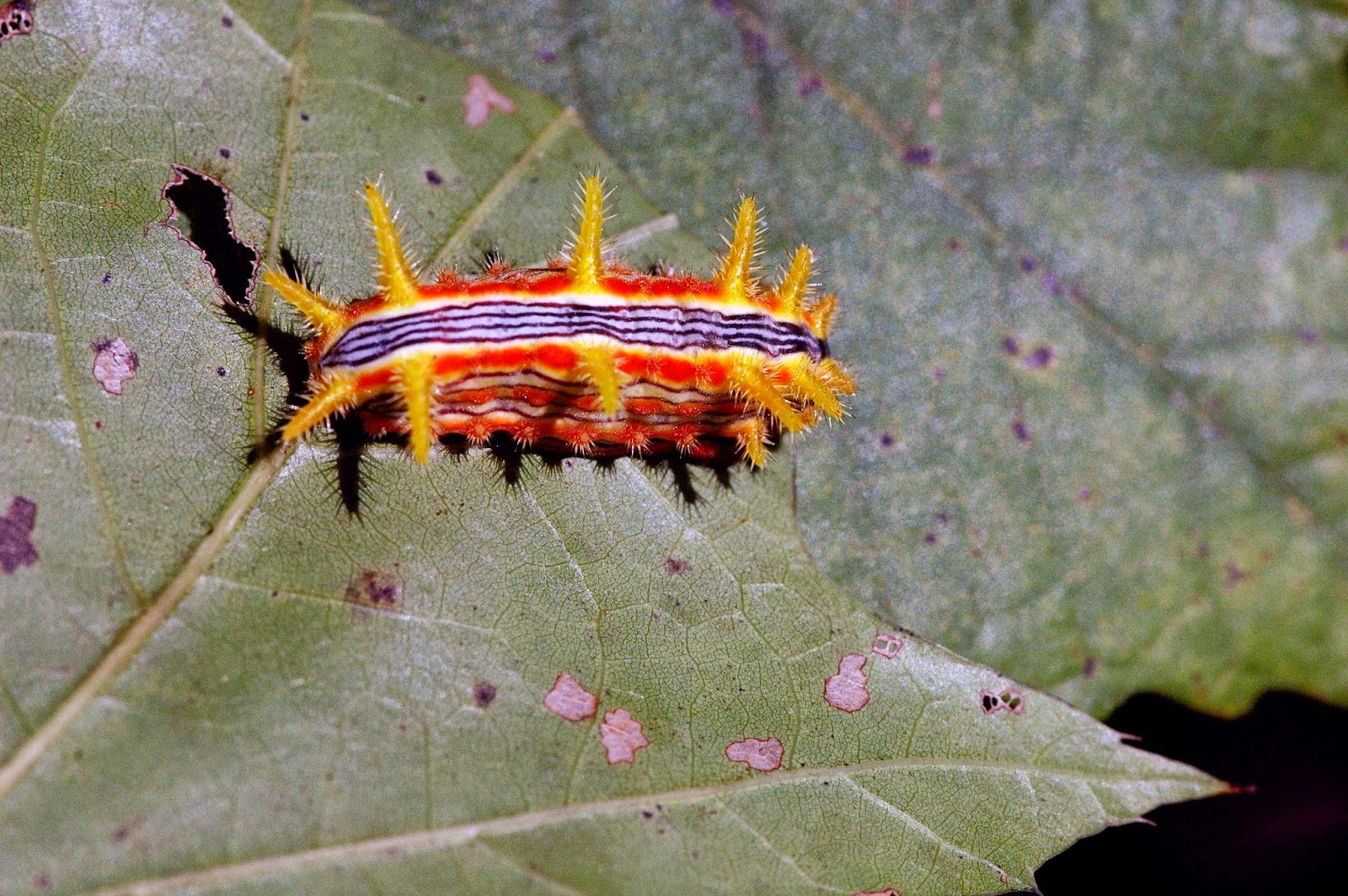 Parasa indetermina, the Large Parasa or Stinging Rose Caterpillar. By far, one of the most striking of all our colorful caterpillars. 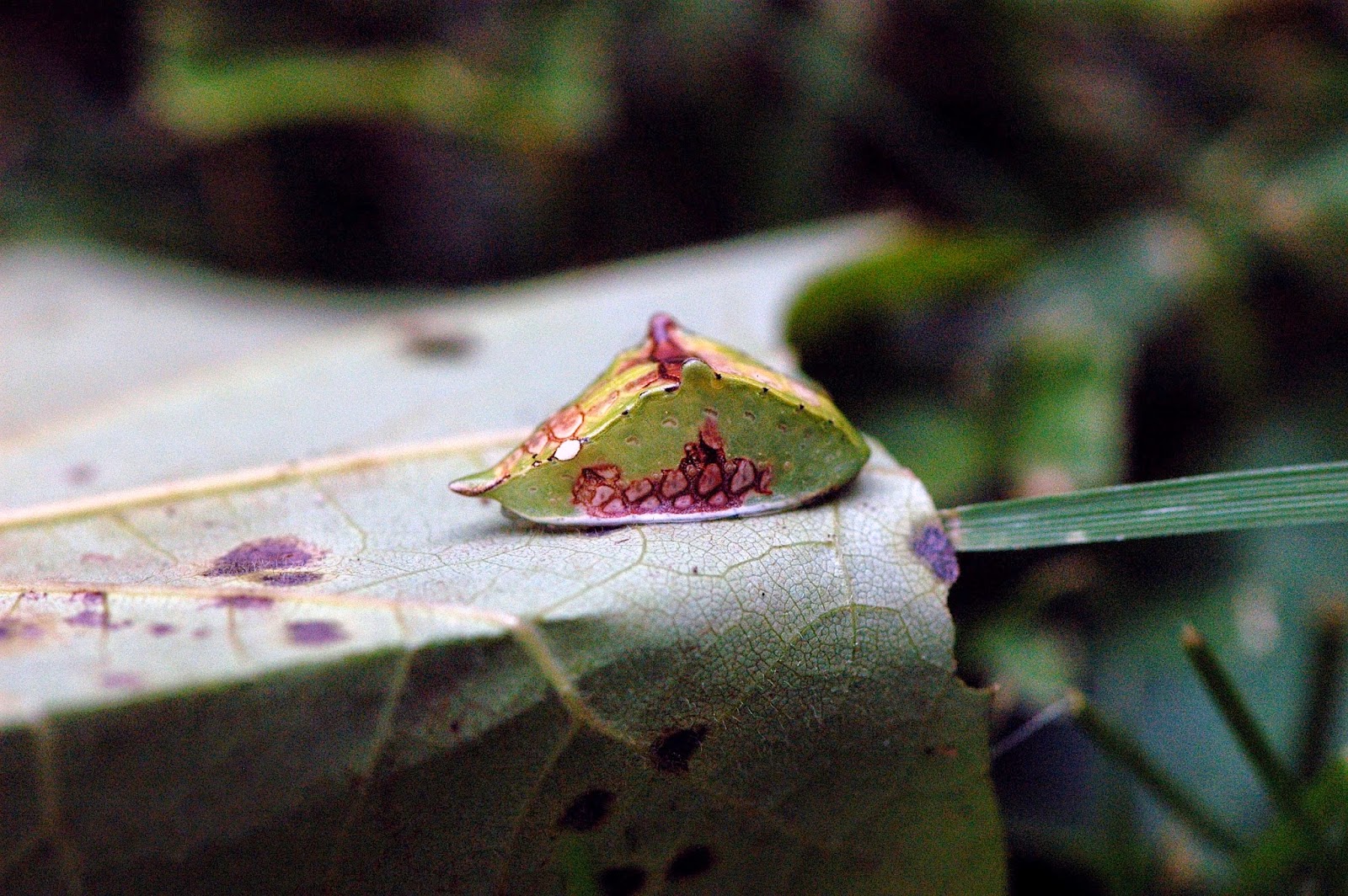 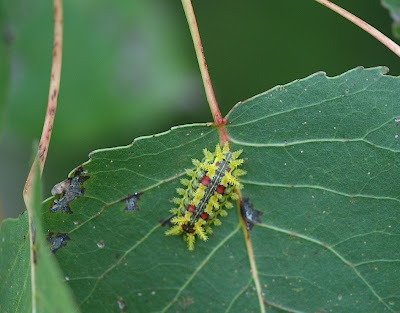 The green, yellow, and red mix make Euclea delphinii, the Spiny Oak Slug easy to identify. The color does vary though. The yellow marks on the back may sometimes be orange or pink. Rarely you may find a somewhat albino form where everything is white, and the red marks are so dark they appear black. Next to the Saddleback, this is one of the most commonly seen in Ohio. 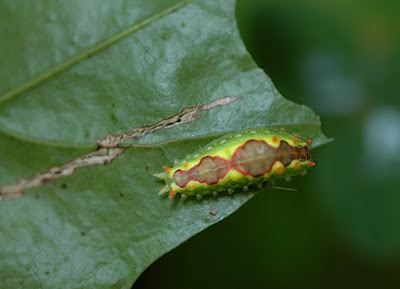 Here's another one difficult to identify. This is Adoneta spinuloides, the Purple-crested Slug. They are elongate, green on the sides, yellow on the back. The dark blotches are purple to brown and often run together like this. The similar species, A. bicaudata, usually has more diamond shapes on the back that are separate but joined by a narrow red line. Using that character alone to separate the two is not always reliable, as both show lots of variability.

I prefer to look at the tails sticking out the back end. On spinuloides the tails are short. On bicaudata, (meaning two tails), the tails are twice as long as the above. 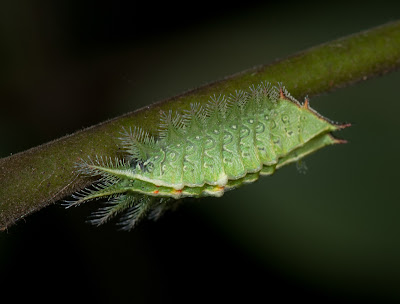 Another nice photo that Lisa Sells sent me. This is Isa textula, the Crowned Slug. The green spines protrude out in every direction and add to its protection. 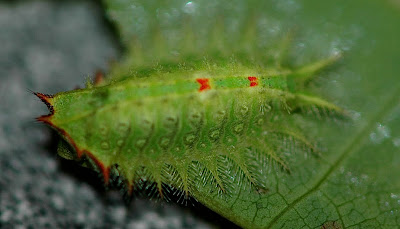 This species is dorsoventrally flattened. The red spots on the back may be present or absent. It's called the Crowned Slug because of the bloody red crown of thorns look in the head region. Look for it on members of the beech family including Beech, Chestnut, and Oak. It also feeds on Hazelnut, Cherry, Buckeye, Hornbeam, and others. 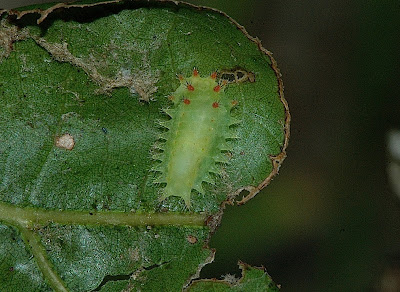 This is an early instar of Natada nasoni, Nason's Slug. There's not much to look at when it's this young. A green caterpillar with a cluster of red scoli in the upper regions. 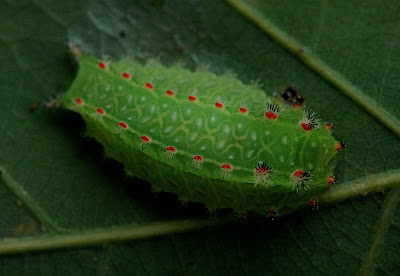 As the larva matures, the true beauty comes out. Two rows of red spots, each tipped with many black and white spines, and a connected group of 'alien' faces down the back. The food plants are the same as all those mentioned earlier. At this point, the species has been found in Ohio only in the southern half of the state.

Finally we have what are known as the Button Slugs. These are the smallest of the family, less than 1/2 inch. As with certain other species, there are two that look the same. These are the Red-crossed Button Slug, Tortricidia pallida. They look like little flying saucers, and the red marks on the back remind me of a jet fighter. The red cross is even on all sides, including the 'wings' as they reach across the sides of the larvae.

On the Early Button Slug, T. testacea, the red markings may be less wide on the sides, and the borders less even. That isn't saying much, but I have trouble telling them apart. The adults of course are easy to separate.

Here is an early instar of the above. The cross is not yet developed. The red spot near the end is usually present, but the middle red diamond is often missing, making identification even more difficult. It's best to rear these out to adults to be sure. I have mentioned 17 of the 18 slugs found in Ohio. Still hoping to shoot the Spun Glass Slug to make this post complete. 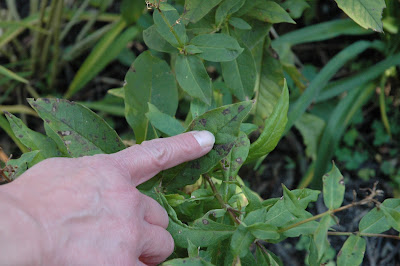 To find out just how serious some of the stings from these caterpillars can be, I subjected people to various species by having them touch the spines. 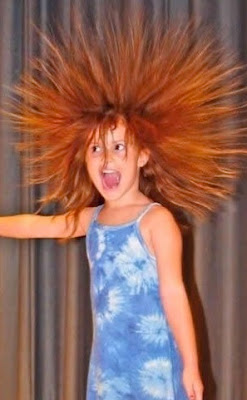 After seeing this reaction, I just had to find out more. 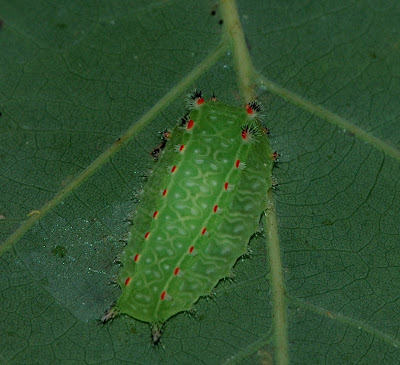 Here is Nason's Slug again. I figured they had pretty good spines on them, and look at the result from grabbing one of these. 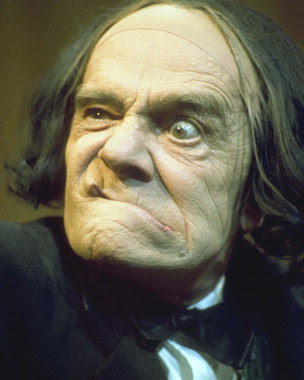 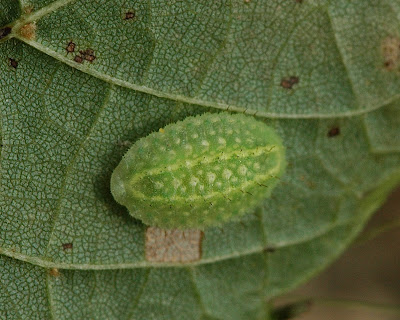 Here is Lithacodes fasciola. I thought those hair like spines might get a good reaction, I wasn't disappointed. 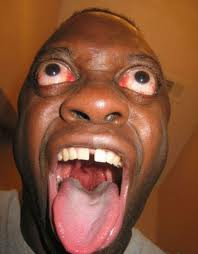 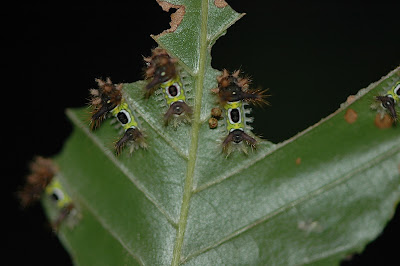 Okay, I know what you're thinking. It's unfair to test the pain threshold of others without putting myself to the same test. 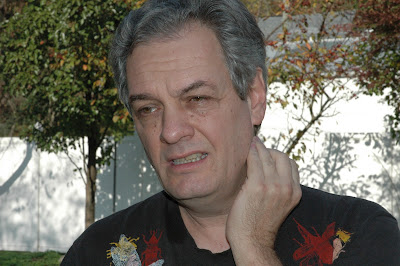 So I took a leaf full of those young Saddlebacks and pressed them against my neck. 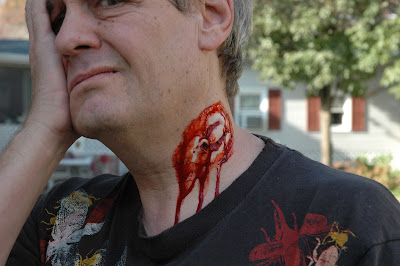 OH MY GOD!!  Never will I do anything like that again! 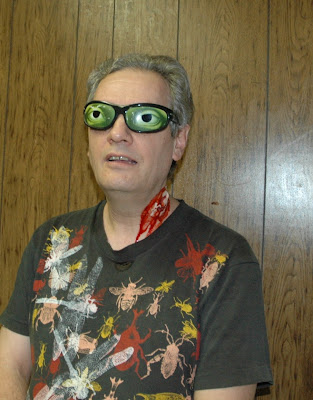 hahaha, just kidding!  Happy Halloween!!!
Posted by DenPro at 12:25 AM