Hiking around looking at "stuff" 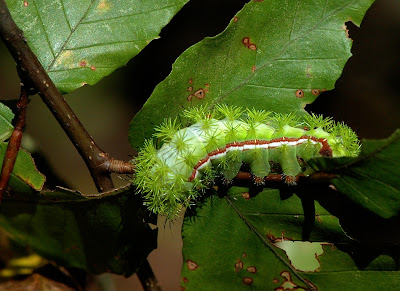 I've been out looking on Beech and Oak for Slug Moth caterpillars before the season ends, but haven't had much luck. I did come across this striking IO moth larva. I won't begin to list their food plants, as they number over 100. The name comes from Greek Mythology. IO was a maiden seduced by Zeus (what's new).

The story goes that Zeus, due to his infidelities, disguised IO as a young calf so his jealous wife Hera wouldn't recognize her. But she saw through it all and sent stinging deer, horse and bot flies to forever torment her. The stinging abilities of the IO caterpillar are not to be taken lightly. 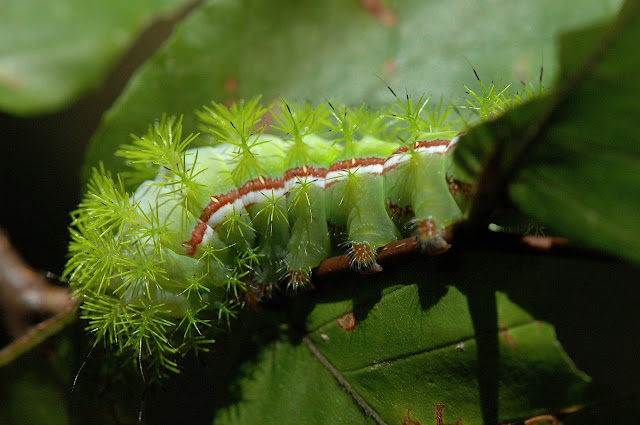 IO caterpillars have two types of spines. The black hair like setae, which simply need to be touched to emit their toxin, and the green sharp spines which inject a poison upon penetrating the skin. Reactions in people range from a mild Stinging Nettle sensation to really severe pain. 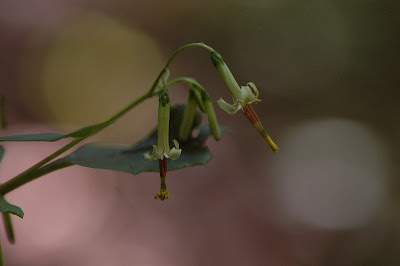 The galls were all found in Oak dominated woods, but I've been hiking mesic woods, wetlands, hemlock gorges, prairies, and parks. The following are just a batch of miscellaneous pictures from some of those locations. These creamy white shooting star like flowers are from Tall White Lettuce, Prenanthes altissima. 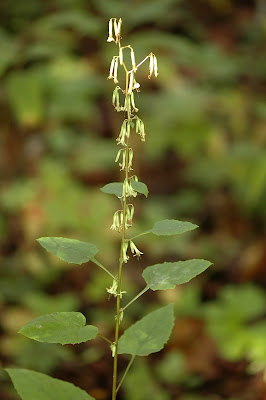 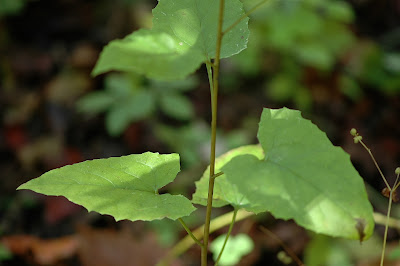 The flowers when first popping out may point upward, but eventually will droop down. There are several similar species in our area, and both flowers and leaves should be examined. Some have leaves highly divided like a cats paw or lions foot, others are arrowhead shaped like these. Some species will show both divided and undivided leaves. 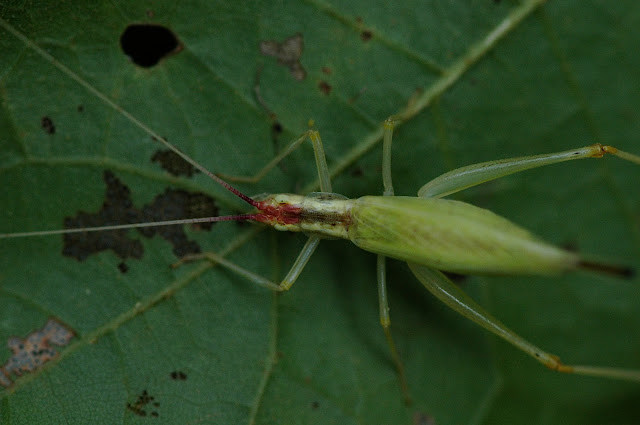 I have come across a wide variety of tree crickets this summer. Perhaps I'll do a post on them after accumulating a diverse group of photos. This is a female, you can see the ovipositor in back. I focused in on the head region for identification. Along with the red head, the basal portions of the antennae are also red, making this the Broad-winged Tree Cricket, Oecanthus latipennis. 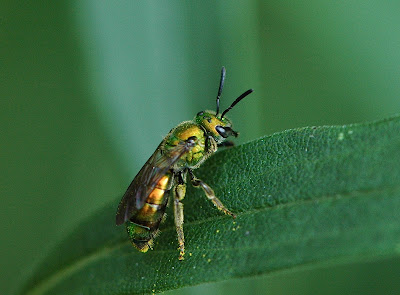 Halictid Bees are important pollinators and many can be recognized by their iridescent green and gold colors. This is Augochlora pura, the Green Sweat Bee. I've never had a problem with this one landing on me. It's the little black sweat bees that can be annoying. 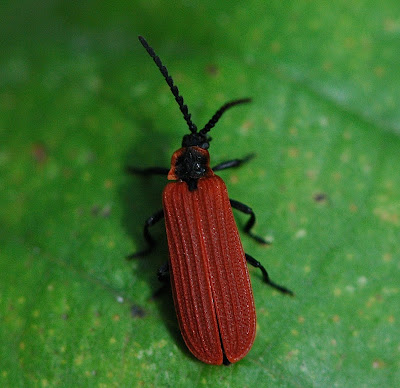 The Red or Golden Net-winged Beetle, Dictyoptera aurora. The Lycidae family contains beetles that have raised veins along the wings. Unlike most beetles, the wings or elytra are soft. One would think this makes them more vulnerable to attack, but the bright color is a warning to predators that they taste bad. The shield shaped thorax looks a little like that on Firefly Beetles, which they are related to. 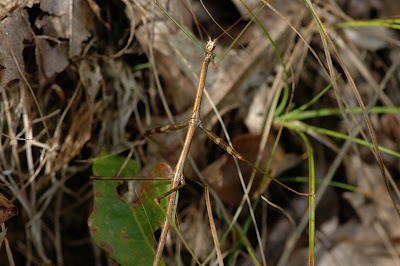 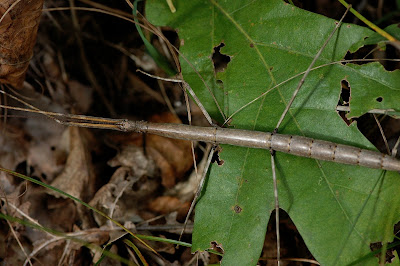 I posted a green Walking Stick earlier this summer, but as the leaves turn from green to brown, so do these critters. The upper one with the green front legs is a male. It is smaller and skinnier than the female. I found them together trying to mate. He darted for cover as I approached. Apparently I was an unwelcome guest. After the pairs have been joined together for awhile, it's hard to separate them. Look for mated pairs during the rest of October, especially in oak woods. 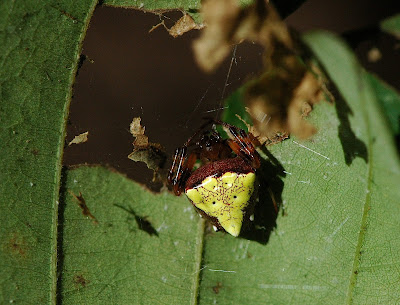 Several students have been asking about all the fat bodied spiders they see in the woods right now. The Orb Weavers are abundant around here in the fall. This is Verrucosa arenata, the Arrowhead Orb Weaver. The triangular abdomen can be yellow or white. Before reading up on this species, I had never paid attention to how they rest in the web. Orb Weavers as a whole all sit on a web with their head facing down. V. arenata sits with its head looking up. Research has shown that unless you are an oversized glutton, these guys are just as fast and successful wrapping prey running up as other species are running down the web. 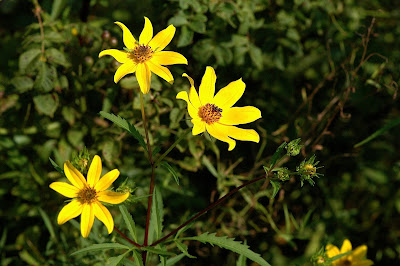 Beggar-ticks, Spanish Needles, Tickseed-sunflowers, or Bur-marigolds. Whichever common name you prefer, the Bidens are common late summer and fall bloomers. Look in any moist ditch or wetland. This common species is Bidens polylepis. 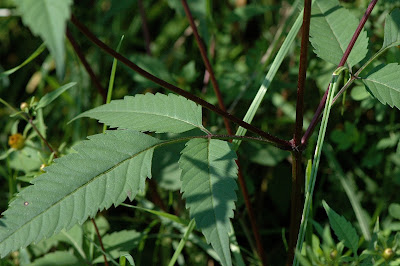 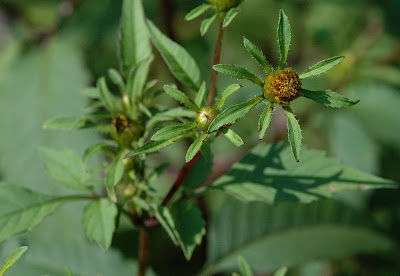 Some Bidens have opposite simple leaves, but most are divided. This is Bidens frondosa, with its eight bracts behind the flower head. Most people don't even see this plant, or else think it's done flowering. This is in full bloom. The flowers have no petals or rays. 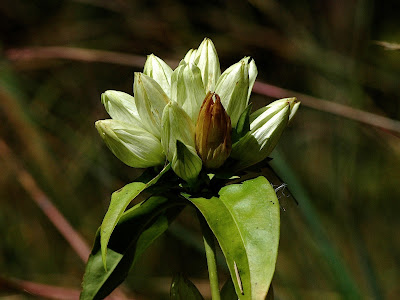 Just about on its way out. I was lucky to get this as it was starting to turn brown. The White Gentian, Gentiana alba is rare in Ohio. It's related to the brighter colored Blue Bottle Gentians. Not as showy as the Fringed Gentians either, it's still a good find. Look for it on prairies. Speaking of Gentians, go visit The Natural Treasures of Ohio. Andrew Gibson just did a nice post on Fringed Gentians. 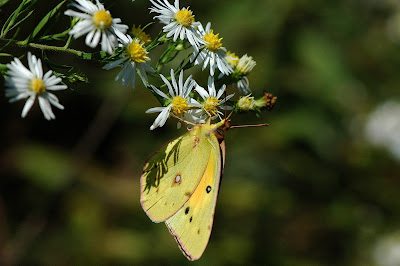 While out shooting asters, I took the opportunity to get this Orange Sulphur butterfly. The Alfalfa or Orange Sulphur looks similar to the yellow Clouded Sulphur when the wings are closed. 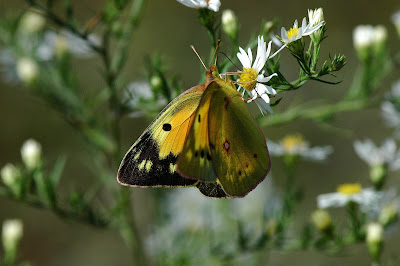 On both sulphurs the sex is determined by the outer edge of the front wing. This is a female because of the spots in the black portion. The males have unbroken black bands. The white Cabbage Butterfly females also have more spots on the wing than males.
Posted by DenPro at 5:40 PM