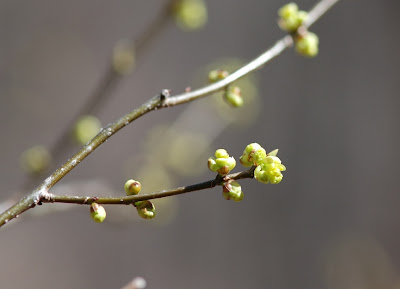 It has been raining a lot down here lately, and I mean a LOT! It's hard to find a clear sunny day, so when it occurs, one has to get out and hike. I'm curious to see what mid-April is bringing us. Abundant in our forest understory is the small but bright bloom of Spicebush shrubs. 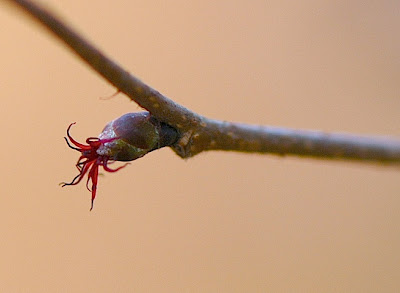 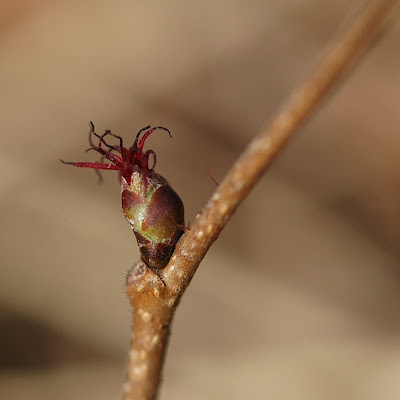 Looking like a pink octopus, the Hazelnut bloom is one of our smallest woody plant flowers. Middle April is already well past the peak time for this species. Most flowers have turned hard and black, but I was able to find a couple magentas still hanging on. The male reproductive parts consist of long hanging catkins which drop the pollen on to this female. She may lack flower petals, but she still has 'style'. 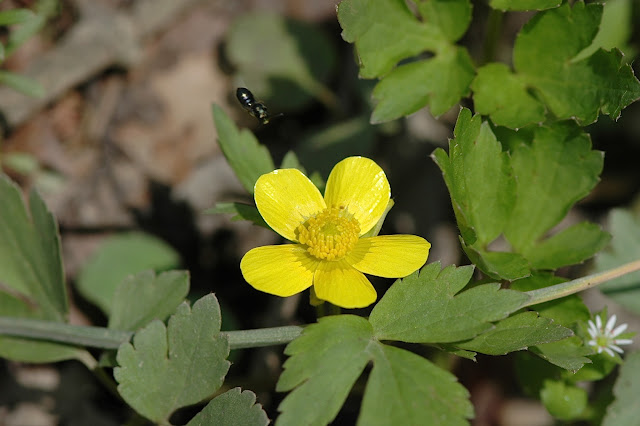 A pollinating wasp prepares to land on this buttercup. The buttercups look very similar to one another. You must examine both the leaves and sepals to be sure. This is the Hispid Buttercup. A similar looking plant, the Swamp Buttercup, Ranunculus septentrionalis, is now considered the same species. 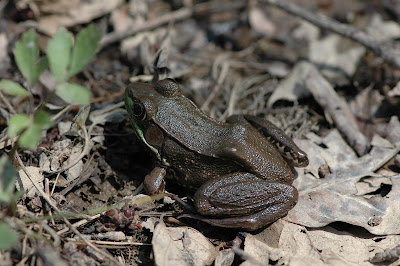 Isn't it funny when you approach a pond that every frog but one jumps in from the edge. Well I found "the one".  Sneaking up on this Green Frog, bending down on your knees, and leaning forward in hopes it doesn't move can be tricky, especially when you're out of shape like myself. 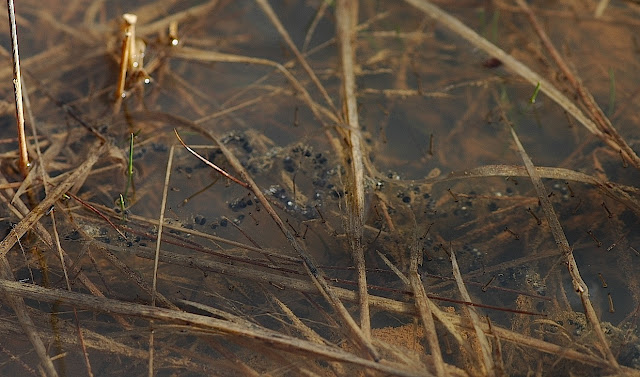 A deep pond is one thing, but even just a water filled ditch is enough for some amphibians to lay eggs. Often people ask how you tell toad eggs from frog eggs. These are toad eggs. They are black and white, and laid in long "strings" rather than round batches. 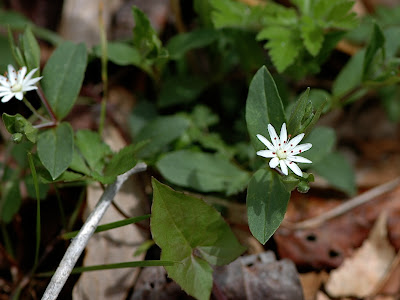 Red pins stuck in a pin cushion always attracts my attention to the Great or Star Chickweed. These plants have notched flowers in fives. On most species you can see the notch at the bottom of the petals. On this species it really looks like it has ten petals. 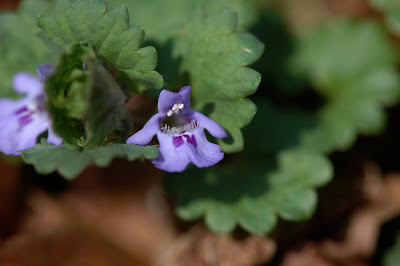 Creeping Charlie, Gill-over-the-Ground, Ground Ivy, or throw the bean bag into the buck-toothed clown mouth. Whatever you wish to call it, this plant is a common bloomer right now in most open, sun-filled habitats. 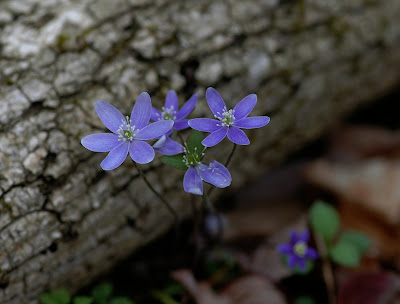 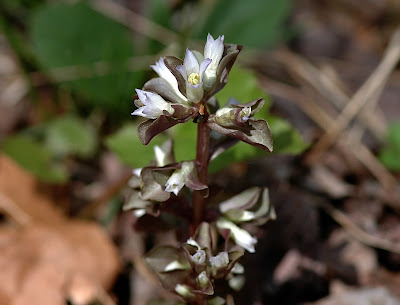 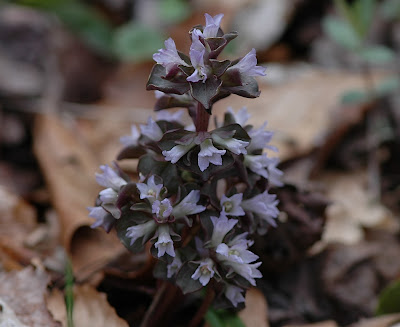 Not as showy as other members of the Gentian family, and often overlooked because it grows only a couple inches tall. This is Pennywort. It can be both white and light purple. Look for it in moist bottomlands right now. 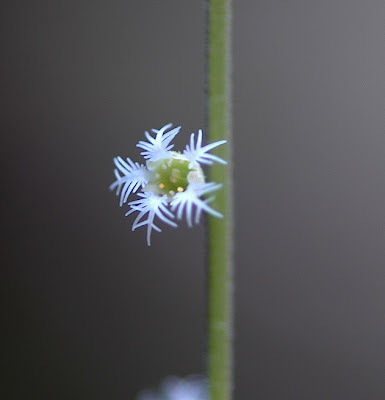 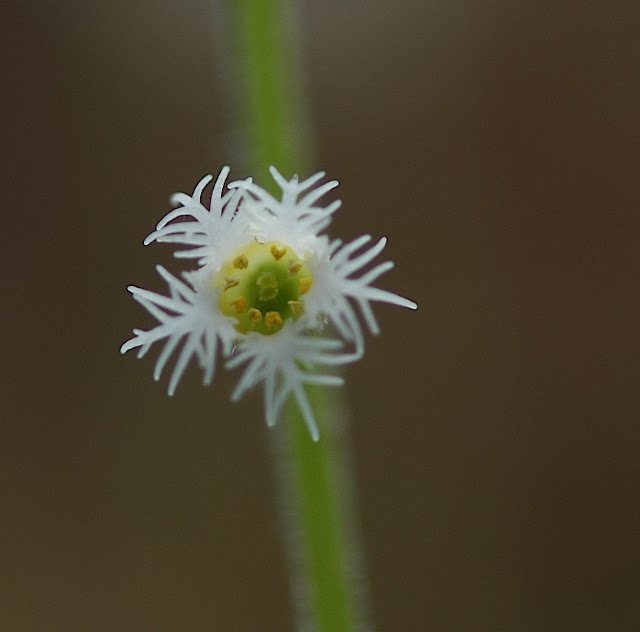 8 ball in the center pocket. Another under-appreciated plant is the Bishop's Cap. While they grow in 8-10 inch spikes or racemes, it's the up close look that exposes their real beauty. The have 5 fringed petals which look like snowflakes. The stamens are double in number. 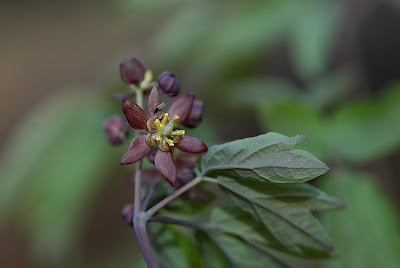 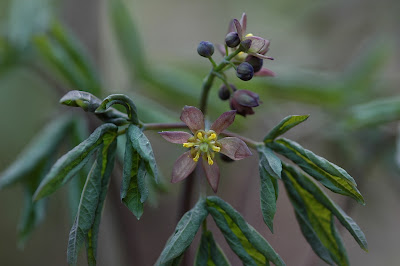 Because there are so many larger and more showy flowers out right now, the Blue Cohosh is yet another that people may walk right by without seeing the bloom. With the leaves still wrinkled and expanding, the yellow center should attract your attention. The six petaled flower (and sepals) are yellowish-green in the more common species. This maroon or burgundy color is from the recently split species known as giganteum, or the Giant Blue Cohosh. Thanks to a little retracing of comments from Mike, Scott, and Jim for the update on this variation. 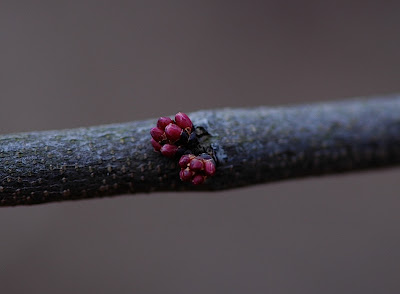 Besides wildflowers, I have been in search of woody plant blooms as well. Last week these red "nubs" began to protrude from the buds. This is Redbud, and soon our wood margins will be crowded with brilliant red flowers. 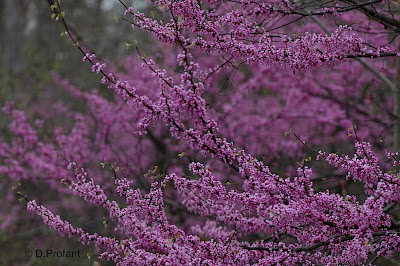 Update: Here's what you can expect to see for the next several weeks on Redbud trees. 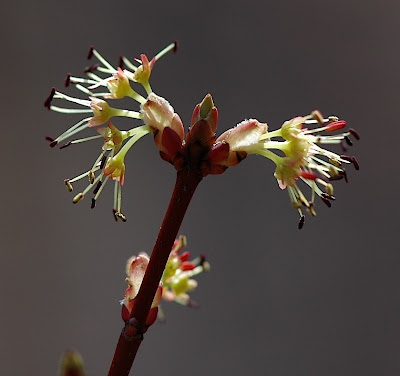 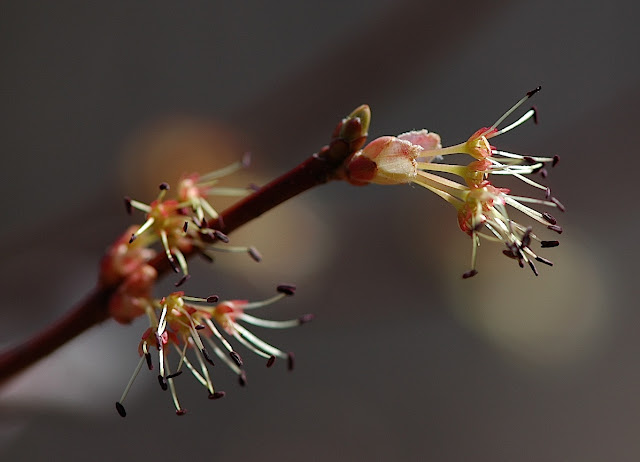 I never pay much attention to maples in bloom, but the Red Maple up close is extremely striking! 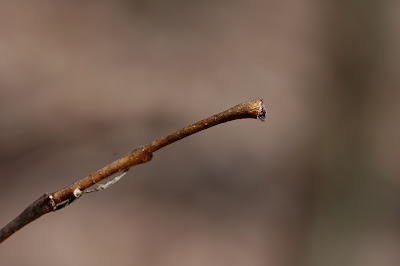 For some time now I have been on a quest to find Leatherwood, Dirca palustris in bloom. I have never seen it flower. Leatherwood twigs are brown or leather in color, and have a false end bud barely sticking out below the point of the twig. The word palustris indicates swampy areas, but in our region it's hard to find with all the steep slopes we have. There is a population near our campus where the slope forms a ledge or level spot where water gathers. 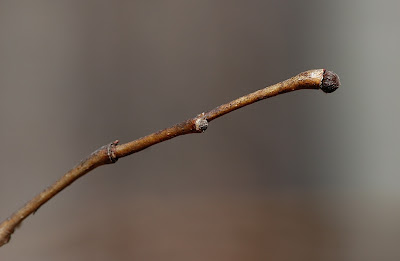 After finding it in winter condition, I returned a week later to see this brown toupee, or Mo of the Three Stooges sticking out further, but still no bloom. Leatherwood is named after the fact you can bend and twist it into knots and it will not break. Native Americans did use it for rope. 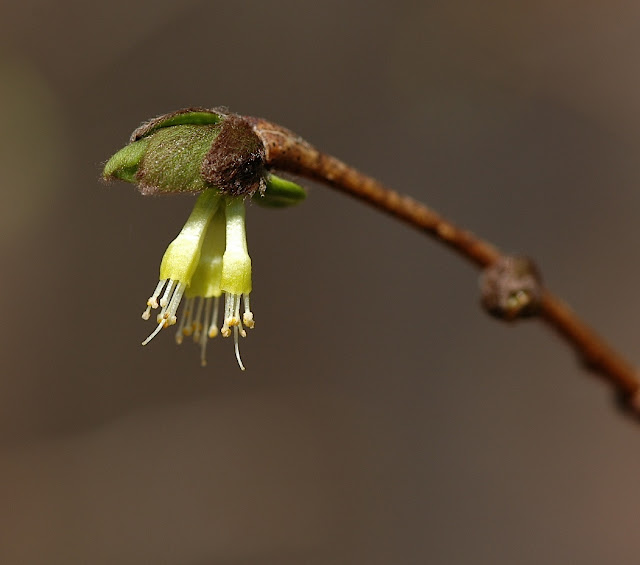 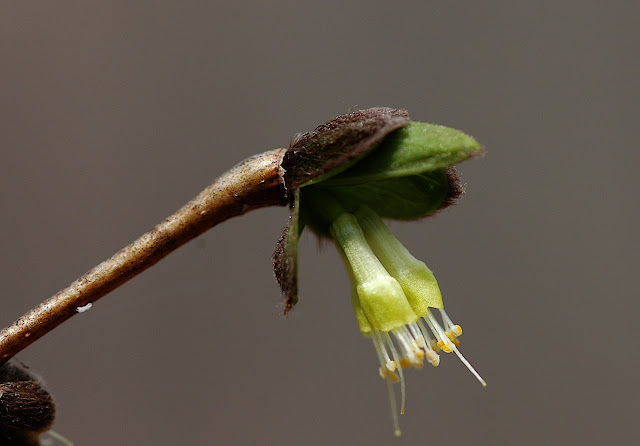 Finally last week I hit it just right. All of the plants were in bloom. Small tubular shaped flowers (usually three), pop out of the bud and hang down.  Check another one off my list.
Posted by DenPro at 5:44 PM