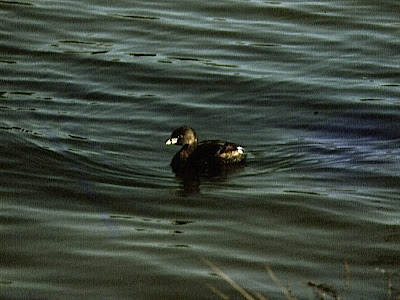 I recently posted a series of waterfowl and wading bird shots, but there are still other water birds passing through right now. One of those groups are the Grebes. The grebes have different shaped bills than ducks, and instead of having truly webbed feet, the individual toes are webbed. Occasionally Horned and Red-necked Grebes pass through, but by far the most common is the Pied-billed Grebe. Smaller than any duck, it spends a lot of time diving. The all brown bird is best recognized by the ring on the bill. 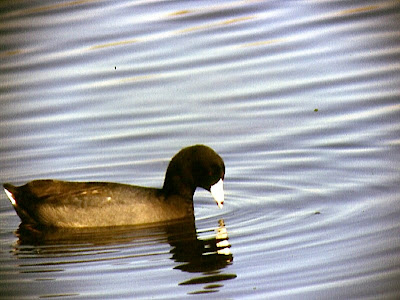 Dark gray back, black head, and bright white bill make the American Coot easy to spot. They look like a chicken when swimming fast. Their green legs and feet are similar to Grebes, but they are very uncomfortable walking on land. Coots are related to Moorhens and Gallinules. 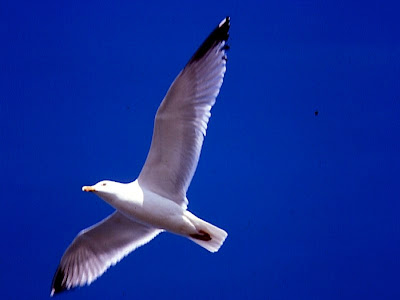 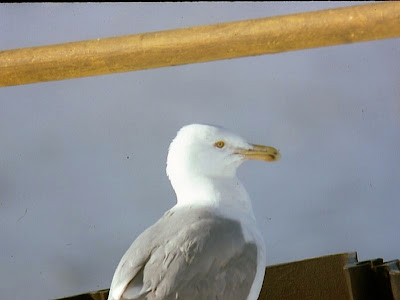 Considered garbage pickers by some, Herring Gulls are big fish eaters. They won't hesitate to pick at a dead carcass either. Adult Herring Gulls have a red-orange spot on the lower bill. Young birds will tap this spot when they want to be fed. Immatures will have a black spot on the bill similar to Ring-billed gulls. 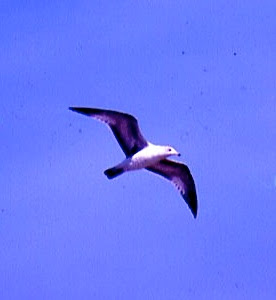 Ring-billed Gulls have plumage similar to Herring Gulls, but they retain the black ring as adults. 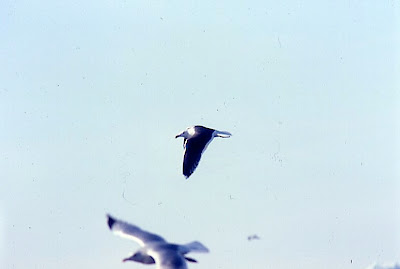 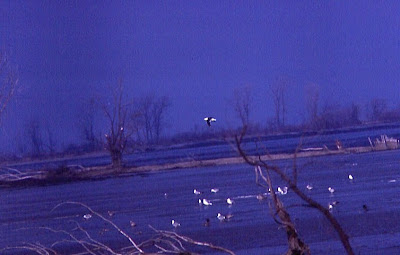 Black-backed Gulls (Greater & Lesser), are larger than the previous two. Their dark black wings offset with the white front and back make this easy to spot among other birds. Just don't call it a Bald Eagle. I never see them down here, but they are not uncommon along Lake Erie. 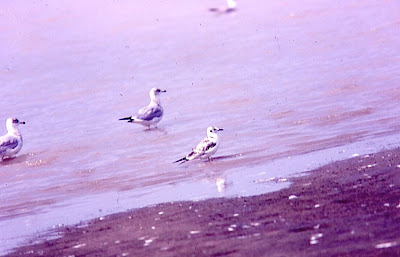 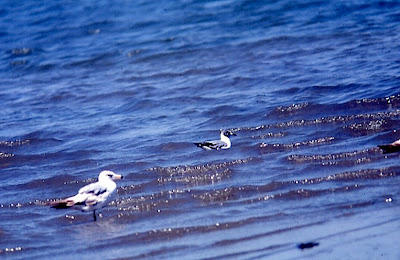 In contrast, Bonaparte's Gulls are very small. Drab in winter appearance, the key feature is the dark spot behind the eye, seen in the upper photo. In breeding plumage the adults will acquire a black head. Another important field mark in flight is a bright white streak on the edge of the wings. 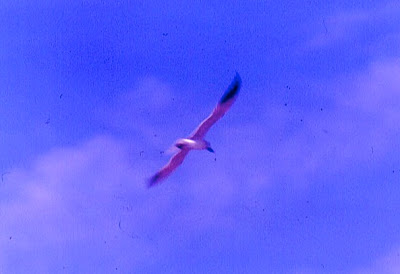 Ya the pic is bad, but I have no other. Thank goodness spring is arriving so I can stop scanning old slides!  So which gull is it? Actually it isn't a gull at all -segue- it's a tern. Terns have longer, narrower wings than gulls, often held at an angle, or boomerang like. Terns have deeper forked tails than gulls.
The bill is much fatter and shorter on this species than most. An appropriate name? Gull-billed Tern. This is found along the Atlantic coast. 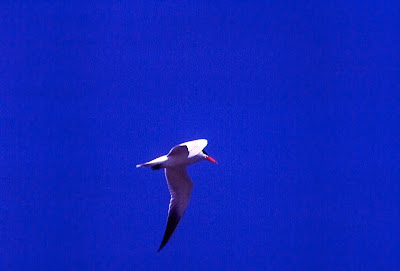 Here's one of the largest species, the Caspian Tern. Easy to recognize by the blood red bill that it often points downward. 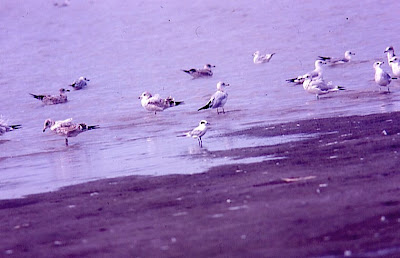 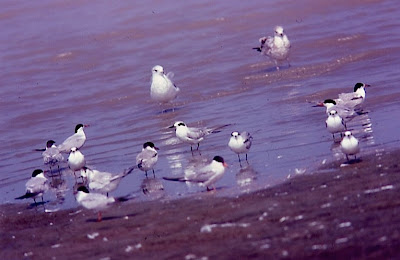 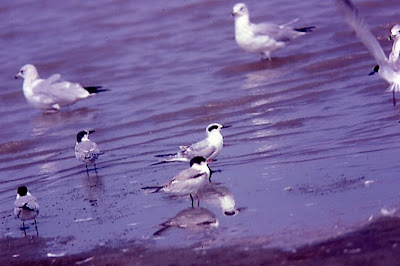 This series of slides contain a number of various species. Draw your attention to the center of each photo. This is a Forster's Tern. In winter plumage it has a dark sash through the eye, and a black bill. In breeding plumage the head will contain more black and the bill will be orange and black. Hope its eyeliner and mascara doesn't run when wet. 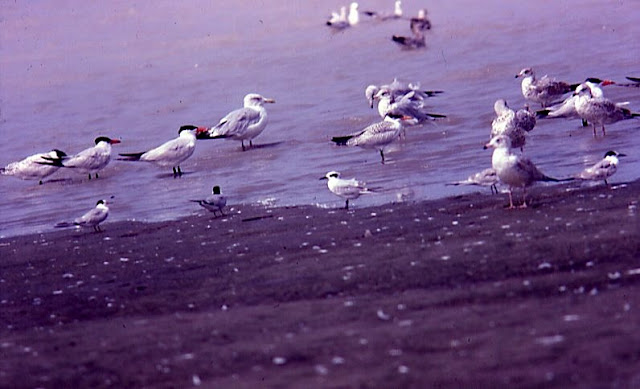 Can you spot them all? Forster's Tern in the middle, mature and immature Herring Gulls throughout, big Caspian Terns on the right and left, and what I believe is a small Common Tern on the left side of the beach. All of these, and many others mentioned above are passing through Lake Logan State Park right now. That place is a hot birding stopover. 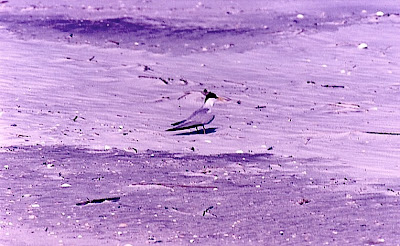 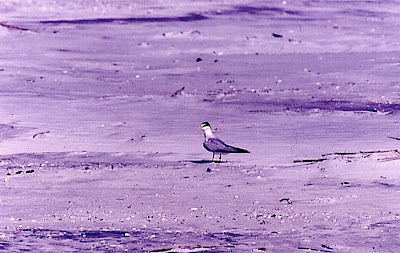 Back to south Florida. I was lucky enough to find this, the smallest of all the species. The Least Tern stands only 8 inches, and is rare to endangered throughout its range. Just the size will give it away, but look for the black streak along the wing edges, or the white patch in front of the eye. Their nesting habitat has been destroyed by beach front development. A former student working down there tells me they are now acting like Killdeers, taking to nesting of the roofs of Walmart.

This post was finished over the weekend, but I hadn't put it up yet. Today fellow faculty member Mark Puhl stopped by my office to show me pictures from his trip to Florida over break. Never being too proud to share other peoples work, I'll end with some excellent shots of a few other birds. 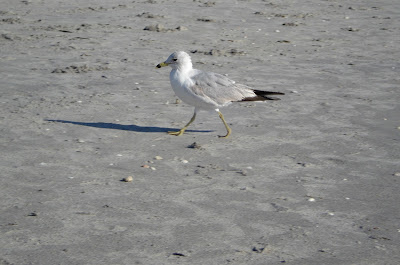 Nice pic of an adult Ring-billed Gull, looking for a hand out no doubt. 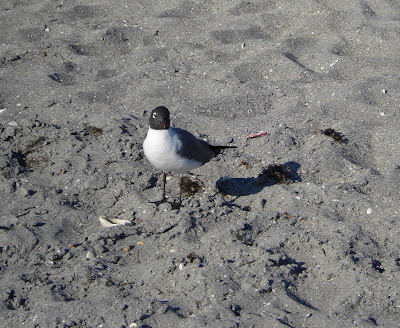 Black-headed gull, white eye ring, and red bill is the common Laughing Gull. You'll just have to experience being around them to understand where the name comes from. 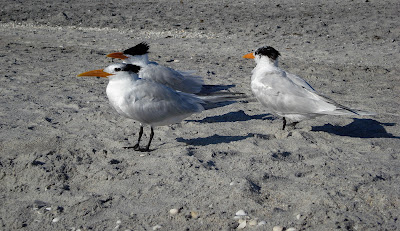 These are Royal Terns. Similar in size to Caspian Terns, their bills are bright orange rather than red. Dig the spiked hairdo. The black behind the head will cover the entire cap during breeding season. 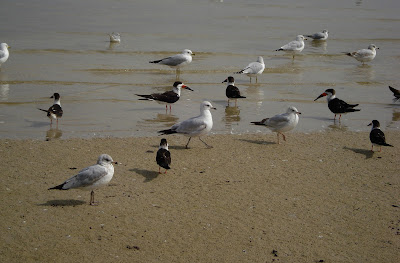 One of my favorites, the Black Skimmer. It has a shorter upper bill. The longer lower bill is dragged across the surface of the water in flight. When a fish hits the bill, it snaps it closed. 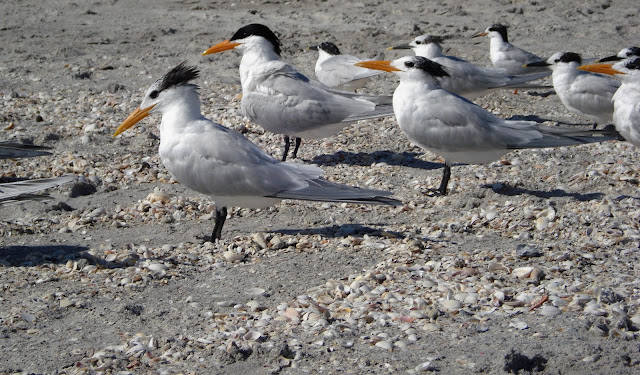 Nice!  4 Royal Terns, behind them are 4 Sandwich Terns. They have the black bills with the yellow tip. In the far back is a Forster's Tern. Changing to breeding plumage, the black dash through the eye now includes more black on the head. The black bill is turning to orange and black.
Posted by DenPro at 6:47 PM