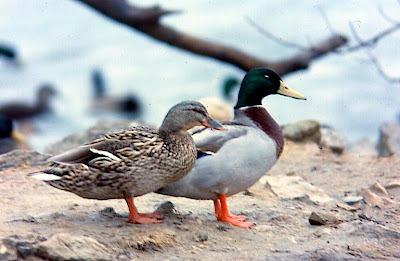 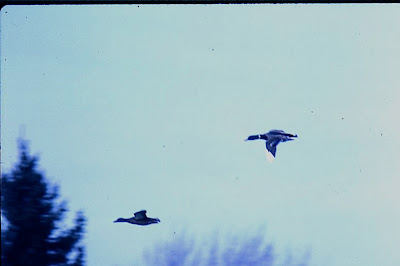 Waterfowl have been migrating in March and will continue to pass through in April. One of the few species that stays in our area to nest is the common Mallard, or in some places known as Farmus domesticus. Like that name? 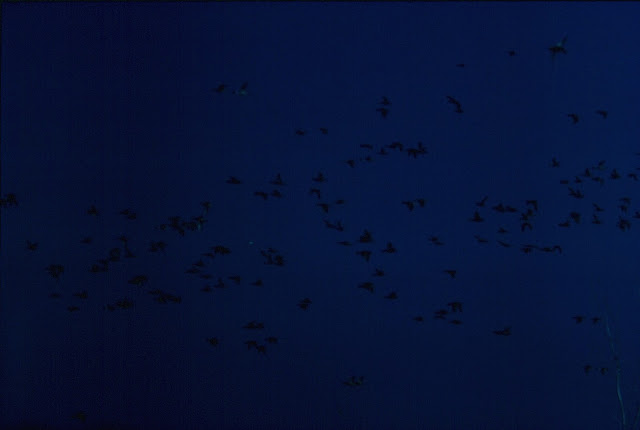 It's a half hour before sunrise, can you identify all these ducks? Better wait for the sun to come up. This is a collection of old slides I scanned for identification in the field. No pretty shots, mostly distant pictures that require looking at key features to figure them out. 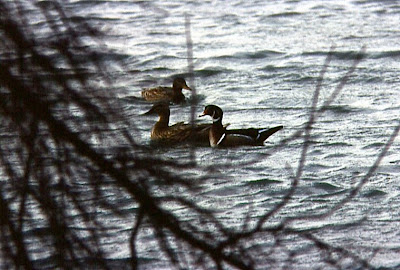 Wood Ducks also nest in our region. As a cavity nester, the establishment of duck boxes, has allowed this species numbers to rebound. 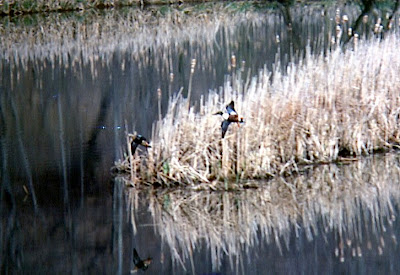 It has a green head like a Mallard. Mallards are light underneath and have a rusty breast (see above). Those colors are reversed in the Northern Shoveler. The shoulders are colored a rich blue. 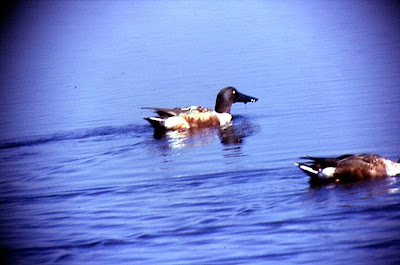 Up close the key feature on the Shoveler is of course the extra large bill.

The green dash through the eyes, the pinkish-orange sides, and the white mohawk distinguishes the American Wigeon, once known as the Baldpate. Those are females on the right. 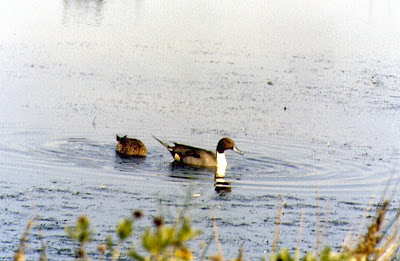 The males have pin like feathers on the tail, how about Pintail for a name. These are very sleek looking ducks. 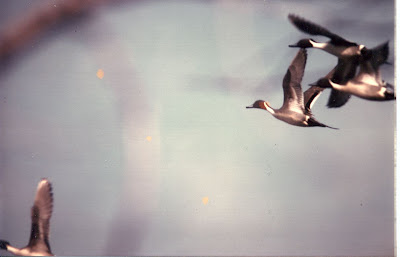 Besides the tail, look for an all brown head with a white streak running from the neck to the side of the head. Ya? And I'm supposed to recognize this?  Long narrow wings, boomerang shaped. Pintails in flight. 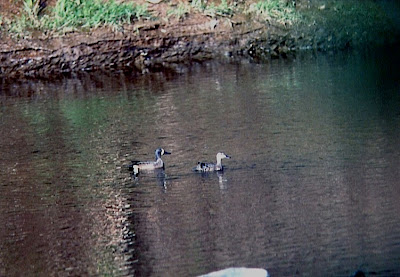 Blue-winged Teal, so where is the blue? It's only visible in flight, besides, you don't need it. The white crescent moon shape in the face, and the white rump patch are all you need. The female, like all females are drab. So when there are lots of ducks around, how do you identify them? Up close they're easy, but when mixed with others, the "cheaters" way is to simply look at who the females follow around.  Most ducks have paired up by the time they reach us. 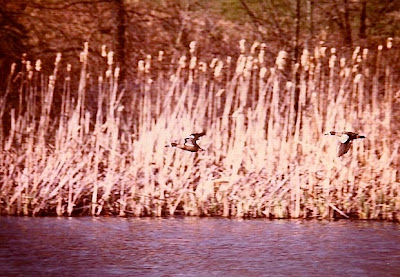 Here's a slide of two males in flight I was able to dig up after all. 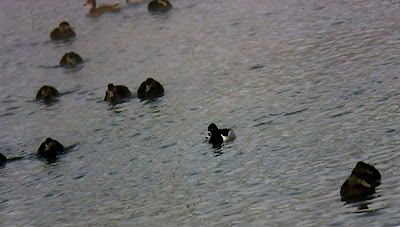 All the dark ducks on the left with the greenish-yellow bills are Black Ducks. Everything we've seen so far are Dabblers or surface ducks. Let's look at some divers. In the middle with the multicolored bill is the Ring-neck Duck. The white gash on the side is an important field mark. The neck ring is never visible. In fact a better name for this should have been 'ring-billed duck'. 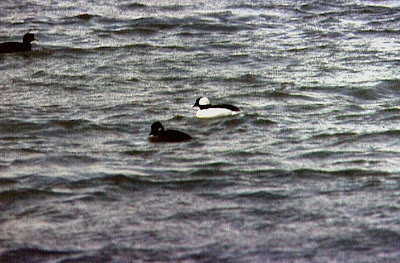 Buffleheads. These little "butterballs" are one of my favorite species. Very small in size, the female sports a little white circle on the face. The contrasting black and white pattern of the males is almost iridescent. If you were to see a duck larger than this, with the same white on the head, it's probably the crest of the Hooded Merganser. 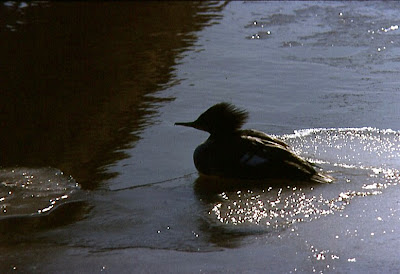 Speaking of mergansers, there are two others besides the Hooded. The American and Red-breasted can be recognized by the primitive saw-tooth bill and spiked head feathers. The females both have a dark neck and breast, but the dark stops abruptly on the chest of the Common, and dissipates gradually to blend in with the breast on the Red-breasted. 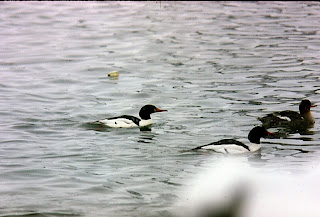 This is the Common or American Merganser. Black and white pattern and a rounded, all dark head. 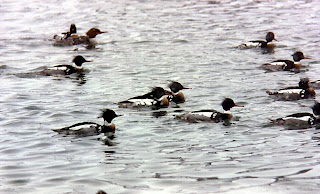 Red-breasted Mergansers have a more mottled or dirty look. The rusty breast is distinct, and the spiked crest separates this from the other species. 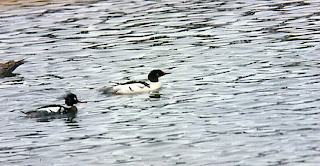 Here are the two for comparison. 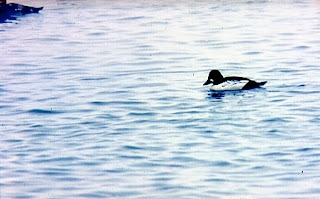 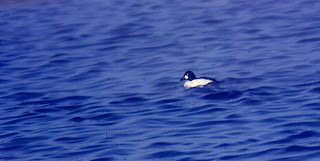 Goldeneyes are also black and white patterned. The yellow eye is obvious in good sunlight, but it's better to look for the powderpuff white spot below the eye. 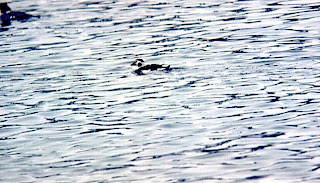 Have you noticed a lot of divers are black and white? How is this different than the one above?  Look at the profile first of all. Then notice the face is white and contains a black spot instead below the eye. This is an Oldsquaw. They also have a pointed tail somewhat like that of a Pintail. Lake Erie is a good place to spot them, as I never see them on shallow bodies of water. 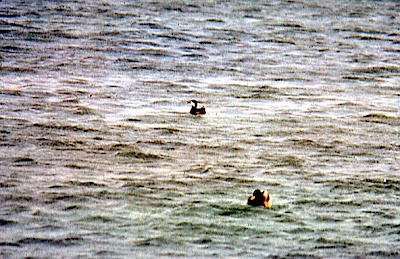 That thing in the middle? But it's just a brown dot!!  Like I said earlier, you don't need close pictures for identifying these. Look how the butt seems cut off. This little duck often holds its "stiff-tail" up in the air. The bill is blue, and 2/3rd's of the face is white. This is a Ruddy Duck. 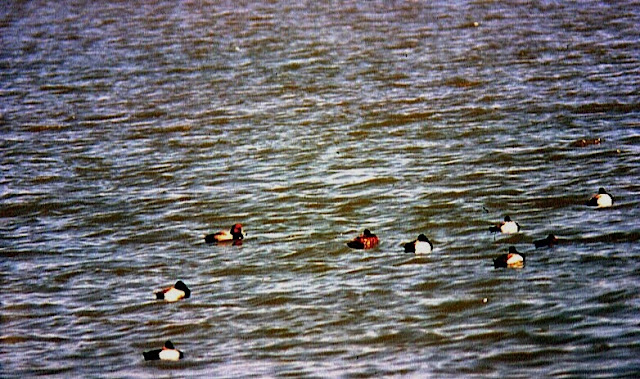 Middle left is a Redhead. Light brown back, two-toned bill, short neck, rounded head. Canvasbacks by nature have a more light gray back, longer neck, black bill, and a squared off or choppy look to the head.  The other ducks are Scaup. Greater and Lesser Scaup are hard to tell apart from a distance. Looking for green versus purple head is not reliable. 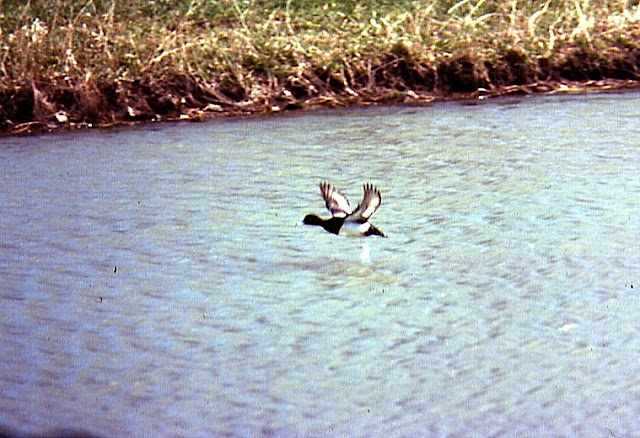 This is a Lesser Scaup. When head color doesn't work, look at the wings. Notice the bright white in the secondaries, and how the primaries turn dark. If this were a Greater Scaup, the white would continue through the whole wing. 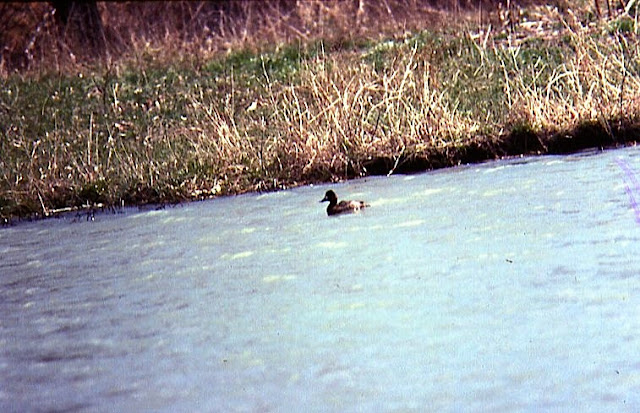 Same goes for female Scaup, otherwise I can't tell them apart. What makes it a female scaup?  I always think they look like someone poured white glue around the base of the bill. 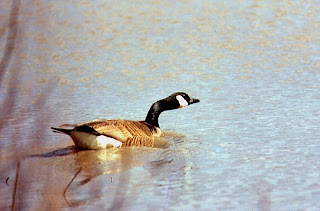 Sky Carp, I mean Canada Goose. Well they are waterfowl, had to include them, even though they are now classified as "nuisance wildlife". I think we all understand why. They have found a year round food source, so they don't need to migrate, and they breed like rabbits. They have caused broken arms and legs for people riding bike paths. They will bite and defend their nest aggressively, even if it's outside a residential office building. Do I even need to mention the amount of what they leave behind in our parks, beaches, and golf courses. Oh well, don't forget, they taste good!  It's the only way to control the population. You can't capture and relocate them. Their homing instinct will allow them to fly right back to the same location. 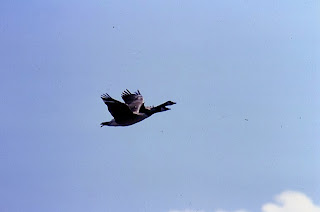 Hey it's a two headed Canada Goose!  Don't call them Canadian Geese, Canada doesn't own them. 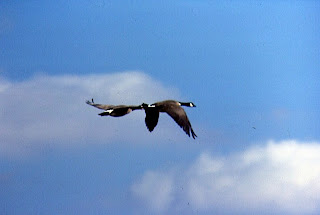 Sticking its head where it doesn't belong!  Okay, so I'm having some fun. 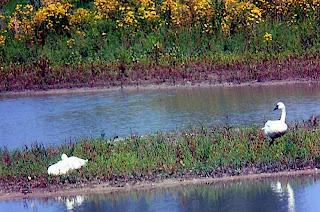 Ducks, Geese, and Swans make up the true waterfowl group. In Ohio the Tundra and Trumpeter Swans are magnificent sightings. These are the ones with black bills. Unfortunately we in education have tried to explain the orange billed Mute Swan is an exotic species not welcome in the wild. They will chase out our native species. I have known people who will protect Mute Swans, and ecologists be damned. Some people think state parks and other such areas are their personal petting zoo. I suspect they went to the Walt Disney school of wildlife management. (Sarcasm intended). 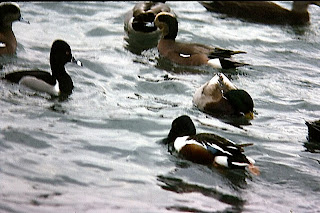 Since so many species nest north of Ohio, get out and enjoy them while they are passing through. Too bad I didn't have a wide angle lens. Both in the air and on the water, biologists estimated we were looking at 25,000-30,000 ducks here at one time. Birding is fun.
Posted by DenPro at 5:46 PM