Have you ever noticed when you subscribe to magazines they always come a month earlier then they are dated? April isn't here yet, but it's just around the corner, so here's a batch of plants to look for during the next month. 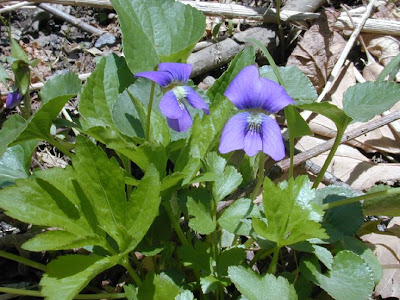 This is Common Blue Violet, Viola sororia. As much as I want to believe I've found other blue species, they always turn out to be this common one. There have been other latin names associated with this plant, but they all tend to be just varieties of the same species. Violets have uneven petals on top versus the bottom. Look for a beard or hairs near the center on the lower petals. For the Newcomb gang, this means they key as irregular flowers. Most have round to heart shaped leaves that are slightly serrated. 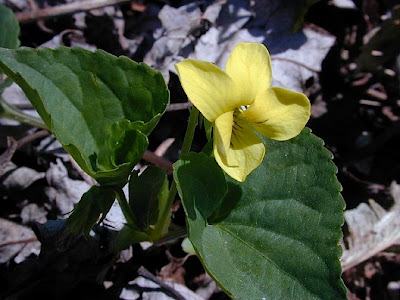 Many of the violets in our area are easily separated by their color. They're not all violet. This is the Yellow Violet, V. pubescens. Sometimes called either Smooth or Downy Yellow, based on whether it's hairy or glabrous. Once split into two species, they have since been combined. 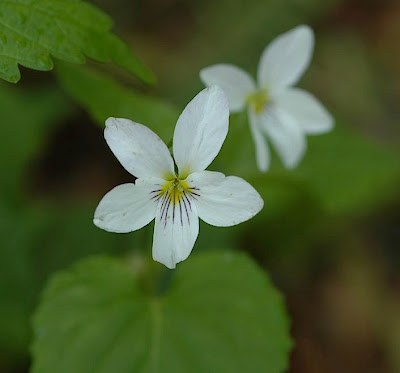 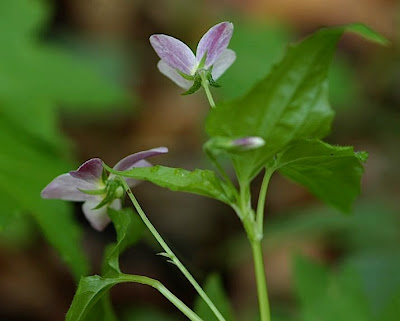 Canada Violet, V. canadensis, is one of several white species in our area. Look for the bright yellow throat from the front, and the purple tinged petals from behind. Also notice the jagged stipules along the stem. They are quite small in this species. 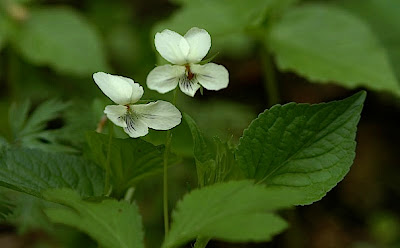 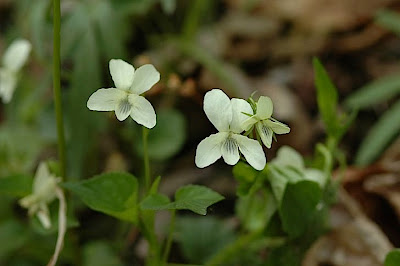 Sporting the same purple stripes in the lower petals as Canada Violet, the Pale or Creamy Violet, V. striata, has a much duller look to the white, sometimes with almost a yellowish-white look.  It lacks the bright yellow in the middle and has no purple underneath. While not visible in the picture, the stem stipules are heavily toothed and much larger than the previous species. 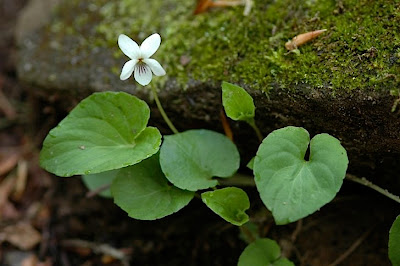 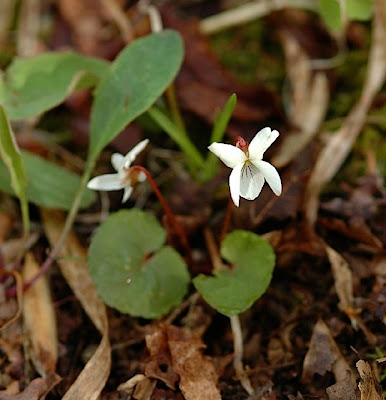 Sweet White Violet, V. blanda. So how is this any different from the last two? When you see it you'll know. It stands only a couple inches tall. It's especially common on damp rocky outcrops. The stems often turn red with age. The seed capsule is purple. The seed capsule is green in the Northern White Violet V. macloskeyi, which it may be confused with. The latter is found only in the extreme north eastern corner of Ohio. 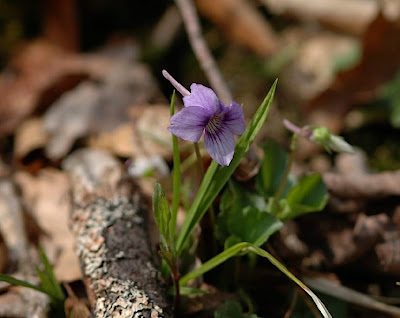 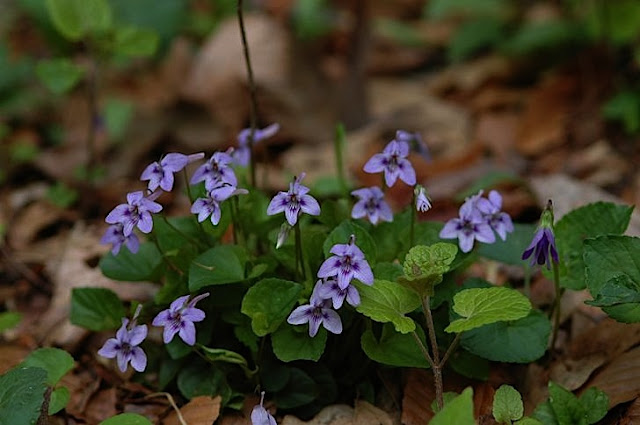 Because of it's mix of lavender, blue and purple, the Long-spurred Violet V. rostrata, is one of my favorites. It can commonly grow in large patches like this. Look for the extra long spur protruding out the back of the flower. 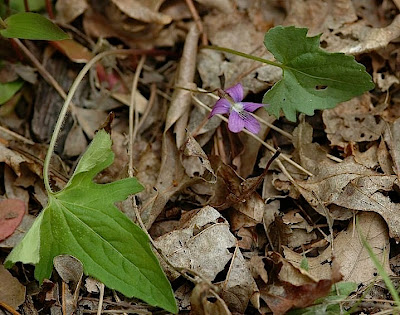 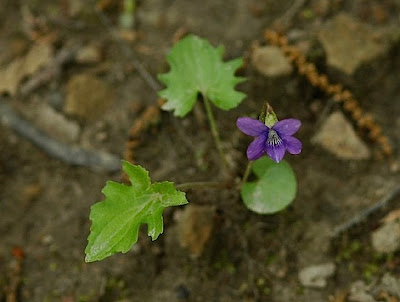 Viola triloba, the Three-lobed Violet. Now this one has always confused me. It looks just like V. palmata, at least to me. In fact some authors have combined the two. It's nice having a violet expert just down the road. So I contacted Harvey Ballard, and he does distinguish between the two.

In triloba, the leaves usually have 3-5 shallow to medium lobes in the lower portion, with the upper part of the leaves remaining unlobed.  In palmata, the leaves are so deeply lobed as to nearly reach the center vein. In the second picture you will notice an unlobed leaf, typical of triloba. In palmata all leaves are lobed. V. palmata tends to be rare in Ohio, but triloba is common here on dry oak hillsides. 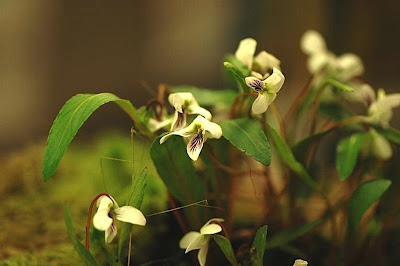 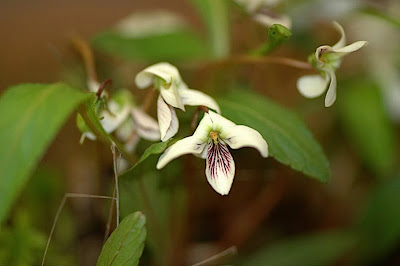 Here's one to keep a lookout for. This is Narrow-leaved Violet V. lanceolata. Notice the long strap like, unlobed leaves. I've seen it in Florida and also in the bogs of Michigan. It occurs along Lake Erie and a few counties in S.E. Ohio, but I've yet to find it here. 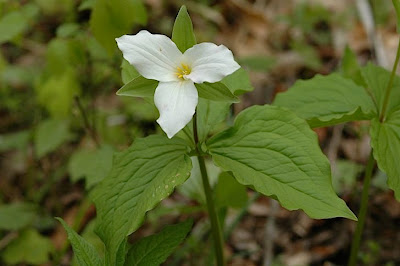 Oh we have to throw a few trilliums in for good measure. Here is the most common one in our area, the Large-flowered Trillium, Trillium grandiflorum. No wildflower walk would be complete without seeing this. 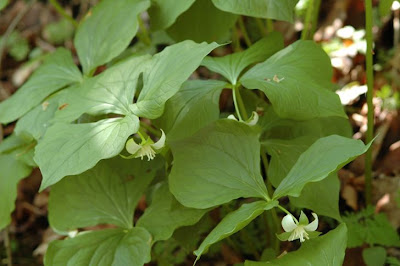 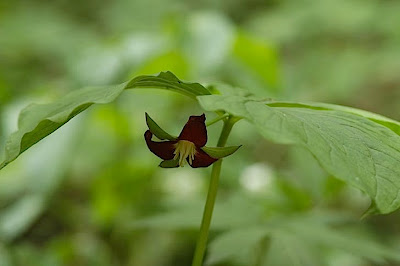 Less common is the Drooping Trillium, T. flexipes. The very broad leaves hide the flower below. It occurs in both white and red. It looks very much like the Nodding Trillium, T. cernuum, but that species does not occur here. 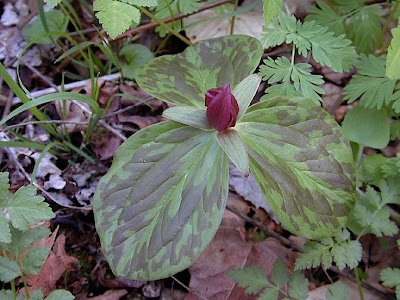 Staying close to the ground is the common Toadshade, T. sessile. Less showy, but still with sepals, petals, and leaves in 3's, it's a trillium none the less. I have yet to find the Prairie Trillium. It looks like this, but has stalked leaves and downward pointing sepals. 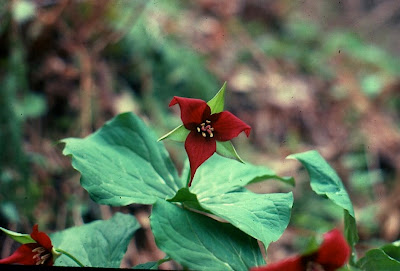 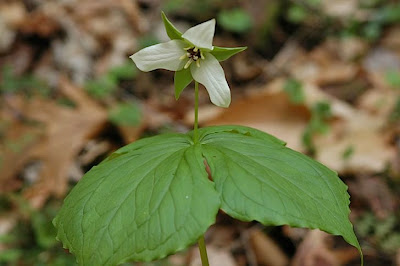 My favorite? But of course, the Wake-robin or Red Trillium, T. erectum. They occur in both red and white forms. These were slides I took some 30 years ago outside of Conkle's Hollow. Since then I have failed to relocate this population. 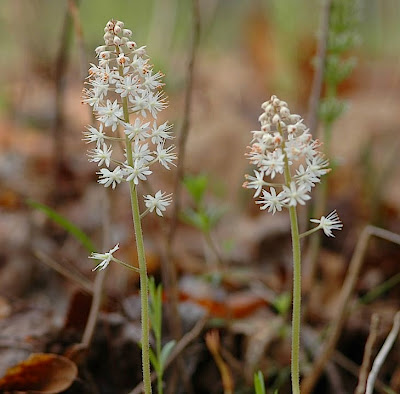 For those out tromping the region in April, here's a few more species to look for. The Foamflower or False Miterwort, Tiarella cordifolia. It appears to bloom without leaves, but they branch off the base of the plant and are quite broad and fuzzy. This species can blanket the forest floor. 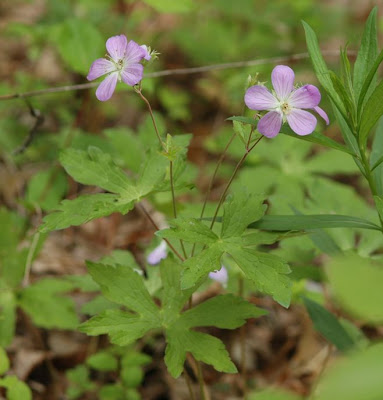 Wild Geranium, Geranium maculatum. These are very common in our woods and along roadsides. Look for the highly dissected leaves. 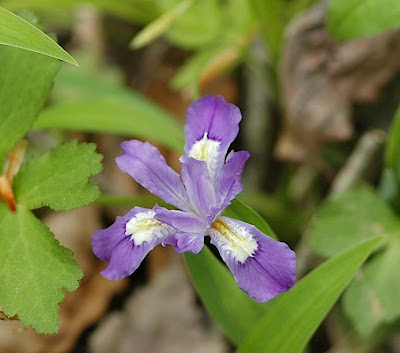 Many of us have seen the Large Blue Flag growing in flower gardens, but this is a very small species I have found in bottomland wet soils. The Dwarf Crested Iris, Iris cristata, is the more frequent one seen in Ohio. Iris verna, the Dwarf Iris is threatened and found in Adams and Scioto counties. It's flowers contain more orange than this species. 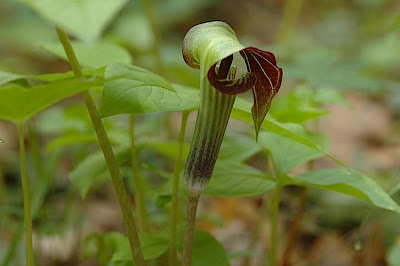 If there was ever an unmistakeable flower, it's that of the Jack-in-the-Pulpit. Jack is seen standing preaching in the pulpit with a canopy over his head. Open the lid up and you'll see the inside striped in purple and green. The three species commonly illustrated in older field guides have been lumped into one, Arisaema triphyllum. 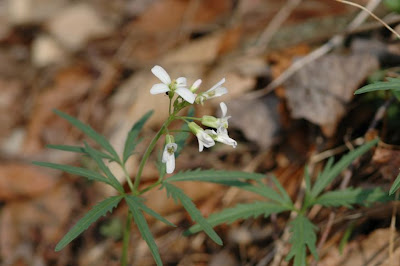 Mair-he-juana?? Hardly. This is Dentaria or Cardamine, depending on who you follow. The four petaled flower puts this in the Mustard family. Commonly known as Cut-leaved Toothwort, it is abundant in most woods. 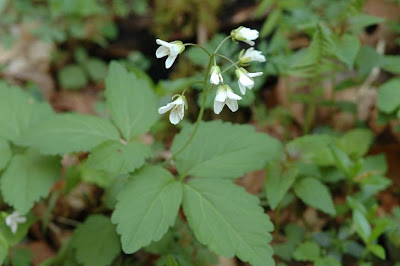 Often found together with the above species, but overlooked because the flowers are similar, is the Large Toothwort. The leaves are in threes, but much broader. 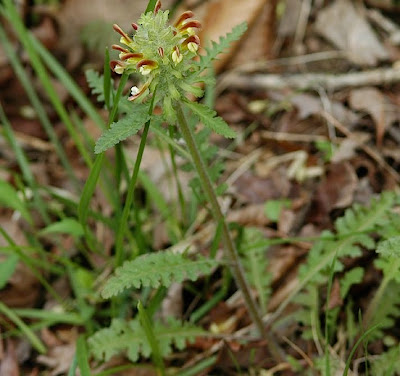 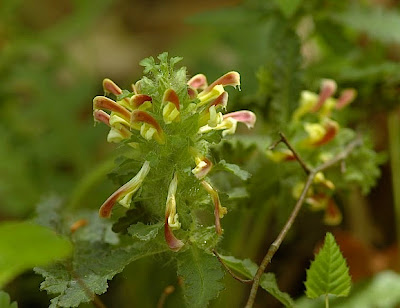 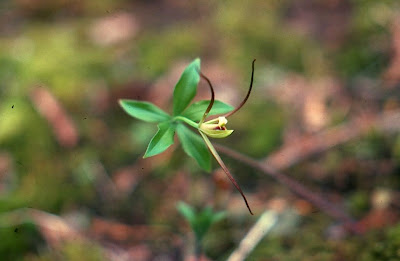 This beautiful looking species is the Large Whorled Pogonia, Isotria verticillata, an orchid recognized by the whorled leaves, purple stem, and long purple sepals.  From this angle it looks like a snake rearing back to strike. Don't mind me, I have an imagination. Chances of seeing it's relative, the Small Whorled Pogonia I. medeoloides, is unlikely. It is one of the most endangered orchids, and the only healthy population in Ohio is in a small area in Hocking County.
Posted by DenPro at 12:01 AM