Intimidated by all the warblers and other small songbirds? If you're a beginning birder, it's always nice to start your life list with the bigger birds like herons, egrets, and other easy to watch water birds. These species are primarily fish eaters, but will eat amphibians, reptiles, crustaceans, and on occasion ducklings and even mammals. 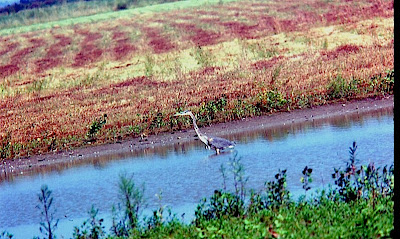 Great Blue Herons are by far the most common, and the largest of wading birds in Ohio. The back is more gray than blue. The head is black and white, and the bill is orange. The size alone should distinguish this from any other bird. 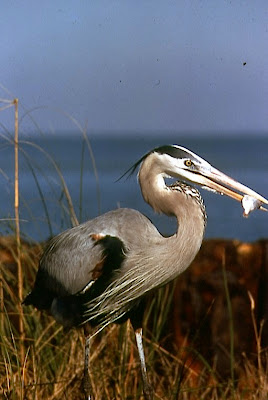 Great Blues nest in colonies or what is called a rookery. I've seen rookeries with nests numbering nearly 100 at Salt Fork, Buckeye Lake, and the Sandusky marshes just to name a few. This nice closeup is a borrowed picture. 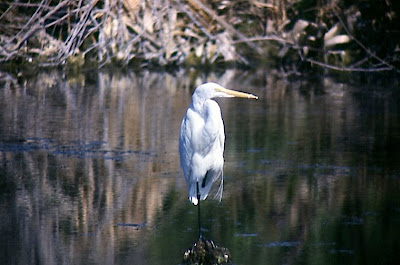 "We have an albino heron in our yard". A commonly heard statement from non-birders. This is actually the Great Egret, sometimes called the white egret or American egret. This is a frequent bird in Ohio, standing just slightly smaller than the great blue, it's legs and feet are black. 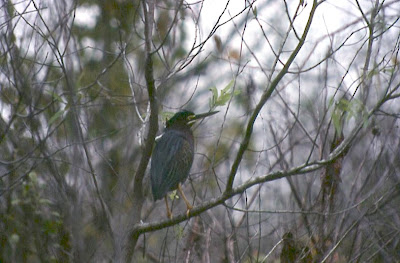 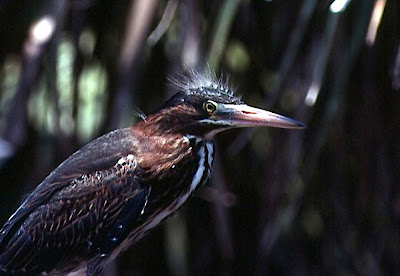 Unlike the previous two species, the Green Heron or Green-backed Heron does not like to wade in the water while hunting. Standing only a foot and a half tall, it prefers to sit on a branch or fallen log and wait for it's prey to come near shore. The Green Heron is a "true fisherman", often tossing little things into the water as bait to lure it's prey closer. This is a common species in Ohio, nesting on low branches near the water. 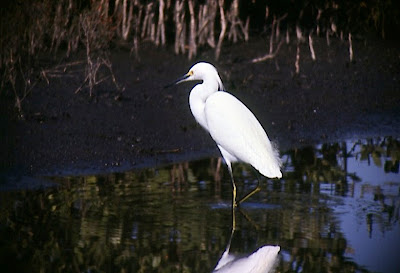 Intermediate between the green heron and great egret size wise, is one of my favorites, the Snowy Egret. Occasionally passing through Ohio, look for the black bill and yellow spot in front of the eye. In my opinion, the sleek, silky appearance to the white feathers is more showy than in other species. 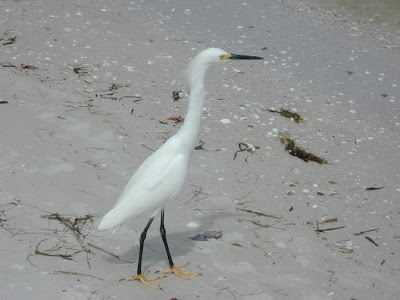 When walking outside the water, the distinguishing character of the yellow feet, or "golden toes" separates this from any other water bird. 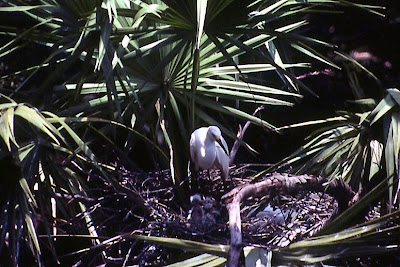 Snowy Egrets also nest in colonies. They use sticks for the nest, and usually build them is thick shruby areas for concealment. Snowy Egrets, like many of the herons and egrets suffered major population declines in the late 1800's because hunters sold their feathery plumes for use as fancy hat decorations. 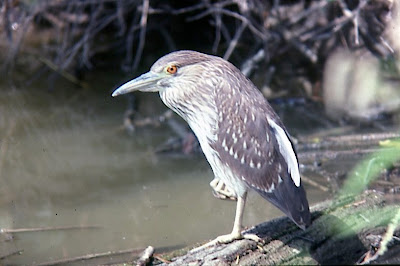 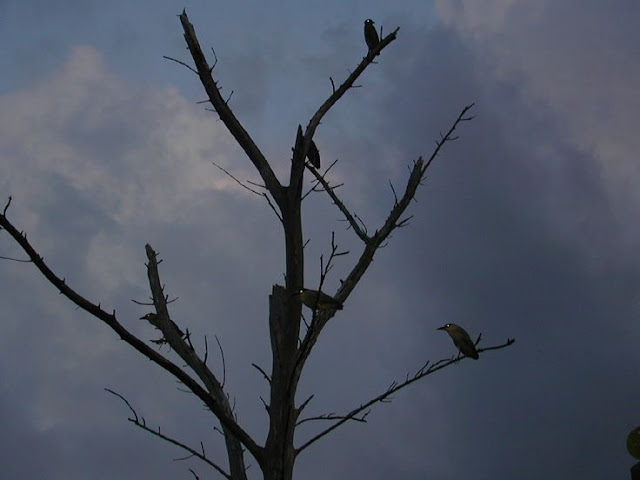 I love this look of illuminating eyes on the Black-crowned Night Herons. Taken at dusk with a flash. 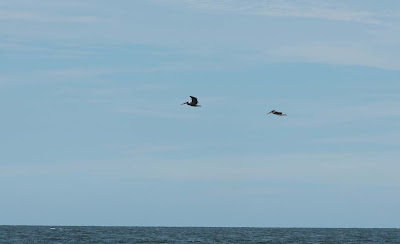 While living in Florida for several years, I had the opportunity to find a large variety of other water birds. While Great Blue Herons may be our most common species, the coastline is abundant with the classic Brown Pelican. Flying in lines along the beach, they suddenly dive underwater to catch fish. 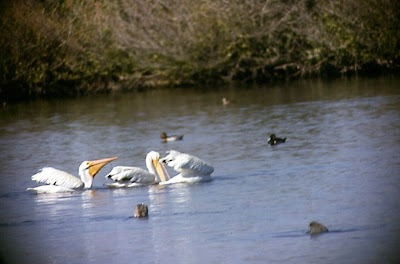 While nesting in the western states, the White Pelican winters along the coastline. Pelicans are easily recognized by the large pouch under the bill. White Pelicans often feed in groups, and all of them may dunk their heads underwater at the same time. These do pass through Ohio on occasion, and have been seen at places like Salt Fork State Park. 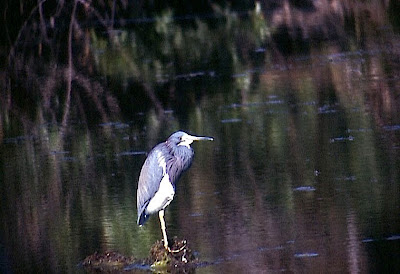 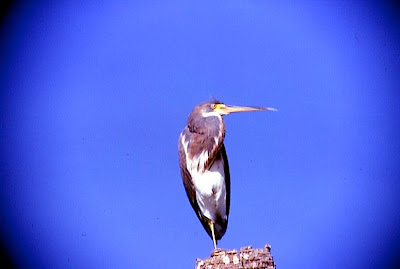 The Tricolored Heron of the south sports a blue-gray or blue-purple back, white undersides, and a white stripe down the front of the neck. Also look for the two-toned bill. This is a medium sized heron. 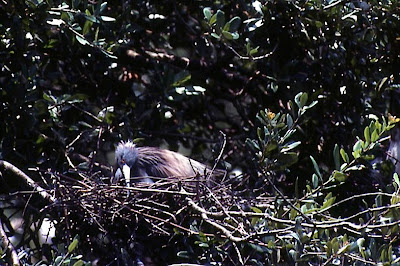 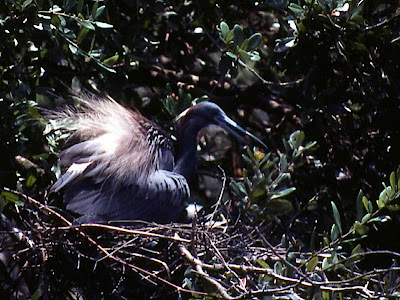 Tricolored Herons build a stick nest in trees. The male selects the sight but both will incubate the eggs. 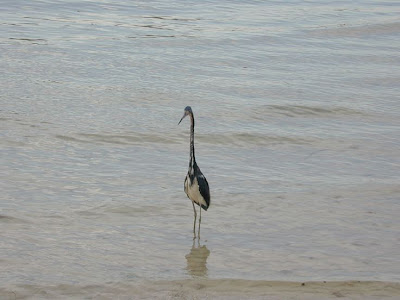 "Gag, I thought I swallowed a snake, how'd I know it was an umbrella handle". Tricolored Herons are often described as having very long slender necks. 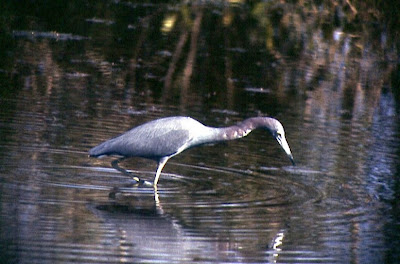 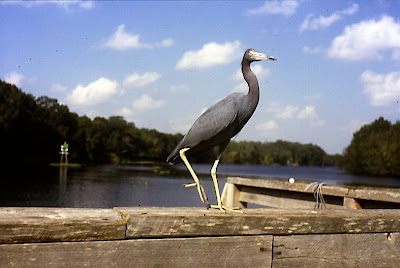 As the name denotes, the Little Blue Heron is one of the smaller species in the south. The plumage is all blue, and the neck is more purple-blue. The legs are yellow and the bill is tipped in black. The color and size make the adults easy to identify, BUT the young will be all white. Some other species in the south have all white young as well. Immatures can usually be picked out from others by the size, leg color, and black tipped bill. 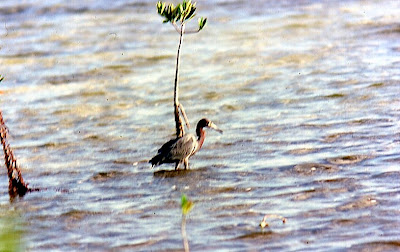 Another one of my favorites is the Reddish Egret. It has a blue-gray back and reddish neck. They are fun to watch feeding in shallow salt marshes. The bill can be either two-toned or solid black. 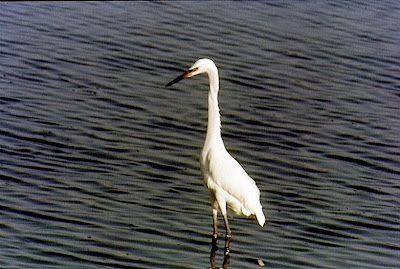 This is a white phase morph of the Reddish Egret. They are medium sized birds. 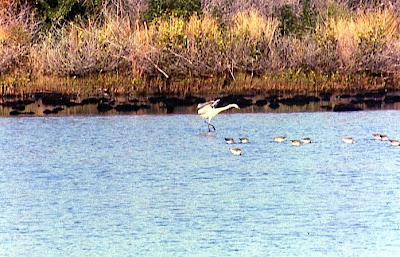 The most interesting thing about the Reddish Egret is the feeding behavior I mentioned earlier. They jump and hop around the water as if they are avoiding being bitten by something. They agitate the water on purpose, making fish uneasy. Then suddenly they spread their wings and create a canopy of shade. Fish, liking dark areas, will swim to this spot, and the heron then feeds upon them. 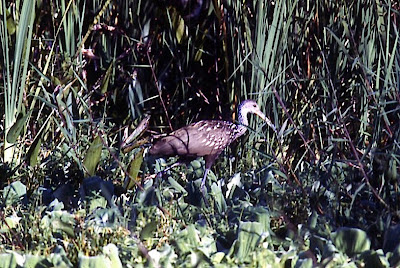 More closely related to the Cranes is the Limpkin. A solitary bird of freshwater marshes and swamps, it is drab brown with lots of white mottling. While it will feed on various molluscs, it's primary diet is heavily dependent on Apple Snails. The abundance of apple snails, or lack thereof, determines whether or not Limpkins will be present. Their curved bill is ideal for extracting the meat from snail shells. Once considered a threatened species in Florida, their populations are somewhat stable today. They are very slow walkers, and tend to bob from one side to the other, as if walking with a 'limp', hence the name. 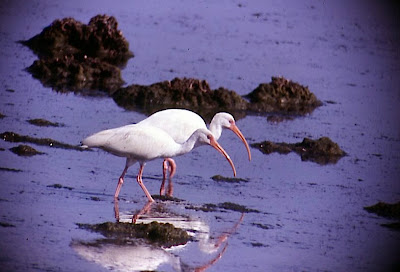 With their long curved bills and particular feeding behaviors, members of the Ibis family look like oversized shorebirds. This is the White Ibis. All white with pink to orange legs and bill. In flight the edges of the wings are black. White Ibis frequent the coastline and feed with a back and forth motion of their bill, much like that of Spoonbills. In the water they feed on crustaceans, and on land they seek out frogs and insects. Immature White Ibis are brown.  In south Florida, the all red Scarlet Ibis, an introduced bird, has been known to hybridize with White Ibis. 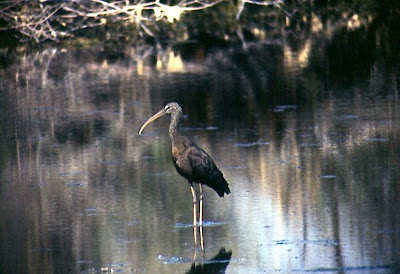 Another common species in Florida is the Glossy Ibis. In the off season the feathers are dull brown. In breeding season they will be brown to reddish brown, and with a lustrous sheen, as if covered in oil. Like many water birds decimated by DDT, this species has rebounded and extended it range clear up the Atlantic coast. 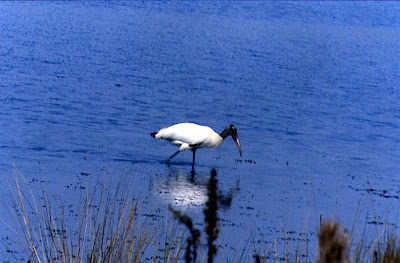 The best way to top off any birding trip in south Florida is with this rare species, the Wood Stork. A very large wading bird with a five and a half foot wing span. It's all white with a thick long bill, and black neck and head. The head is bald like that of vultures, which they are more closely related to than we once thought. It has black on the wings in flight, and holds its head outward, but is much bulkier than a Sandhill Crane. 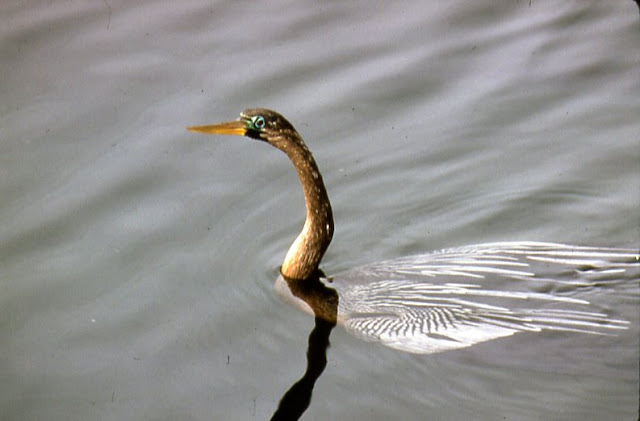 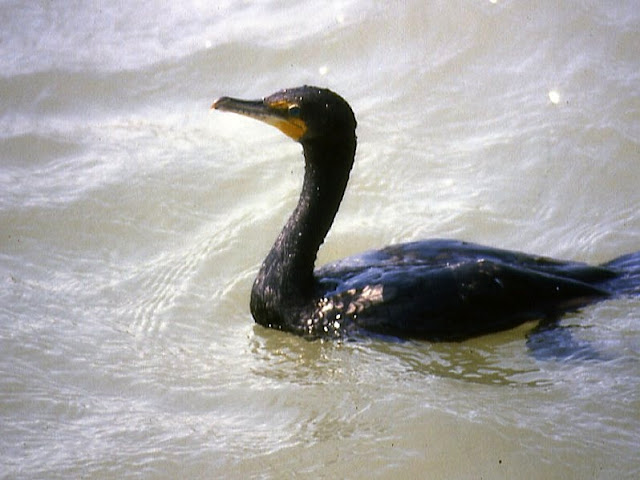 A couple of wonderful shots I had to stick in from Fred Bavendam, whose pictures we used a lot of for programs at our park many years ago. The first is the Anhinga, sometimes called a Water-turkey or Snakebird. It swims with it's silvery body feathers underwater, and only its neck sticking out.  They pierce fish with this beak, and often have to return to shore to pry off the stuck fish. They often perch on logs or rocks and spread their wings out. In doing this they look similar to Cormorants. You can see the Double-crested Cormorant has yellow on the face, not black, and no distinct eye ring. A Cormorants bill is hooked at the end. Anhingas have a straight bill.

Cormorant populations have sky rocketed in recent years, causing fishermen in the Great Lakes to accuse them of eating many popular game fish. Research does not bear this out, as they prefer totally different species. A much bigger problem is when they roost in large numbers. Their feces is so acidic, they kill the trees they sit in.
Posted by DenPro at 8:44 PM