Pine Communities of the South 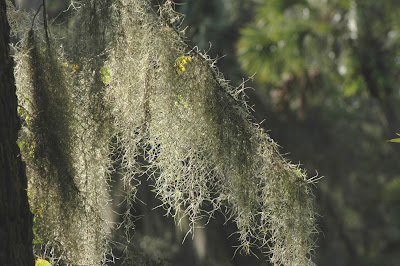 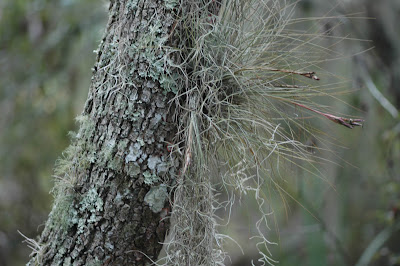 When traveling from the midwest, there is no better indicator to know you've 'arrived' in the south than the Spanish Moss hanging from trees. Upon closer examination of the woods other similar plants can be found. The second one is Wild Pine or Tillandsia fasciculata. These are Bromeliads or "Air Plants". They attach to trees and gather their nutrients from the air and rain water. 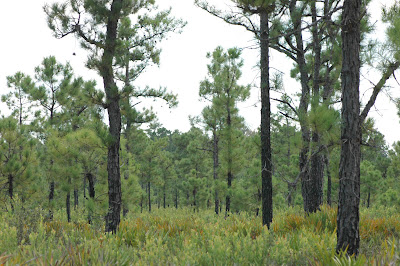 To the untrained eye, this Pine Flatwoods community looks perfectly normal. Yet this is not what they looked like historically. The important species here is Slash Pine, Pinus elliottii, but the understory has been overrun by Saw Palmetto and Lyonia shrubs. 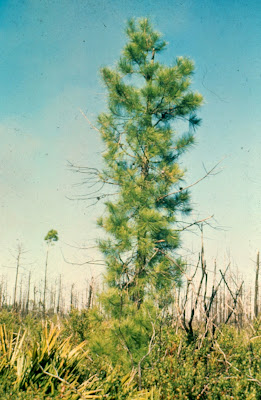 Pine Flatwoods are fire dependent communities. Florida has more lightning strikes than anyplace in North America. This is how many communities were created. In our modern age we have eliminated fire because we interpret it as bad or dangerous. Most of the pines in this picture have died of old age, and there is no room for seedlings to take hold. Today we better understand the role fire plays in maintaining forests and other ecosystems. 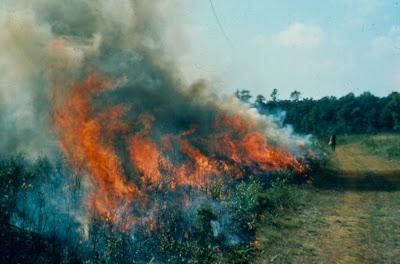 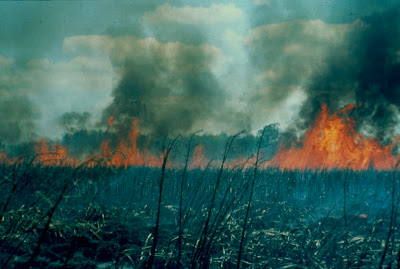 Set it ablaze. Fire kills the invading woody species and opens up the understory for grasses and wildflowers. Below are photos of some of the more common species to look for. 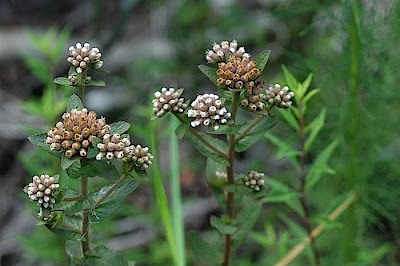 Florida Everlasting or Camphorweed. I'm not certain of the exact name, but I think this is a Pluchea species of some sort. 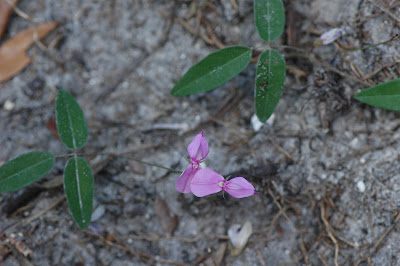 Downy Milk Pea, Galactia volubilis. As you can see it prefers open sandy areas, which are not available when woody plants dominate. 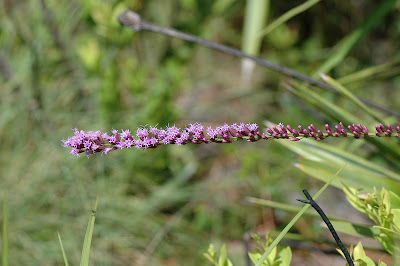 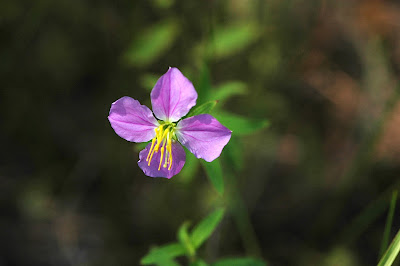 Rhexia mariana, Meadowbeauty. Another common species here is Rhexia nuttallii. It looks similar but has serrated leaves, and its flowers bloom upright, not to the side. 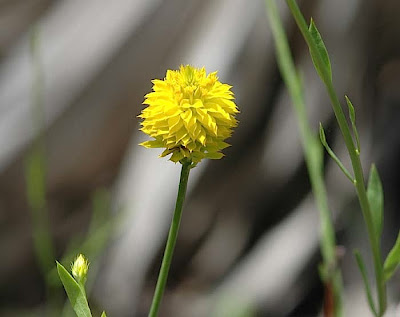 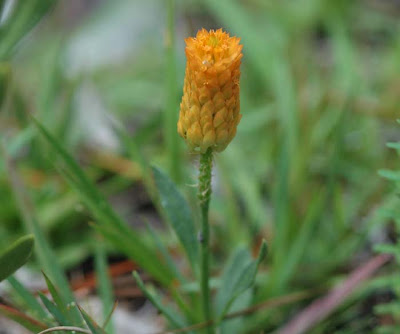 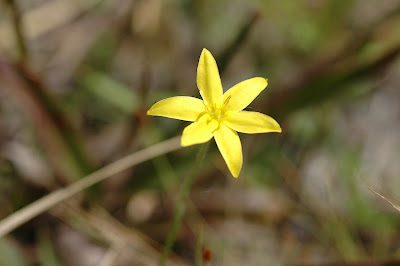 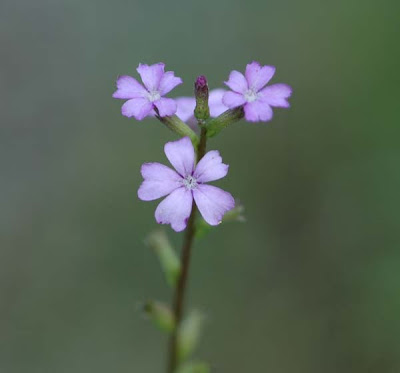 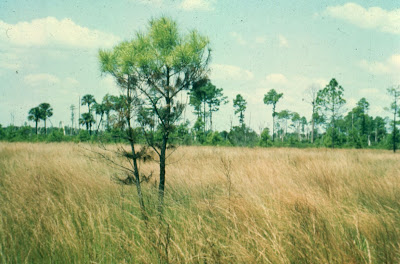 Here is an area subjected to repeated burning. The woody shrubs are gone and grasses dominate. 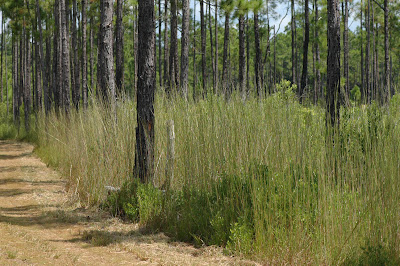 Andropogon or Big Bluestem is one of the desired species in the flatwoods. 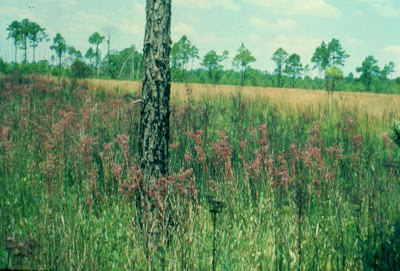 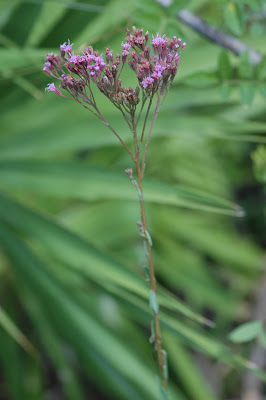 On the outskirts of the burn, more wildflowers can be seen. This is Carphephorus odoratissimus, the Deer Tongue or Vanilla Plant. 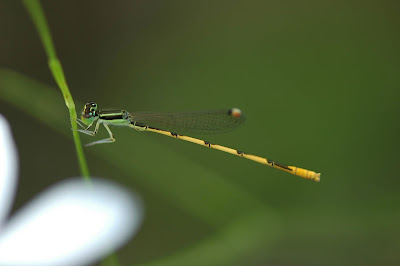 Some interesting critters were also found on the area. This damselfly is the Citrine Forktail. 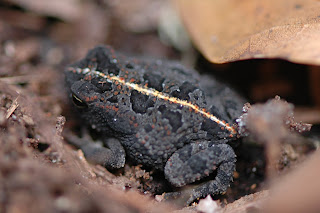 Another common inhabitant is the Oak Toad, Bufo quercicus. Recognized by the four black spots in the middle of the back, rusty orange marks scattered about, and the yellow-white stripe. This guy was trying to burrow and hide among the leaves as I approached. It's our smallest toad, reaching only 2 inches in length. 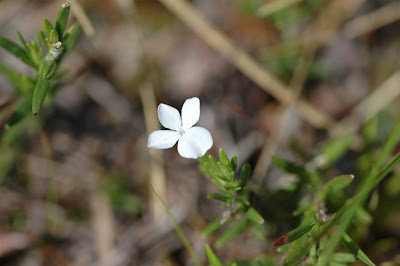 Hedge Hyssop, Gratiola hispida. This small 3-6 inch plant was found only on the open areas such as grassy roads and fire break lines. 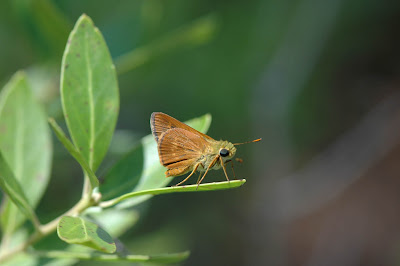 Buzzing rapidly among the Lyonia  and Gallberry bushes (Ilex glabra), was this butterfly, the Southern Broken-dash Skipper. 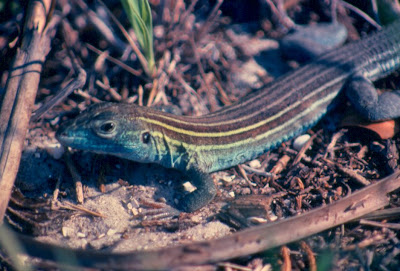 Lizard species are abundant in Florida. This is the Six-lined Racerunner. Due to the fact that many Flatwood communities are lowland areas, racerunners prefer hot drier sites like that of a second community known as the Sand Pine Scrub. The scrub is dominated by Sand Pine (Pinus clausa) and three shrub species of oak. 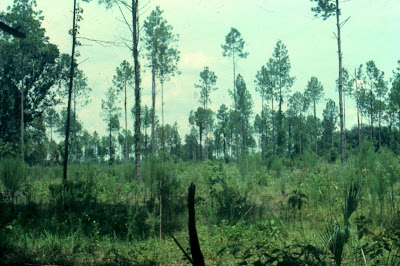 A third pine community is known as a Sandhill. Also more upland and dry, the indicator species of this site are Long-leaf Pine, Turkey Oak, Bluejack Oak, and Wiregrass. So how do we really know what these areas looked like in the past?  An early naturalist named Bartrum mentioned in his journals hundreds of years ago that these areas were "dominated by pine trees with tall grass in the understory that bison would graze upon". Buffalo in Florida? Who would have figured. 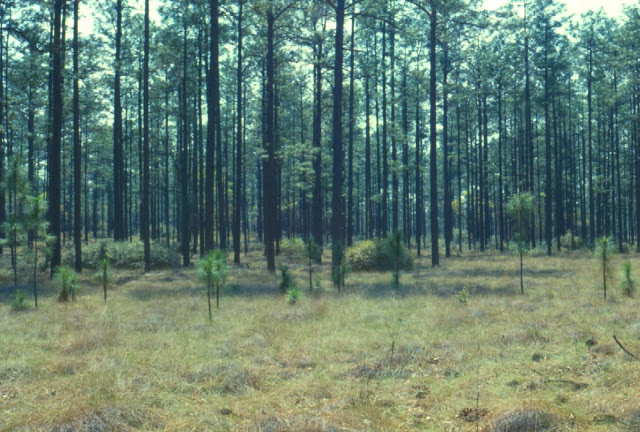 Here is the way Long-leaf Pine forests should look, with an open understory. Long-leaf grows in a ball or grass stage for several years, gathering nutrients, then suddenly growing 5-10 feet in a sudden burst. This is so when ground fires occur, they have reached a height that the fire won't harm them.
In conclusion, biologists and ecologists have learned the value of fire as an important resource management tool. The picture below says it better than any words can. The right side is what happens when fire is removed from the natural cycle, and the left side of the break is where fire has been reintroduced. 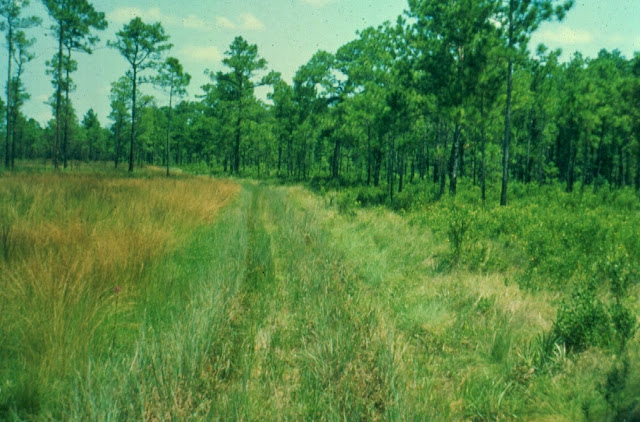