I have busted my brain trying to come up with an easy key that works in the field for these guys, and I just can't do it. I have failed, I'm worthless, it's over, I quit, the world is coming to an end.

But then the more work I do looking these up, the more I read; this resembles that, this looks exactly like that, these two can't be separated, these hybridize, the genus and species need revised, etc.  Okay, now I don't feel so bad, so on with it.

PLANTS WITH OPPOSITE LEAVES (for the most part). What? Didn't he say for the most part once before?  Yep, just covering my butt. Some are both alternate and opposite. Now you see why a key isn't easy.

Plant with opposite leaves that reach around and form a cup (perfoliate)
Cup Plant, Silphium perfoliatum 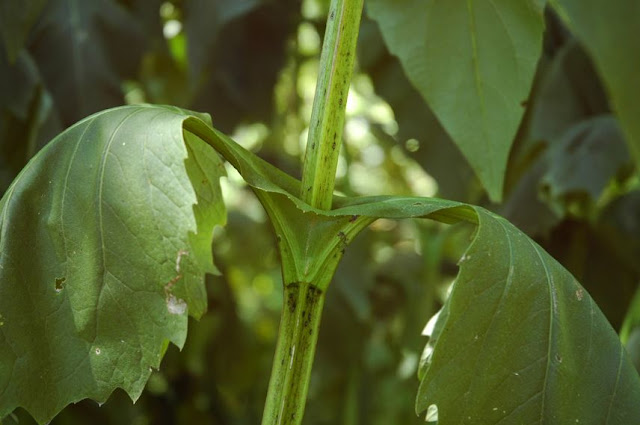 While occurring on prairies, Cup plant it is commonly found in our area on floodplains. The cup will often be found full of water. 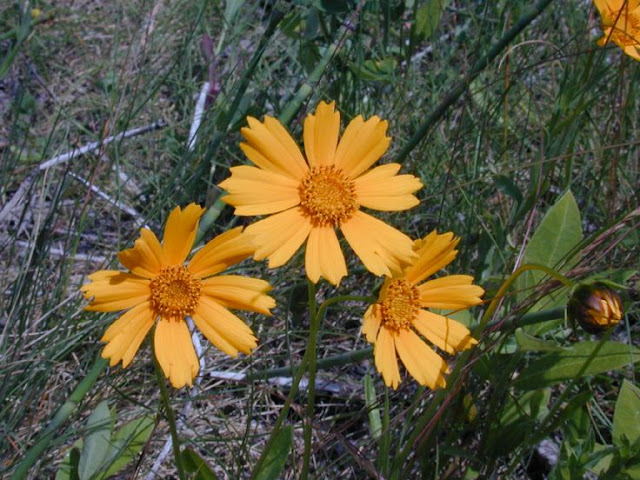 Lance-leaved Coreopsis is widespread in Ohio in many habitat types. Because it only grows a couple feet tall, it is frequently cultivated. 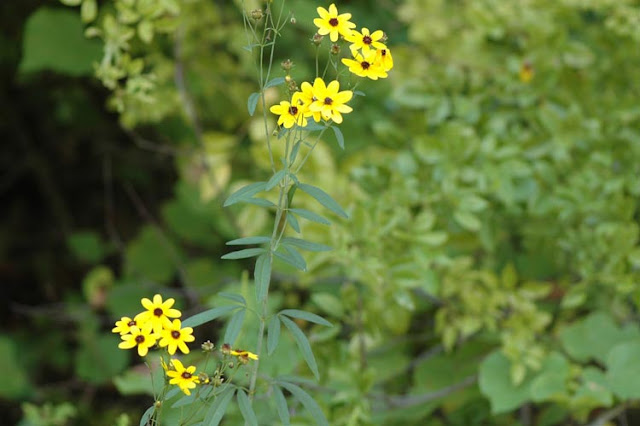 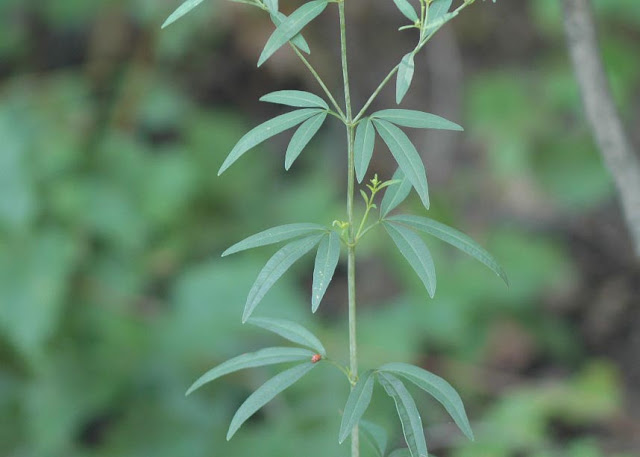 Tall Coreopsis is a common prairie species. I have seen it used a lot in seed packs when reclaiming disturbed sites.  It has no problem reaching 10 feet. These plants are special, they're even taller than the trees. 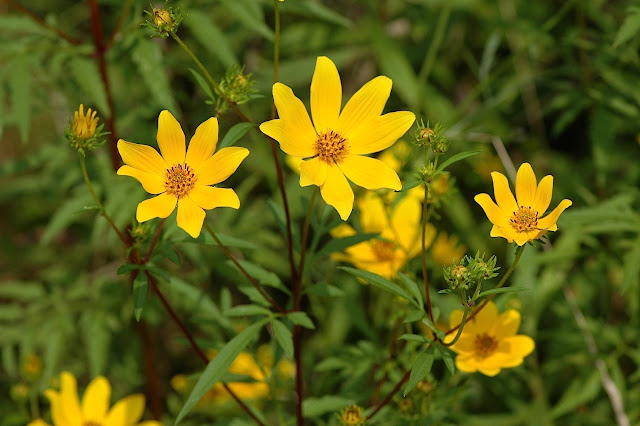 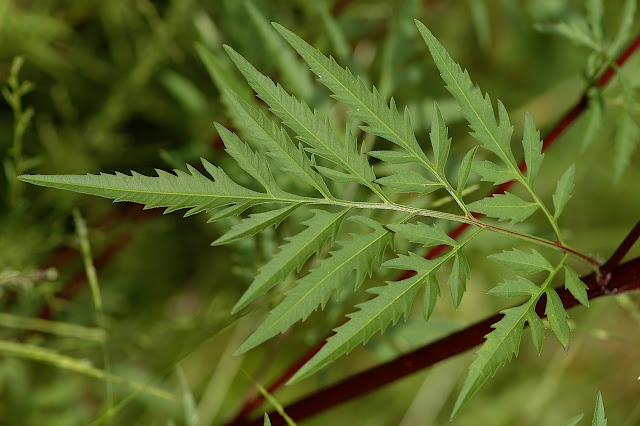 Bidens polylepis is widespread in our area. Most Bidens tend to stick to wet soils, but this species commonly spreads to drier hillsides. This species has 10-20 VERY hairy bracts behind the rays.
Bidens aritosa has fewer bracts, but otherwise can't be separated, and some authors simply lump the two. Hey now, there's an idea. 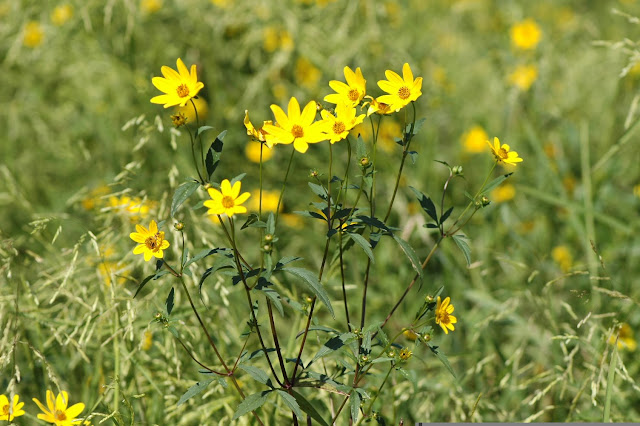 Here's an unknown three-leaved species I have yet to get a name on. The Bidens are tough. Sometimes you need a hand lens to examine the achenes (seeds), and that's still no guarantee. Scott Namestnik thinks this might be Bidens coronata. Since you can't see behind the flower heads, it's hard to be sure. Bidens are best done with specimens in hand rather than by photos. 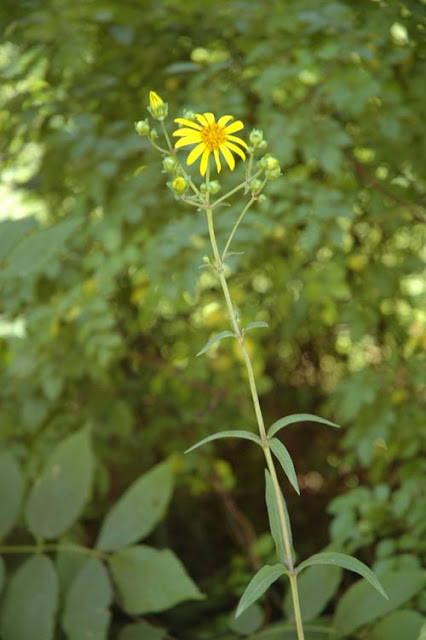 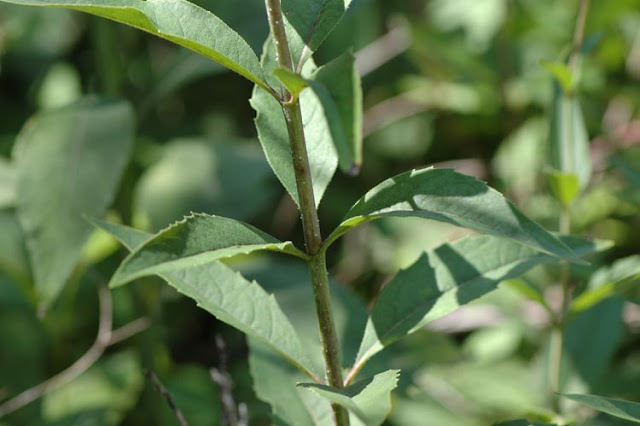 Leaves of three, Rosinweed it must be...but 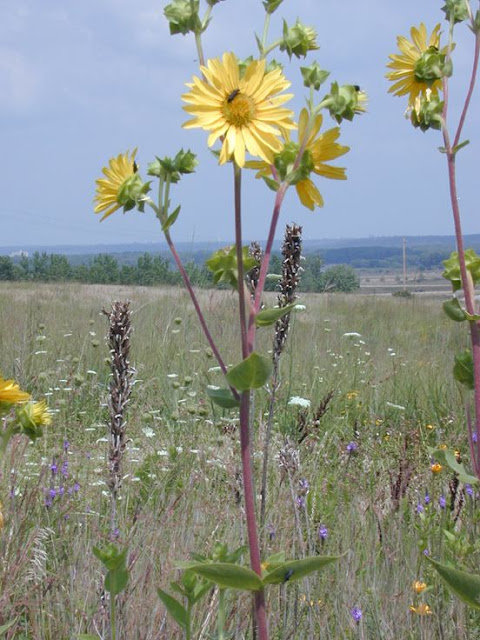 Further west in prairie country is another Rosinweed, Silphium integrifolium.  It is a two-leaved species not found in Ohio. 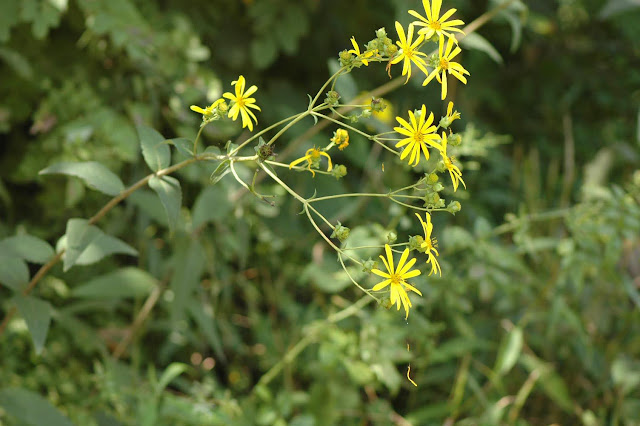 Yet throughout my area I see lots of this two-leaved version all the time. I hear integrifolium is being cultivated for seed packs, but I also hear there is a two-leaved variety of Whorled Rosinweed. So which is it? I say we blame it on the horticulturalists. 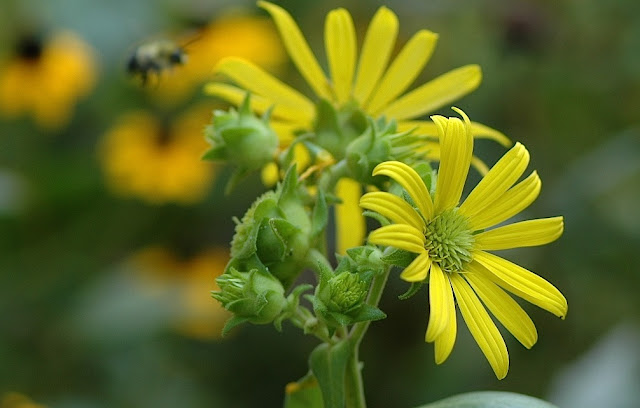 BTW, one of the things to look for that Silphiums show differently than the sunflowers are these short, broad green bracts behind the flower head.

Plants without stalked leaves, or at least appearing so. (That means don't go up to it with a hand lens to check, just make a general observation). 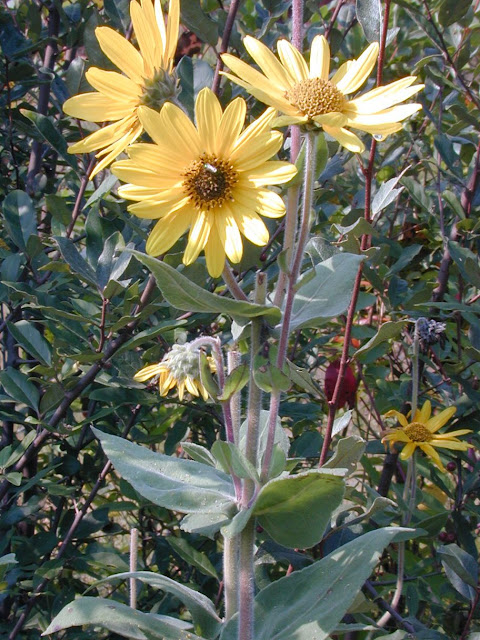 The texture alone should aid in identification, if not, check out the heart shaped leaf base. 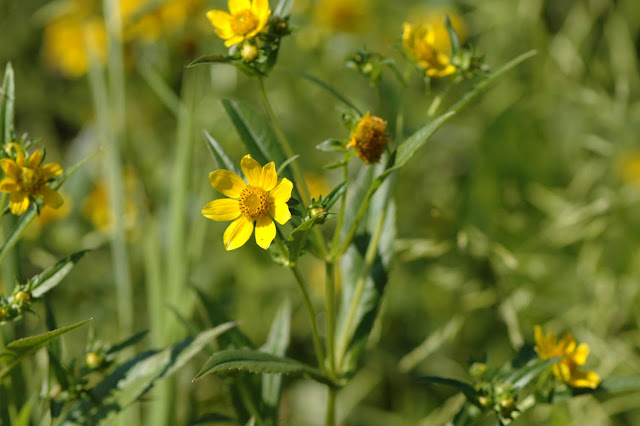 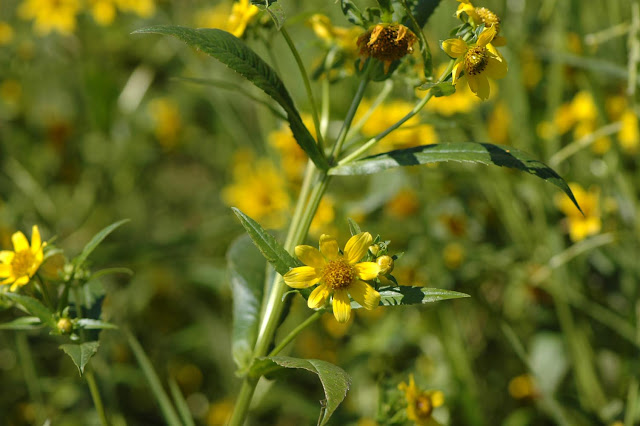 Nodding Bur-marigold, Bidens cernua. Actually one of the easier Bidens to recognize. Leaves clasp the stem, are narrow, and the flowers often nod or droop. 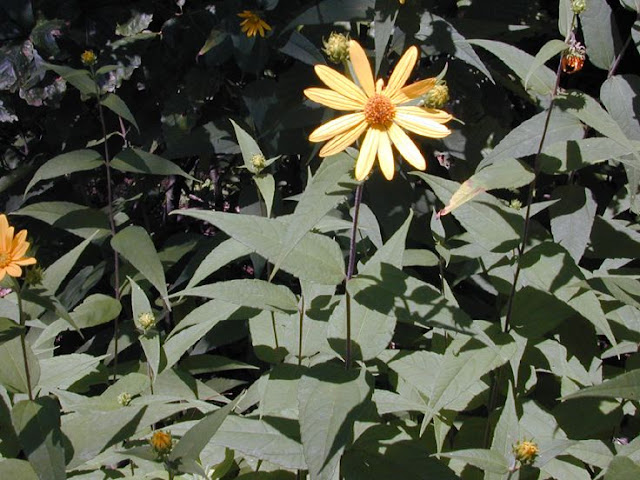 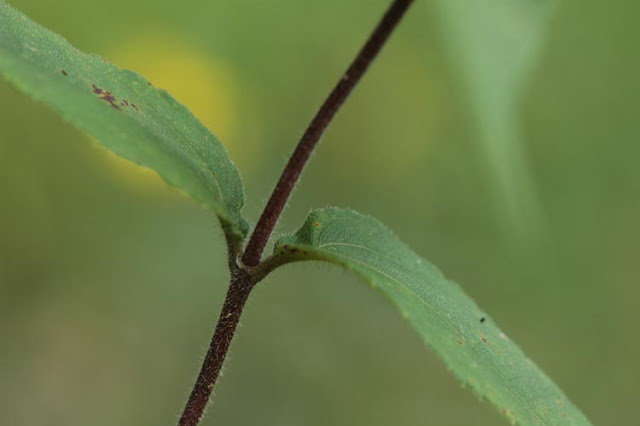 Woodland Sunflower, Helianthus divaricatus. Notice in the first two pics how it appears the leaves lack stems. Only when examining closely can you see they have short stalks. Look for this to form thickets on forest edges. Another common thing with many Helianthus, each pair of leaves grows in the opposite direction from the previous pair. 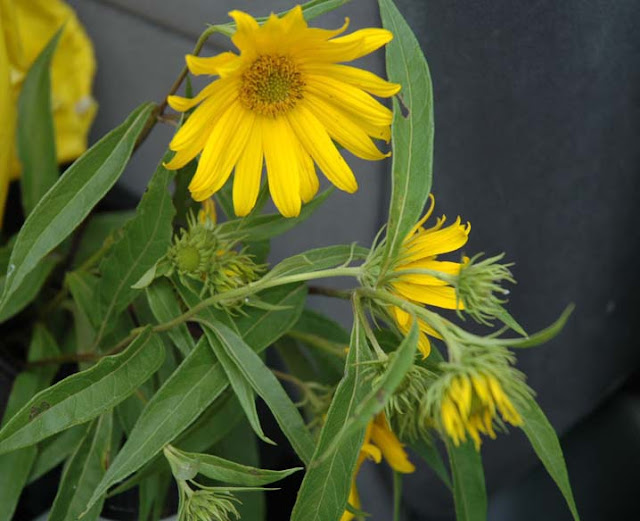 Saw-toothed Sunflower is widely distributed in Ohio. Escapes from prairies and forms dense thickets in disturbed fields and wet ditches. Another VERY similar species in Ohio is the Tall Sunflower, H. giganteus. Tall sunflower has unstalked leaves and a rough stem. Saw-tooth has obvious petioles and a smooth stem often with a glaucus (white) coating.

Only now are we getting to the ones that look alike. Huh? 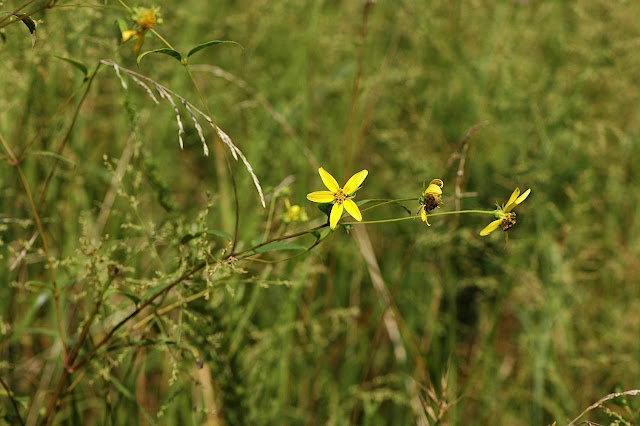 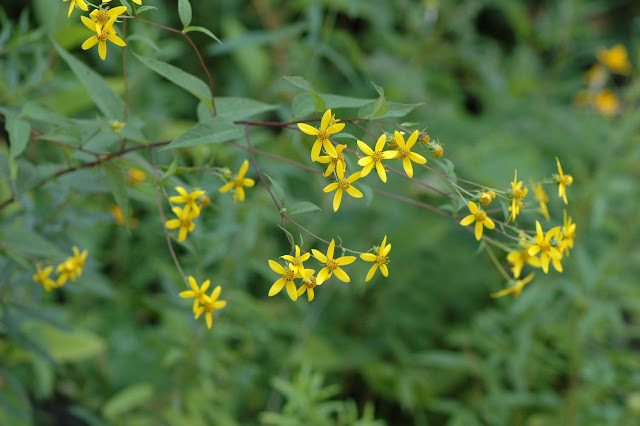 Small Wood Sunflower, Helianthus microcephalus. Whenever I see these along roadsides, what sticks out the most is the rather small flowers, usually under 2 inches. The stem is smooth, and the leaves get quite small near the flowers. It tends to send its flowers out on long stalks in a spreading manner, as if to say, "I'm not as big or showy as the others, but notice me anyway". 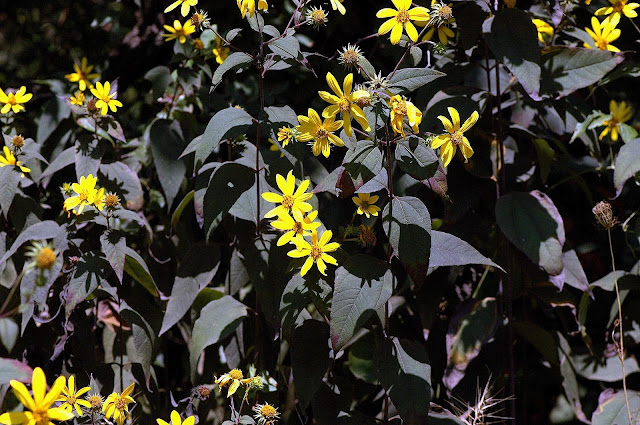 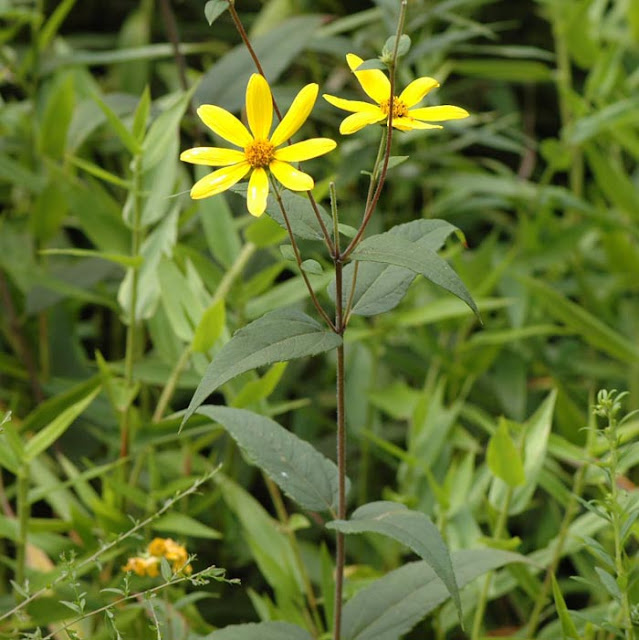 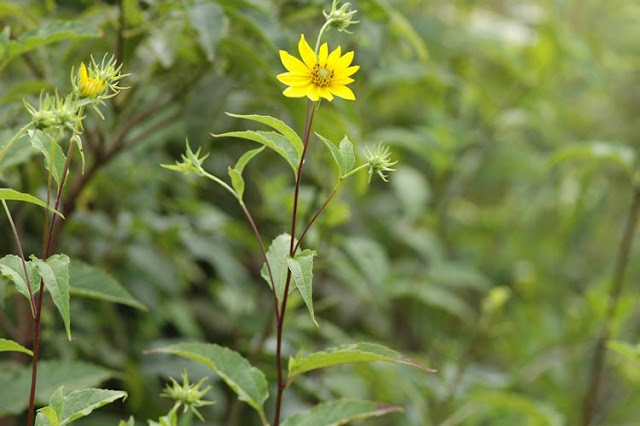 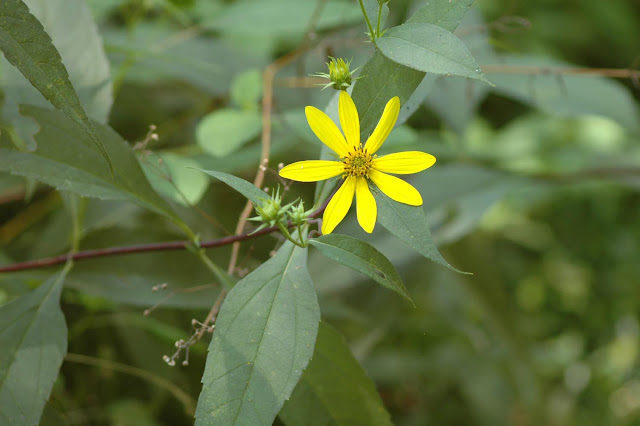 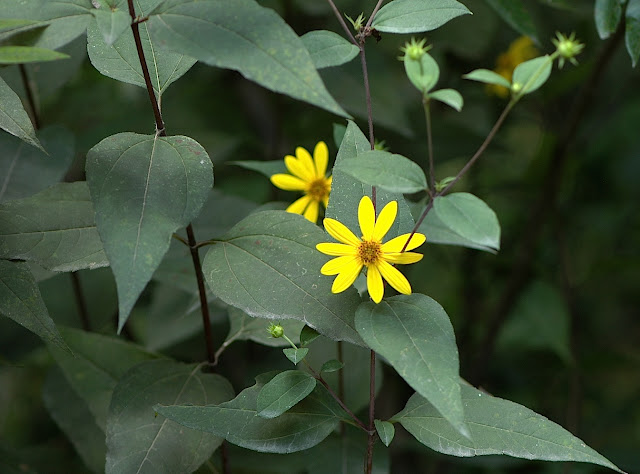 Here's a pic I added since the original post. Helianthus strumosus, Pale-leaved Sunflower. Similar to decapetalus yes, but more confusing with hirsutus to me. The entire plant on hirsutus is covered with stiff hairs that are very obvious. H. strumosus has scattered hairs on the stem, especially at the nodes and leaf petioles, but overall the plant looks more glabrous. The petioles are longer and the leaves wider than hirsutus. 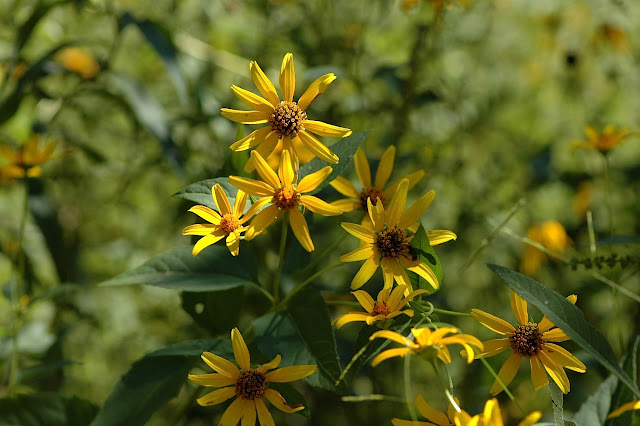 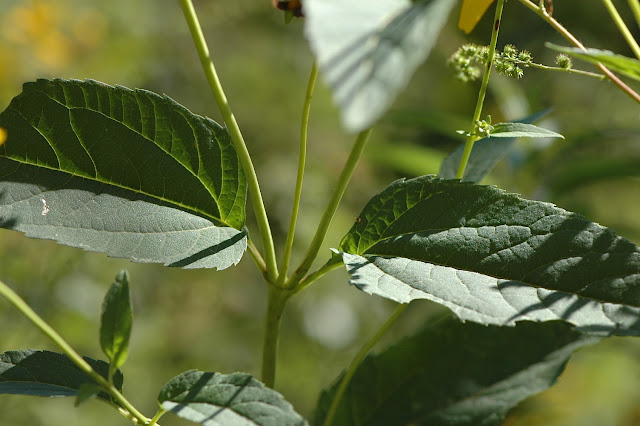 Very common and often overlooked is the Ox-eye or False Sunflower, Heliopsis helianthoides. Superficially it looks like everything else, but the flower rays are a very rich and deep yellow-orange. The stem also appears segmented like rabbit-ears, and results in this multiple stem growth you see above. While that's not unique to this species, my eyes are drawn to it more here than on others, and it just works for me.
In the sunflowers, the center head is where the reproductive portions are housed. In ox-eye, the rays themselves are fertile. You can't see that unless you pull off a ray. 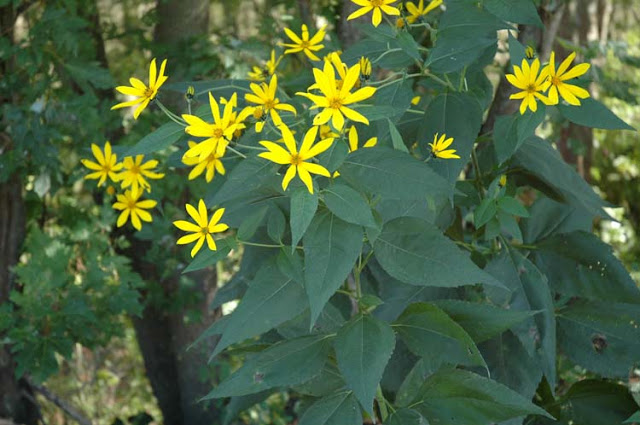 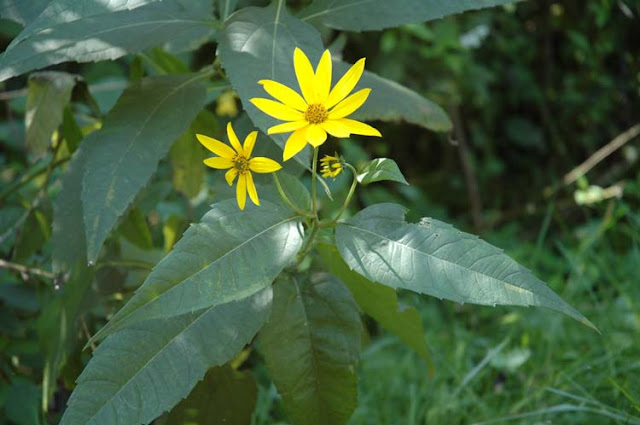 Jerusalem Artichoke, Helianthus tuberosus. It's hard to give a detailed description of this. Half the plant is alternate, the other half opposite. I've just come to recognize it even when driving by it. It has the broadest and most numerous leaves of anything I've posted in part 2. It's a late season bloomer found in bottomland forests. The roots are edible.


Well there it is. An attempt at least to work with a difficult group of plants. I don't know how accurate I've been, and it will take an expert to hopefully straighten me out someday. If any are misidentified, and that bothers you, well you can go to helianthus.
Posted by DenPro at 8:24 PM