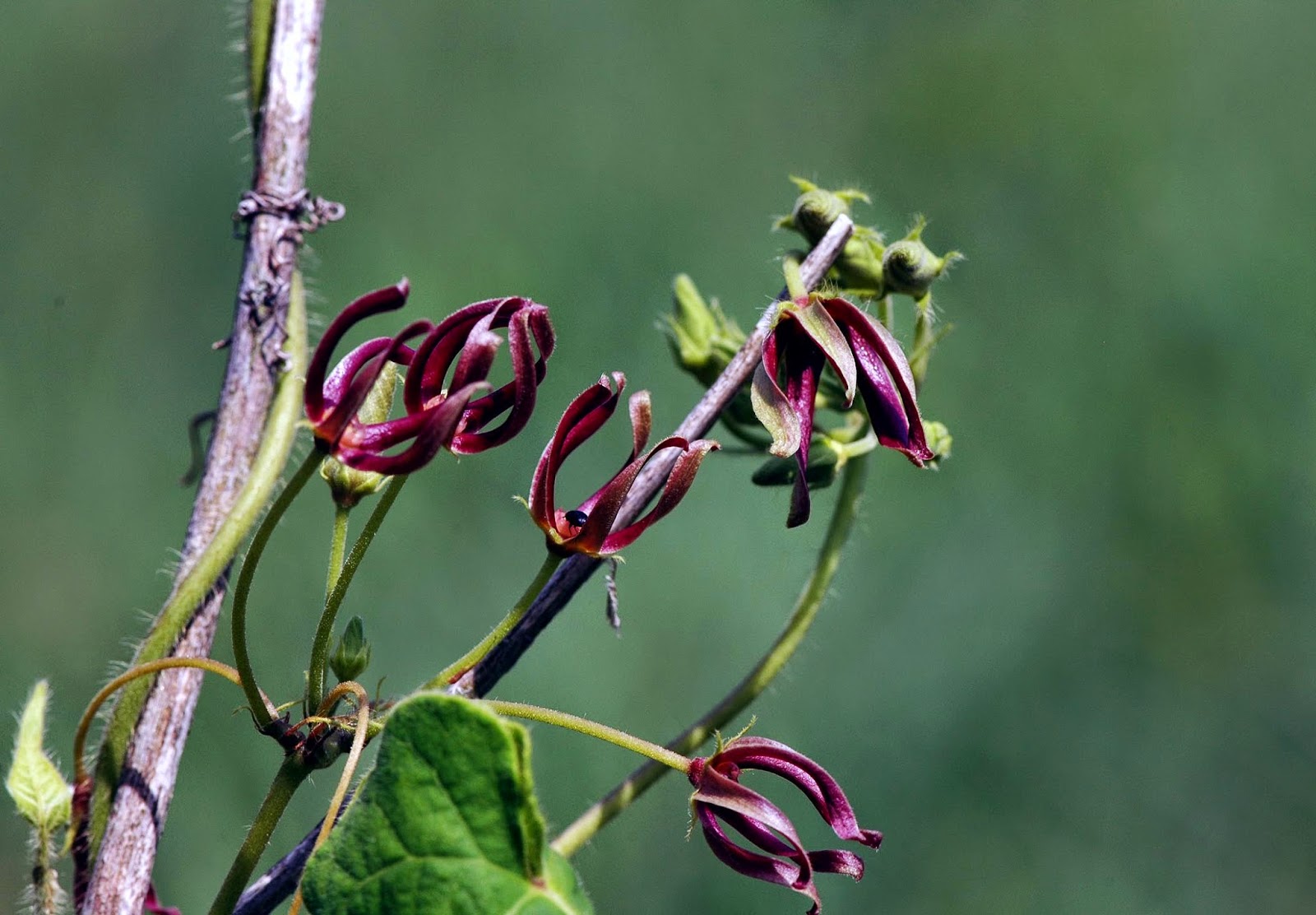 Climbing Milkweed, Matelea obliqua. There are countless wildflowers that are classified as vines, but you only have a limited time to observe them in bloom. Let's look at woody plants instead, and check them out in winter condition where the climbing mechanisms are not obscured by the leaves. 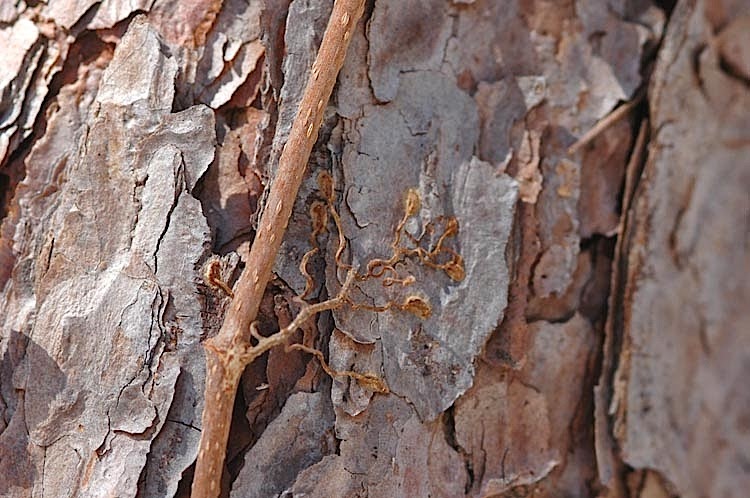 Virginia Creeper, Parthenocissus quinquefolia. The name is appropriate, as this vine creeps up tree trunks. Young plants attach to the bark by means of these round sucker pads. They adhere so strongly that if you pull them off, the bark often breaks away before the vine does. These aerial rootlets as they are often called, pop out about every second or third node, or where the bud and leaves occur. 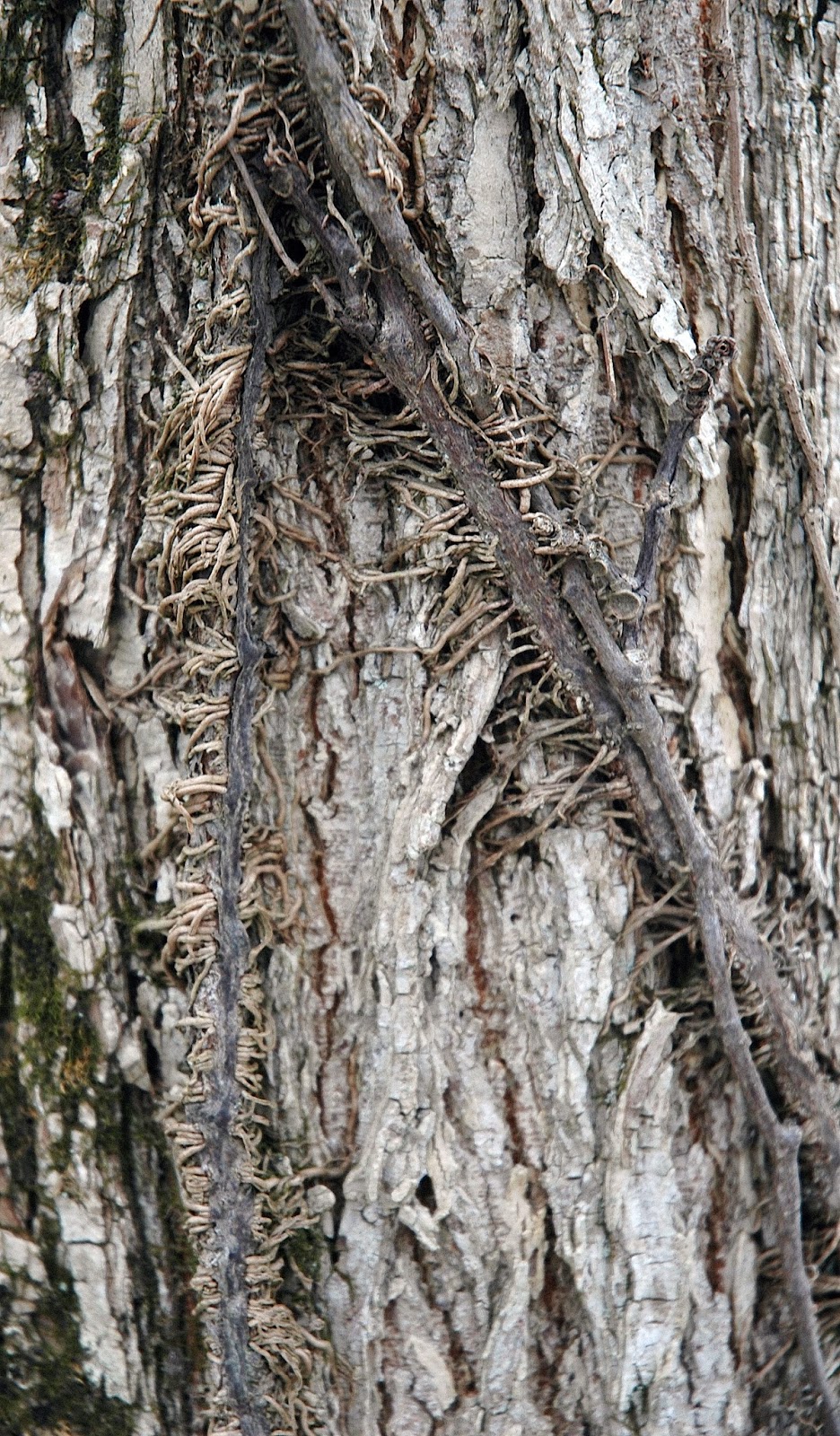 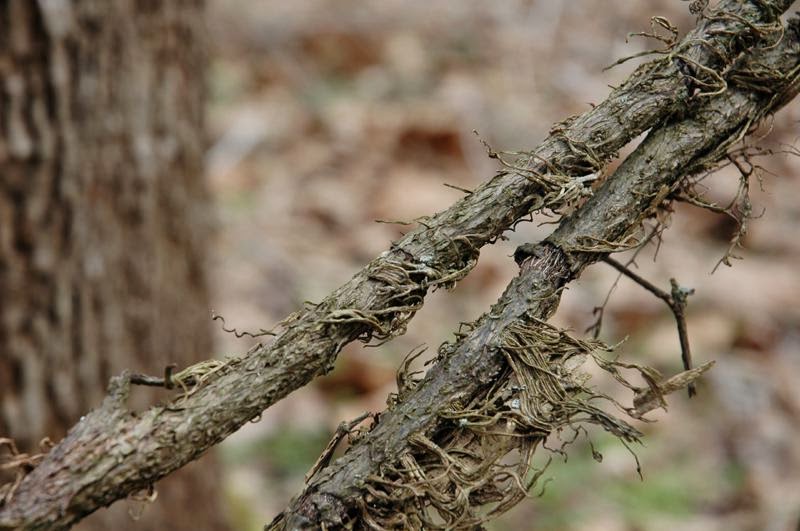 As Virginia Creeper ages, those sucker discs are replaced by very thick aerial rootlets that look like mop hairs or dreadlocks. If this is the only part of the plant you look at, you may mistake it for Poison Ivy. 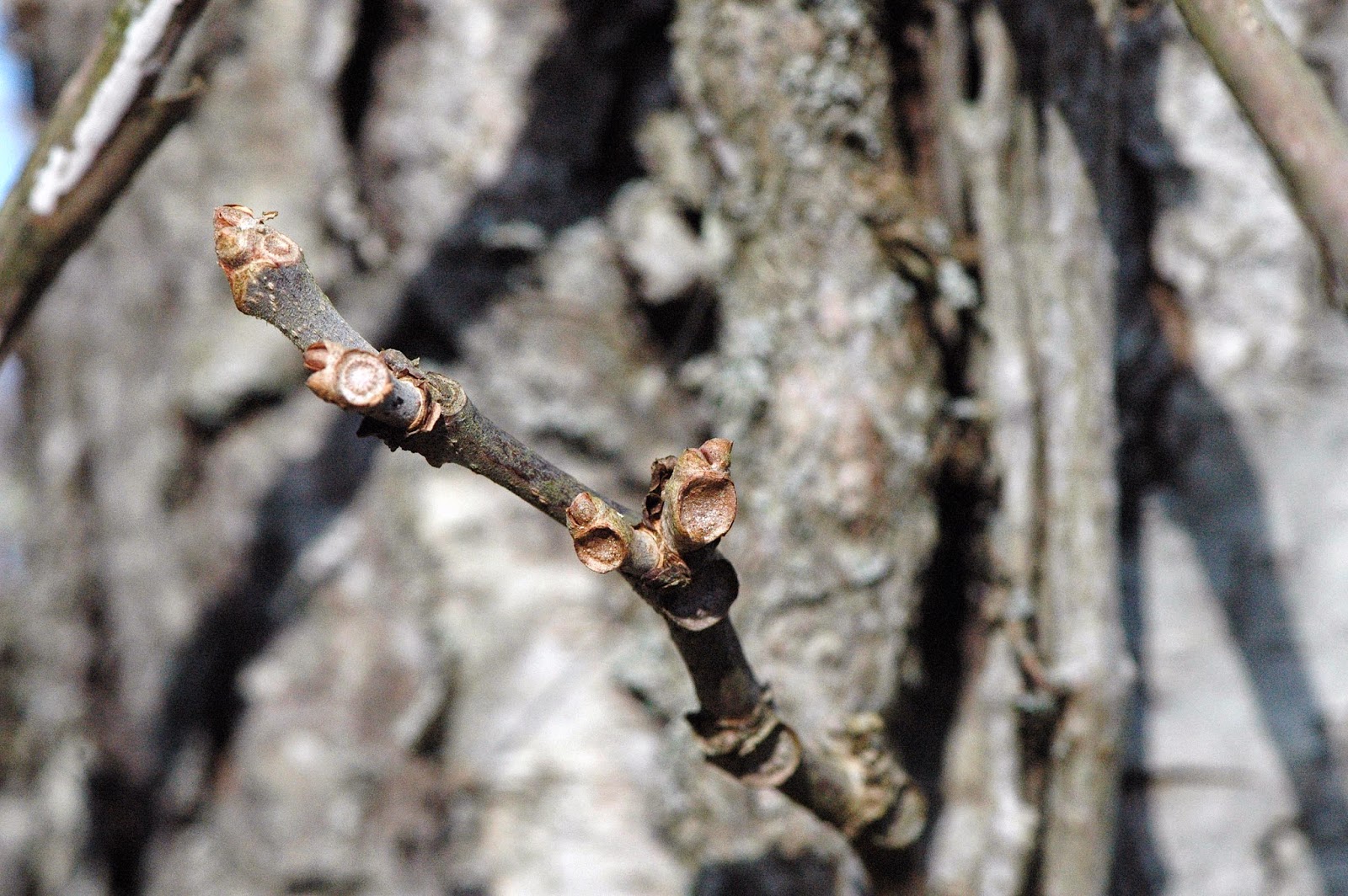 Virginia Creeper buds are orange and scaled. The leaf scars are circular, and deeply impressed like craters. We should compare it to Poison Ivy which often grows along side it. 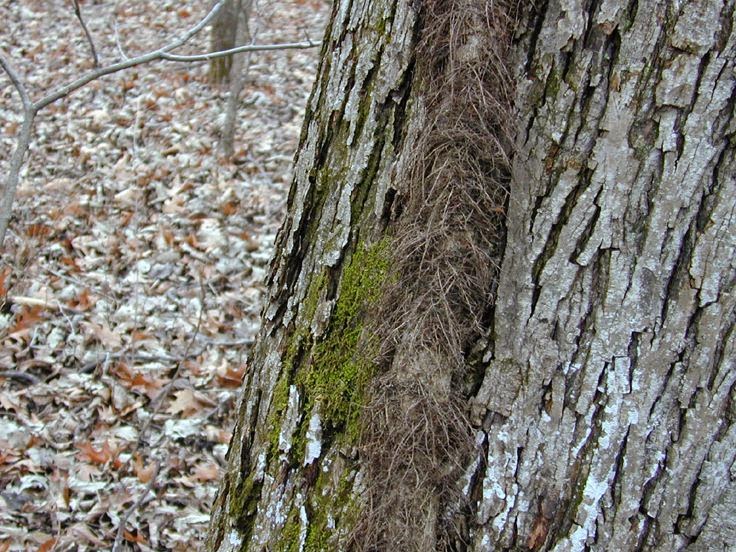 Poison Ivy, Toxicodendron radicans, sends out its aerial rootlets throughout the plant, both above and below, regardless of the age of the vine. The hairs are much thinner when compared to Va. Creeper. 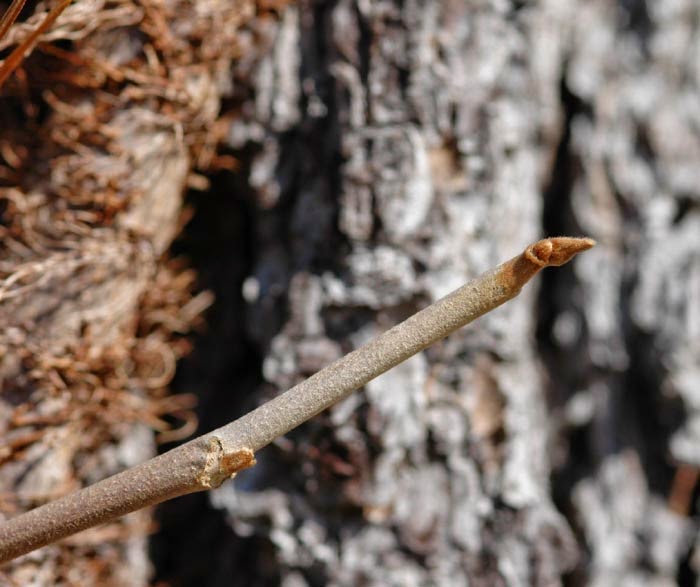 When in doubt, go right to the new growth twigs. The leaf scars are V shaped and not deeply impressed in the twig. The buds are also orangish or peach colored, but fuzzy and soft scaled, or what we call naked. Virginia Creeper grows tight against the tree trunk, as if it was scared of heights. Poison Ivy will send its branches outward, as if it was wanting to reach out and touch you. 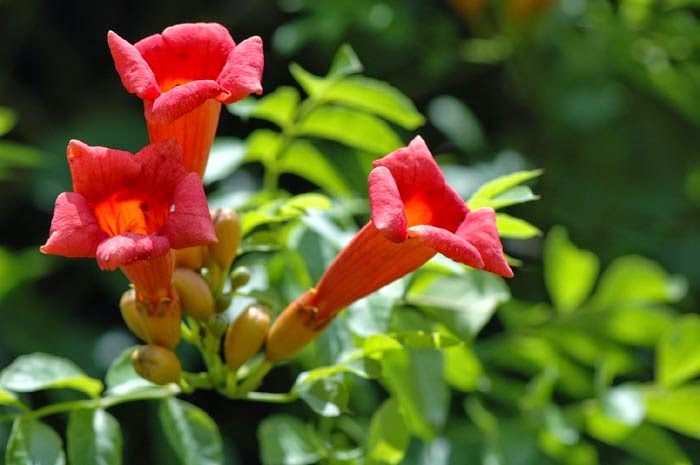 It's hard to mistake the beautiful flowers of the Trumpet Creeper, Campsis radicans, but what do you look for when the flowers and leaves have dropped? 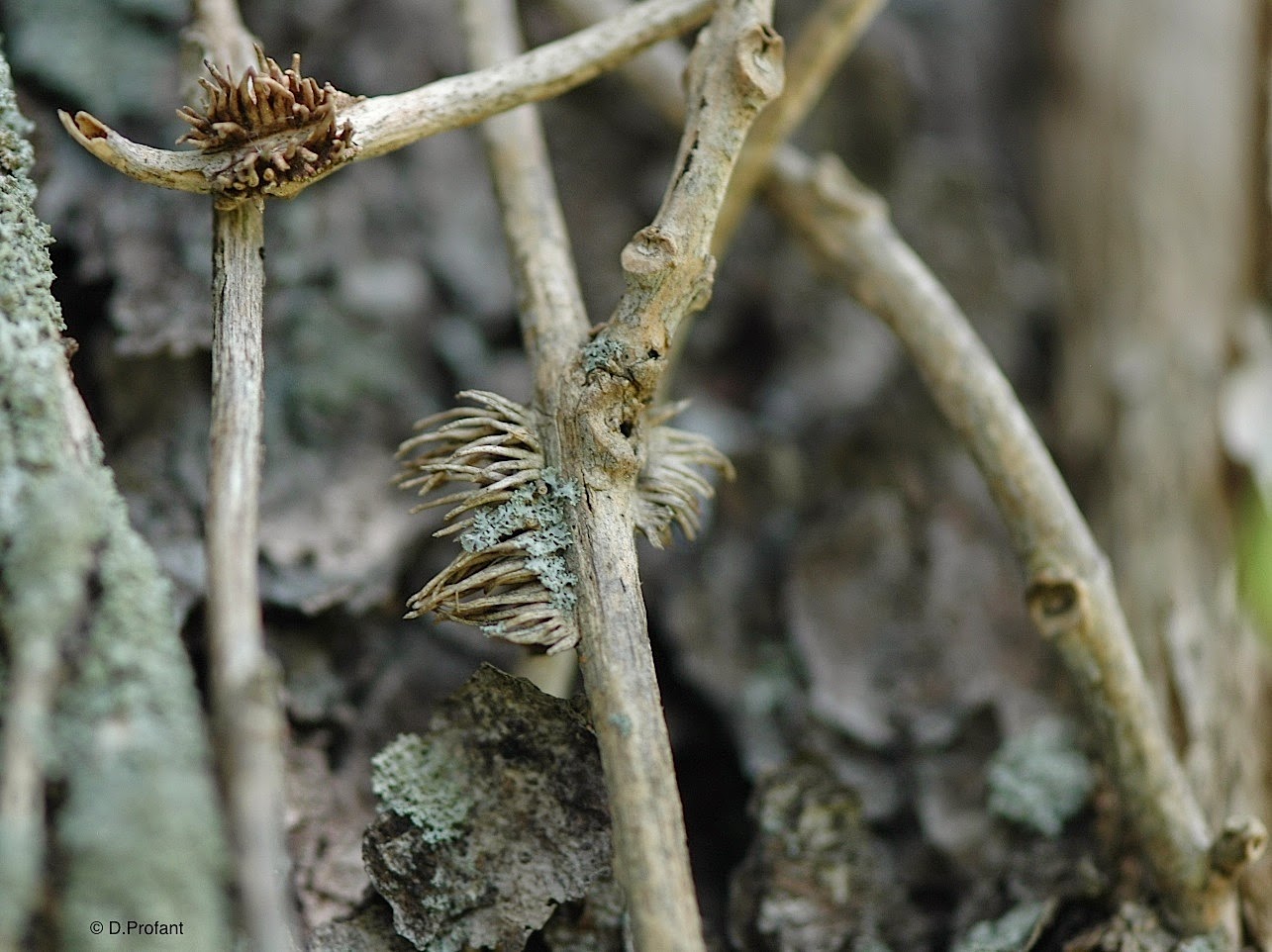 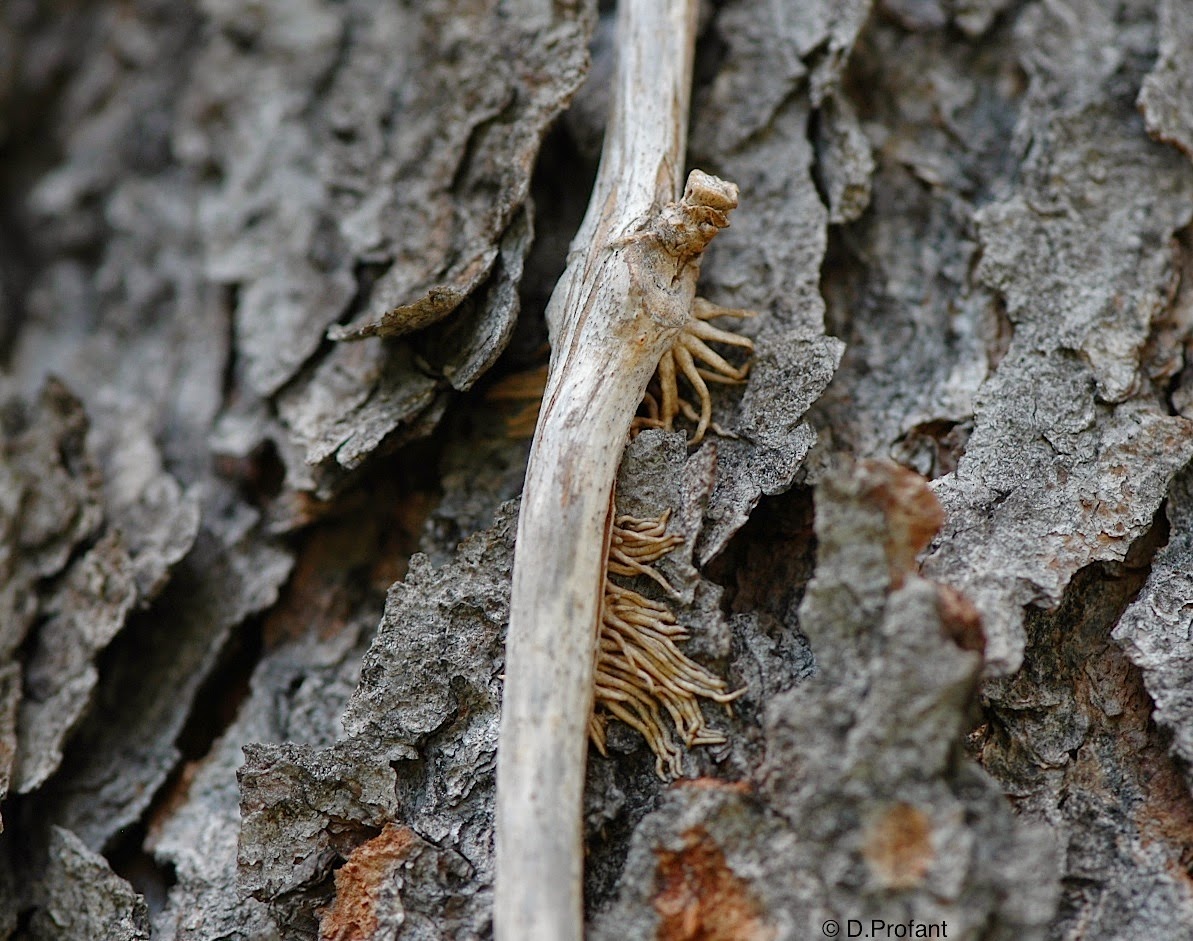 The light brown twigs are easy to spot against a darker background. More important is the arrangement of the rootlets. On Trumpet Creeper they are all concentrated in small batches that pop out periodically like a scrub brush along the twig. 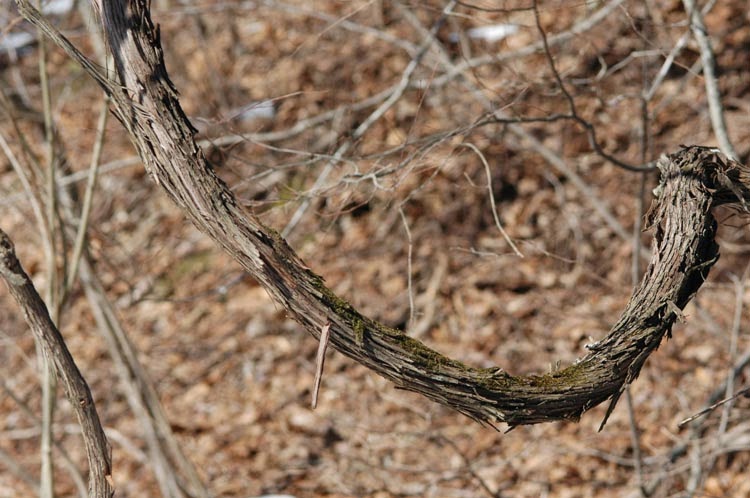 Another group of climbing vines are the Wild Grapes, Vitis. The older bark on Grape becomes shreddy, and as kids we would swing on them in the woods, our so called Tarzan vines. 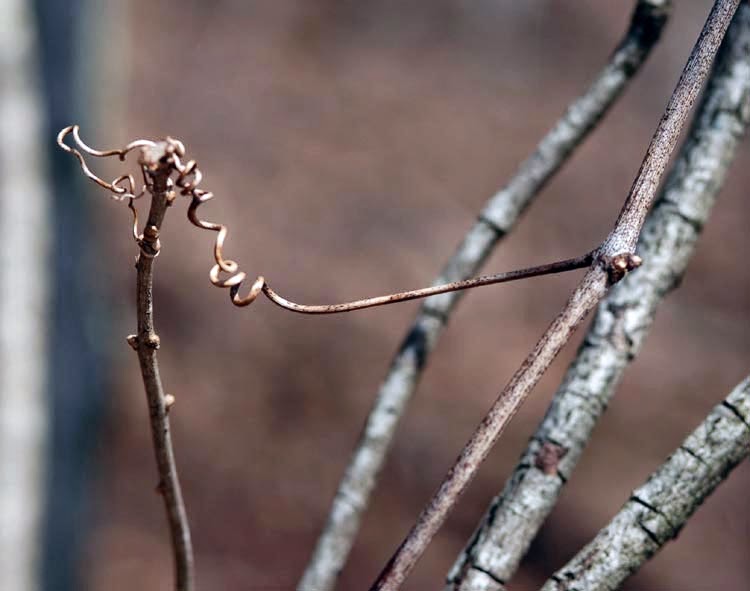 Grapes start growing by sending out tendrils. Many types of tendrils are essentially modified leaves. The ends are curly and wrap around twigs like a bull whip. This gives the grape vine support as it climbs higher. Some tendrils tighten their curls and help pull a plant upward. 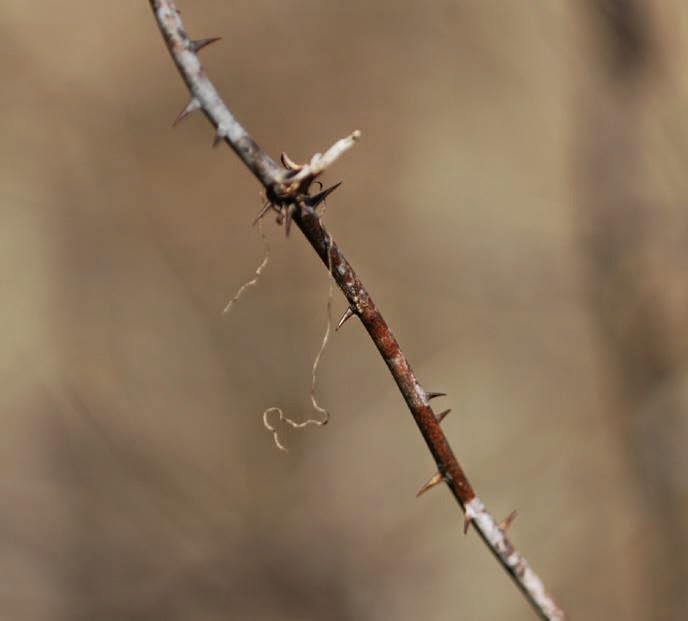 Another group of plants with tendrils are the Greenbriers. These tendrils allow many of the species, including this Glaucous Greenbrier, Smilax glauca, to climb high into trees. 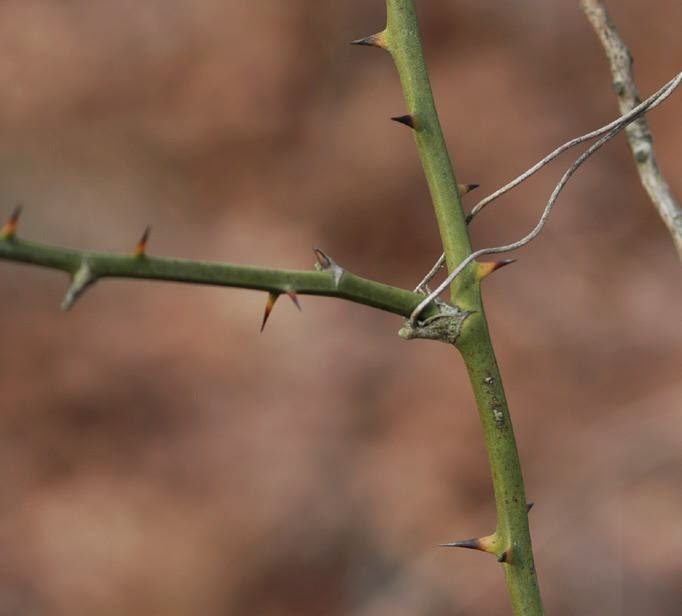 Sawbrier, Smilax rotundifolia, is less picky about where its tendrils land. They often attach to other Sawbriers, or even branches on the same plant. This results in shrub like thickets we often refer to as brier patches. (Sometimes briar is spelled with an a). 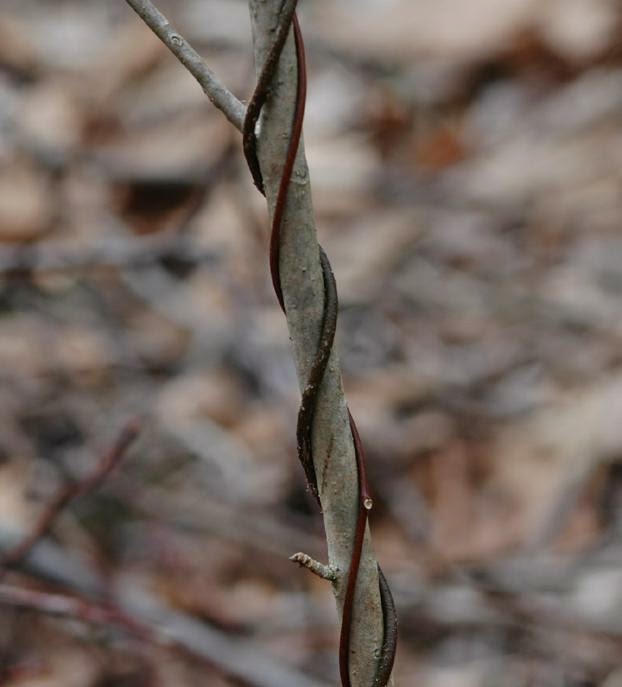 Canada Moonseed, Menispermum canadense. This dark vine looks like a skinny snake climbing a tree. They don't use aerial rootlets or tendrils. Their method of climbing is to simply wrap around a trunk. 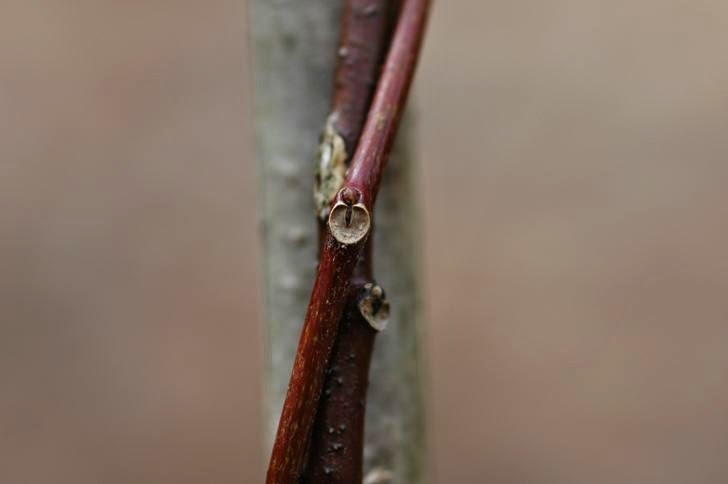 Up close Moonseed has round leaf scars like Virginia Creeper. What's different is that knife cut, a small slit or notch located at the top of the leaf scar. 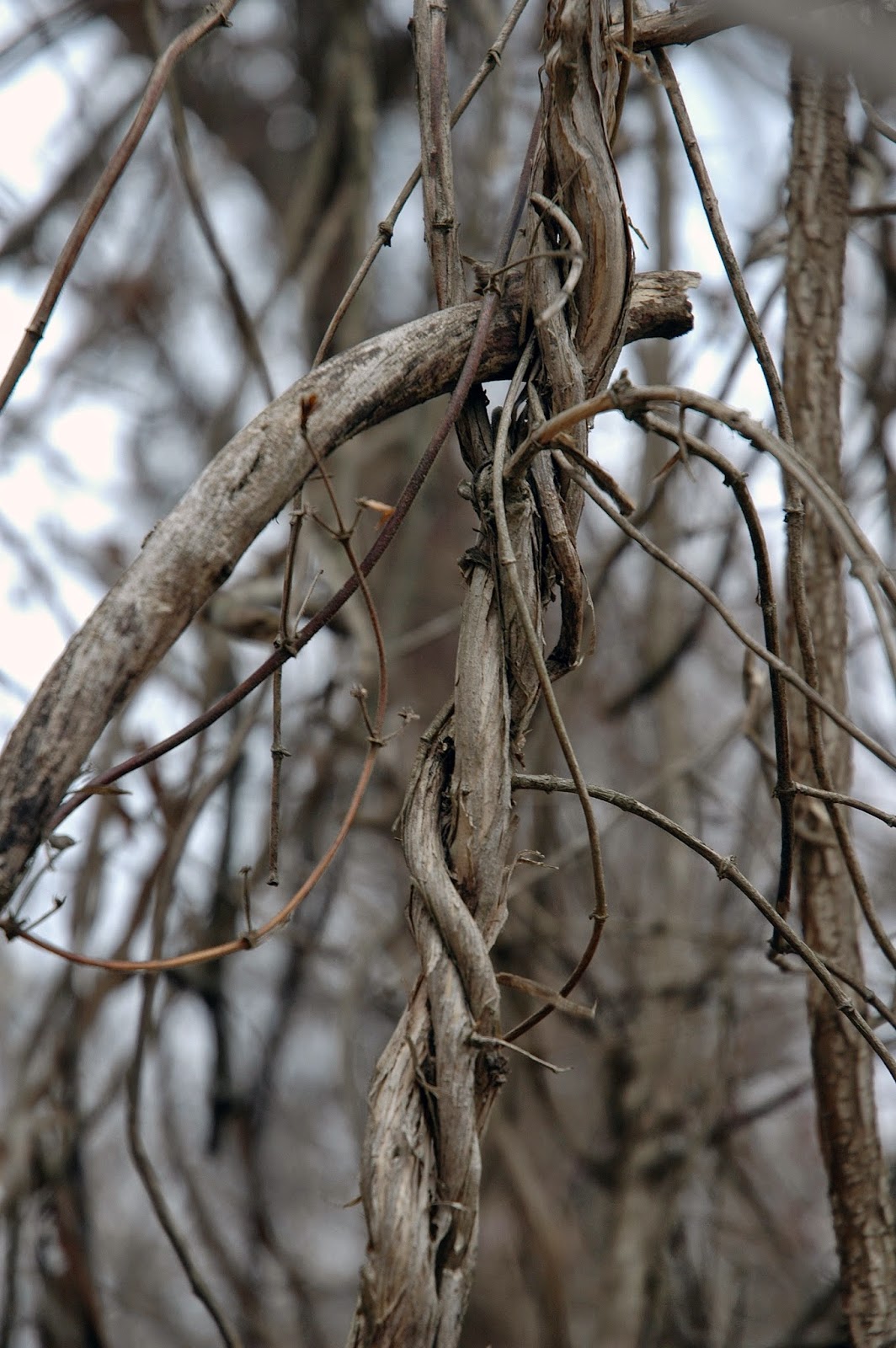 Another climbing vine that wraps around plants, (including itself), is one of the top five worst invasive species in Ohio, the Japanese Honeysuckle, Lonicera japonica. When honeysuckles climb on themselves, they don't seem to damage each other. 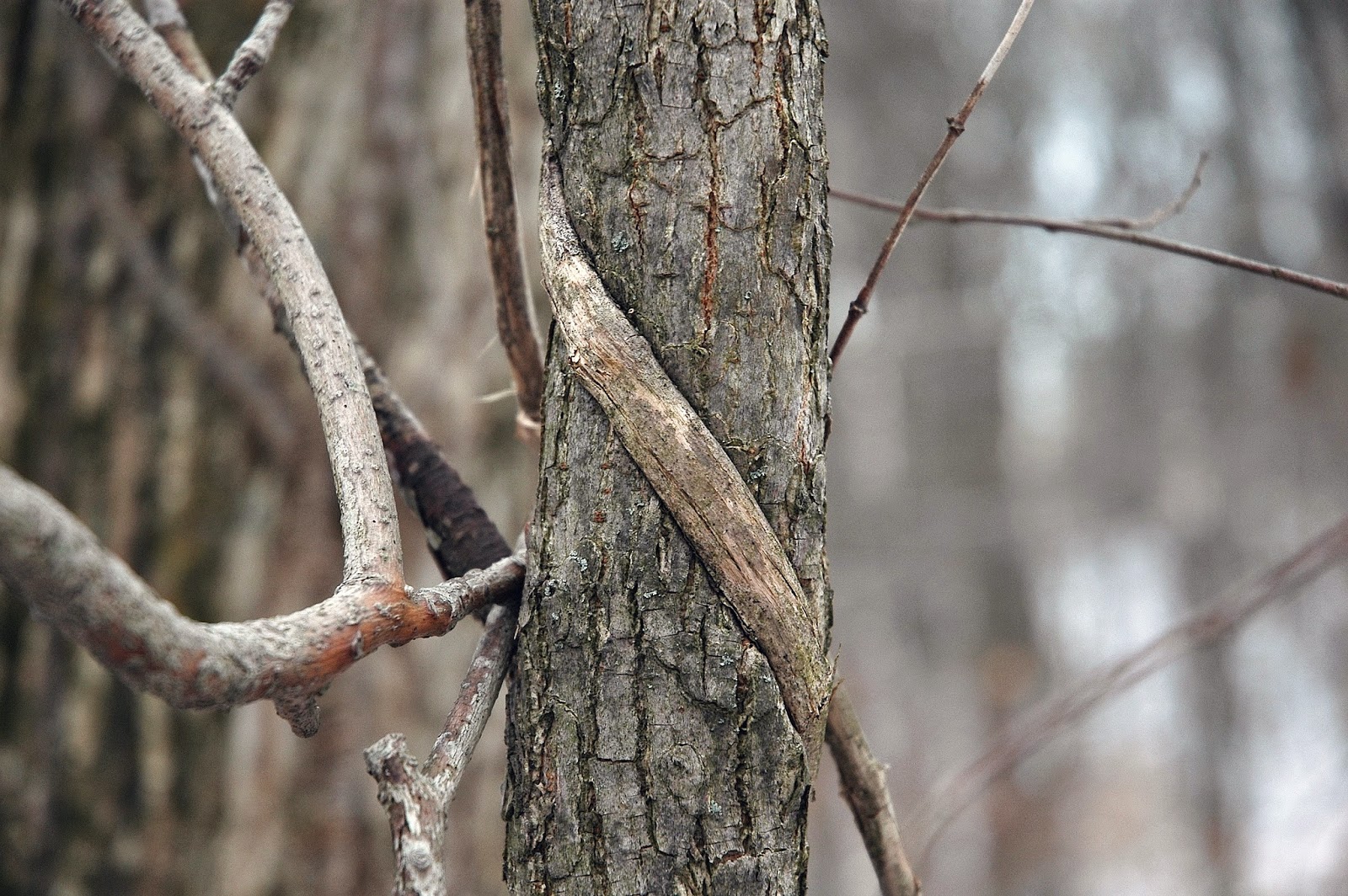 Once they fixate on a steady growing tree, they begin to choke the life out of it. Here you can see the vine squeezing so hard it has become imbedded into the bark. 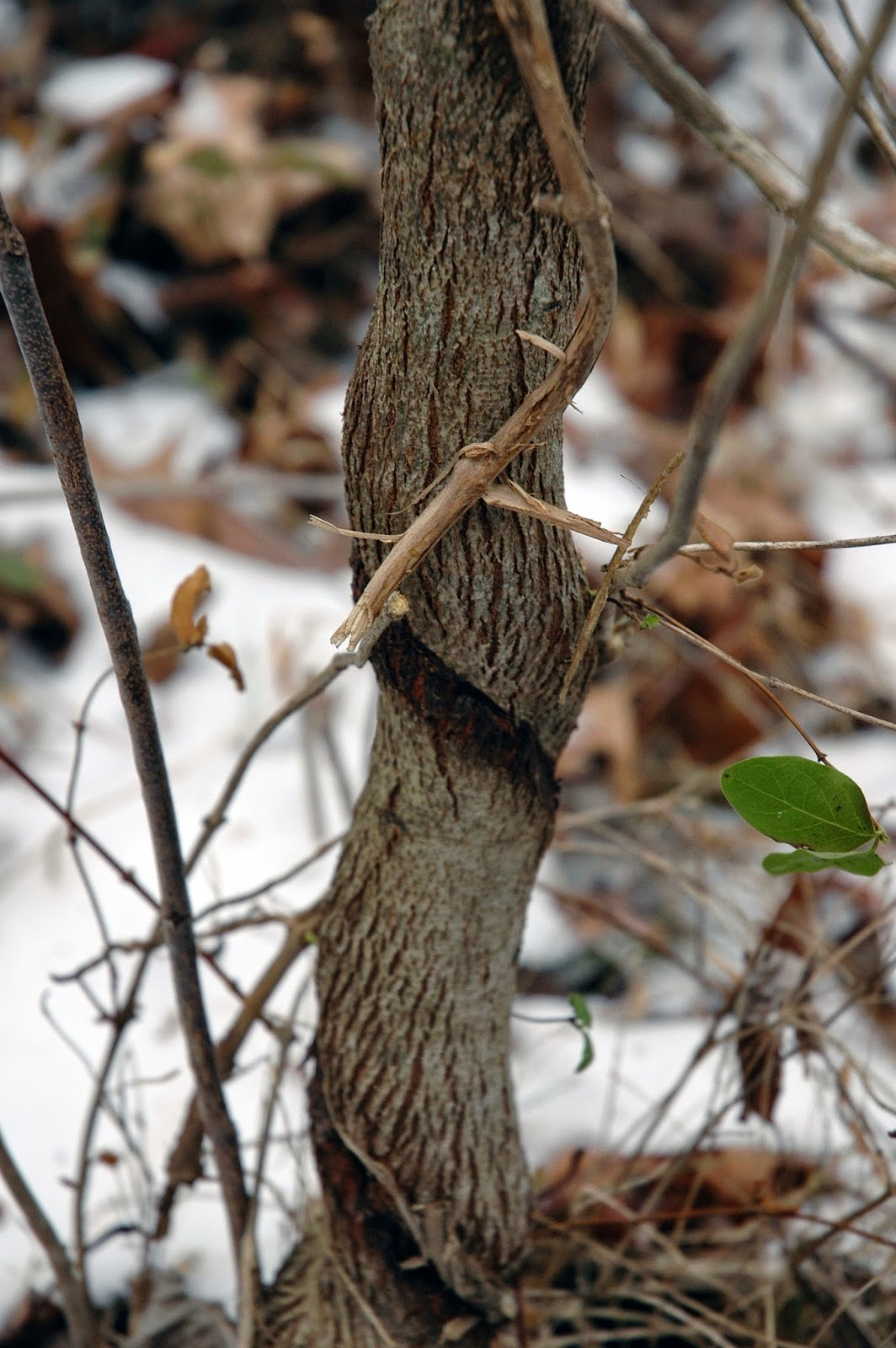 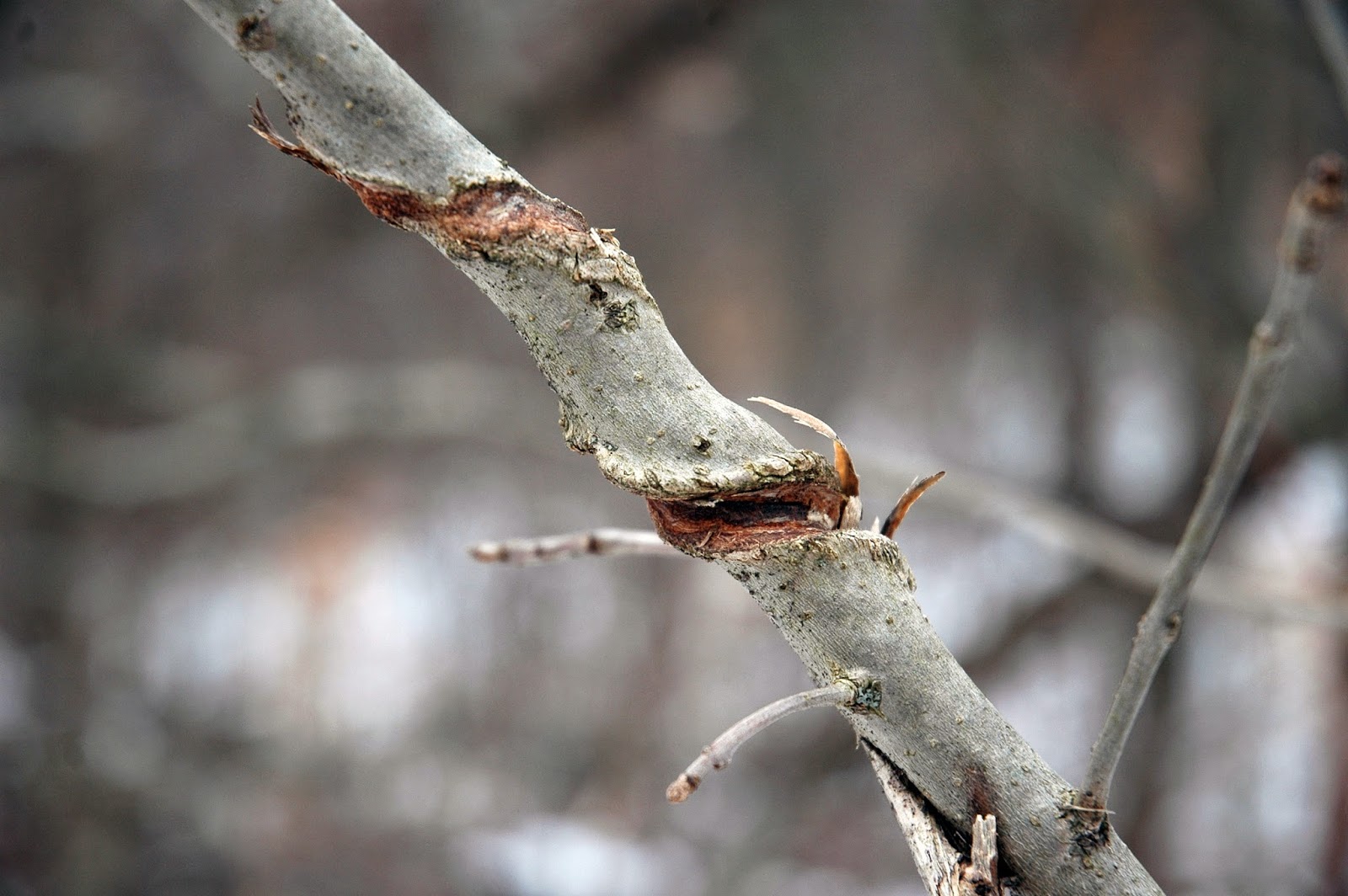 This results in the cambium layer being shut off, which can be fatal to small trees. You have probably seen people hiking with fancy curled walking sticks. Japanese Honeysuckle is one of the species responsible for those designs. 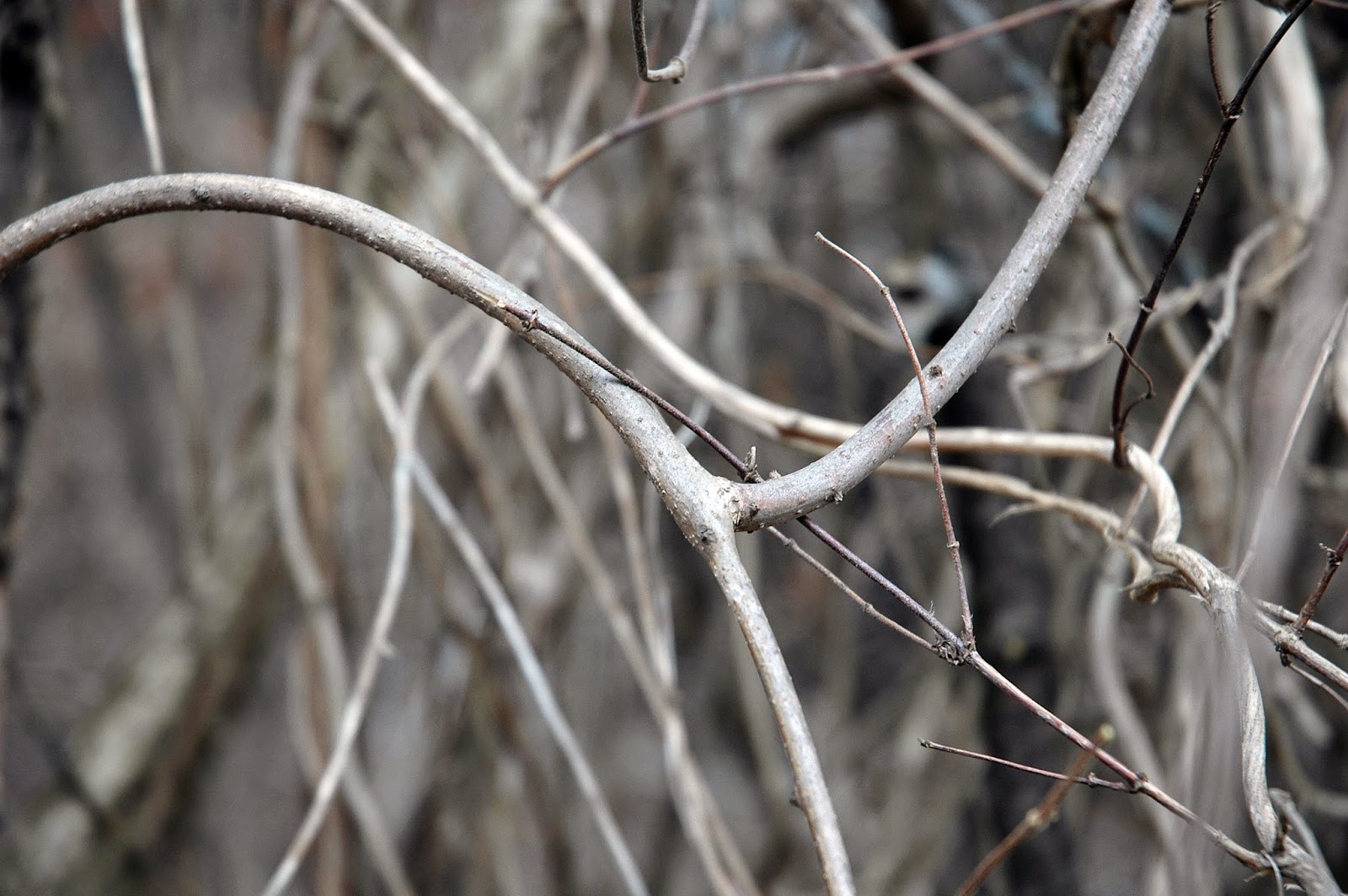 There has been another choking vine in our woods long before honeysuckle was a problem. Many of those walking sticks I mentioned were a result of this sprawling vine, American Bittersweet, Celastrus scandens. 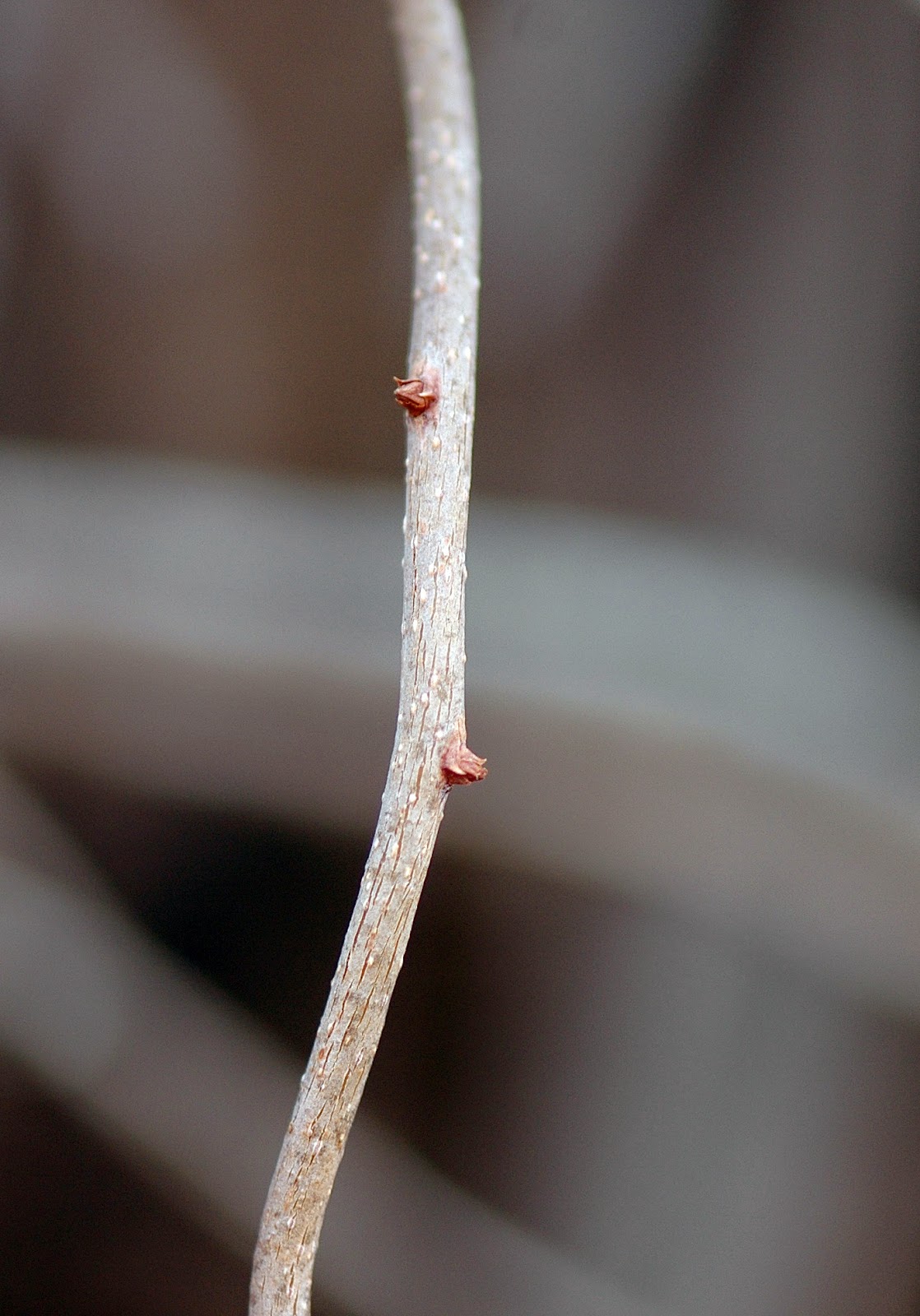 In the winter, Bittersweet can be recognized by the buds. Like creeper and ivy, they too are colored orange. These are very small and pointy, as if the twig had goosebumps. 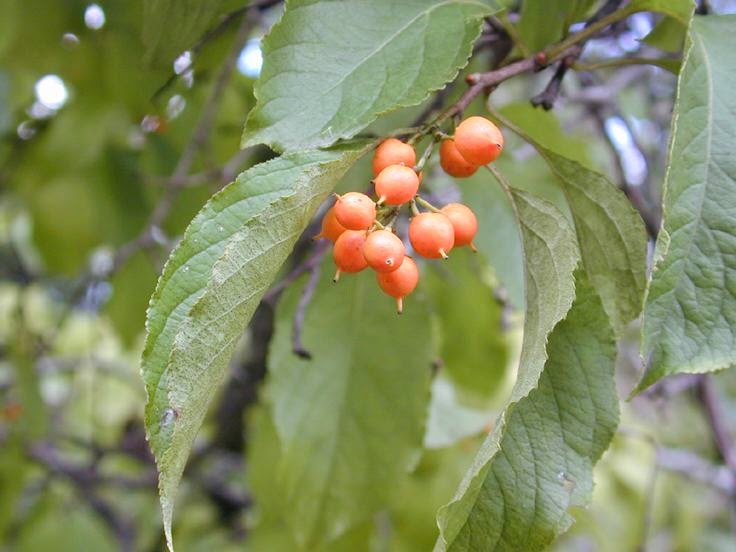 Nature has its checks and balances. As a native species, Bittersweet has limiting factors which prevent it from becoming too abundant, and therefor is not a threat to overall forest growth. Our real concern should be with Oriental Bittersweet, Celastrus orbiculatus. Yes, you guessed it, another exotic invasive. Our native species produces these orange capsules at the ends of the branches, while Oriental produces fruit ALL OVER the entire plant. American has broadly egg shaped leaves, while Oriental has round leaves. 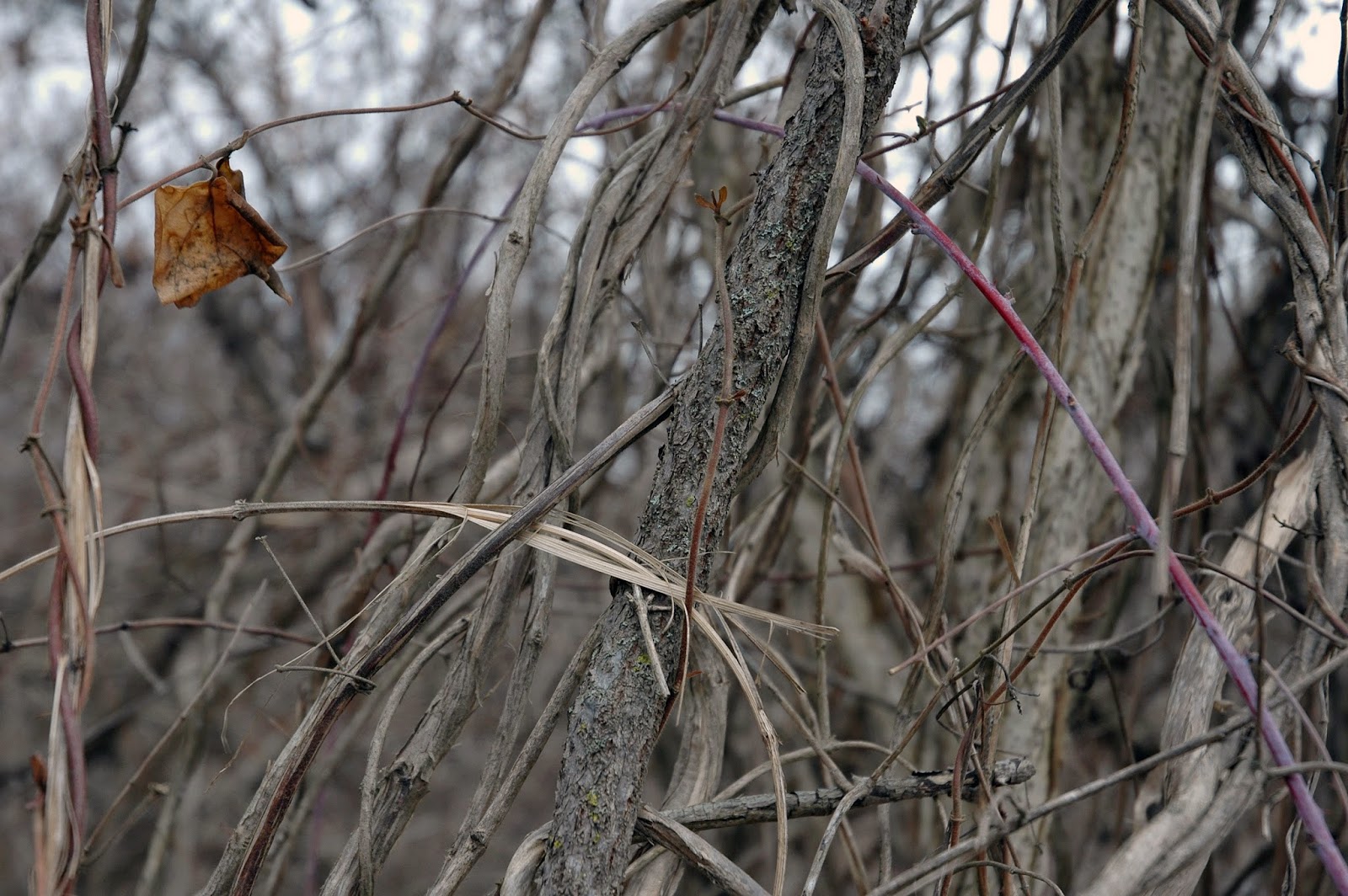 Ah, the tangled webs we weave. Here a Raspberry tries to wiggle through a nearly impenetrable thicket of Grape, Virginia Creeper, Honeysuckle, and Bittersweet.
Posted by DenPro at 5:28 PM