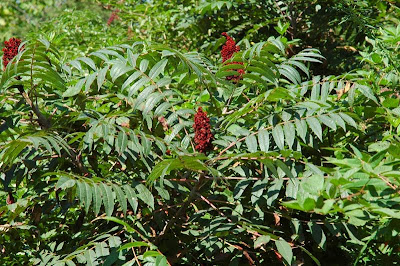 The Sumacs of Ohio are comprised of five species in two genera. They are classified as shrubs, but several can obtain large sizes. All have compound leaves, and the majority have red fruit. Sumacs are not woodland species, but require open areas and edges in full sunlight. 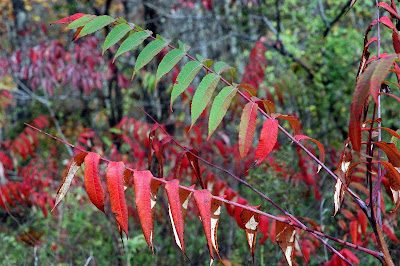 The most common species in our area is the Smooth Sumac, Rhus glabra. The rachis is often reddish purple because it has a glaucous coating. There are a large number of leaflets on Smooth Sumac.

The underside of the leaflets are white, and the margins are serrate.

The fruit is bright red and grows erect. Besides soaking it for making lemonade, the dried berries or "drupes" can be added to salads for a hint of lemon also. The sap of sumacs is very sticky and used in varnish. 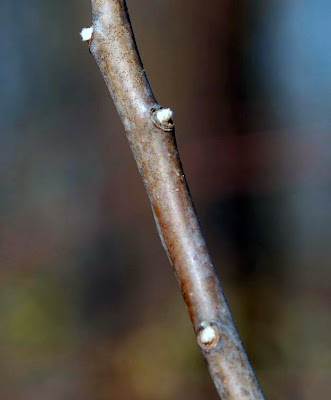 The new growth twigs of Smooth Sumac are 3-sided and fairly smooth to the touch. The buds protrude outward from the center of the leaf scar. These twigs are eaten by deer and rabbits in the winter. 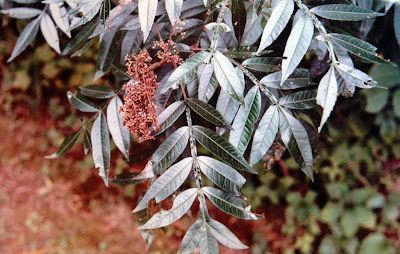 Our second most common species is Winged Sumac, Rhus copallina. It has fewer leaflets than Smooth. They are green on both sides, and the margins are entire. The key feature are the leafy like growths or wings between the leaflets. The look of those leaves are not due to a flash, but are naturally this bright. The other common name is Shining Sumac. 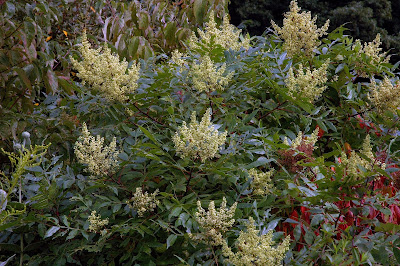 Winged Sumac has yellowish white flowers during the summer. Come fall the fruit will be red, but much duller than Smooth Sumac. Another thing to notice, the fruit tend to hang rather than grow straight up. 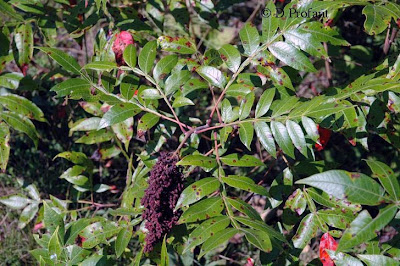 Before long the fruit will start to droop, and turn a blackish red. 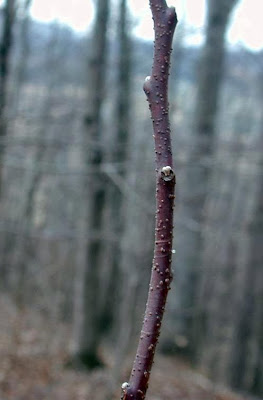 Compared to Smooth Sumac, the twigs will feel more round rather than angled. The twig is not smooth, but covered in an abundance of bumpy lenticles.  The buds grow out from the top of the leaf scar. 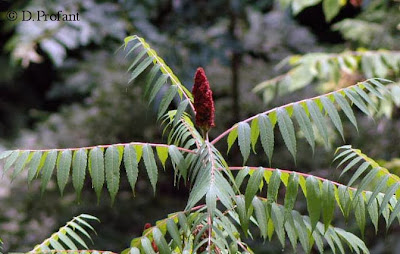 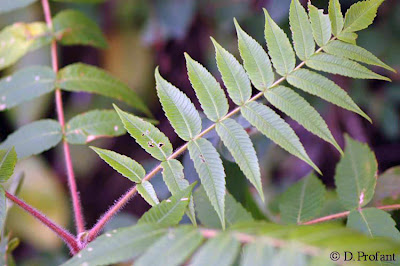 Looking at these pictures, it would appear to be more of the Smooth Sumac. Well the leaves, twigs, and fruit ARE nearly identical, but with one major exception.

A closer look reveals that all parts of this plant are covered in velvety hairs. This is Staghorn Sumac, Rhus typhina. Though found state wide, I see more of it in northern Ohio. This is the largest of the sumacs. So large in fact, as a kid I was able to climb them like a tree. 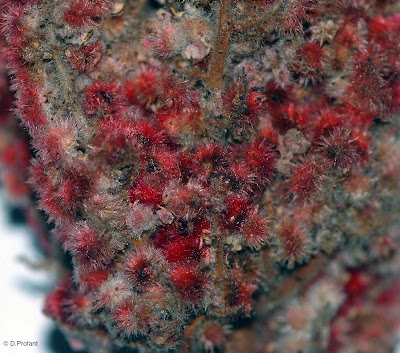 A closeup of the fruit shows how thick the hairs can be. Each drupe looks like a miniature red Sea Urchin. 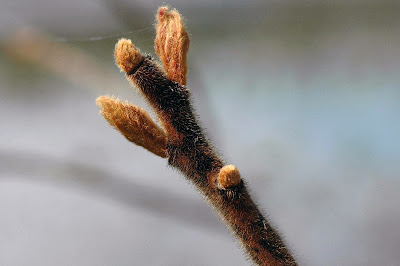 Nothing shows the fuzziness better than the twig. This was taken in early spring as the upper buds began to open up into leaves. 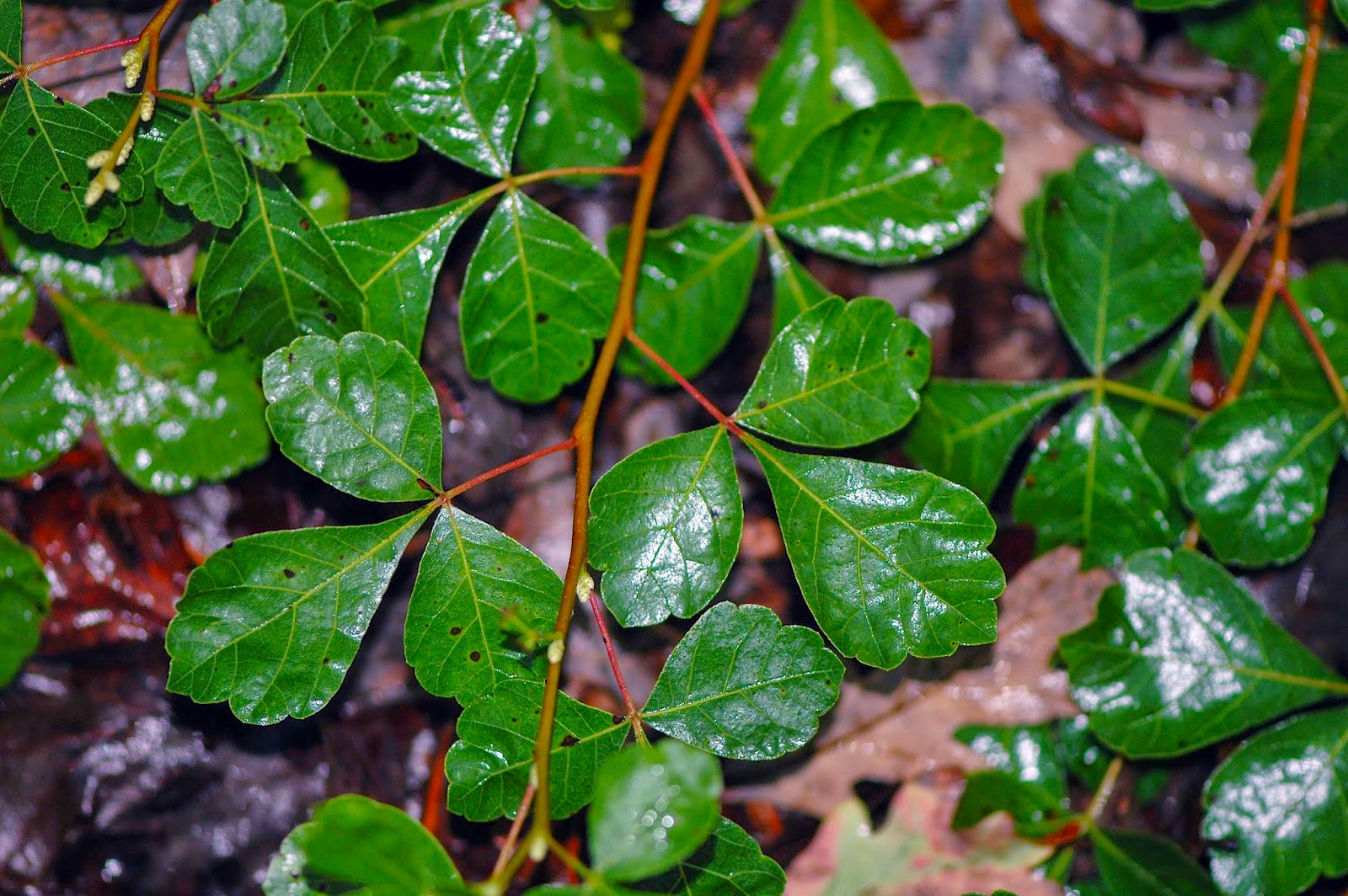 The sumac that people seem least familiar with is the smallest one, known as Fragrant Sumac, Rhus aromatica. The latin name refers to the sweet spicy smell when you crush the leaves. When folks find this shrub for the first time, they usually back away.

There's good reason to be hesitant. The leaves are trifoliate, and resemble Poison Ivy! 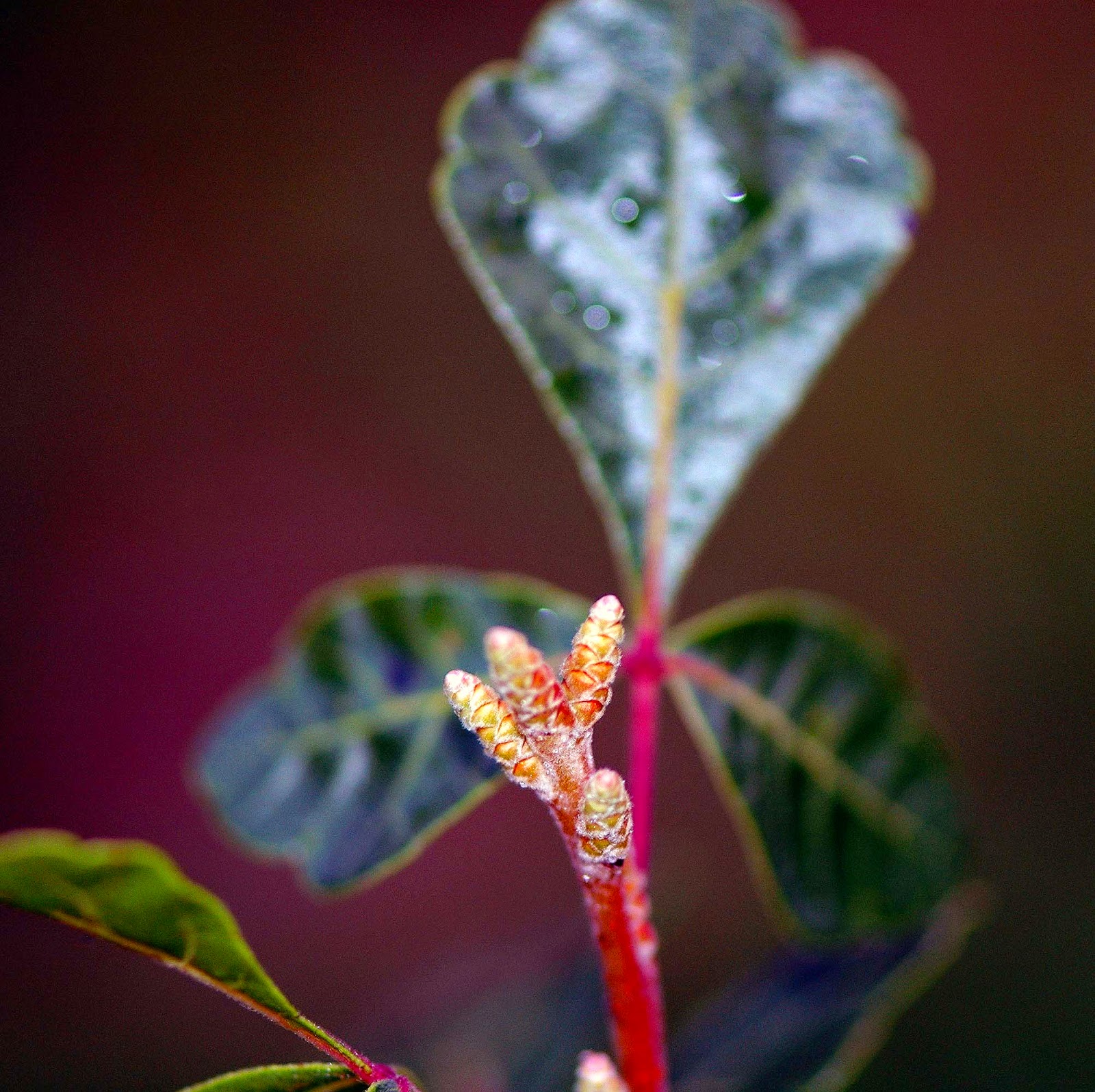 Fear not. Once you see red fruit, you know you're safe. There may be a slight peach-fuzz on the fruit, but this species forms round clusters of drupes, not pyramid shaped like the others. It's widely scattered in the state, but if you live in a county with a major river system, you probably have it. Also look for the heavily scaled catkins growing at the top of the plant. 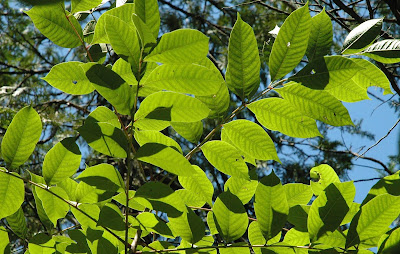 Last  but not least is the species you need to watch out for. With leaves growing high above your head, you may bump into this without knowing it. Poison Sumac, Toxicodendron vernix. 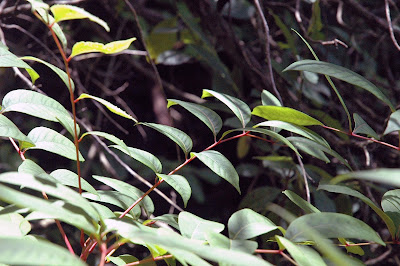 The leaflets are fewer than Staghorn or Smooth. If anything, they look more like Winged Sumac, but without the wings. The leaflets tend to be broader than those three species, ending in a fine tip. I also notice the leaflets look further apart than other sumacs. 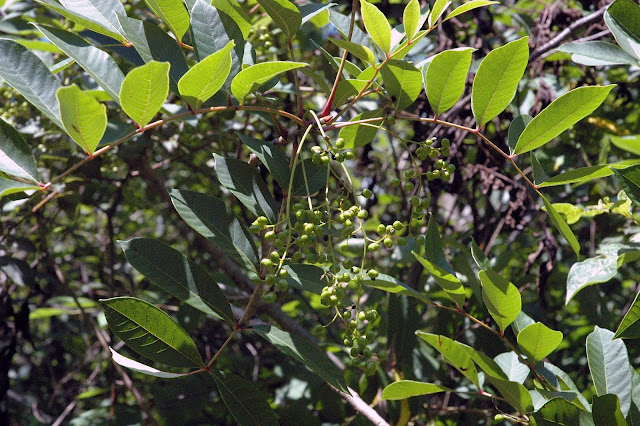 The key feature is the fruit. First, it turns from green to WHITE. That's one reason it's in the same genus as Poison Ivy. The other thing to look for is that the fruit droops downward, away from the plant. This  plant causes the same rash as Poison Ivy, and depending on your skin, many people have more severe reactions to this than P.I. The most frequent areas for this are the entire N.E. portion of the state, but it will be found anywhere there is a swamp.
Posted by DenPro at 4:45 PM