After a site selection, clearing, plowing discing, burning and planting, one simply has to wait and see what comes up. An early species of plant is the Gray-headed Coneflower, Ratibida pinnata. This is one of the first plants to have come up from our seed packs. They say it does well with competition, but I have noticed that after a few years their abundance tends to lessen. The flower heads start green, turn to gray, and then brown when in full bloom. The yellow rays droop down below the center heads.

This narrow leaved plant is Green Milkweed. There are other milkweeds with that common name, but this one is Asclepias hirtella. It is sometimes called Tall Green Milkweed or Prairie Milkweed. The flowers are greenish white and bloom in globe like umbels. 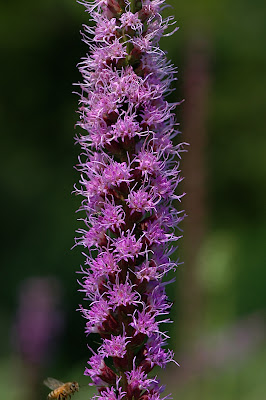 Liatris spicata, the Spiked Blazing Star. For sheer beauty and showiness, I rank this as my all time favorite prairie plant. This is one of the largest of the species in Ohio. It also goes by the name Marsh Blazing, Dense Blazing Star, or Gayfeather. 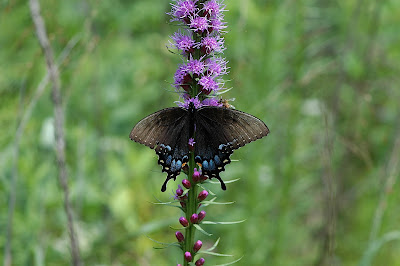 Butterflies like this dark form Tiger Swallowtail are attracted to Blazing Stars. In fact, in my experience, no other group of flowers attracts more insects on a prairie then Liatris. These plants have corms on their roots, bulb-like structures that break apart and help spread the plant. After ten years we decided to plow a new plot of ground with just a few of these growing, and afterward their numbers quadrupled. 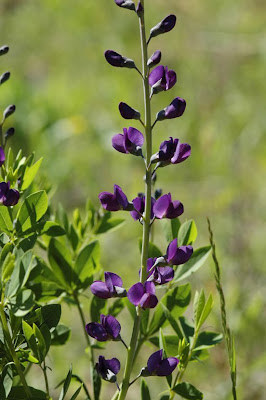 White Fasle Indigo, Baptisia alba. The False Indigos are easy to establish on a prairie plot. They add nice color in the springtime to an otherwise still dull looking prairie that doesn't peak till midsummer.

Being members of the Fabaceae, they produce these pea pods. They turn from green to black. They sound like a rattlesnake when shaken. Many people like to scarify seeds from the pea-bean family. Scarification involves putting them in tumblers or scraping the seed coat with sandpaper to make germination easier. I have never done that, and still had success with members of this family. 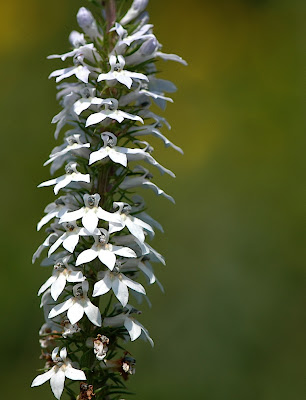 Spiked Lobelia, Lobelia spicata. This is a rather showy plant, especially when the flowers are so compact like this. They may be white, light blue, or even lavender. As the name implies, the flowers are clustered in a long spike. The upper part has two lobes, and the lower lip splits into three. They are members of the Bellflower family, and the stem will appear angled or square. Unlike some of the smaller Lobelia species, this one can reach 2-3 feet in height. 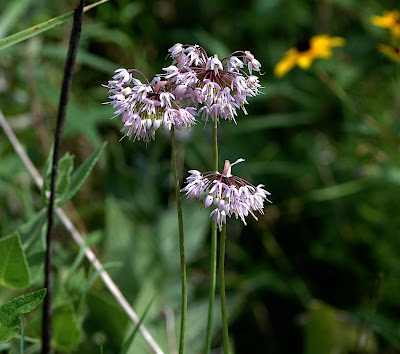 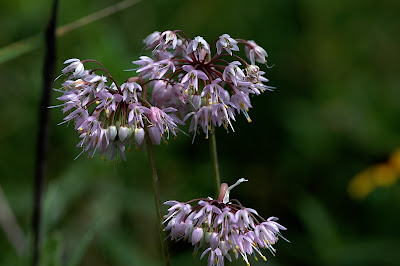 There are a lot of wild onion and wild garlic species out there, but the Nodding Wild Onion of prairies Allium cernuum, I think is the most striking. The upper stalk is bare, but look for long grass like leaves further down the plant. Crushing the leaves will give you the typical scent one expects. Like other onions, they form a round umbel of flowers. Upon maturity they point downward. This upside down habit tends to restrict which insects will land on it. It's said they prefer moist soils, but I have no problem with their survival on our dry site. 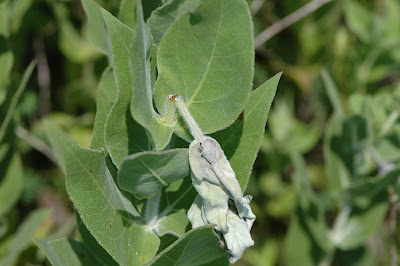 One of the problems with setting up a prairie is the possibility of insect pests. You'll notice the head of this Downy Sunflower Helianthus mollis, has been cut off. This is caused by a beetle. 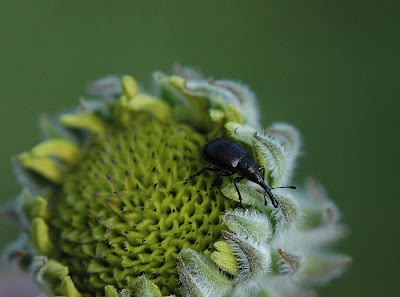 You can tell by the elongated snout that this is a weevil. In fact the common name is the Head-clipping Weevil, Haplorhynchites aeneus. They search out sunflowers and other plants. Then they will chew the stalk below the flower. As it dies it will deposit eggs in the wilted flower head. The grubs will feed on the plant tissue and hatch into adults the following year. 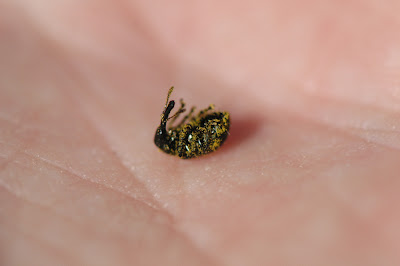 The adults will feed on pollen. When handled, weevils commonly fold up and play 'possum' like this. I've tried to collect and remove every broken flower head, but once they fall to the ground, the task becomes impossible. They have been a serious pest on our prairie. At least they have stayed on Downy Sunflower and not moved to other species. 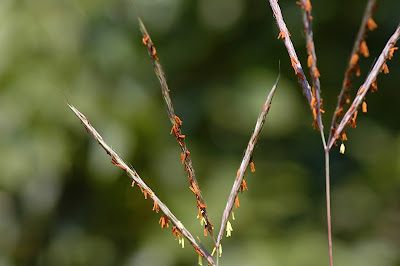 Besides wildflowers, certain grasses are part of any traditional prairie. This is the most common species, Big Bluestem, Andropogon gerardii. This turkey-foot grass is quite showy when blooming. 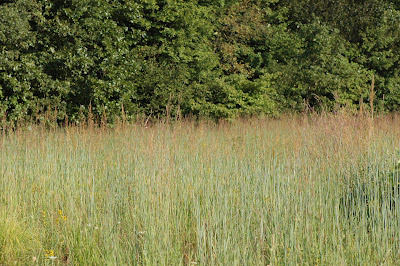 Another common species is Indian Grass, Sorghastrum nutans. The stems are a light blue and very similar in appearance to Big Bluestem. Up close, the flowers are very different. 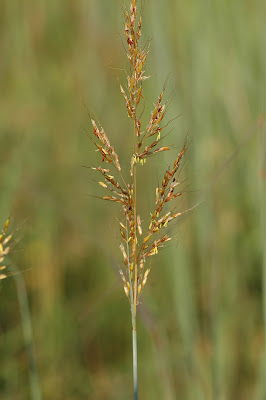 The stem, or culms, will produce flowering heads or spikelets that are bright yellow and orange. They don't grow in threes like Big Bluestem, but occur in a spreading panicle. 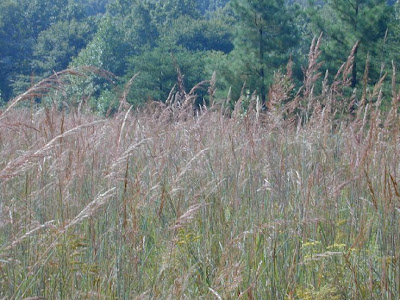 Here is a field full of Indian Grass. This and Big Bluestem are very tall grasses. It is said that Bison could graze in these species without being seen. 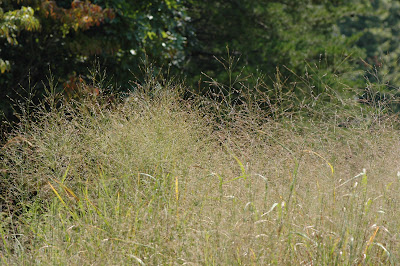 A third member of the tall grass prairie is Switchgrass, Panicum virgatum. As with most panic grasses, the flower heads are wide spreading. Switchgrass has been planted as a forage crop and for use as a wildlife cover. 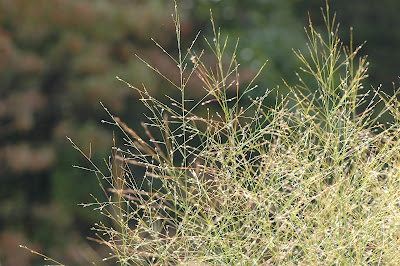 Switchgrass will grow on soils too poor to raise soybeans or a corn crop. This species has been considered for several years now as a potential biofuel. Its energy output is far above that of corn. 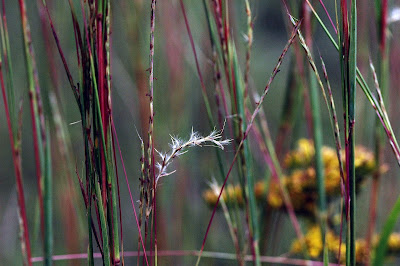 I could list a lot more prairie grasses, but then I'd just be repeating too much of the information from the grasses post. I'll stop at this fourth species known as Little Bluestem, Schizachyrium scoparium. Look for those Christmas colored red and green stems. The seed tufts hang outward away from the main stem. These seeds occur on a single stalk. Big Bluestem, though related, sends out its seeds on three or more stalks. Little Blue is an appropriate name, as it grows much shorter than the previous three species, reaching only 2-3 feet.

A common plant in our area is the small Dwarf Larkspur, Delphinium tricorne. Less common is this Tall Larkspur, Delphinium carolinianum. In fact you won't find it unless it was put on a prairie. This is a species found further west and south of Ohio. The following photos are of species found west of Ohio in the Great Plains states, as well as a few species that, if in Ohio, do better in what are known as 'wet prairies'. 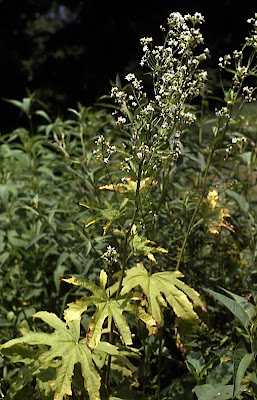 Glade Mallow, Napaea dioica. This is an uncommon species here. It occurs in just a couple of states east of Ohio. Its primary range is from Illinois to Minnesota. From a distance the flowers appear like something from the Mustard family. Up close you'll find they actually have 5 petals. The leaves are highly dissected and somewhat resemble a Sweetgum. This plant prefers moist to wet soils. 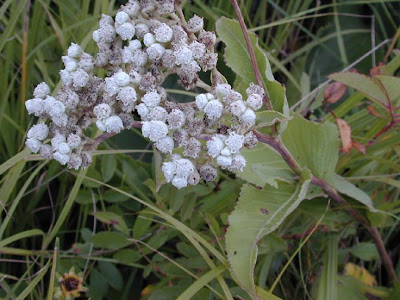 Wild Quinine, Parthenium integrifolium. A member of the Asteraceae, the flower clusters are white, and the rays, though present, are very reduced in size. Like I mentioned above, if you just walk past this plant without close observation, you may mistake it for Peary or Sweet Everlasting (Anaphalis). The leaves are coarsely serrate and appear sessile, but they do have a very small stalk. While not the same as the Quinine medicine used to fight malaria during war time, it was manufactured as a drug substitute. 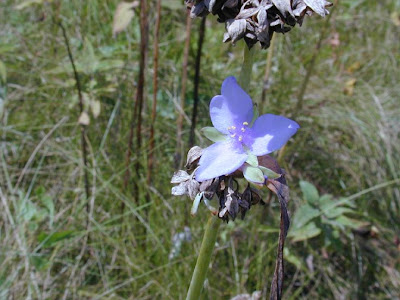 Ohio Spiderwort, Tradescantia ohioensis. Don't let the name fool you, this plant is found from the east coast across to Texas. It is common in both dry and wet prairie sites. If you examine the stem just under the flowers, you'll find it to be smooth or glabrous. A similar looking prairie species has hairy stems. 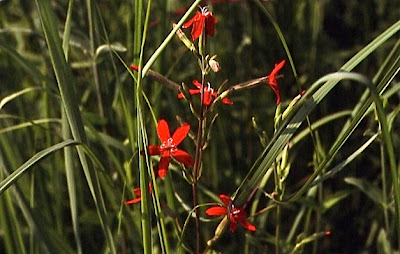 Here is the fourth species in a row that I've mentioned the need for close observation. This looks like our common Fire Pink Silene virginica, but is actually Silene regia, the Royal Catchfly. It grows at least a foot or two higher than Fire Pink. The petals on this species are NOT notched, and of course this is a prairie plant. It can grow in both dry or moist sites. Because of the long tubular shaped flowers, it attracts butterflies, moths, and hummingbirds more so than bees or wasps. The name comes from the sticky stems that resemble flypaper. Some people say this is an easy plant to establish. I've talked to other prairie managers who have difficulty with it because it is so shade intolerant. 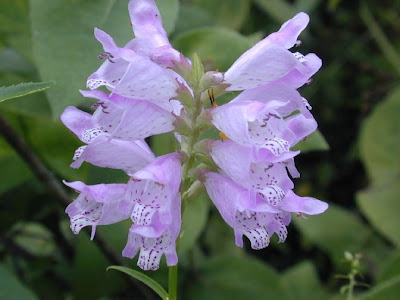 Obedient Plant, Physostegia virginiana. By no means is this a prairie restricted plant, but it's so beautiful I had to stick it in here. While you will find it in wet prairies, it can grow in any wet bottomland. The name comes from the fact you can move the flowers in a different direction, and they stay there! The irregular flower shape and square stem puts this in the Mint family. 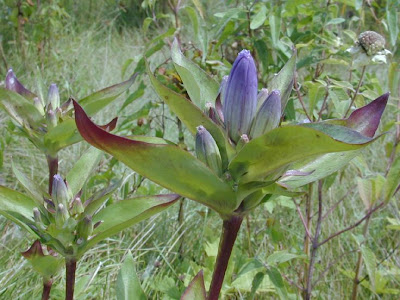 Gentiana andrewsii is one of the Bottle Gentians. The flower parts are in fives, but that's difficult to tell because they don't open their petals the way Fringed Gentians do. Not that it would matter, Fringed Gentians are only four petaled. Look for a cluster of leaves near the top that appear almost whorled. You'll find this in wetter soils, not only on prairies, but in fens. 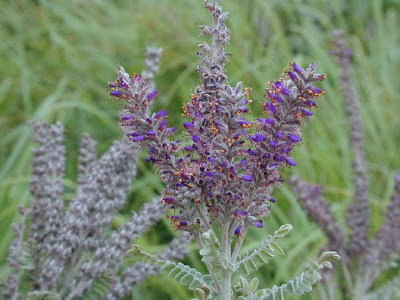 Leadplant, Amorpha canescens. This plant has compound leaves similar to Locusts. I don't believe it is native to Ohio. I photographed this in Iowa, the center of its range. Being a member of the Fabaceae, it has nitrogen fixing bacteria on the roots, so it will occur in any type of prairie soil. This is one of those species they suggest scarifying the seeds. 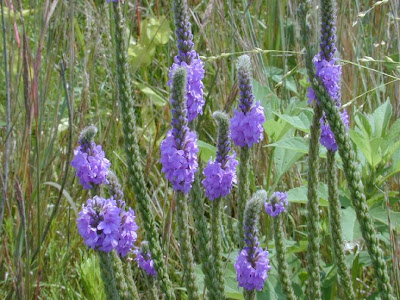 Here's another showy plant I found in Iowa, the Hoary Vervain Verbena stricta. It has a wider range than many species I've listed, covering almost all of the country and half of Canada. It doesn't do well with competition, which may be why I've always seen it in early established prairie sites. 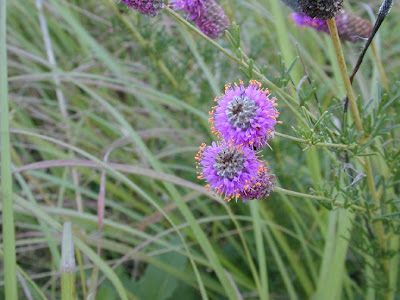 Beauty is in the eye of the beholder, but I think you can see my taste. These are some of my favorites, and the Purple Prairie Clover is yet another. Dalea purpurea has a wide range also, but I've yet to see it in Ohio. The leaflets are in threes or more, but are so narrow they wouldn't remind you of a typical clover. The flower heads are in short spikes that bloom from the bottom up. The purple-pink petals contrast brilliantly with the orange colored anthers. It only reaches a couple feet in height, and like the previous species it prefers open sunlight. 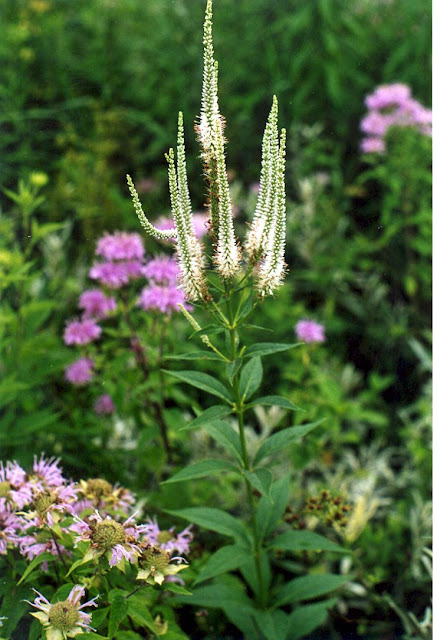 Culver's Root, Veronicastrum virginicum. This 5 foot species occurs from the east coast to the tall grass prairie region. The tall white spikes with widely spreading stamens may superficially resemble flowers like Lizard's Tail or Canadian Burnet. Look for the whorled leaves to easily separate it from anything else. It is most common in moist to wet soils, but by no means restricted in where it will grow.
Posted by DenPro at 1:25 PM