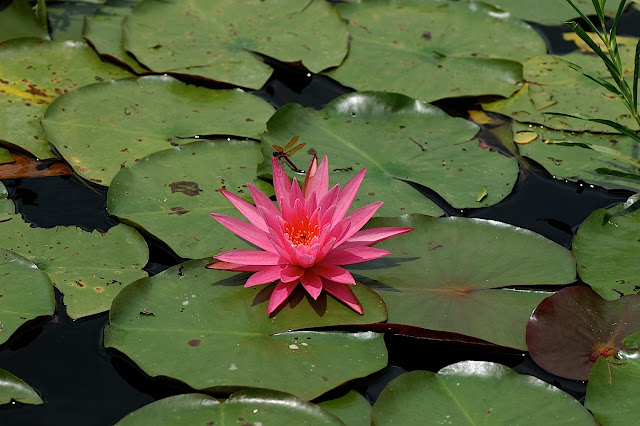 Ooooh how pretty. Well that's the only reason I put it in here. Bet it caught your attention. Too bad this is an exotic species that doesn't belong here. This Pink Water Lily has tons of varieties, and I wouldn't even venture to try and narrow the species down. Lake Hope State Park is full of these in the summer. 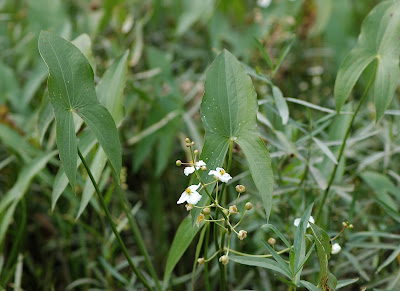 Common Arrowhead, Sagittaria latifolia. While the leaves are variable, they usually end in these sharp downward pointing lobes, giving it the shape of an arrowhead. These are common in shallow marshes, and are important species in waterfowl management. 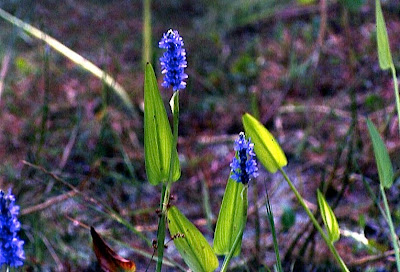 Often growing alongside arrowhead is Pickerel Weed, Pontederia cordata. It prefers shallow marshes. The plant has unlobed leaves and the flowers occur in a spike. Although native, it has a tendency to sprawl and take over an area. Water Hyacinth of the south also has blue flowers and is in the same family. It is very invasive and undesirable. Unlike Pickerel Weed, it has leaves that float on the water surface. 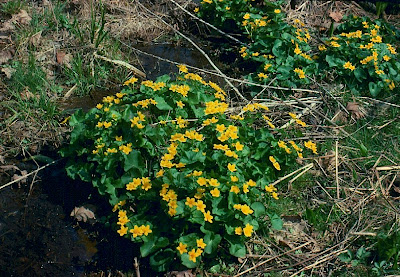 In early spring look for Marsh Marigold, Caltha palustris. The five petaled flowers grow in bunches like this in either marshes, boggy areas, or clean fresh water seeps. Look for it most often in open sunny areas. 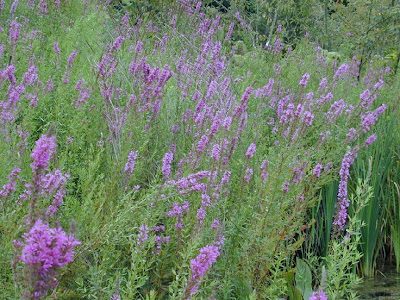 "Is this the wildlife officer? This is a garden club member, please go down to the marsh and tell those people to stop removing our beautiful purple flowers." Yes, this has happened. Never mind the use of the word "our",  educating people about the threat of invasive species is now a part of ALL natural resource agencies. It's funny how wildlife management students say they chose that over nature interpretation because they don't want to talk to the public. Boy are they in for a surprise.

Dominating much of our marshland around the Great Lakes is the exotic Purple Loosestrife, Lythrum salicaria. It blankets areas in solid patches, not allowing room for any native species to flourish. Unless you're manipulating water levels, burning, mowing and herbicide won't work. Several species of beetles have been introduced to feed on the plants, but the best way to control it is to get down to the roots and pull them out. Once restricted to northern Ohio, I have seen it down here in Athens County, and clear over in Cincinnati. It is said a large plant can produce 2 million seeds a year, so you can see why we have our work cut out for us. 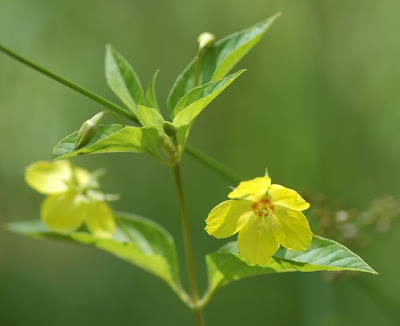 There are a lot of other native Loosestrifes in Ohio, including another purple one. This is a very common one found not only in wetlands, but any moist soil on woods edges. Fringed Loosestrife, Lysimachia ciliata. The tops of each flower petal end in a fine tip. The flowers usually droop downward. 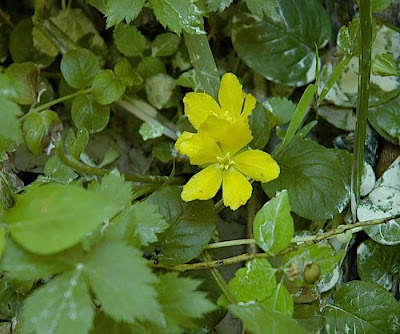 Another Ohio Lysimachia is L. nummularia or Moneywort. It has small rounded leaves, much like that of Partridgeberry, and can form solid carpets on mudflats. It is non-native, and considered an escape from plantings. The common variety used in gardens is called Creeping Jenny. 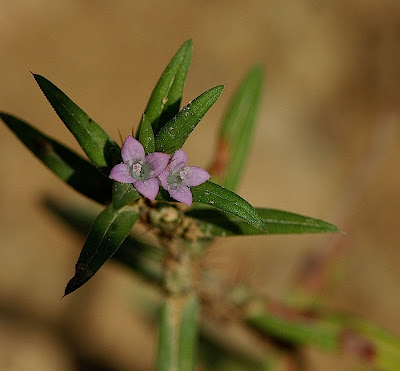 Speaking of Partridgeberry, here is a member of that family, Buttonweed, Diodia teres. You nearly have to get down on your hands and knees to find this. It's quite small, the bloom is barely 1/4 inch across. The leaves are narrow or linear, and are sessile (no stems). I have found huge patches of this in dry pond beds, but being weedy, they are found in most habitats, including dry areas and disturbed sites. 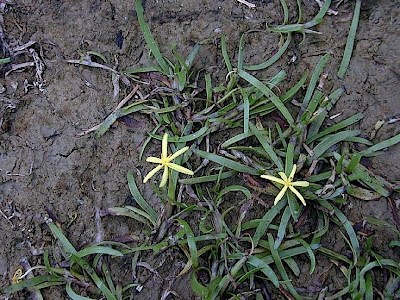 Another member of the Pickerelweed family is Water Stargrass, Heteranthera dubia. It ranges from New England into the prairie states, and scattered locations further west. Look for this also on mudflats or in shallow waters of lakes. This is different than the Yellow Stargrass found in upland hillsides. 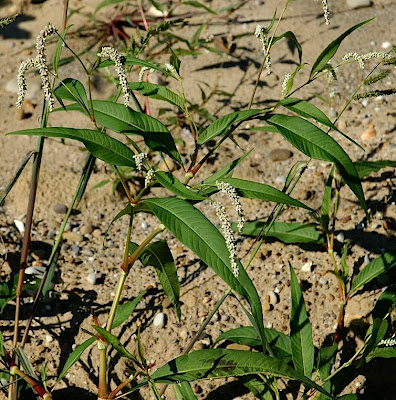 Nodding Smartweed, Polygonum lapathifolium. The flowers on this species tend to hang downward. For anyone who wants a challenge, tackle the genus Polygonum. Flowers can be erect or drooping, thick or narrow, pink or white. Usually you have to examine the sheaths on the stem for exact species I.D. Smartweeds are desirable in wetlands and are very important foods for waterfowl. 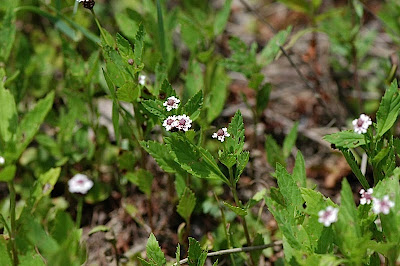 Another wetland plant often stepped over because of its small size is Phyla lanceolata. Known as Lippia, Frogfruit or Frogbit, it's a Verbena family relative. As with many of the plants mentioned, it can also form dense thickets on mudflats and shallow water areas. Individual flowers are irregular in shape. They are white to pink, and clustered around a maroon head. The small fruits are fed upon by ducks. 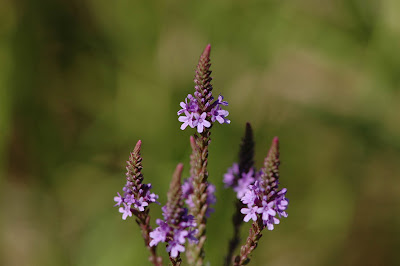 A much showier member of the family is Blue Vervain, Verbena hastata. Look for this in flatlands and wet ditches. This plant can reach 4-5 feet in height, and it has a square stem. Blue Vervain has a long list of historic uses as a home remedy, but like many herbs, it has no solid scientific proof, and therefor has never been approved. 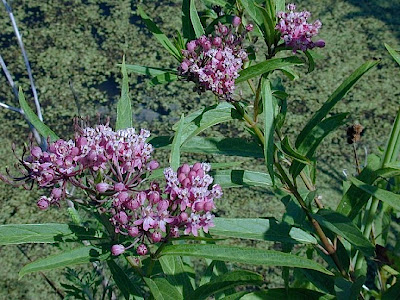 A large showy plant of wetland edges is the Swamp Milkweed, Asclepias incarnata. One of the few milkweeds found in wetlands, it has much narrower fruit and leaves than our Common Milkweed. The flower tops are white to pink, and the bottom portions pink to purple. The blooms attract many butterflies, and of course the Monarch feeds on the leaves. 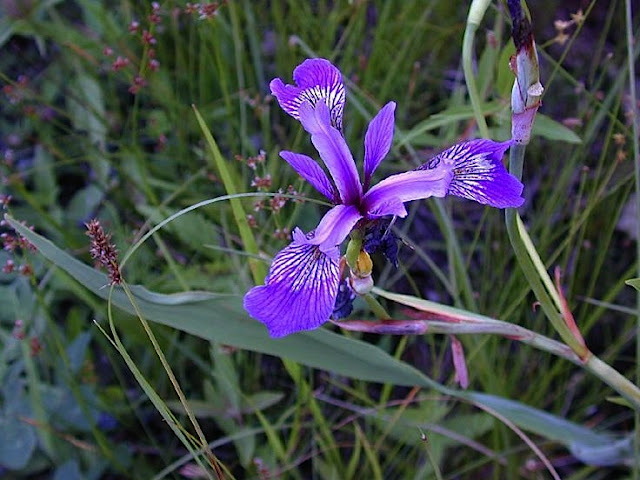 Is it me or what, but seeing an Iris growing in a sedge meadow or along a shoreline does something that a garden variety just doesn't do. This is the Large or Northern Blue Flag, Iris versicolor. The beautiful color of this is made up of both petals and sepals. The very similar Southern Blue Flag, Iris virginica is restricted to the Gulf and Atlantic coast states. 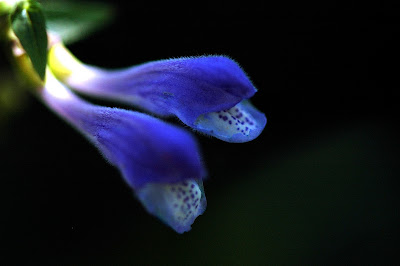 Whether you describe them as helmet shaped, dragon shaped, or snakeheads, the Skullcaps are an interesting group of plants. This is one of the larger blooming species known as Marsh Skullcap, Scutellaria galericulata (epilobifolia). Generally they are 2-lipped, blue tubular shaped flowers. These square stemmed plants are members of the Mint family. 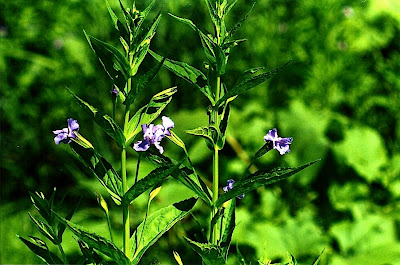 Similar in size and appearance is the Square-stemmed Monkey-flower, Mimulus ringens. More closely related to Figworts than Mints, the flowers are also blue-purple, but lack the 'hood' shape of Skullcaps. They are quite common in wet soils during the summer. 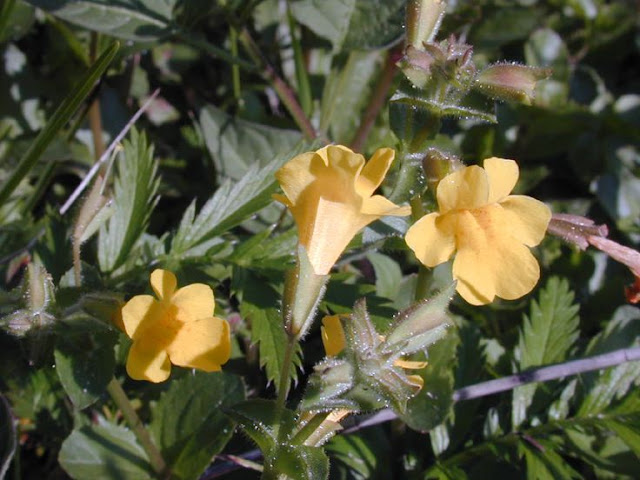 It's not often I get to find a real gem like this. You are looking at Michigan Monkey-flower, Mimulus michiganensis. Formerly a M. glabratus variety, it has been elevated to species level. This is an endangered species known from maybe 12 locations along the coastline of Michigan. This batch is from Beaver Island, where I spent a lot of time studying the flora and fauna. This population is found along a freshwater spring , and luckily in a protected area.
Posted by DenPro at 7:55 PM