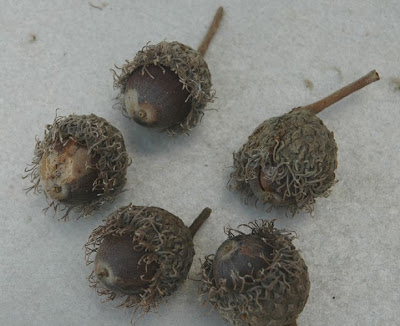 Everything in nature is cyclic, and this autumn has provided an abundance of woody plant fruits such as this Bur Oak, Quercus macrocarpa. 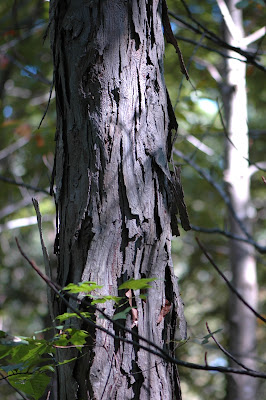 Showing long warped strips of bark peeling away from the trunk is characteristic of Shagbark Hickory, Carya ovata. Shagbark fruits are edible, and are second only to the more popular Pecan, Carya illinoinensis. 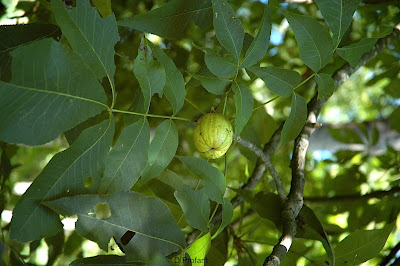 Having a trunk nearly identical to Shagbark is the Kingnut Hickory or Shellbark, Carya laciniosa. 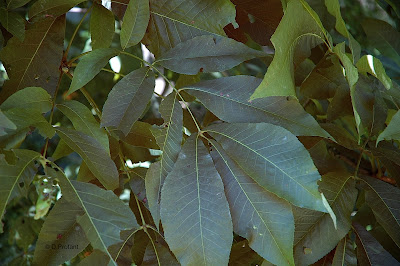 While Shagbark can grow anywhere, Kingnut is restricted to wet bottomland soils. Where the two grow together, Kingnut shows 7-9 leaflets, and Shagbark most commonly has only 5. 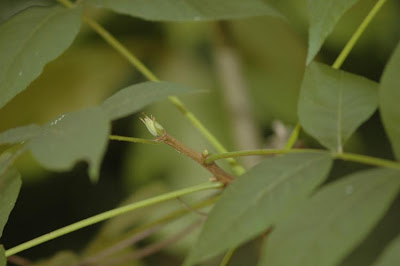 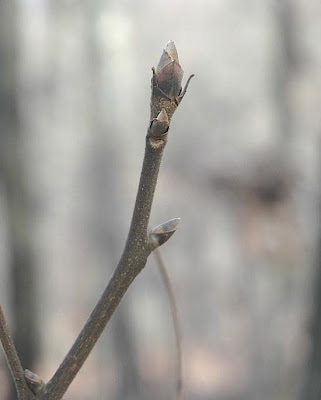 One of the most reliable ways of separating the two is by the twig. The first pic is that of a young Kingnut whose bud is still green. With age the outer scales will darken, and the inner scales will stay white, just like the second picture. The Kingnut has a twig that is tan, beige, or flesh-tone, sometimes with a speckling of orange.  The Shagbark twig is dark brown and Clint Eastwood, or "dirty hairy". 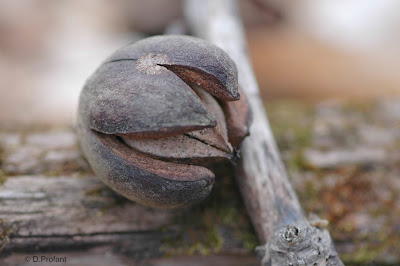 Another edible hickory is the Mockernut, Carya tomentosa. The edible portion is protected by two shells or husks. Notice also how hickory fruit splits open along fissure lines. 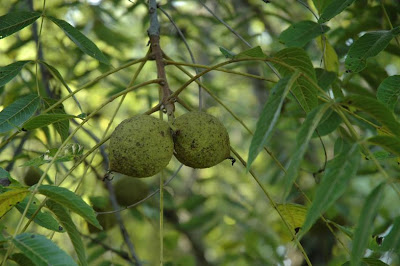 Hickories are members of the Walnut family. This is the Black Walnut, Juglans nigra. They produce yellow-green, tennis ball size fruit that does NOT split open. When they hit the ground they begin to turn black. The outer husk then rots away. Our walnuts are every bit as edible as those you buy in the store, (the English Walnut). Be careful if you use your fingers to open them, as they contain a brown-black dye that will stain your hands. 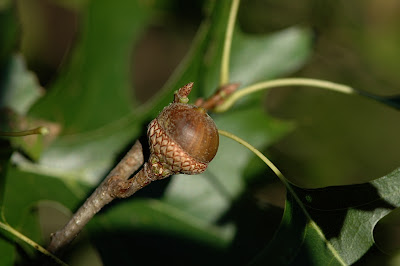 We have a vast array of oaks in Ohio. The Pin Oak, Quercus palustris, is more common in the northern portions of the state.  With many oaks, the young acorns are covered in a layer of fuzz. 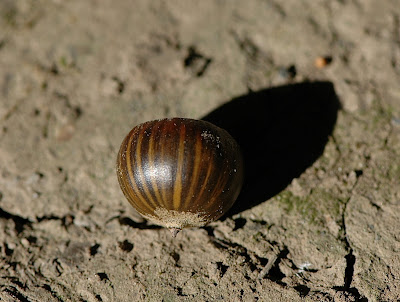 With age the fuzzy coating wears off. While other acorns can show some striping, the Pin Oak has the deepest dark and light "watermelon" stripes of all. 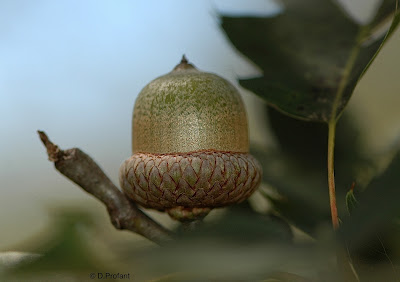 With flat caps covering only about a third of the nut, and a fat pumpkin like acorn, this has to be Red Oak, Q. rubra. Besides having bristle tipped leaves, members of the red oak group have snake skin like scales on their acorn caps (or cups). The red oak members drop their acorns every other year. 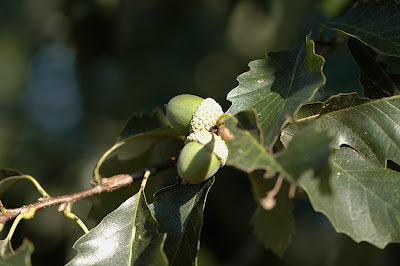 The white oak species on the other hand have round lobed leaves lacking bristle tips. The scales on their acorn caps have raised bumps and appear warty.  The fruits drop annually. This is Chinquapin Oak, Q. muehlenbergii. 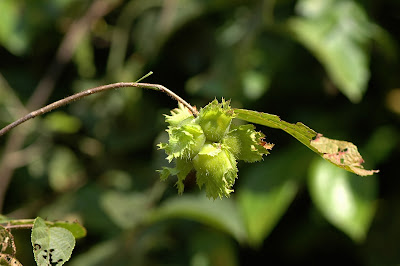 Contained inside these green husks or bracts is the American Hazelnut, Corylus americana. Whether using a nut cracker and eating them whole, or crushing them to flavor coffee, our native species is as edible as the European one. 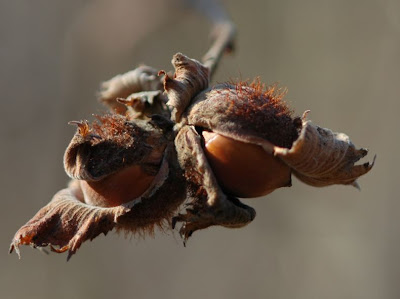 With age the green bracts will turn brown, curl back, and expose the fruit. If the nut looks familiar, the European Hazel I referred to is better known as the Filberts Nut. 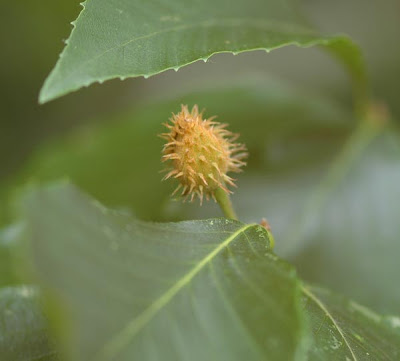 Contained inside this bur-like husk are two 3-sided nuts. This is the American Beech, Fagus grandifolia. These are the fruits commonly used for that "beech nut flavor". All of the "hard mast" fruits I've mentioned above are important wildlife foods of forest dwelling animals. 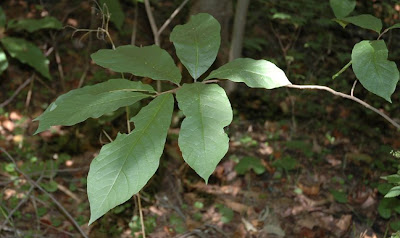 Having leaves nearly a foot long, and looking more like a tropical plant (of which it's family the Custard Apple is), the Pawpaw, Asimina triloba, is one of the most sought after edibles in our area. Everybody has their secret patches, and harvests take place in early to mid September. 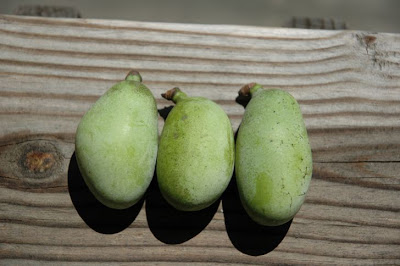 We even have a pawpaw festival in our county to celebrate this fruit. Looking like a mini cucumber, the "poor man's banana" as it's often called contains flat lima bean-like seeds that are easily removed. One should never try to describe a taste, but for me it has the flavor of something like a cross between honeydew melon and banana custard, mmm mmm good. 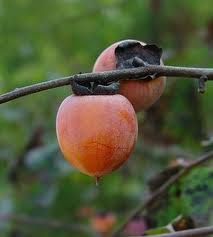 While I have lots of photos of twig, bark, and leaves, I find my fruit shots missing. Giving credit where credit is due, this picture is from the Saunders Brothers website. I just couldn't post a fall fruit blog without including the most popular edible after pawpaw. This is Persimmon, Diospyros virginiana. Japanese persimmons are sold in stores, but our wild species is very edible, tasting something like an apricot-peach mix. Make sure the fruit is soft when squeezing before eating it. If you are into practical jokes or dirty tricks, give a friend a hard unripe one. Their mouth will suddenly turn dry and they'll get cottonmouth. Of course they may not be your friend for long after that! 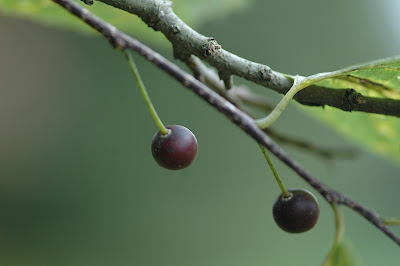 Looking like purple berries, the drupes of Hackberry are not edible. Hackberry, Celtis occidentalis, for years was put in the Elm family. Though the fruits are different than elms, all other morphological characters were similar. Hackberry is now a member of the Cannabaceae family. I simply won't argue the validity of the change, but I can't ever remember seeing  any Cannabis with fruit like this. Um, I mean, that's what I've read anyway.  :) 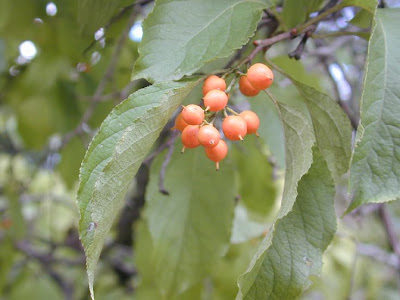 American Bittersweet, Celastrus scandens. These orange capsules will split open and expose bright red seeds. When people ask me what it tastes like I say, oh bitter-sweet.  I'm kidding, don't eat it, it's poisonous. Being a climbing vine, it is often used to make wreaths, and is an important wildlife food. Foresters tend to hate it because it will wrap around tree saplings and choke them to death.  Many of the curled walking sticks you see are a result of this plant. 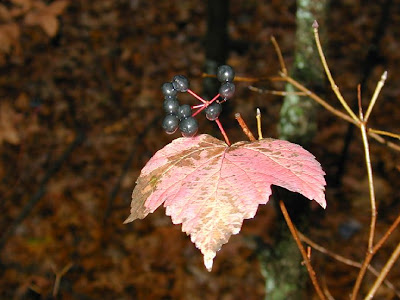 Other important wildlife foods are the Viburnums. Their fruits are not as sugary as others and will persist on the plant late into the season. This makes them a good food for wintering birds. This is Maple-leaf Viburnum, Viburnum acerifolium. Unlike Maple-leaf, another common species, the Blackhaw, V. prunifolium is edible to humans, and tastes like raisins. 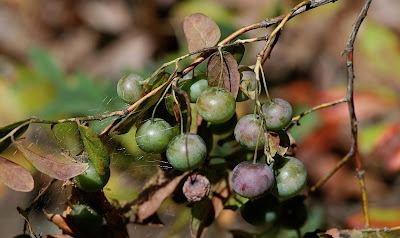 Wild blueberries? Yes we have them, and they are tasty. This is Deerberry, Vaccinium stamineum. Look for white under the leaves in summer, and open bell shaped flowers in spring. Low Blueberry is our other species. V. pallidum (vacillans).  It has leaves green on both sides, and urn shaped flowers. Just west of us is a third species, the Highbush Blueberry V. corymbosum. 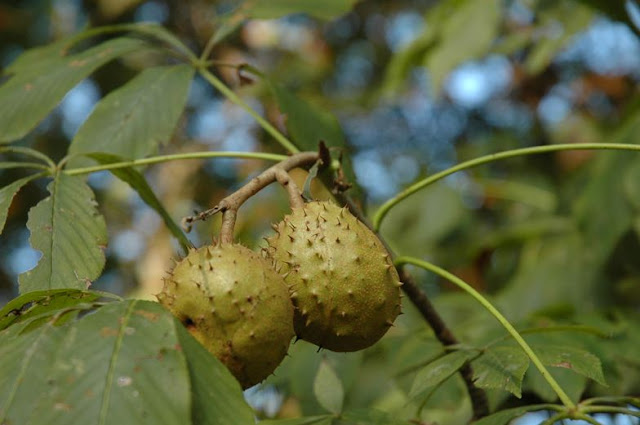 We are in the buckeye state, and this is Ohio Buckeye, Aesculus glabra. Look for the spiny husks. Less common, and restricted to southern Ohio is the Yellow Buckeye, A. flava. It lacks the spines on the husks. A common planted ornamental is the Horse-chestnut, which is also a buckeye. The fruits of all these are poisonous.  In fact I hear the OSU Buckeye is quite deadly to Wolverines. Hardy-har
Posted by DenPro at 12:56 PM