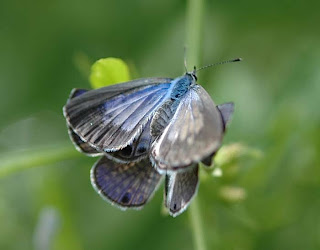 Being this is my first contribution, I realize I may cover material posted at other sites.  I have found that there are over 1,200 other nature blogs, and there is no way I can follow them all.  So welcome to my world.

What better way to start a site than with butterflies.  People like them, they are showy, and easy to observe during the day. On the other hand, I, being a moth man..... 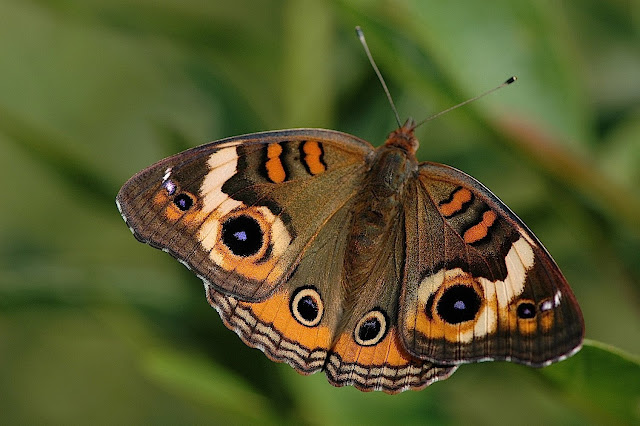 Nymphalidae, or the Brush-footed butterflies are probably the most diverse family and the easiest to recognize. Since we are in the buckeye state, let's start with a Buckeye butterfly. 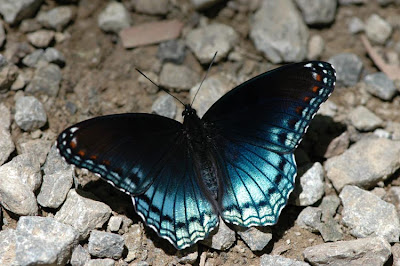 Red-spotted Purple. Notice the absence of tails. This should prevent you from thinking it's a swallowtail. 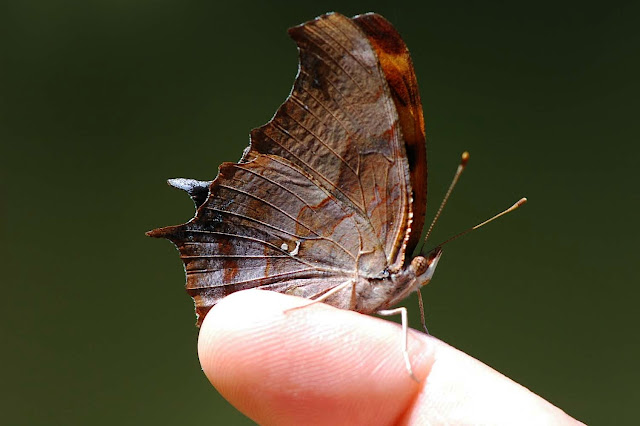 This guy had just fallen in the water and was a bit befuddled.  It sat patiently while gathering it's surroundings. The dot and dash in the hindwing make this a Question Mark. Remove the dot, and you have a Comma butterfly. These butterflies will commonly light on your neck or headband looking to feed on the salt in your sweat. 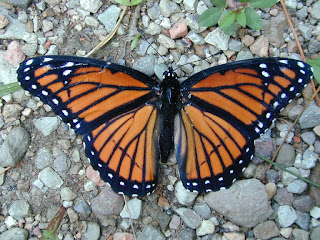 The Viceroy. We've all probably heard the classic story of how this resembles a Monarch. Because Monarchs feed on Milkweed, birds and other predators become sick when eating them. So when they see this, they "think" it's a Monarch, and leave it alone. What you may not know is that in the south a Monarch relative called the Queen is more common and much darker orange than this.  In the south, the Viceroys are also much darker. Coincidence? I think not.  Mimicry in action.

So how do you separate them?  Viceroys have 1-2 rows of dots on the wing edge, Monarchs 2-3. More reliable are the white spots in the forewings. They are orange-yellow in Monarchs. See the black stripe crossing the veins in the hindwing?  This is absent on Monarchs. 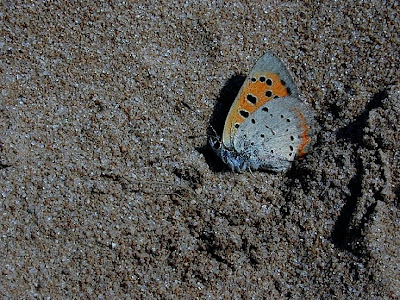 Lycaenidae, the Blues and Coppers. Here this American Copper seems lost in the sand.  Butterflies like loose sand and wet dirt because it's easy to probe for essential minerals. 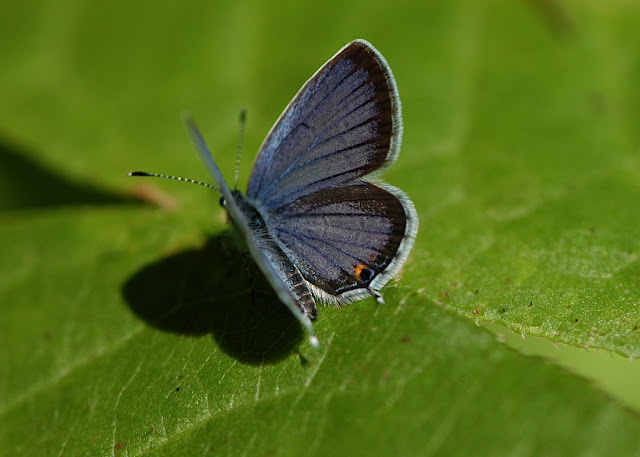 The Blues get their name from the inside portion of their wings. 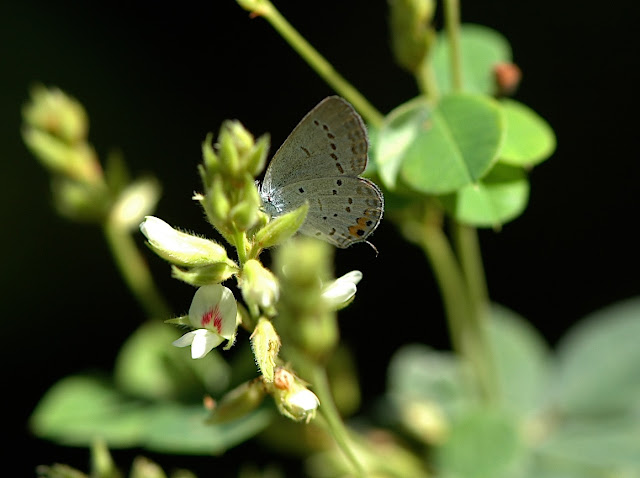 This is an Eastern Tailed Blue sitting on Bush Clover. 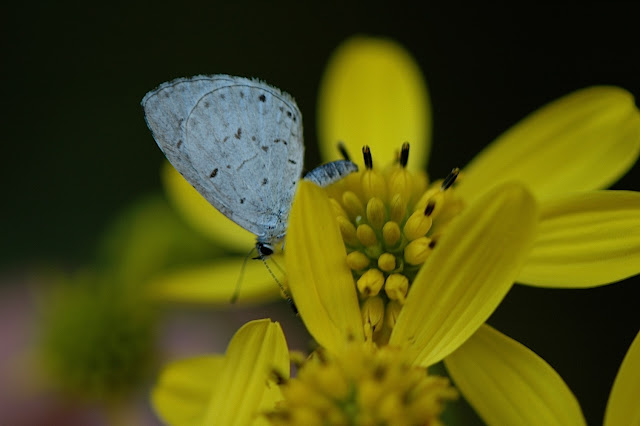 The Spring and Summer Azure are very similar both inside and out, but lack the tails. 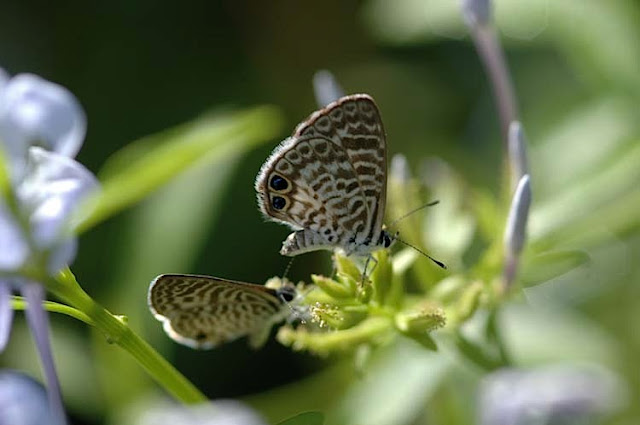 Some blues are heavily patterned on the back, such as this pair of Cassius Blues from Florida. 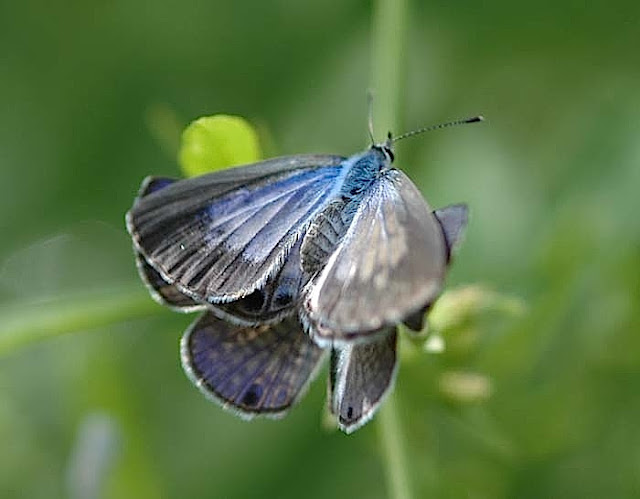 Here's the male hovering over the female while mating.

Also in this family are the Hairstreaks. These are rapid and erratic fliers.  Only when they land can you get a good look at them. They always sit with their wings closed. One of the most common species in Ohio is the Red-banded Hairstreak.


A rather uncommon species in Ohio is the White-M Hairstreak. They tend to stay in forest trees and only come out to the edges. As you can see this one is a bit ragged and torn up. It was having trouble flying and wasn't paying any attention to me. The wings on the inside are the most brilliant iridescent blue you can imagine. Reminds me of the Morpho butterflies of the tropics. I was happy to see this guy in the Zaleski forest.


Another common species in Ohio is the Gray Hairstreak. Compare the two pictures. Notice the longer set of tails straight, then crossed in the second picture.  When hairstreaks land they rub their hindwings up and down making the tails appear like antennae. Couple that with what look like two little black eyes, a predator thinks it's attacking the head region, thus allowing the butterfly to fly forward and escape.

Pieridae, the Sulphurs. Everyone is familiar with our three most common members. The yellow Clouded Sulphur, the orange Alfalfa, and the white Cabbage Butterfly.  Often overlooked is this little one, and yes it's called the Little Sulphur. I never used to see these around, but they have been popping up frequently in the past week. I found a couple of them puddling at a mud hole at Lake Hope.  You can recognize it by the small size and that orange spot on the hindwing. 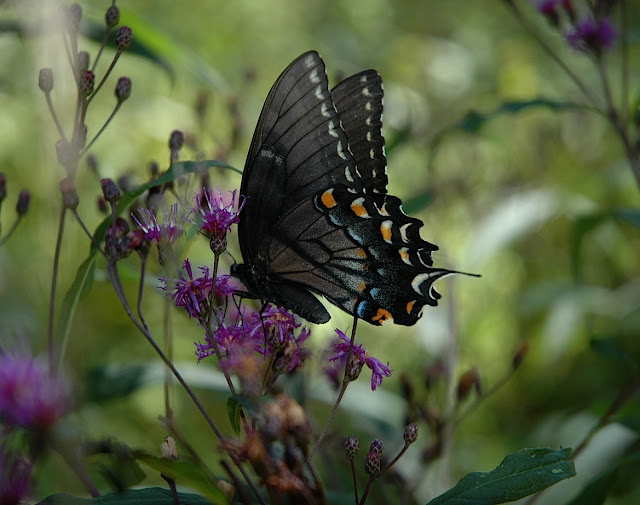 Papilionidae; the Swallowtails.  Oh I could put up pretty pictures of them all, but I'll limit it to one for now. The Tiger Swallowtail, usually bright yellow and black, often shows a dark form in some females. Even though it's all black, you can look through the wings and see the hidden stripes.
Posted by DenPro at 4:22 AM