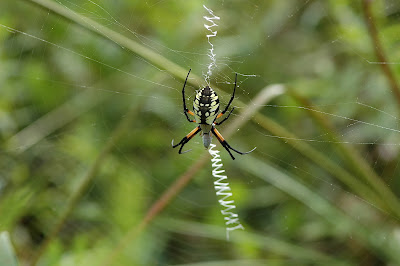 Spiderman, Spiderman, does whatever Richard Bradley can. Well it goes something like that. At the Natural History Conference, I finally got to meet Dr. Bradley. Although retired, he is swamped with a backlog of spider specimens. Knowing that, I greatly appreciate the time he has spent with me exchanging emails. My primary question of course, "Can you identify the 700 species in Ohio by photographs?" I already knew what the answer was, a resounding NO! So why am I bothering? Because the second part of that answer is "some of them, yes."

So I gathered many of my old photos and decided to put them together for a spider post. Some of the pics are new, and were previously stored as 'unknown'. With the help of Dr. Bradley, I'll get as close to a species as possible, and hopefully disseminate some new information. The above species is probably one of the easiest to recognize. The common Garden Spider, Argiope aurantia. This is one of the Orb Weavers. The picture is a female. The males are small, skinny, and drab in comparison. 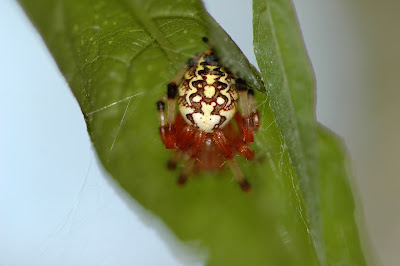 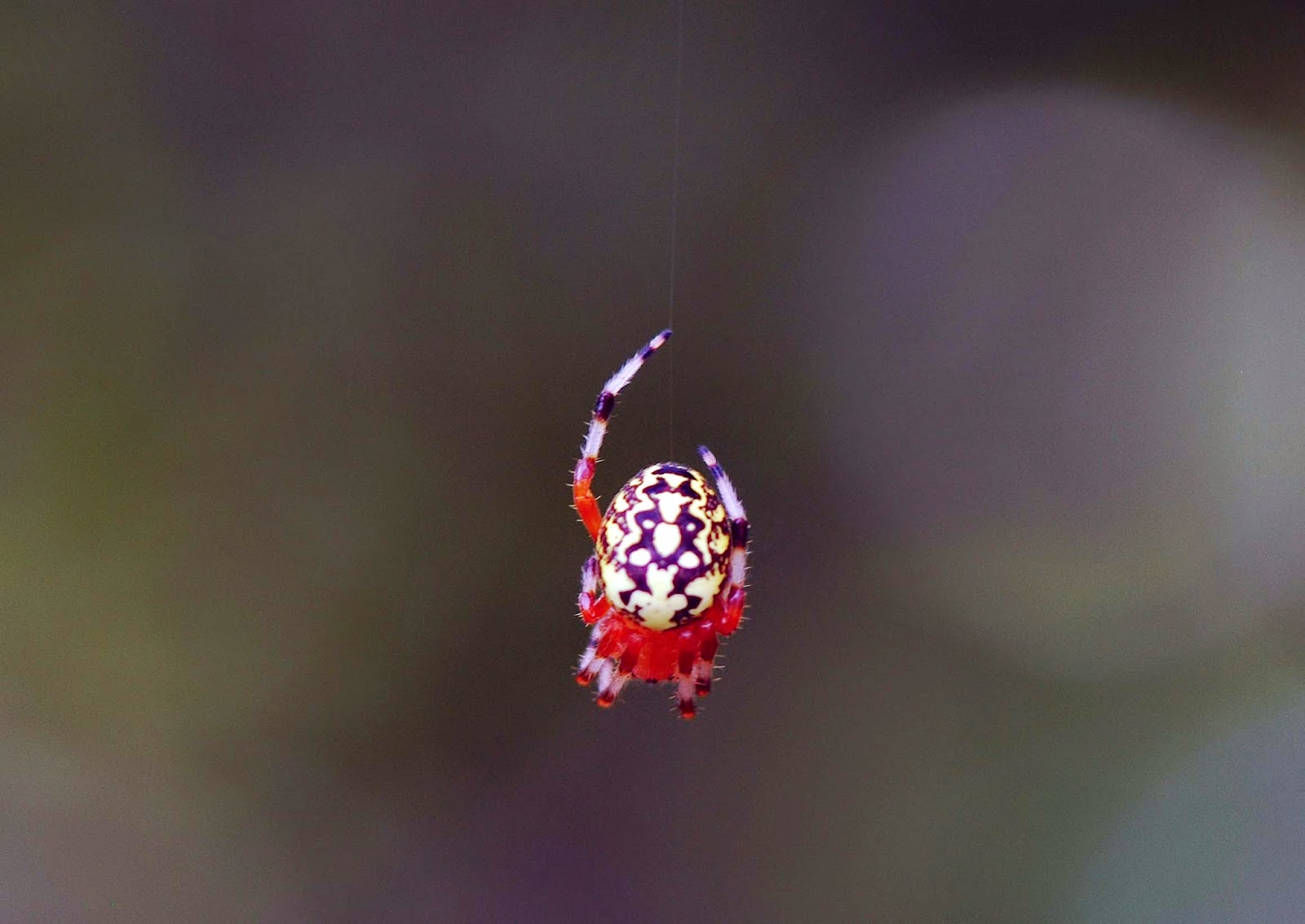 Here are some more of the common members of the Araneidae family. Marbled Orbweavers, Araneus marmoreus, are highly variable. They can be distinctly patterned like this, all brown, or just have a huge abdomen that appears like a yellow or orange ping pong ball. This is just one example of how color alone is not reliable. 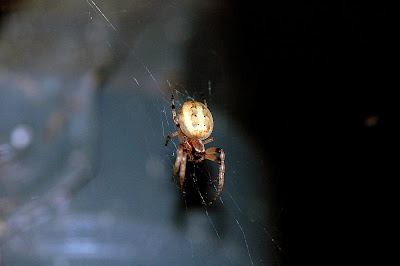 Furrow Orb Weaver, Larinioides cornutus. They only come out at night, and are common on buildings.

The Arrowhead or Triangulate Orb, Verrucosa arenata. The pointed yellow abdomen is easy to recognize, plus they almost always sit facing up in their web. 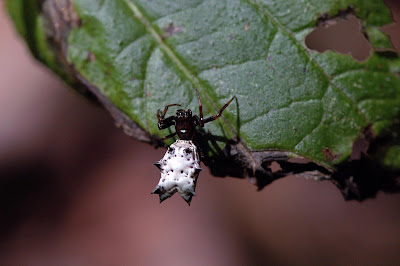 The Spiny Orb or Spined Micrathena, Micrathena gracilis. If I had a dollar for every face full of web I've received from these guys, I'd be retired. 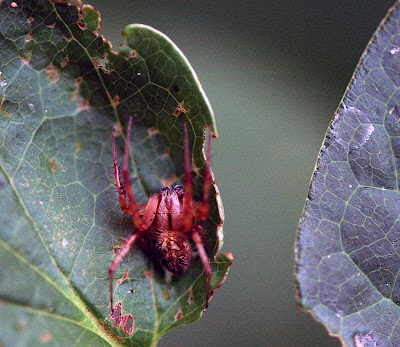 Neoscona arabesca or N. crucifera. Here's an example where a photograph can't narrow it down for sure. There are 4 species of Neoscona Orb Weavers in Ohio. They don't have a common name.

Spiders as a whole do not have established common names. You may see different names applied to the same species. Overall the vast majority have never been assigned any common name. 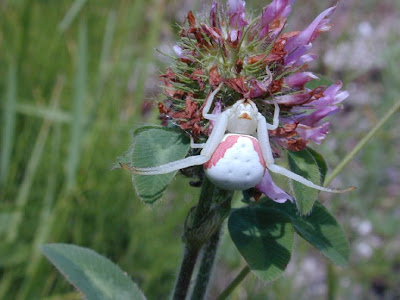 Thomisidae, the Crab Spiders. They can walk sideways, and they hold their two front pairs of legs in a semicircular shape like pinchers or claws. This is Misumena vatia, the Goldenrod Crab. This is one of several species that hide in flower heads while hunting. If you see a yellow crab spider with this pink stripe, it's the same species. 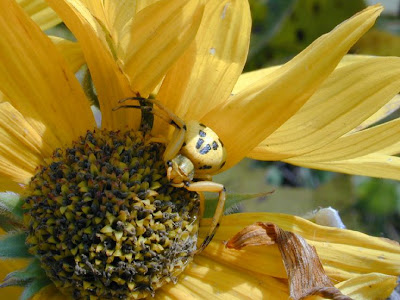 Speaking of yellow crabs, this is Misumenoides formosipes. Look for the black dots that form a V on the abdomen. Dr. Bradley also says the yellow line below the eyes is also important. 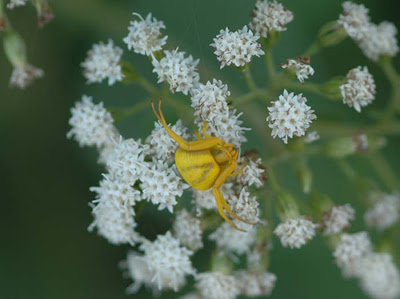 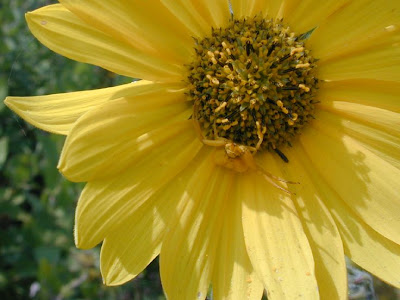 In these specimens, you can see that V shape beginning to fade out. There is a white form of this, and it's often called the Red-banded Crab Spider. The white spiders often have the dark spots colored red.


This little crab is Misumenops oblongus. I call it the Green Crab Spider, and yes, I just made that name up. I usually see it in forested areas rather than open fields. 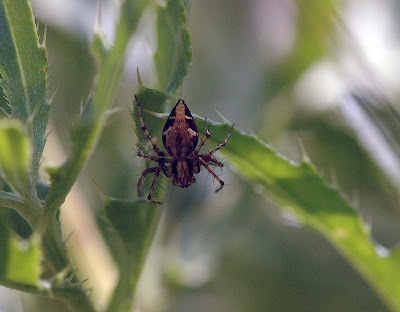 Oxyopidae, the Lynx Spiders. We have only two species in Ohio. The other one is highly striped. This is the Western Lynx, Oxyopes scalaris. The black marks on the body got me to the species. I narrowed to this family because of the long spines or setae on the legs. They are indicative of the group, but by no means unique to this family. 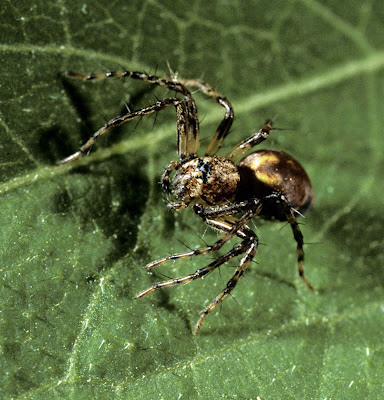 Dr. Bradley sent me this picture to point out another feature of spiders in the field. This is also the Western Lynx, but looks nothing like the above. The colors are washed and faded because this is in a pre-molt stage. Spiders shed their skin, just like insects and snakes. When a snake is ready to shed, it's eyes become opaque, and the scales all turn dull colored. The same thing is happening here. 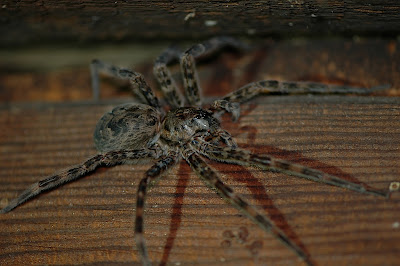 The gargantuans of all Ohio spiders, these babys scare the heebee jeebies out of people. Often called Wolf Spiders by mistake, this is a Nursery Web Spider, Dolomedes tenebrosus. Their large relatives you see around ponds are known as Fishing Spiders. 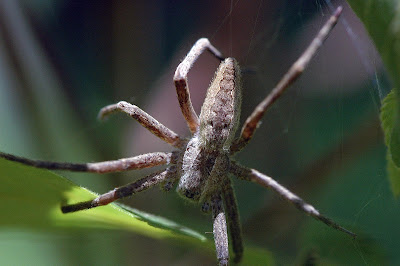 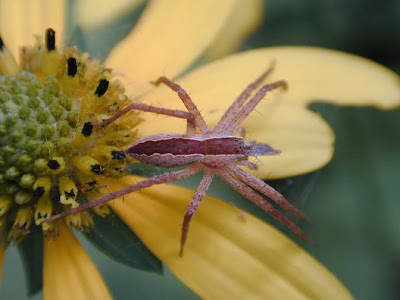 Here's one of them, Pisaurina mira. Some of the Fishing Spiders are adept at catching tadpoles and fish larger than them. 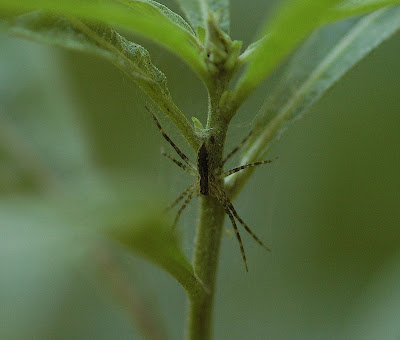 This is "probably" the same species as above, but there's a problem. It's an immature. Young spiders are difficult if not impossible to identify correctly. 90% of the spiders we see in the field are immatures. Only about 5% of them show the typical ID characters used to identify adults.


There are 76 species of Salticids or Jumping Spiders in Ohio. This is the only one I've ever shot. I need to get busy. The Emerald or Golden Jumper, Paraphidippus aurantius, is easy to recognize, once again, if you have an adult. Jumping Spiders have very intricate mating behaviors. Yes they can jump. Often when approached, they raise their front legs like a Mantis, and may even lunge at you. 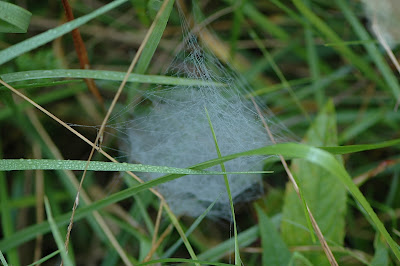 Don't sweat the small stuff. Get down on the ground and investigate the tiny guys. This is one of the Sheetweb Spiders. 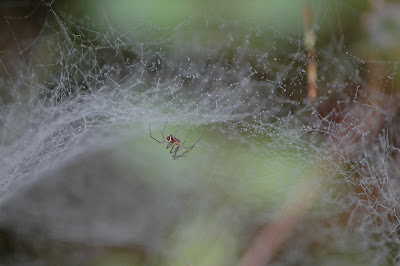 Notice the curvature to the web design inside. This is the Filmy Dome Spider, Neriene radiata. 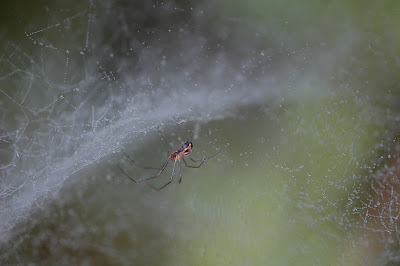 I'm learning that even a closeup like this is not close enough. From now on I will take shots from every angle, and try to get as close to the eyes as possible. The eye arrangement differs among many of the families. 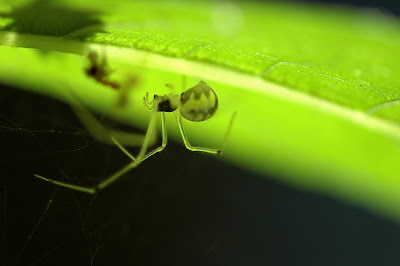 The smallest spider I ever photographed was this. I had no idea where to begin. Thanks to the expert, I now know this is Theridion frondeum, a Cobweb Weaver. There are 12 species from this genus in Ohio. I'm not sure I want to tackle the other eleven! 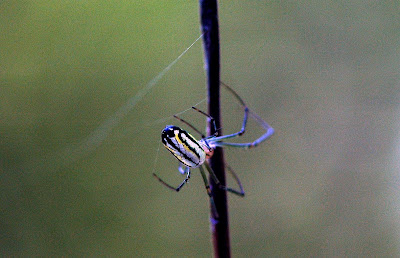 The Orchard Spider, Leucauge venusta. It's mixture of yellow, black, white, green, and orange, make this species quite ornate. You have probably literally run into it many times walking in forest understories. It's a member of the Tetragnathidae, the Long-jawed Orb Weavers. 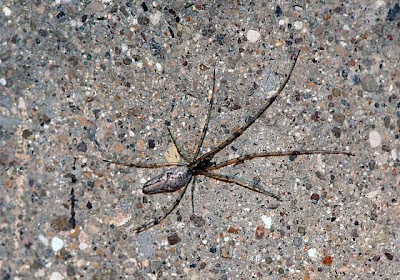 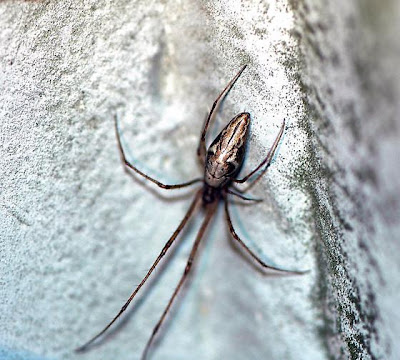 Here is another Long-jawed Spider. Either Tetragnatha versicolor or T. guatemalensis. You can't tell which from the pictures.

I got Richards attention when I pointed to a certain picture in his book and said that I photographed this in Ohio. His eyes lit up and said that would be something, since it's only found in Florida. After checking my photos, I realized it was these. I was wrong. I'm a beginner, he forgave me. 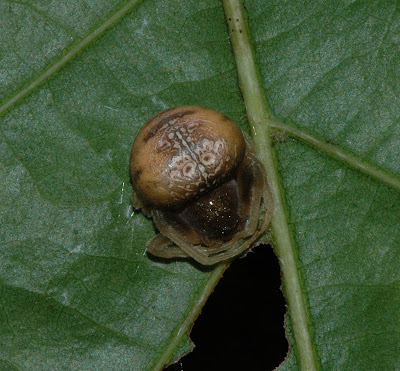 But I redeemed myself when I sent him this photo. I first posted on this back in 2011. It is a Bolas Spider, most likely Mastophora bisaccata. If so, there are less than a half dozen records of this ever documented in Ohio. There are three other Bolas species in the state. Look up the behavior of these spiders, they will amaze you.

If you have followed my blog regularly, you know how thrilling it is for me to find rare or unusual things. It's even more special when others get equally excited.

Once again I want to thank Richard Bradley for all his help. This is his latest book, and I highly recommend it. Spiders do not have hard exoskeletons. They can not be pinned and displayed like insects. Most are locked up in museums, stored in alcohol vials. Dr. Bradley estimates of the 4700 species in North America, only 30% have ever been photographed in the field. Are we up for the challenge?
Posted by DenPro at 8:15 PM 15 comments: